Rice belongs to the sweet grass family (Gramineae) and is a type of cereal originally from East Asia, the term „cereals“ covering the grain fruits of cultivated grasses (spikes or ears in the case of wheat, rye, barley and corn; panicles in the case of oats and rice.

Rice is an annual panicle grass with uniflorous spikelets and is one of the oldest plants cultivated by humans (e.g. for 5000 years in India). It is a „glumed“ type of cereal, which means that the glumes (dry-skinned leaves in the flower area of the grasses) remain stuck to the grain, as is the case with most types of barley and oats and with millet. In addition, the rice grain is also surrounded by a fine, silver-gray to reddish-yellow or red skin, the „silver skin“, over which the glumes are located.

Rice is cultivated under water in flooded fields (requiring artificial irrigation, high yield) and as upland rice (where the land is merely watered).

Depending on the shape and size of the grain, rice is subdivided into three basic grades: short grain, medium grain and long grain. These are further subdivided, depending on the degree of preparation, into: unprepared rice, white rice, broken rice and parboiled rice.

The following rice varieties are of significance with regard to shipment and transport: 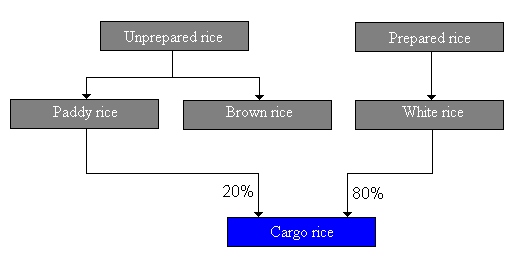 On acceptance of a consignment of rice in the form of general cargo, it should be ensured that the bags are clean, dry and well stitched, to keep the risk of loss as low as possible right from the start.

Rice is dried prior to transport. At a water content of 13%, rice has a storage life of approx. 12 months. However, if the water content increases (> 16%), the rice cannot be kept for more than 20 days.

On an international scale, rice is the most important cereal and serves as a staple food. Rice has its glumes removed in hulling mills and serves to produce flour as well as arrack and sake.

This Table shows only a selection of the most important countries of origin and should not be thought of as exhaustive.

Rice is transported as bulk cargo or as break-bulk cargo in bags (e.g. 100 kg bags of woven jute fabric). Rice is also packaged in smaller 500 g plastic bags and transported in cartons. The packaging size should be so selected that the dimensions of the individual area modules or area module multiples are conformed to the conventional pallet sizes (800×1200 mm and 1000×1200 mm) and cargo units may thus be produced.

Bulk containers, subject to appropriate predrying of the product to approx. 12 – 13%, or passively ventilated containers (coffee containers). There are reservations about both types of container due to the increased risk of water or mold damage.

In damp weather (rain, snow), the cargo must be protected from moisture, since it may lead to mold, spoilage and self-heating as a result of increased respiratory activity.

On acceptance of a consignment of rice in bulk, severe dust formation occurs. Thus, for instance, it is important not to load rice and, for example, expeller in bulk through two adjacent hatches at once.

Hooks must not be used in handling bagged goods as they subject the cargo to point loads, so damaging the bags. Due to their shape, plate or bag hooks apply an area load and are thus more suitable for handling bags.

Tarpaulins, matting, jute coverings, fiber rope, thin fiber nets. Do not use plastic films, as they prevent airing. Use gunny cloth instead of plastic films.

Bagged cargo must be stowed and secured in the means of transport in such a manner that it cannot slip or shift during transport. If loss of volume and degradation of quality are to be avoided, the packages must not be damaged by other articles or items of cargo.

If the product is transported in cartons on pallets, by selecting the correct packaging size or cargo unit (area module or area module multiple) , holds can be tightly loaded (without spaces).

In the case of maritime transport, the IMO (International Maritime Organization) „Code for Safe Carriage of Grain in Bulk“ must be complied with.

The optimum temperature for the development of molds is between 20 and 30°C. Travel temperatures of > 25°C increase metabolic processes and thus self-heating and agglomeration (sticking together).

Where the intrinsic moisture content of the product is too high, there is a risk of mold, mustiness and fermentation, as well as self-heating and agglomeration.

In principle, a certificate is provided for rice cargoes at the port of loading in relation to the intrinsic moisture content ascertained and stowage. This certificate must indicate the average moisture content ascertained. In addition, moisture measurements must be made and recorded on board the transporting ocean-going vessel itself. However, it must be borne in mind that only tests carried out by an independent surveyor will be recognized as of evidential value in any subsequent lawsuit.

Excessively damp rice releases moisture constantly during transport, and wet or damp bags of rice must be rejected upon acceptance of a consignment. It is also important to close hatches in good time if it rains during loading, to prevent the product from becoming damp. Where seawater damage is suspected, e.g. due to damaged hatch cover gaskets, a seawater test should be carried out using the silver nitrate method .

Rice is among those goods which frequently arrive on board not dry for shipment, which can then result in considerable losses. It must also be noted on loading that hygroscopic goods can reabsorb moisture during storage in moist, tropical air. In areas with dry and rainy seasons, the shipment deadline must be noted. For example, if the outward transport of the cereal, which usually takes place in the dry season, is delayed into the rainy season, the water content on loading must be particularly carefully monitored as such late loading has been the cause of a series of losses.

Due to its moisture content, rice has a tendency to rancidity through the formation of free fatty acids despite its low fat content (approx. 1%). This risk is particularly great in the case of brown rice owing to the oil-containing silver skin, which is still attached to the rice grain.

There is also a risk of premature germination of the rice grains due to the effect of heat and moisture.

The risk in particular of water vapor evolution in the case of rice which was excessively damp on loading and the need to avoid self-heating of the product make it essential to ventilate rice sensibly and thoroughly. To this end, ventilation channels should be provided. Due to its greater sensitivity, brown rice requires special care, so meaning that it should, where possible, be accommodated only in ‚tween decks, to allow better airing, if necessary through opening of the hatches.

Rice releases water vapor constantly, which needs to be dissipated by ventilation. However, caution is advisable on voyages from hot to cold regions (e.g. Argentina to Europe):

Rice which is not dry for shipment has a particular tendency to self-heating and the flow of heat from the cargo counteracts external cooling, so resulting in the formation of steep temperature gradients in the superficial layers of the cargo. At the same time, water vapor flows from the inside of the cargo to the surface. In the case of simultaneous cooling of the surface by ventilation, the relative humidity increases in the superficial layers of the cargo. If dry fresh air is used for ventilation, a dry surface layer several centimeters thick is obtained, which creates the impression that the cargo is free of all defects. Beneath this is then a damp intermediate layer of lower grade cereal which is starting to decompose, being stuck together and swollen. Such damp intermediate layers are observed relatively frequently.

In order to avoid cargo damage caused by such moist intermediate layers, the fresh air supply must be restricted when there is an excessive temperature differential between the cargo and the external temperature.

When the weather allows, the hatches should be opened during the voyage, to allow appropriate surface cooling. This type of ventilation should also be carried out in the roads and in port until completion of unloading.

Damage to only a proportion of a cargo of rice, e.g. due to dripping cargo sweat, is as a rule indicative of the damaged proportion having been stored in a dead air zone, where it was inadequately ventilated.

Rice is a living organ in which respiration processes predominate, because its supply of new nutrients has been cut off by separation from the parent plant.

As with other types of cereals, when transporting rice account must be taken of the fact that it is a living vegetable product which should be stored in such a manner that on the one hand it retains its vitality while, on the other hand, its vital functions and metabolic processes are restricted in such a manner that losses of weight and utility value do not occur.

At an excessively high water content in particular, rice has a tendency towards self-heating. Water contents of > 15% and relative humidities of > 75% result in self-heating of the cargo due to hydrolytic/enzymatic fat cleavage.

The heating damage thus arising causes an increased risk of germination (premature sprouting) and considerable depreciation of the product.

Point loads applied for example by hooks may result in damage (tears) to the bags and thus to losses of volume. Plate or bag hooks, which, due to their shape, distribute the load and reduce the risk of damage, should thus be used.

Extended storage in the country of production may result in agglomeration of the product under stack pressure.

Evolution of CO2 due to respiration, especially with excessively damp goods (TLV: 0.49 vol.%). Take care when entering the hold, as oxygen may be in short supply. Use gas detector.

Weight loss, particularly in the case of freshly harvested product, caused by the release of water vapor amounts to 1 – 3% [50]. Loss of volume may also arise due to adhesion of rice grains to the ship’s sides and due to exposure to wind (dust being blown away).

During loading, attention must be paid to inspecting the cargo for granary and rice weevils (recognizable from four red spots on their wing cases), flour beetles, drugstore beetles and spider beetles, as well as for dried fruit and meal moths, rats and mice.

The chewing damage caused by the cereal pests brings about increased respiration in the cereal (hot spots) and this, associated with the metabolic activity of the pests themselves, promotes evolution of heat and moisture, which in turn provide favorable living conditions for molds and subsequently, at very high moisture levels, for bacterial growth.

In addition, a statement should be required from the consignor about any insecticides used. As a rule, rice is fumigated with methyl bromide, but it should be noted that the success of fumigation depends on whether the temperature and fumigation time are adapted to the development cycle of the insect or insects.

Rice is particularly likely to be infested with storage pests if it has been stored for more than two months.

A high proportion of broken grains encourages the development of microorganisms, mites and beetles.

A certificate of origin and health should be required from the consignor.