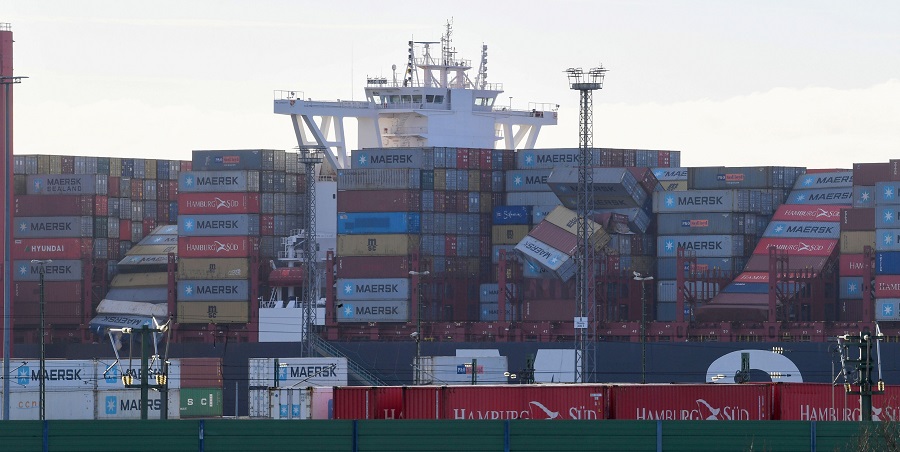 There are six different ways in which ships move in the sea, primarily pitching, heaving and rolling. Lateral rolling motion represents the greatest challenge for stacks of containers. If containers are to be transported safely on the deck of a container vessel, they must be firmly connected to the ship. This is done with the aid of what are known as twistlocks. These twistlocks are inserted into the corner castings of the containers. These corner castings have elongated holes in which the rotating lug of the twistlock engages, locking the containers together. In addition, the bottom two layers of the stacked containers are connected to the ship with lashing rods. Initially, it was common practice to stow stacks of containers on deck in such a way that the individual stacks were connected to each other laterally using special stowage equipment. In contrast to this, nowadays each stack stands separately so that it can be stowed or unloaded independently of neighboring stacks. A ship carrying containers on deck thus transports a kind of „forest“ of independent towers which, in heavy seas, sway back and forth due to the elasticity of the material in much the same way as the ears of corn in a field.

The lashing rods are arranged crosswise in front of and behind each container stack and absorb lateral movements of the stack. Depending on the intended height of the container stacks on deck and their permitted weight, the 5th layer of the stacks are, for example, secured at the bottom by the rods. To allow these rods to be attached, ships have what are known as lashing bridges running across the ship between the rows of containers. The workers can stand on these to work and fasten the rods.

The lashing systems are calculated individually for each ship by specialist companies and are inspected and approved by the classification societies. The results of these calculations are recorded in a Cargo Securing Manual approved by the flag state and in which all details can be found. The weight of the containers is of crucial importance, because the higher a container is in a stack of containers on deck, the less it may weigh.

You can think of this in terms of the weights on a seesaw. On one side of the seesaw is the securing capacity of the lashing system, consisting of twistlocks, lashing rods and turnbuckles, and on the other side there is the weight of the containers. With this seesaw, the side on which the container weight is sitting must always be up in the air. In other words, the securing system must provide more securing force in an emergency than the containers and their weight require. If containers weighing 28 tonnes are located in the 8th layer, where only containers weighing 5 tonnes are actually permitted, the securing balance of the „seesaw“ is massively impacted and the securing capacity is hanging in the air. Applied to the securing system on board, this means that it would be loaded beyond its calculated limits in heavy seas and would fail. The result is that the container stack would sway back and forth in the swell and would lean against the neighboring container stacks. This would in turn overload their securing systems, which already have their hands full holding their own container stacks, and they would therefore also fail. The obvious consequence is a domino effect, such as the one seen recently on the the MSC Zoe.

However, the securing balance on our seesaw can also be disrupted by the cargo in the container itself. This is because the securing systems on board ships are calculated on the assumption that the dynamic behavior of the cargo is neutral. Static masses are assumed for the containers, and it is assumed that this mass always acts at the same point in the container. If a cargo weighing 30 tonnes is inadequately secured in a container, it will break loose in a rough sea and bang from side to side in the container. This violent sideways motion has the same effect on our securing system as a wrecking ball on a house. If the bad weather lasts long enough and the ship’s movements are violent enough, the securing system will fail and cause a domino effect similar to that described above.

The securing systems of a container ship are designed according to longitudinal, lateral and vertical acceleration values, which are calculated using empirical formulas of the classification societies. These formulas are based on swell statistics and transfer functions for ship behavior. Because container ships are still evolving in terms of size, speed and container stowage height, these formulas are also constantly being revised. However, they never show the worst case scenario, and instead represent assumptions where there is only a very low, but generally accepted level of probability that they will be exceeded.

The actual amount of acceleration caused by swell will depend on the characteristics of the ship and the swell itself. As a rule, the larger the ship, the less likely it is to be caught in seas that will cause it to move violently. Unfortunately, there is an important exception to this rule in respect of rolling movements. If small stimuli, even from relatively mild seas, strike the ship time and again at something even approaching a frequency that is in sync with the ship’s own roll oscillation, which is a function of its stability, the oscillation will be reinforced. This is known as resonance and works in the same way as children working a swing ever higher. This results in large roll angles and large lateral acceleration.

It is easy to see that such resonance can occur in particular when the swell strikes the ship transversely or at an angle. But there is also a special form of rolling motion, which can occur due to the periodic fluctuations of the ship’s stability in a longitudinal swell, i.e. when the waves come from the front. Due to the stability parameter, this form has been called parametric excitation. It is considered by practitioners to be particularly insidious, since it had previously been believed that rolling oscillations could be minimized by steering into the swell.

Technical aids for the early detection of resonance of any kind are under development, but a decisive breakthrough does not yet seem to have been achieved. 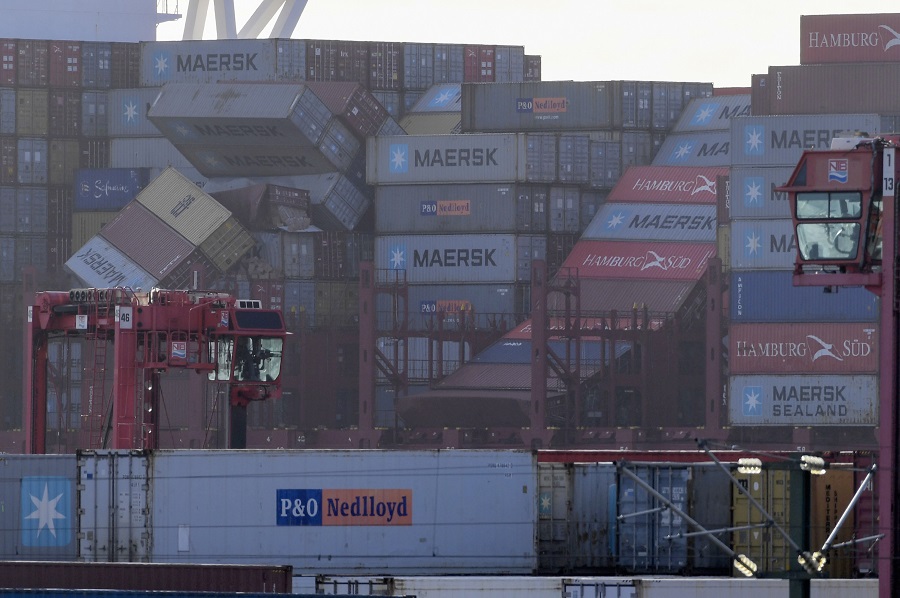 On average, between 450 and 650 containers are lost on the world’s oceans every year, which is only a millionth of the total number of units transported. But if they are lost close to the coast, as was the case with the MSC Zoe, the cargo being washed ashore can cause major damage and attract unwelcome publicity. Hazardous goods can also be a threat to ecosystems and people. The reality is that such accidents are to be avoided if at all possible, and a great deal of effort is therefore being invested in exploring and clearing up the last of the unknowns. But container ships are getting bigger all the time, which brings along new problems. The container itself is part of the problem, as it experiences loads that test it to its limits. The onboard lashing systems, on the other hand, will generally have a 100 percent safety margin. But it only takes one link in the securing chain to fail and loss of cargo could well be the consequence. The way in which the cargo is secured in the containers would have to be monitored more closely, as would the weight of the containers themselves, although the verified gross mass (VGM) should long ago have ensured that this was correct. So there will always be a residual uncertainty, and this needs to be further reduced.