This month, we have an interesting case to discuss: A lot had been done correctly, but, as so often, things were not taken to their logical conclusion, and much was also left undone. 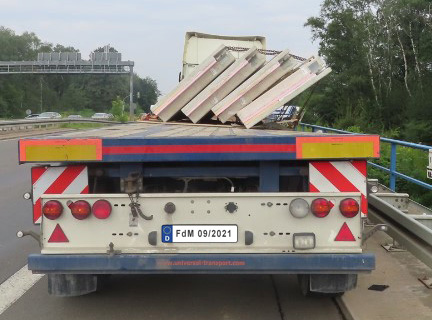 Figure 1 shows the result: Four concrete elements weighing a total of 18.1 tonnes have tipped to the right and are now hanging there in the tie-down lashings, some of which have become direct lashings, thanks to the changed geometry. It is very fortunate that nothing worse happened. The way that the loading bed has twisted is an indication of the tremendous forces at play here. 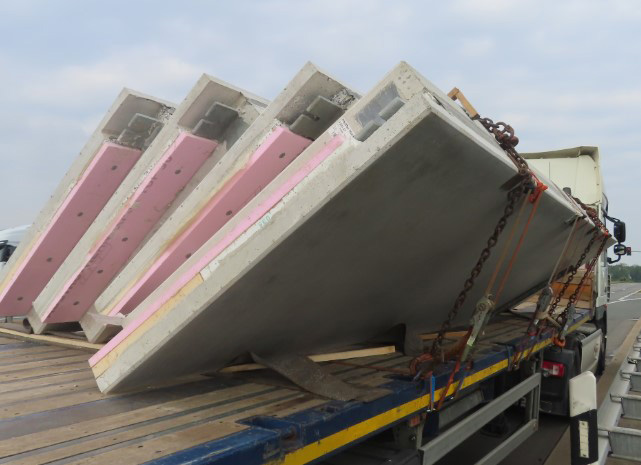 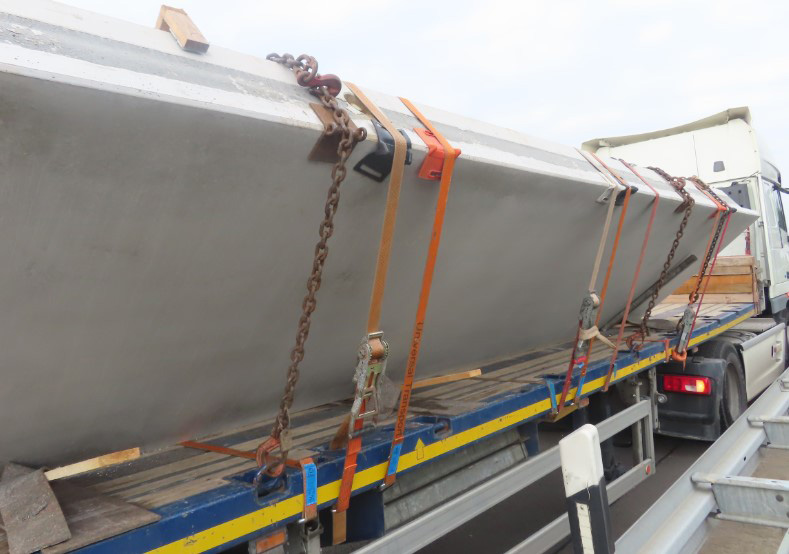 The fact that a mixture of different types of load securing equipment, namely belts and chains, was used is not really a problem, because most were used as tie-down lashings. In this case, the pre-tensioning force can simply be added together, although we would prefer to see only one type of equipment being used here.

A loop lashing is a type of direct securing, where the equipment used is able to provide its entire lashing capacity – 2000 daN per run for commonly used belts. The only drawback is that this securing effect only applies in one direction. 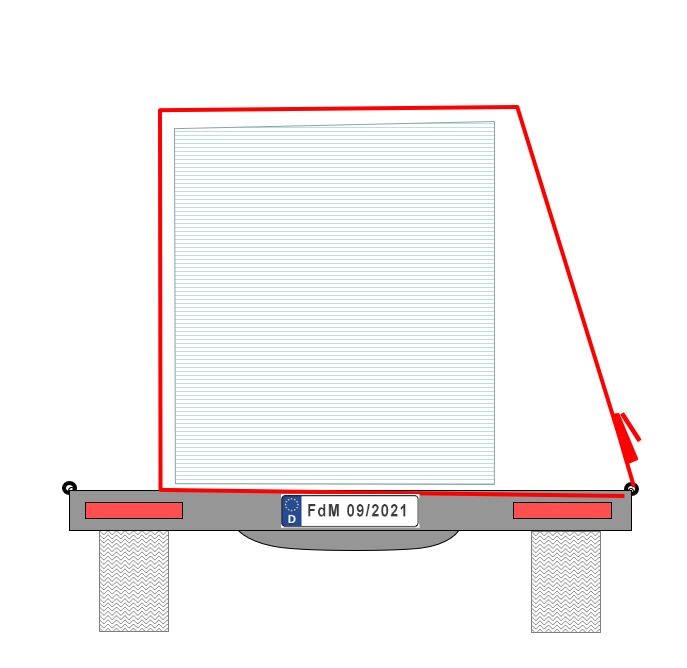 The effect of a tie-down lashing is to artificially increase the weight of the load as a result of the pre-tensioning force, which in turn increases the friction between the load and the loading surface. This method of securing a load is often not the best choice for heavy loads and/or low levels of friction. The greatest advantage of tie-down lashings, occasionally referred to as “friction lashings”, is that their securing effect applies in all directions. In other words, to the front, to the sides and to the rear. 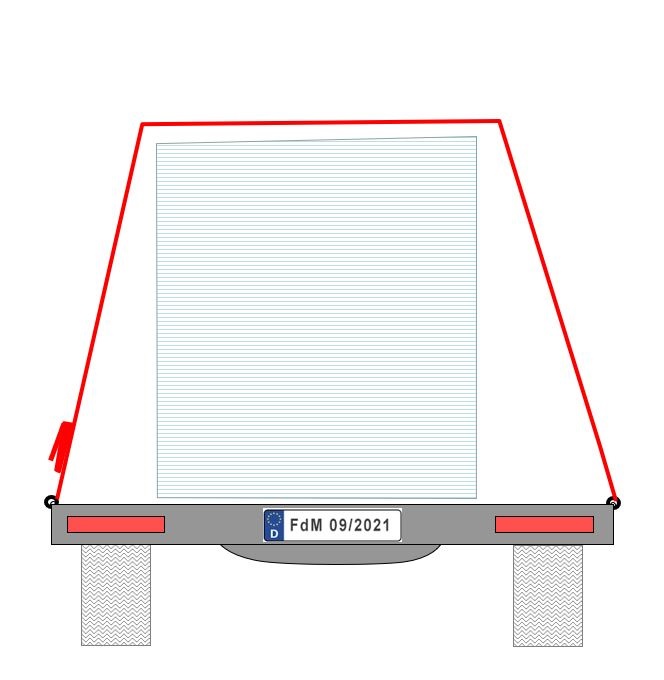 To assess the way in which this load was secured, we carried out a calculation using the simplified Formula 17 as laid down in DIN EN 12 195-1. To do this, we only included the tie-down lashings in the calculation, not the loop lashings. If you want to see the calculation, visit this link.

This calculation showed that it was possible to secure a load with a mass of 7855.62 kg with these tie-down lashings.

The method of securing using tie-down lashings that was used here only provided a fraction of the necessary securing force. Although it is theoretically possible to secure the load with tie-down lashings, we believe that this method of securing would be extremely cost-ineffective. It is possible to secure the load in a way that is far superior to the one attempted here and that also requires a lot less effort. One striking thing about the way the driver secured the load is that he used three direct lashings (loop lashings) against movement to the left. Loop lashings such as these are precisely what we would recommend for such loads.

It remains a mystery why the driver did not use this securing method against movement to the right. Perhaps he overestimated the stanchion that was used at the front of the vehicle, which is sadly a common mistake. A stanchion such as this has a securing capacity of between 3000 daN and 4000 daN, but only just above the loading bed. This good securing capacity decreases rapidly with height. Since the concrete elements were leaning against the top of the stanchion, the stanchion had no chance of preventing tipping, because its securing effect was reduced to a few hundred daN at that height.

Stanchions such as those used here should be subject to loads in their lower portion, as close as possible to the loading area. As a rule, they are not suitable for securing a load against tipping. On a positive note, edge protection was used pretty consistently when securing this load. It was missing from only one belt. 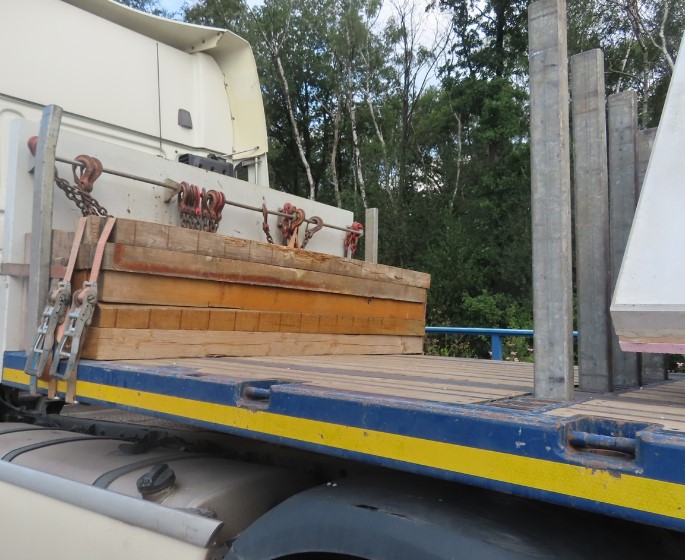 The way in which the load was secured to the front, on the other hand, left a lot to be desired. Assuming that the anti-slip materials were correctly placed underneath the load (above and below the lumber dunnage, so that the load was separated from the loading surface in terms of friction), the coefficient of friction μ of 0.6 would provide the lion’s share of the securing effect. This would mean that 0.2 x 18.1 t = 3620 daN of securing force would remain to be found.

Unfortunately, we were not told the nominal pre-tensioning forces of the lashing equipment. We shall therefore assume an STF of 350 daN and generously double this for the tie-down lashings (seven in number) to obtain 4900 daN of pretensioning force. The angles are good, so we shall not make any deduction. This results in the following calculation: 4900 daN x 0.6 = 2940 daN of securing force. There is now a shortfall of 680 daN of securing force to the front. It could be that the chains had considerably more pre-tensioning force than we assumed. If this was the case, then the securing force to the front would have been sufficient.

But that’s not the point of what we are saying. There were four stanchions in front of the concrete elements. And there was sufficient strong lumber stacked against the end wall. Instead of being stowed against the end wall, it could also have been placed against the stanchions to easily give the load a tight fit to the front. This would be a scenario that would play to the strengths of the stanchions. This is because their effect is greatest just above the loading bed and the stanchions also have a rectangular cross-section, which further enhances their longitudinal strength. We would calculate 4 x 3000 daN, which would be 12,000 daN for virtually no effort with this load scenario. It’s a pity that this securing option went unused.

The three loop lashings mentioned above were a good idea, but their counterparts are missing, and in fact they made matters worse by the fact that the pre-tensioning force of the loop lashings acts on the right-hand side of the vehicle, thus promoting a tendency for the load to tip to the right, which is what happened.

How would we secure this load? 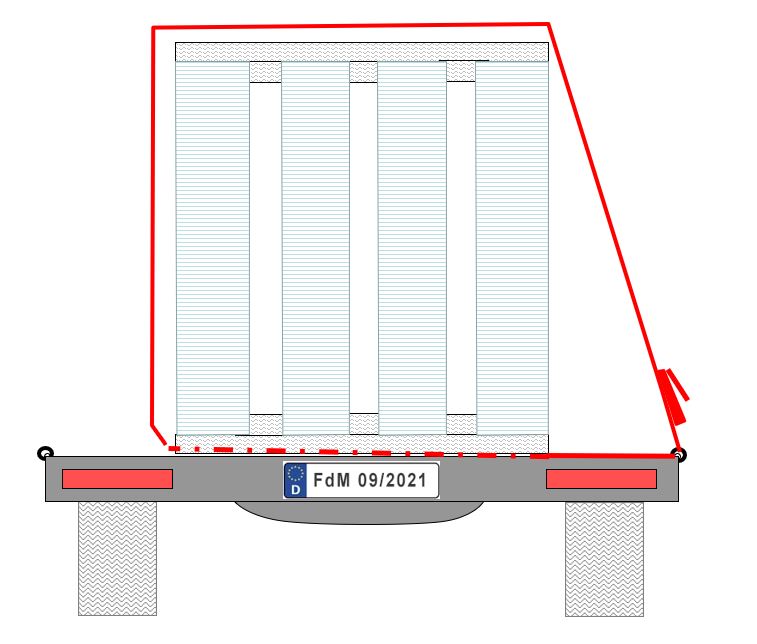 Diagram 3 shows a loop lashing. To secure the load to the sides properly, each loop lashing must be provided with a counterpart acting in the opposite direction. Four of these lashings are required on each side. 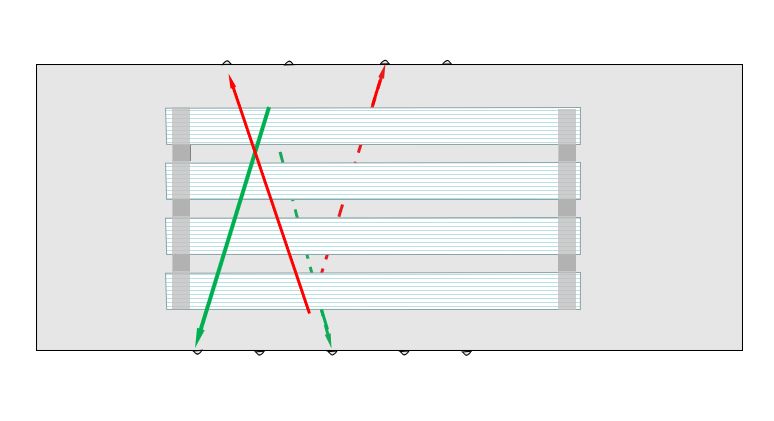 This sketch shows the principle of loop lashings from above.

In the video below (in German only), we show you how to attach a loop lashing properly.