The romance of the open road after the loss of 10 tonnes! 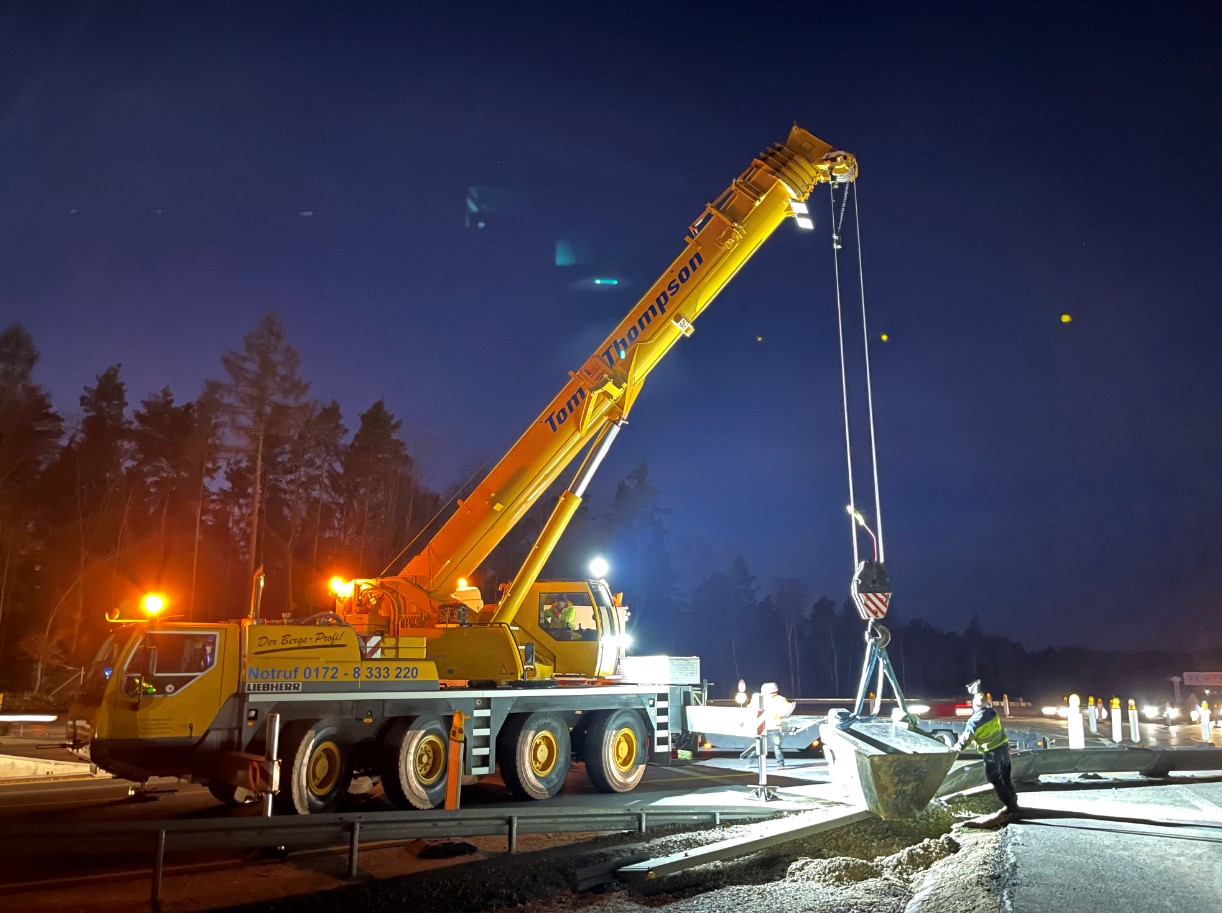 It is not as if our Photos of the Month are always devoid of a little romantic atmosphere. We have André Munker to thank for this idyllic picture, or rather a truck driver who didn’t take load securing very seriously.

The story is quickly told. A supplementary 10-tonne counterweight from a mobile crane was being transported with no sign of any anti-slip material and in the sure knowledge that weight alone does a good job of securing. When the truck switched lanes, the counterweight continued on its original path and some cars that were just about able to get out of the way were involved in a minor accident with each other. Which was infinitely preferable to a collision with a 10-tonne lump of steel. 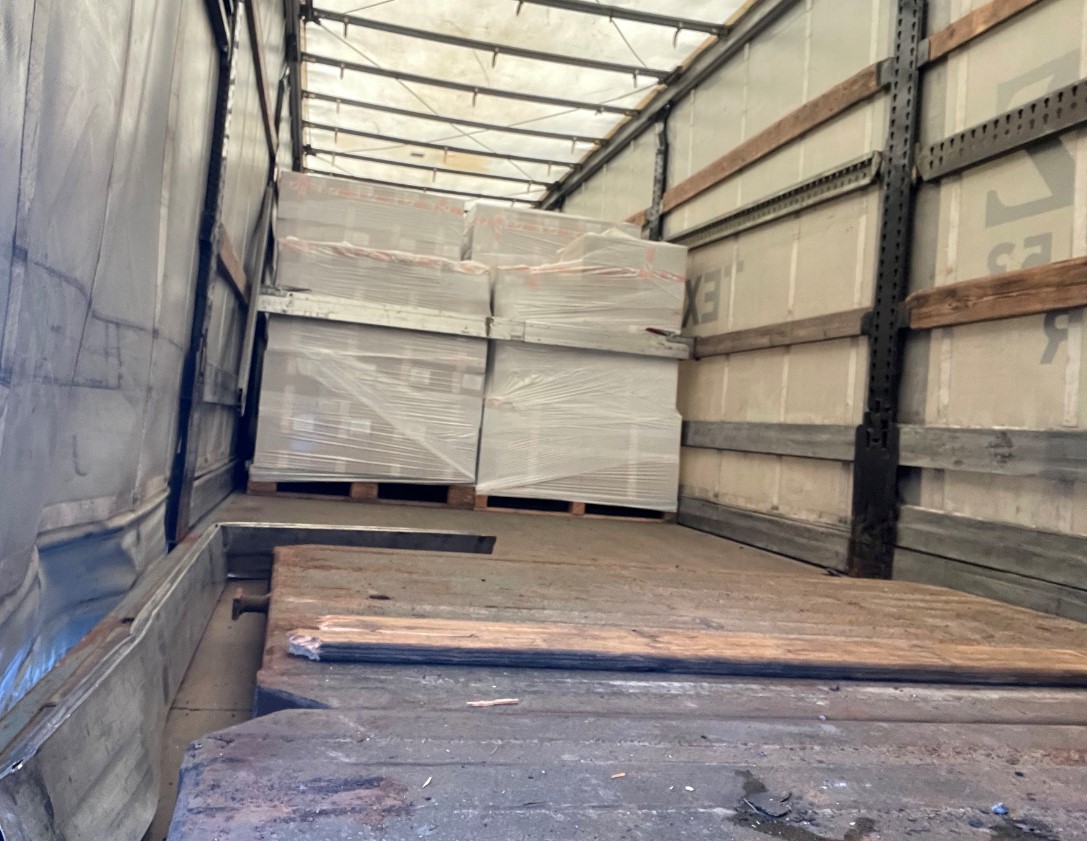 The 10-tonne weight was resting on this steel base plate. Dirt and rust residue adorn the contact surfaces. The weight was secured with a tie-down lashing, i.e. a securing method based on friction. This modest level of friction was archetypally useless. The driver confirmed that he always did it this way. The driver’s complaint to the company was met with a threat of dismissal.

Such pictures fire the imagination and anger of a load securing columnist, who immediately asks the following questions:

How is it possible that a company that sees its job as handling heavy cargo can subcontract a transport company that makes such catastrophic mistakes in load-securing? Which in turn leads us to ask:

But let’s get back to the facts of how this load was secured. 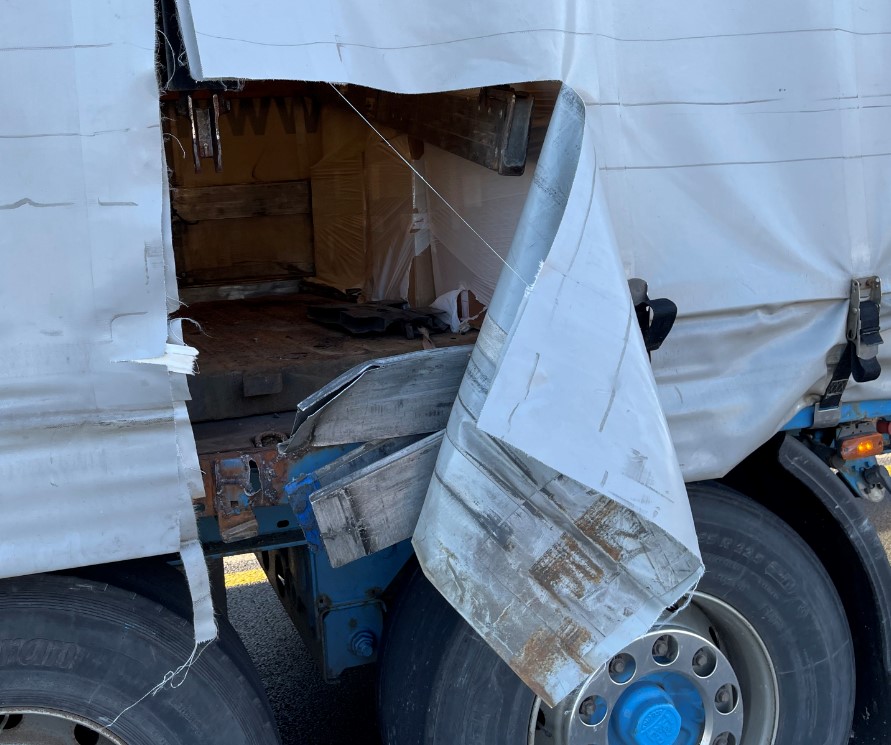 The hole in the tarpaulin seems relatively modest considering that a 10-tonne load has passed through it.

We would use sufficient anti-slip material (suitable for heavy loads). The supplementary counterweight features a number of attachment points. Two of these are used to attach it to the side of the actual counterweight. Load securing equipment can be attached to these attachment points. If lashing belts are to be used, we recommend a sling so that the belts are not constricted when passing over the edges of the supplementary weight. This is not necessary if chains are used.

The steel plates at the bottom, which are used to distribute the weight of the crane outriggers on the ground, have been cleaned and are resting on sufficient anti-slip material (suitable for heavy loads). Two pieces of heavy rectangular lumber, with anti-slip material on both sides, are then placed on these plates. The four loop lashings for the 10-tonne supplementary counterweight are then laid out. After that, the supplementary counterweight can be loaded. The four loop lashings (two on each side) ensure that

1. the supplementary counterweight is subject to a minimum securing force to maintain friction and

2. the supplementary counterweight is held exactly in position by the direct lashings.

Critics might say that we are adopting a belt-and-braces approach here. That’s true, but the extra work involved compared with two simple tie-down lashings, which would have been necessary anyway to maintain friction, is minimal, and the resulting benefit in terms of securing is many times greater. The loop lashings restrain the supplementary counterweight laterally in each direction with a force of 8000 daN (minus the angles) in addition to the friction. This is secure and involves only a little more effort than two tie-down lashings.

Securing to the front is now taken over by the load securing equipment, which is attached to the lifting/attachment points. Because we still need a securing force of 2000 daN, we would prefer to use a chain passed around these points and attached to both sides of the vehicle. If good angles can be achieved, one chain may be sufficient. If we have to make do with belts, a lifting sling is placed around the lifting/attachment points so that the belts can be passed around it in such a way that the belts are not constricted at the edge of the supplementary counterweight. If it is not possible to attach a belt cleanly and without constriction, a second belt must always be used to be on the safe side. The securing equipment (chain or belt(s)) must be arranged in such a way that the force is distributed over both sides of the vehicle so that the weight cannot twist when subjected to a load.

The fact that the supplementary counterweight on top is well secured and the steel plates underneath are resting on sufficient anti-slip material also ensures that the plates are secured.

Your load securing columnists wish you a safe and secure merry month of May.