A hole in the wall

The story is quickly told: Bundles of pipes weighing a good 24 tonnes are on their way, having been secured with tie-down lashings, with no anti-slip material used and not loaded as a tight fit to the front. The articulated truck had to brake, but the bundles of pipes had no idea that they should have braked as well (indeed, how could they have braked on the slippery loading bed). So they slipped around 4 meters to the end wall, where they smashed a large hole and then cut through the compressed air lines for the brakes. 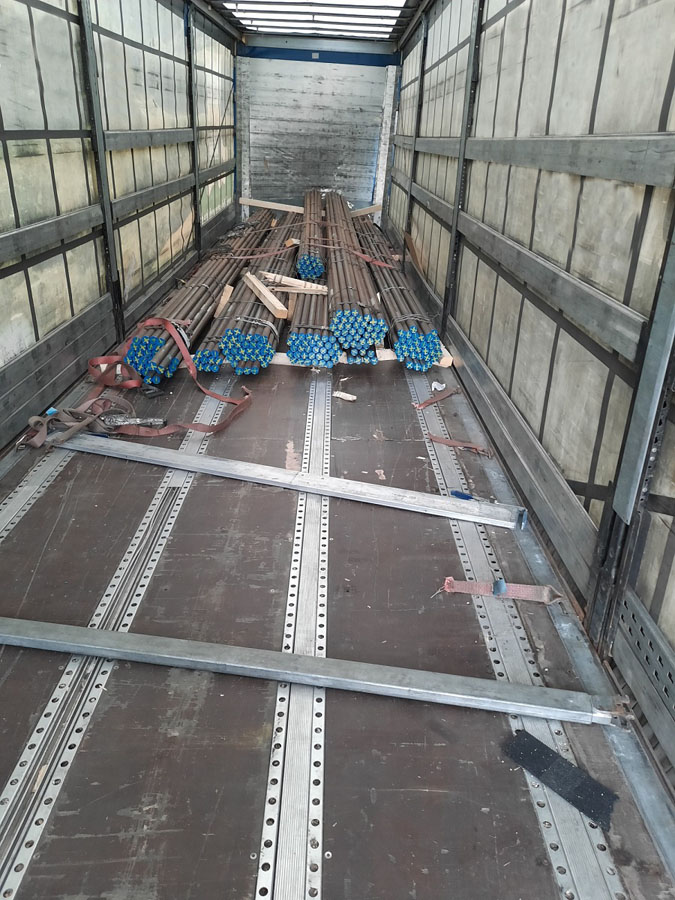 As we said, the load slipped for a considerable distance and some of the tie-down lashings, which were attached at very shallow angles as a result of the shape of the load, were sliced through or torn. Because the pipes were bundled using wires and steel straps, the belts can be cut through in this way when the load slips through them. 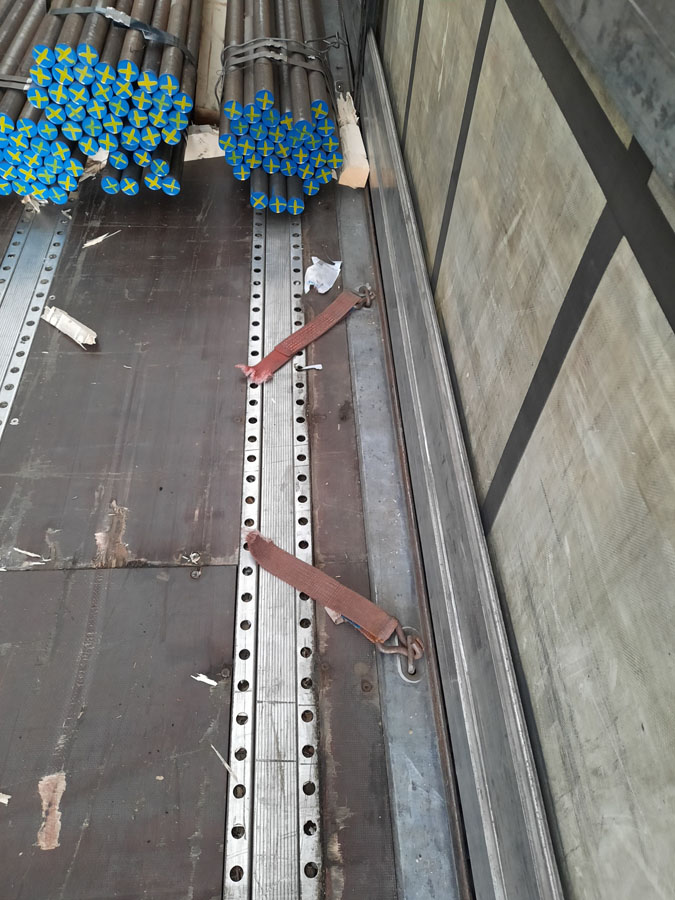 The belts are a testament to this harsh treatment. The ends that have been cut off suggest that they have been partly sliced through and partly torn. 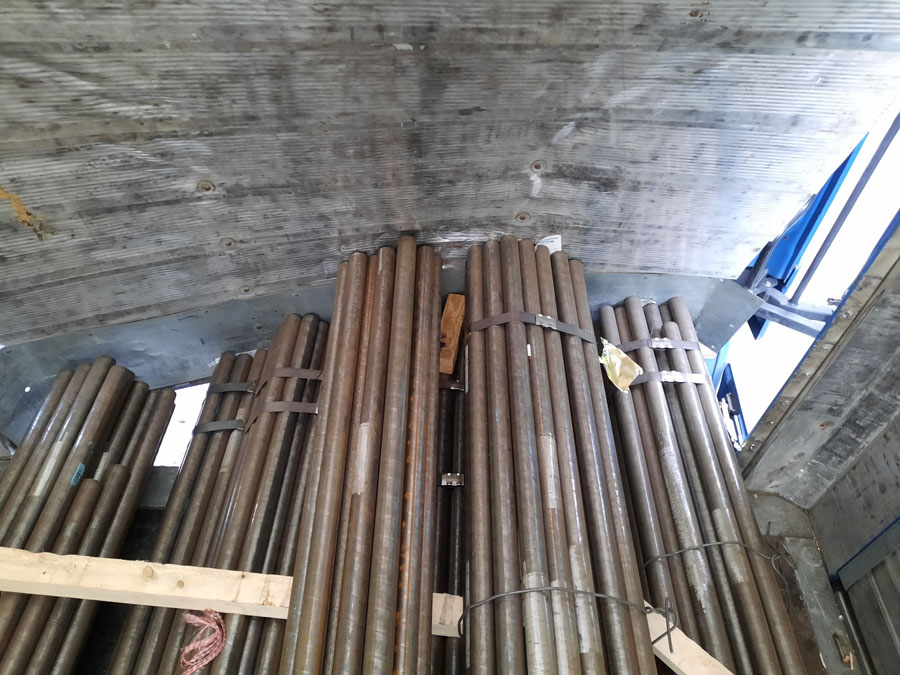 The end wall is proof of how easily the load was able to slip, how ineffective the “load securing measures” were at stopping it and the sheer amount of energy that was still present – enough to open up the end wall. 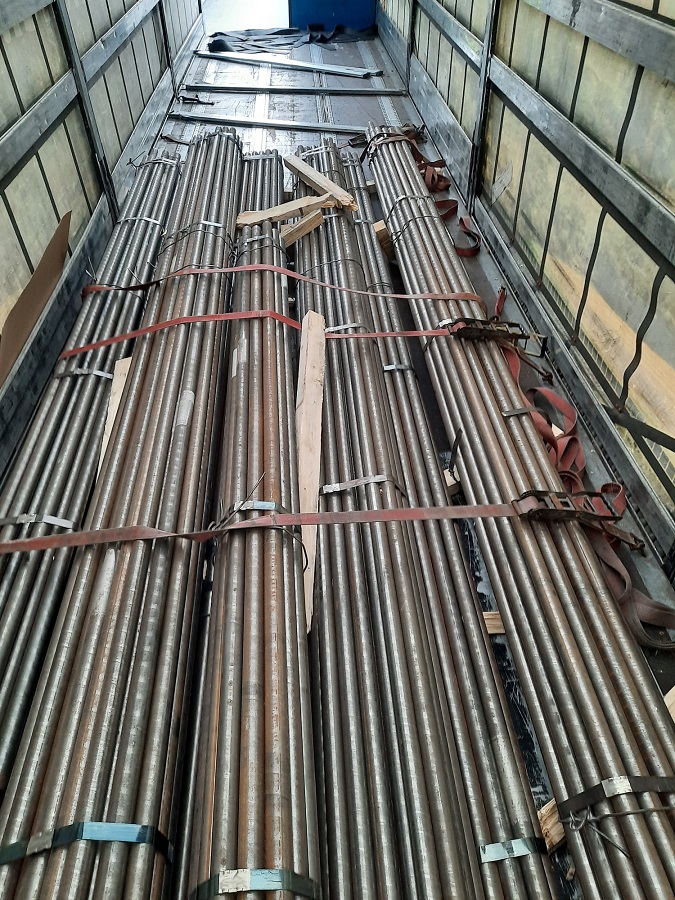 A few of the belts remained intact, either because they were not adequately tensioned, or because the moving load loosened them enough to allow the wires and/or steel straps to simply slip past. This photo clearly shows the gaps in the load between the individual bundles. If the load is able to slip inwards when subjected to a force, the outer surface of the load block becomes smaller and the belts become loose. 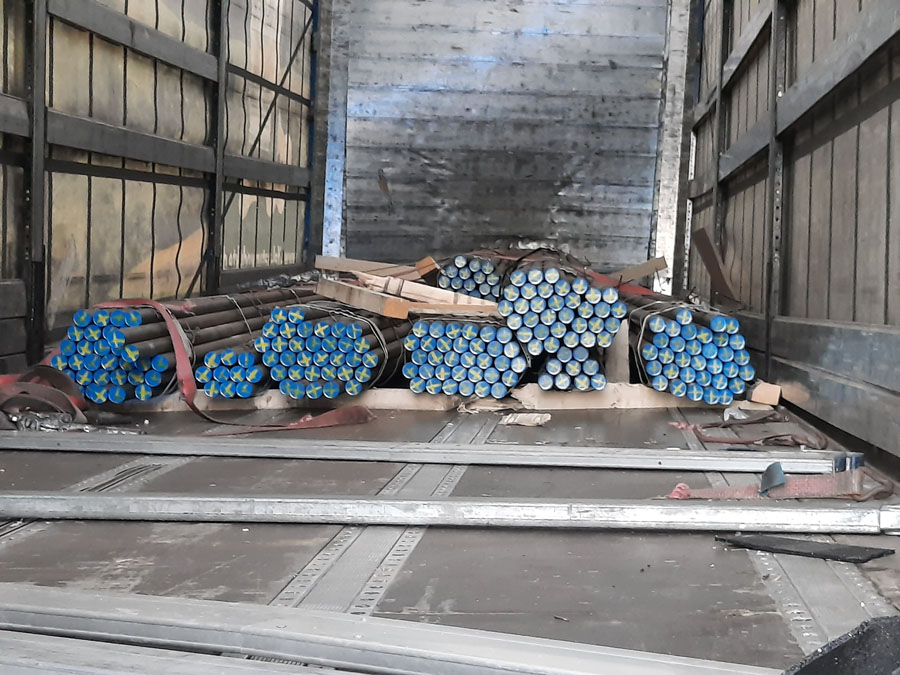 This photo shows the load in its final position, after it has slipped. Even though some of the rectangular dunnage is in a frightful state, the load did not roll over it. Instead it slipped along the loading bed complete with the dunnage. This is a clear indication that the friction of the pipes on the dunnage was far greater than that of the dunnage on the loading bed. There are times when it makes absolute sense for a loading surface to have a low level of friction. This allows cargo to be pushed from one side to the other with a forklift truck during loading without doing permanent damage to the loading bed. But if the loading surface is smooth, using tie-down lashings as the sole means of securing the load is both uneconomical and foolish. Material that enhances friction is available for this very purpose (anti-slip material). 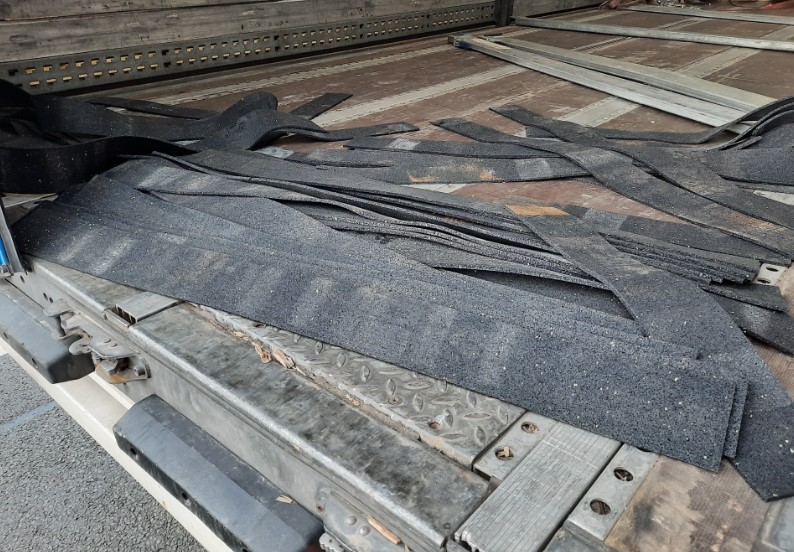 And there was plenty of precisely this material on board the vehicle. We have no idea why it wasn’t used. Perhaps those responsible were relying on the weight of the load. After all, anything that is too heavy to be moved by hand doesn’t need securing, does it? At least that is the common misconception.

Important: Weight (mass) does not secure a load!

But friction and a tight fit can. Friction can be artificially increased by using a tie-down lashing. But that has its limits when dealing with heavy loads.

It would certainly have been helpful if part of the load had been loaded as a tight fit against the end wall. In this case, we would have “padded” the end wall with stacked squared lumber. This would have protected the end wall and distributed the forces acting on it. We would have placed the load on anti-slip mats. These would, of course, have been placed both under and on top of the dunnage. Four loop lashings (two from each side) would have taken care of securing the load to the sides Advantage: The measures taken to secure the load to the sides are generous, because it is possible that the load may roll, and the loop lashings provide the minimum level of securing that ensures that the friction is effective.

At the back of the first, smaller, block of the load, we would again have stacked squared lumber, as far as possible as a tight fit to the first block. If this was not possible, for instance because the bundles of pipes were of different lengths, we would have built an artificial end wall from squared lumber and secured it with two loop lashings attached crosswise. To do this, it is necessary to leave gaps between the dunnage, and the belts (not chains) may have to be protected against the sharp edges of the pipes and the materials used to bundle the pipes. Once again, two loop lashings are used to secure the load to the sides. The load is adequately secured to the rear (0.5) by friction and the minimal level of securing. 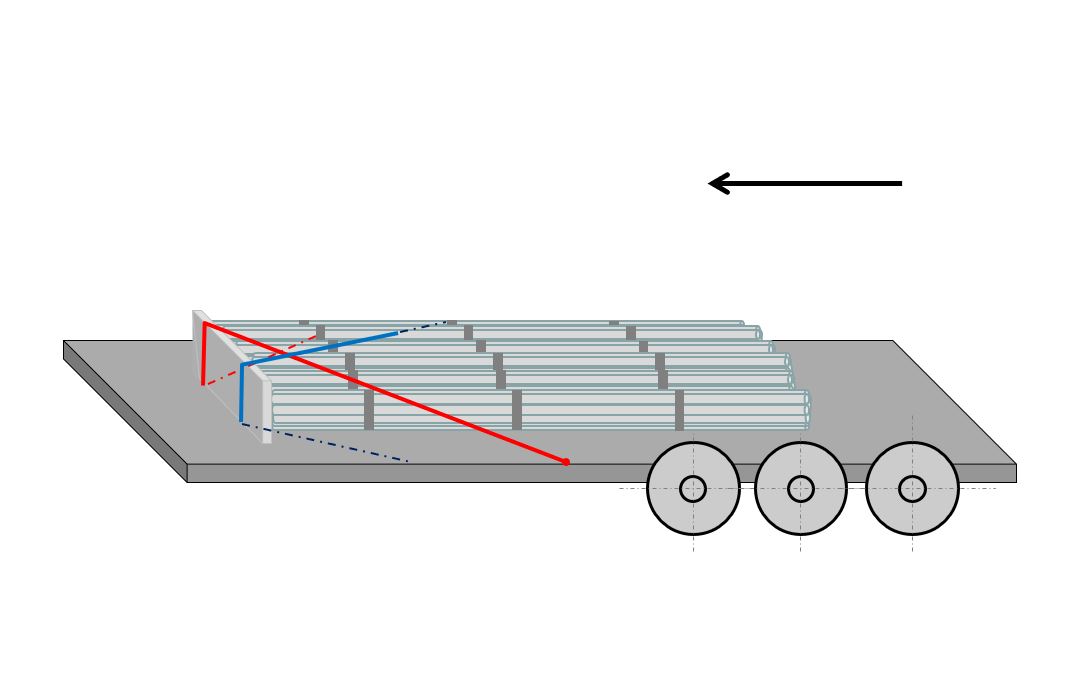 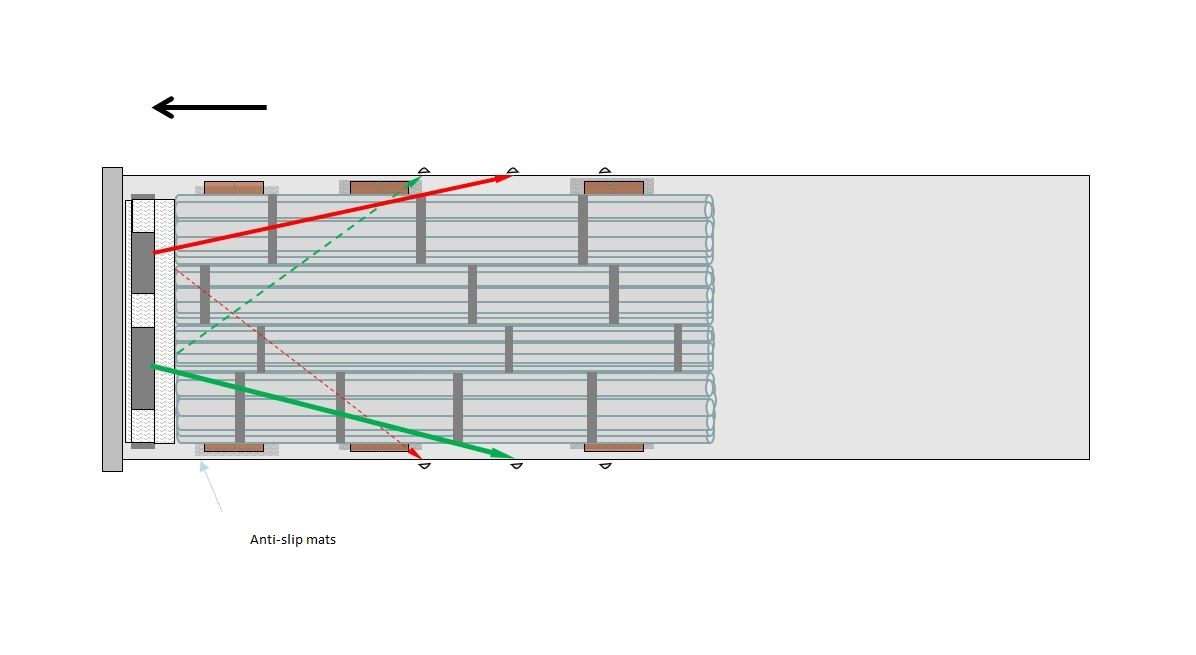 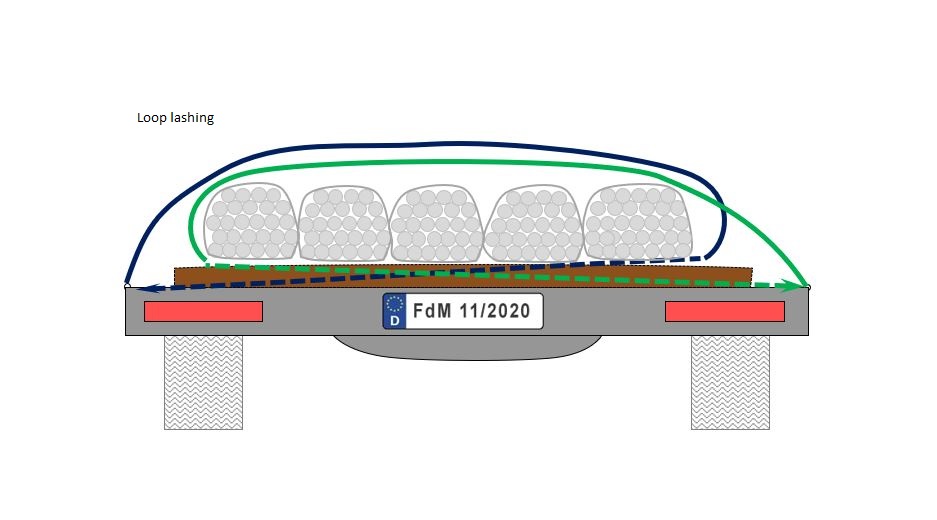 How much does an end wall have to withstand?

Summary: If the end wall is capable of providing 5000 daN of securing force, the suggested securing method is safe for this consignment. If the second load block, which is larger than the first (for reasons of load distribution) is restrained with a further two loop lashings, almost 8000 daN of additional securing force is available (minus the angles, which should be as acute as possible). We of course recommend this securing method. After all, it is always best to be on the safe side!