An accident, a shed load and a lot of good fortune 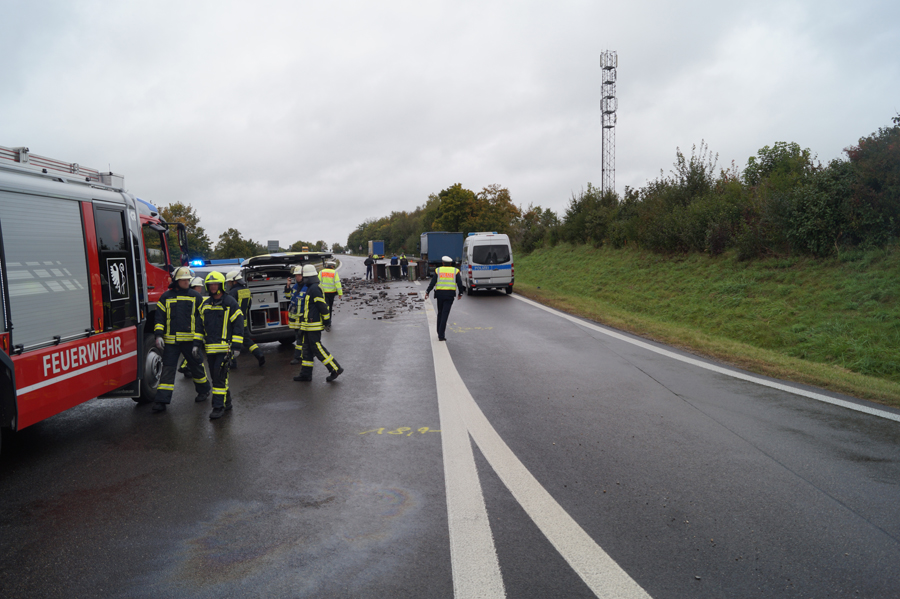 We often see that cargo seems to be treated differently depending on its value. If it is of low value, it is not treated with as much care. But as far as load securing is concerned, the weight of the load, its form and the friction it offers should determine how it is handled.

Figure 1 shows the end of an acceleration lane, and in the distance, we can make out that some kind of load has been scattered over the highway. 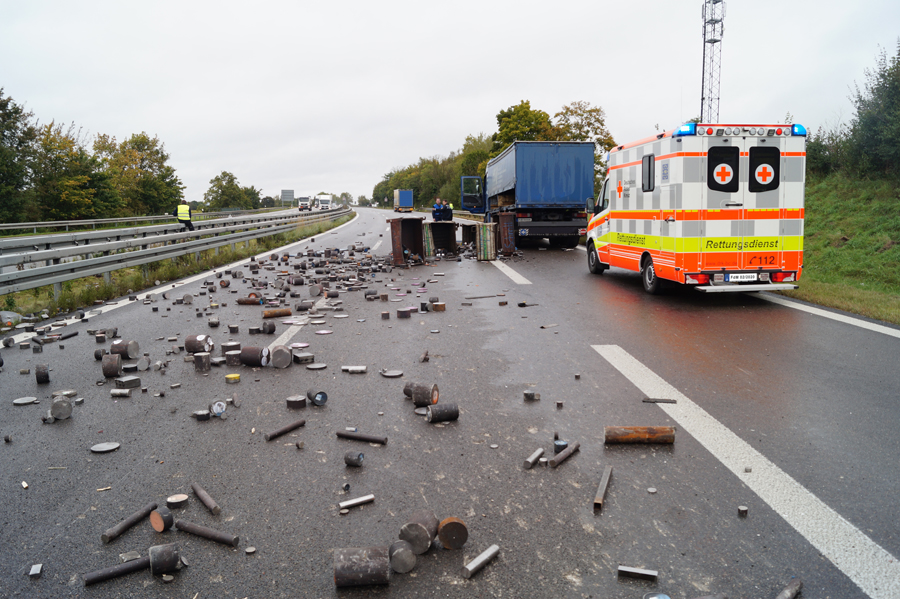 And we were not mistaken! A considerable amount of metal scrap is lying on the road. Most of it is solid cylindrical metal, but a saw blade was also seen there. 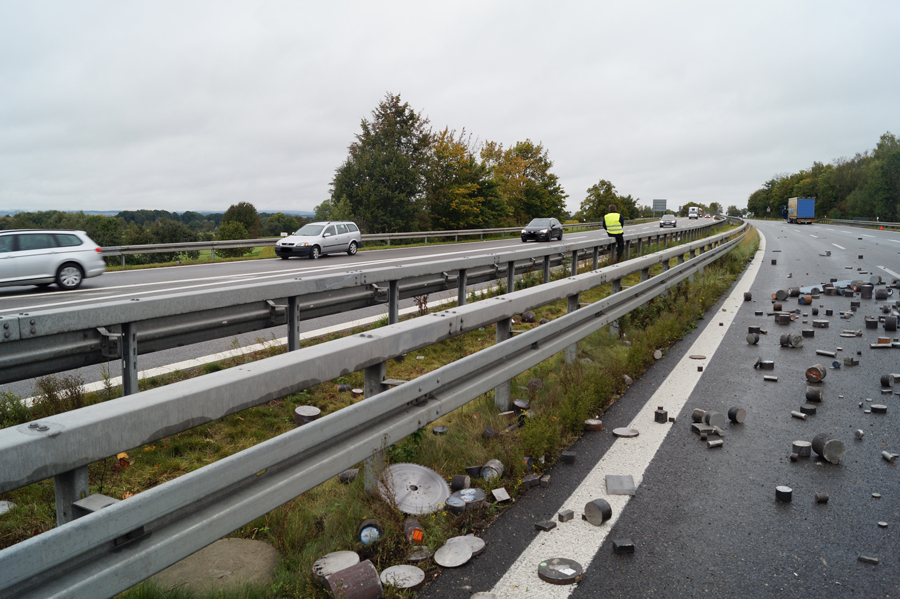 The load has been spread right across the highway and has even reached the opposite carriageway. The gray station wagon on the other side of the road has a flat tire, but was otherwise fortunate. 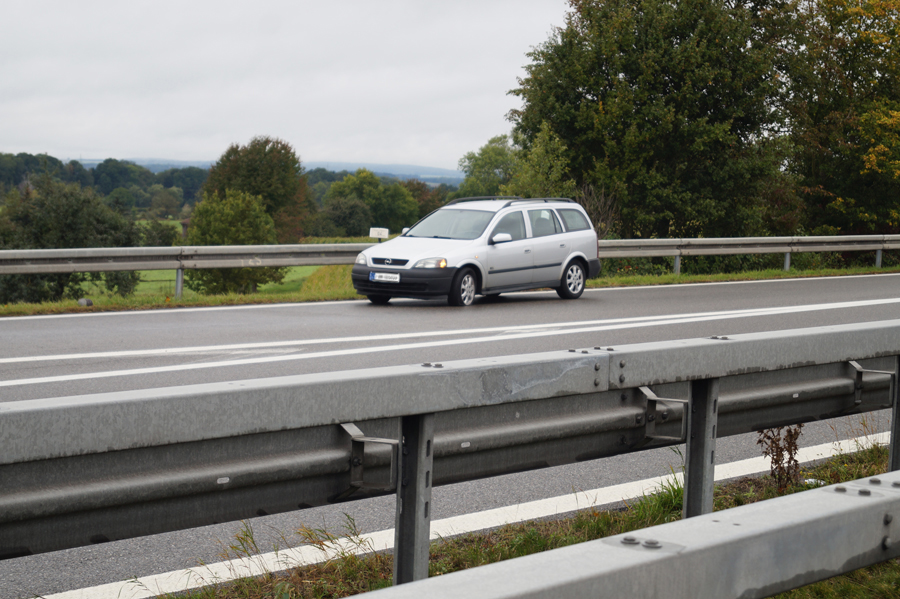 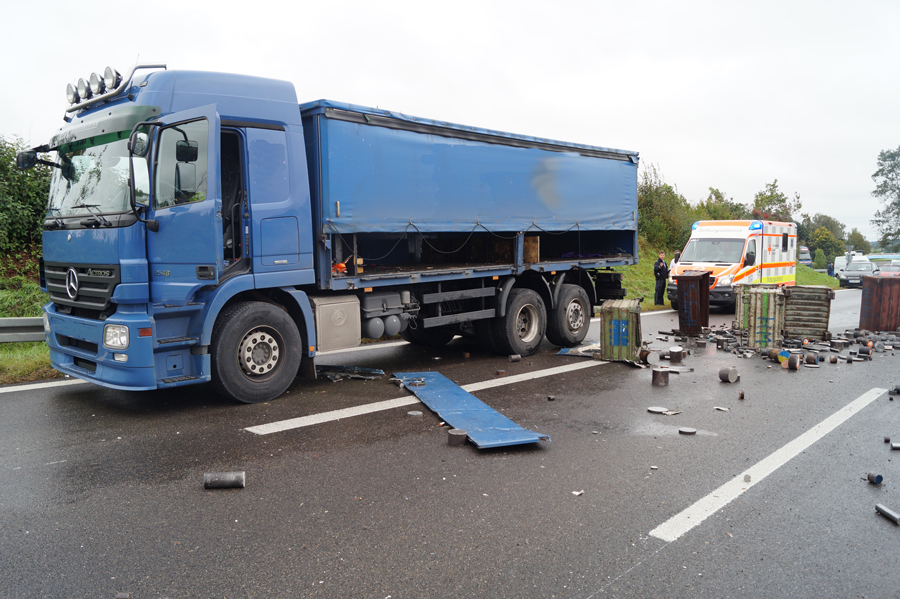 A vehicle that has been specially equipped for transporting steel was carrying six bins of steel scrap. As the vehicle was joining the highway, a typical load-securing accident occurred. The load wanted to continue on the same trajectory at the same speed, in other words preferring to carry straight on rather than accompany the vehicle around the bend.? And because the friction and load securing measures were insufficient to prevent them from doing so, the bins behaved exactly as they wanted.

In fact, we were unable to see any torn or damaged belts, chains or anti-slip mats, and we therefore assume that the side gates were intended to take on the role of securing the load. And they did their best, but were unable to avoid joining the load on the roadway. 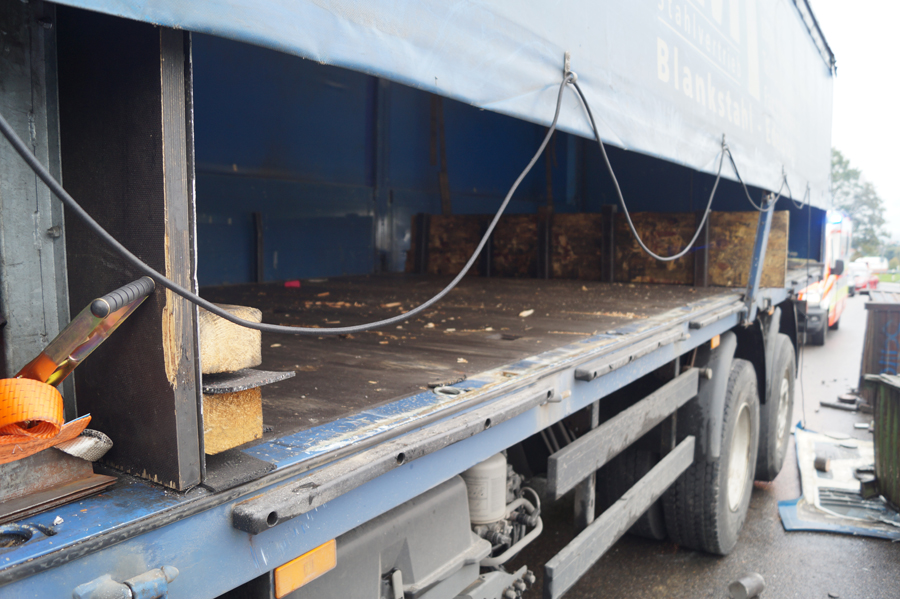 Anti-slip material, rectangular cross-section dunnage, belts, artificial end walls and sufficient stanchion sockets on the loading bed: This is exactly the type of vehicle you want if you are transporting steel on a regular basis. But simply transporting a load of scrap to the scrap metal merchant or recycling depot really doesn’t demand that the load is secured properly, now does it? Besides, nobody can see that I haven’t bothered to secure the load. 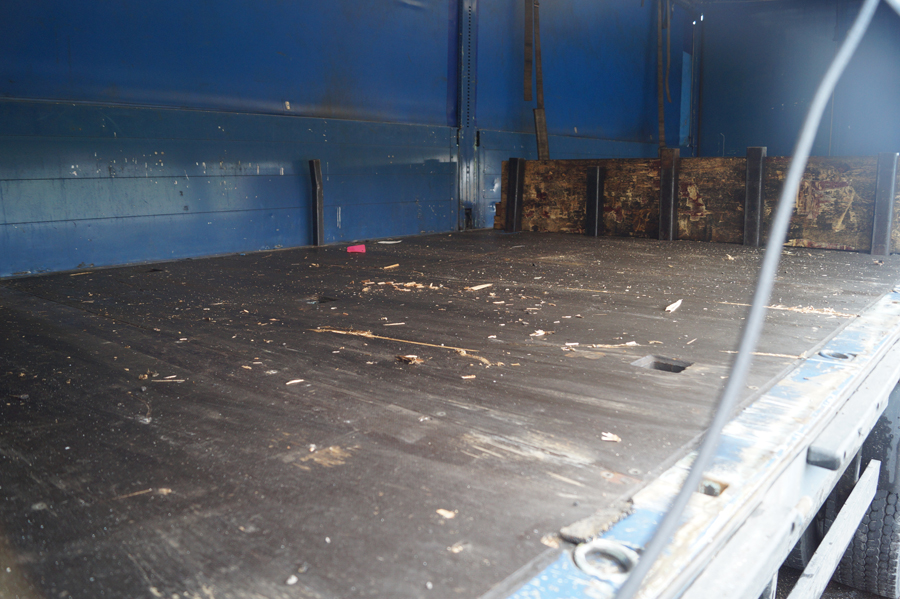 But the scratches and skid marks on the loading surface tell a different story. Each of the bins weighed around 1 tonne, which is bound to make its mark when faced with such lateral acceleration. 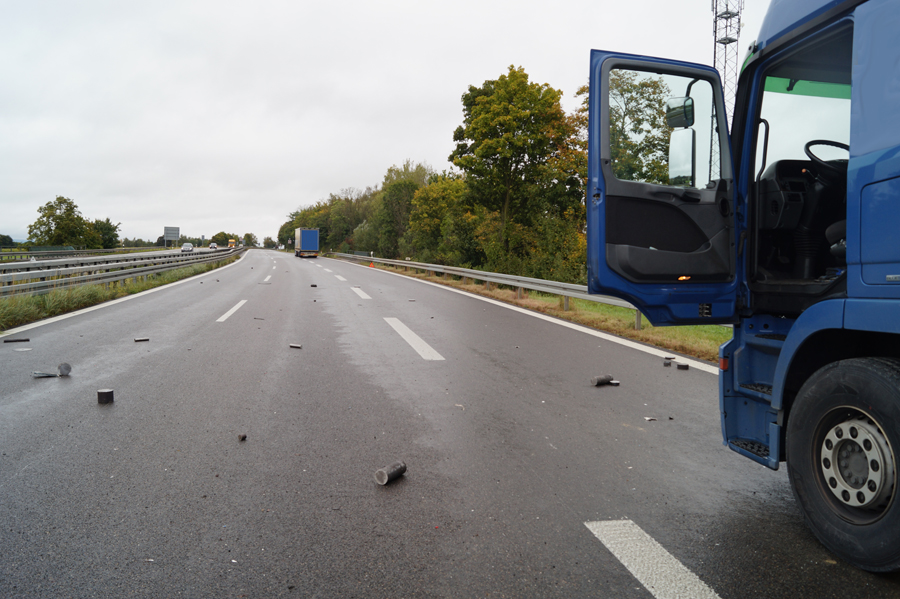 The area over which the scrap was scattered is impressive. Some of the scrap objects scattered under their own impetus and some were scattered by a passing articulated truck. This truck can be seen in the photo. It has been damaged and is standing on the right of the carriageway a considerable distance up the road. 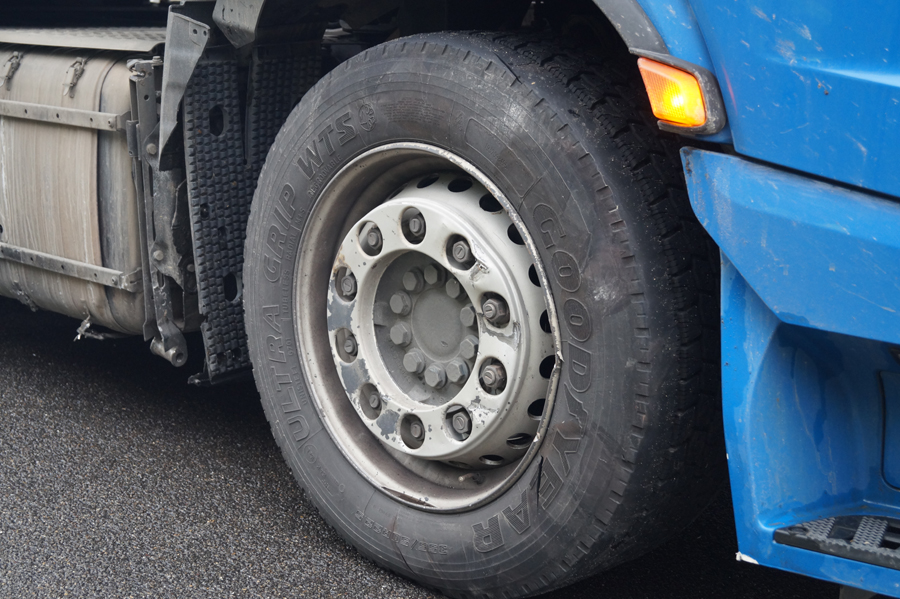 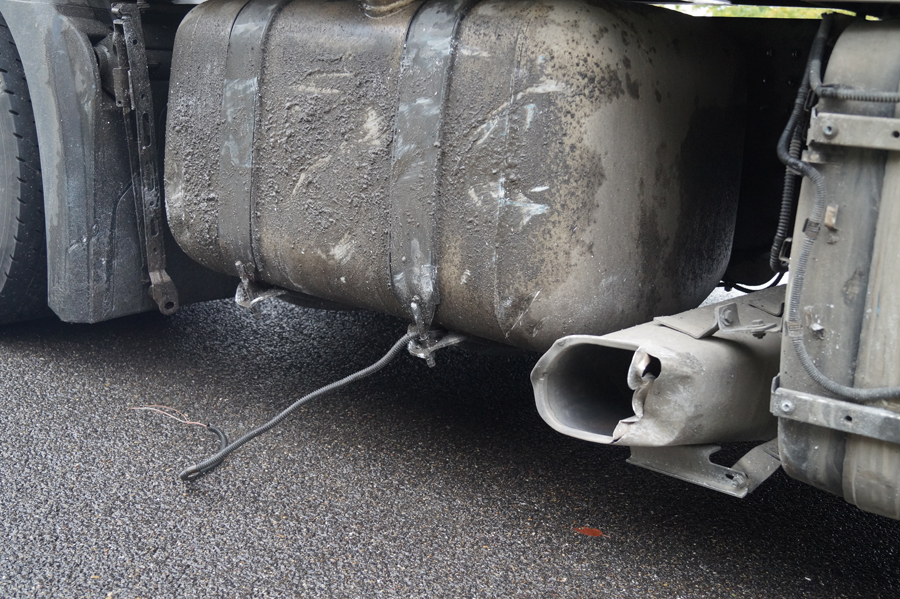 Fortunately, the tank is still intact, but the physical effects of the scrap metal are plain to see. We hesitate to imagine what may have happened if a car had been traveling next to the vehicle rather than a truck. But fortunately that wasn't the case.

It is no problem to secure the load on this vehicle. Anti-slip mats under the bins, which should be loaded as a tight fit to the front, and two belts per pair of bins. Of course, direct lashings and so on could also have been used. But no attempt whatsoever was made.

Side gates destroyed, second vehicle (articulated truck) seriously damaged, as is a passenger car on the other side of the road. We don’t know whether the highways agency thought that the damage to the road surface needed repairing. Either way, it will not be cheap.