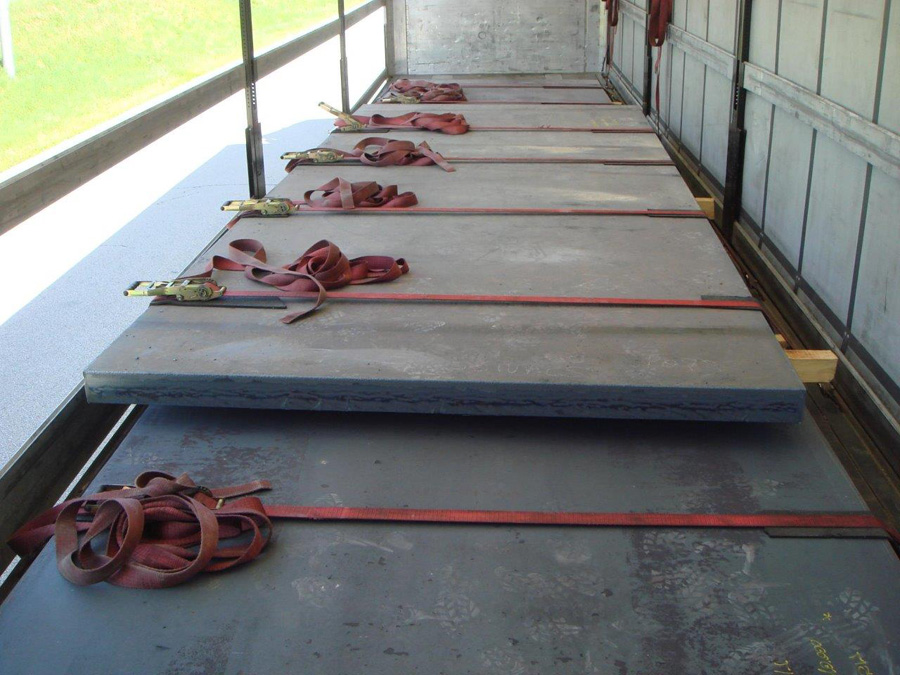 April is known for being somewhat unpredictable, so we would like to offer something rather more constant. And one constant that we unfortunately seem to come across – well, constantly – is the tie-down lashing. Light crates and boxes with a high coefficient of friction can be excellently secured with tie-down lashings, but what about these steel slabs? Particularly when they are so heavy? 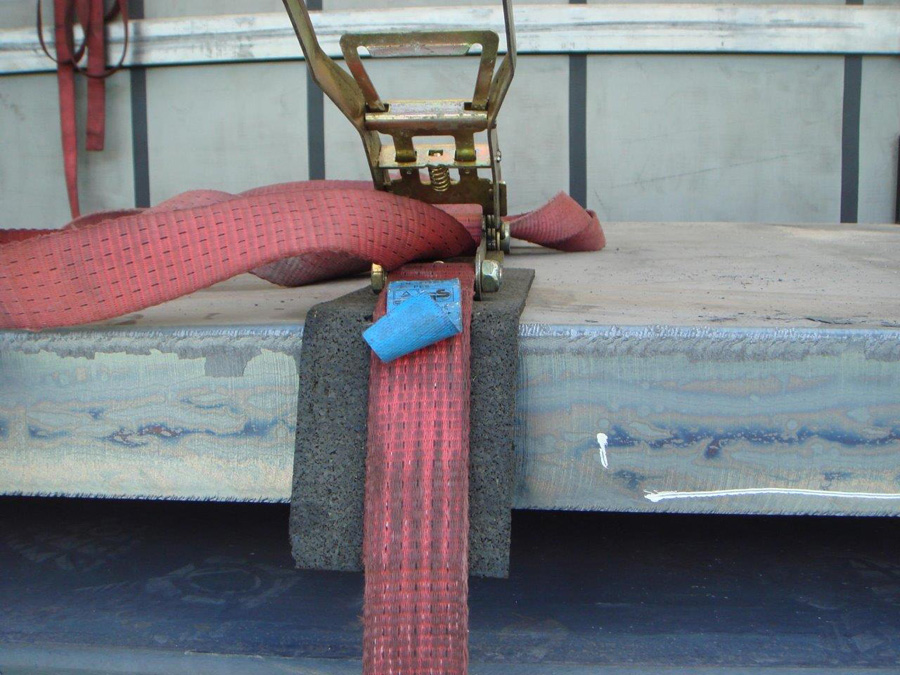 Before damaging one's precious belts, surely it's possible to use anti-slip mats as edge protectors if there is nothing else around. The securing effect of the tie-down lashing itself is not particularly wonderful, so the fact that the pre-tensioning force can now no longer be distributed properly really doesn't matter any more, does it? Anyone who is transporting a load like this and wants to secure it with belts needs edge protectors. And if they don't have any, the vehicle is not properly equipped for this load, which means that it is not suitable and cannot be used to transport the load. That's all there is to it.

What truly horrifies us here is the fact that there are clearly still steel mills or steel dealers around who are prepared to send out vehicles loaded like this or to allow them off the premises. You have to wonder whether the management have any idea that they will also end up in court in the event of an accident. If a steel plate falls from the vehicle and injures or even kills a person, the managing director of the company that allowed this vehicle onto the roads in this condition will be standing alongside the driver in court. And if the managing director is unable to incontrovertibly prove that they delegated their responsibility appropriately to their well qualified loading foreman at the loading bay, then we would not like to change places with them. Even though the driver always shares responsibility, a judge will undoubtedly ask themselves who had a greater say in this case. 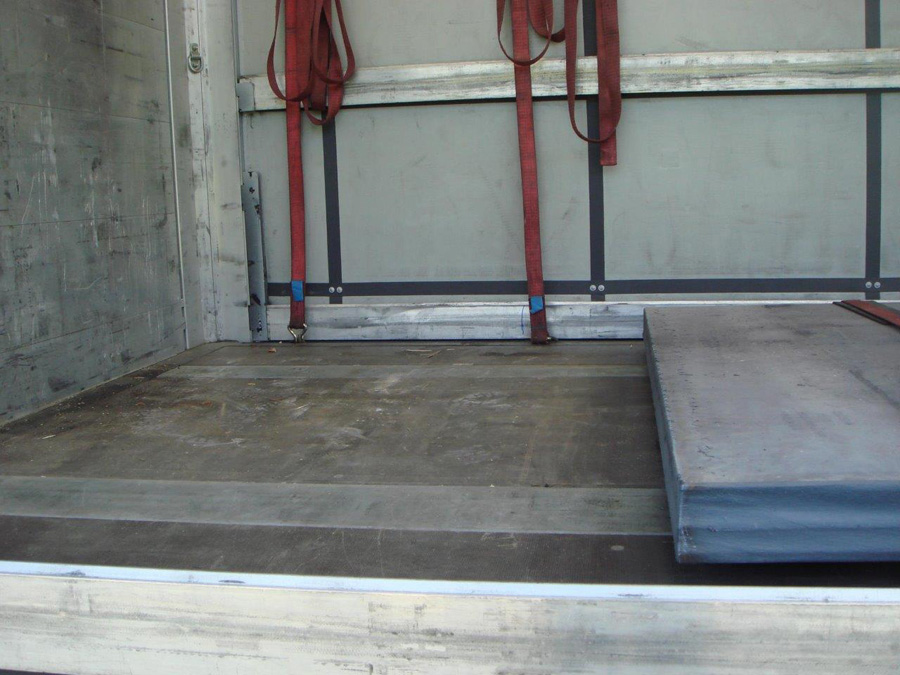 As we have come to expect from a load like this, there is no tight fit to the front. The load was placed considerably further back on the vehicle, undoubtedly for reasons of load distribution. Which is fine, but what about the gap between the load and the end wall?

Nothing there! Our intuition tells us that the load has been distributed properly, otherwise the vehicle will not handle properly, but a gap like this between the load and the end wall seems to be of no interest either to the loader or the driver. Which is unfortunate, because it guarantees that the load can build up considerable speed relative to the loading bed if the driver has to brake suddenly. And the energy the load generates would probably be enough to tear off the end wall and then either to make its way onto the road or penetrate the cab. It is strange that this is of no interest to the driver. After all, there are 23,550 kg of solid steel following him, and that load is only effectively secured against floating off into the air. 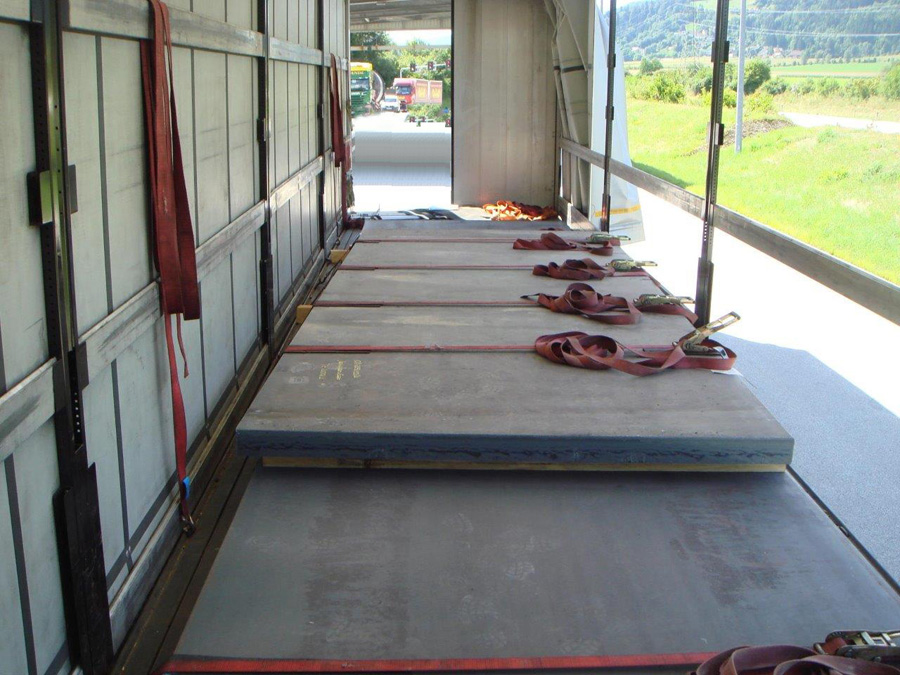 It is difficult to see, but reports confirm our suspicions that dunnage that had been placed on end had been used, at least with the top slab.

Note: "Small feet, narrow and tall, more often than not lead to a fall."

The use of these "small feet" made absolutely certain that the dunnage would tip over if the driver had to brake. This immediately gets rid of any pre-tensioning force and the load can set off without a care in the world, unburdened by any tiresome securing measures, to make its way towards the cab. And all this had the approval of the loader. Super!

So how can loads such as this be secured properly and easily?

Your load securing columnists wish you a safe and secure journey this Spring!