But nobody told the zucchini that. These were lying in their boxes and didn’t know the road. Perhaps it was rather like a driving lesson, where the driving instructor always says "keep driving straight on unless I say otherwise." The tractor to which the two trailers were attached set off for the farm. They arrived at a crossroads, where the driver indicated right and turned off.
Of course, the zucchini didn’t realize what was going on because of the dark green curtains around them. So they just carried straight on and all piled up against the left-hand tarpaulin. And, true to the motto "together we are strong," they were stronger than the tarpaulin.

The tarpaulin pulled free of the rail at the top and opened up the way to freedom. The zucchini grasped the opportunity and escaped together with their boxes. Most of them ended up on the left-turn lane (where they thought they would hinder the traffic least). 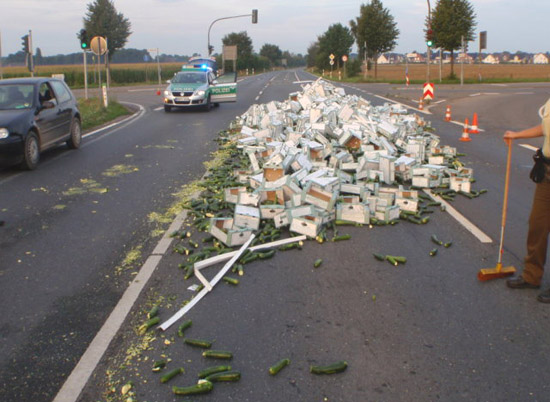 Good fortune was had by all! But that was no thanks to the tractor driver. Instead, it was pure chance.

So let us have a look at the vehicle and its trailers: 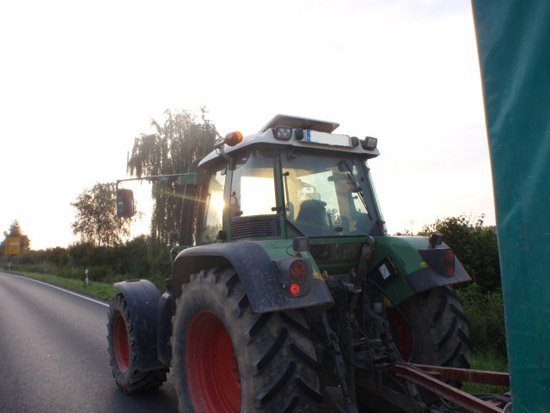 A tractor with two trailers. 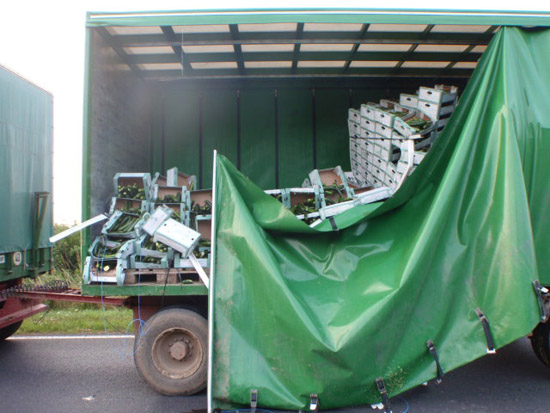 The tarpaulin curtains on the second trailer opened. 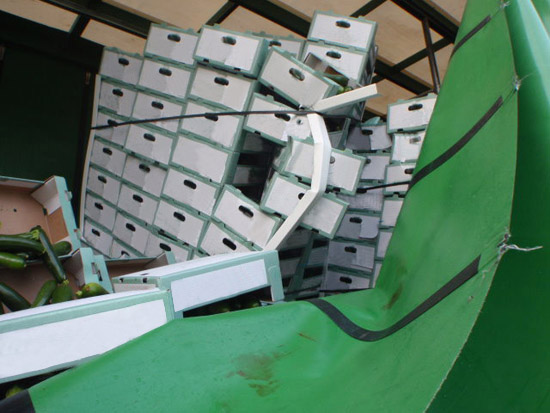 Figure 4 shows what happened. If you have a look at the tarpaulin, you can see that all the rollers that normally hold the tarpaulin in the guiderail of the roof have broken free. This is a clear indication that this tarpaulin is not suitable for securing a load to the side. It clearly serves only to protect the load from the elements. When planning and implementing the measures for load securing, it is necessary to proceed on the assumption that the tarpaulin is not even present. After all, it plays no role whatsoever in securing the load.

Now let us have a look at the load units!
The boxes were stacked chimney-style on pallets and stowed on top of each other. Cardboard bracing corners were fitted to the outer corners to improve the stability of the load unit. A rubber strap was placed around the top third of the load unit to increase its stability. And measures for securing the load? None whatsoever!


And in the final analysis, this was where the problem lay. The load tipped as the vehicle turned the corner and fell onto the tarpaulin. This was unable to absorb the forces exerted on it and broke free of its anchorage.
And so the zucchini were able to make their escape.

The superstructure of the vehicle (a curtainsider) is not sufficiently stable for transporting this load and the driver should never have embarked on the journey with an unsecured load.

So what can be done to transport this load safely?

As far as we see it, there are two options: 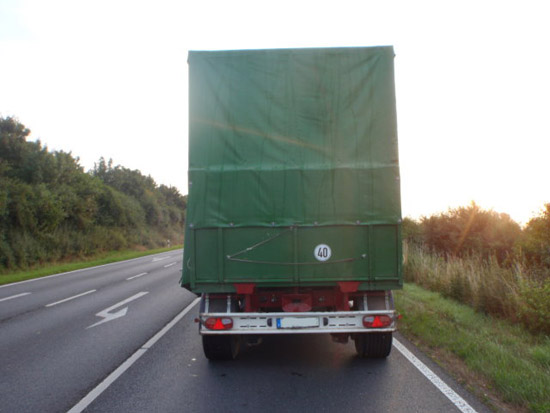 Is it in fact legal to tow two trailers?

According to Section 32 a of the StVZO (German road traffic licensing regulations) it is permitted to tow two trailers behind tractor vehicles (including this agricultural tractor) provided that the maximum permitted length that applies for a single trailer is not exceeded (18.00 m or 18.75 m under certain circumstances ——- see Section 32 of the StVZO).

Why is a sign showing 40 attached to the rear of the vehicle?

According to Section 58 (3) no. 2 StVZO, the following vehicles, among others, must be fitted with maximum speed signs:
Trailers with a maximum permitted speed of less than 100 kph, as dictated by their design.

The design of these trailers means that they have a maximum permitted speed of 40 kph. This sign is therefore required. It must be attached to the rear of the individual vehicles.