This tarpaulin truck was stopped for a routine police inspection. It was loaded with two cars that had been involved in accidents.

A great deal of time and effort had been invested in loading the truck and securing the load with lashing belts, but the well-versed inspector quickly began to furrow his brow at the sight. The car at the front was loaded with its rear resting on a trestle and the car at the back was partially placed under the front car to allow it also to fit on the loading area (Figure 1). In an emergency, it is possible to adopt this rather unusual method, but only if the car and the trestle are adequately secured, which is not the case here. 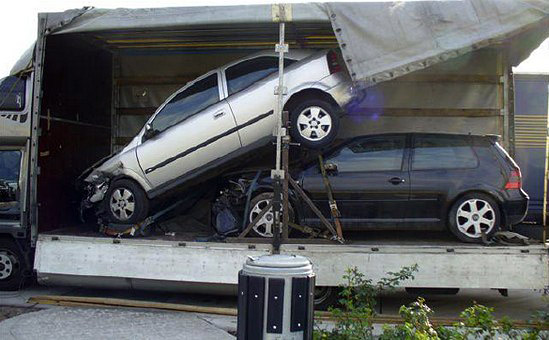 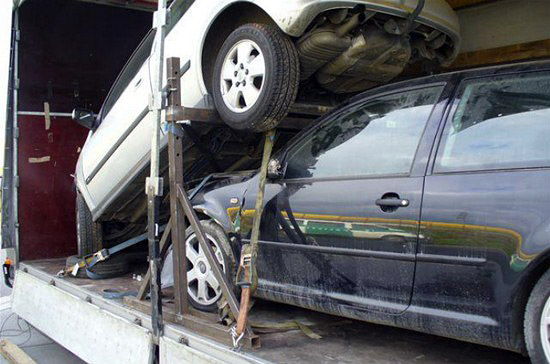 
Some of the hooks of the lashing belts attached to the trestle do not have a proper purchase (Figure 3). The right-hand part of the hook is hanging in thin air and the lashing belt has slipped to the right into the corner of the hook. The hook shown in the top of Figure 4 is also attached incorrectly (see red arrows). Double hooks such as these are intended for securing the belts directly to the vehicle frame. Hooks like those shown in Figures 6 and 7 may be suitable for use in cases like this one.


Threaded rods were used on both sides to secure and fix the cross-member (see Figure 4, green arrow). However, because the thread had been cold-formed by the cross-member being placed on it, It was not possible to tighten the nuts used. These were able to work loose simply as a result of vibrations, without any outside influence. 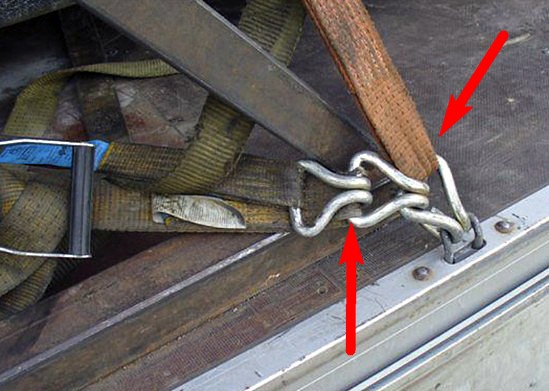 
The next three figures show the lashing points on the left and right rear of the raised car. 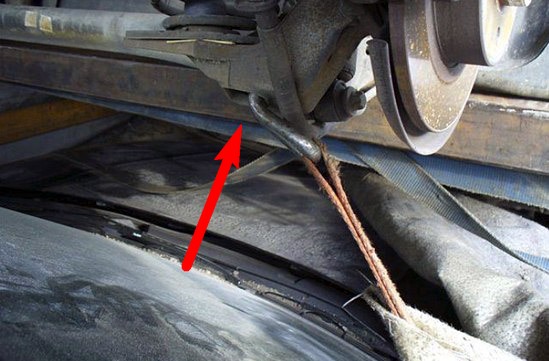 Figure 11 below shows the lashing point at the front left of the car resting on the trestle (red arrow). This lashing point comprised a deformed section of the bodywork. This, however, gave way when the belt was tightened. It was therefore impossible to build up any effective pre-tensioning force. 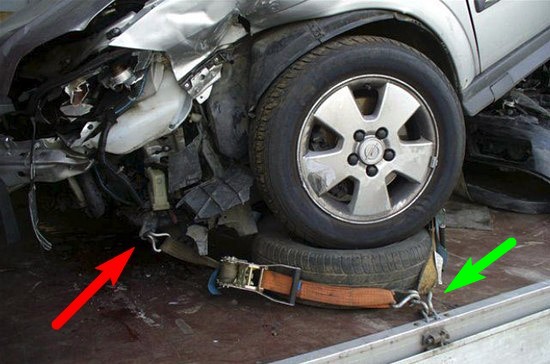 
A car tire was placed under the front wheels. Its purpose was presumably less to prevent slipping (this role is already fulfilled by the car’s tires) than to lift the front of the car and to protect the loading area from scratches. As well as the tire, you can also see that hooks have again been loaded multiple times in a way that is not permitted (green arrow).

Figure 12 shows the same impermissible multiple use of hooks and the lack of pre-tensioning force on the belts attached to the rear wheel of the rear car. 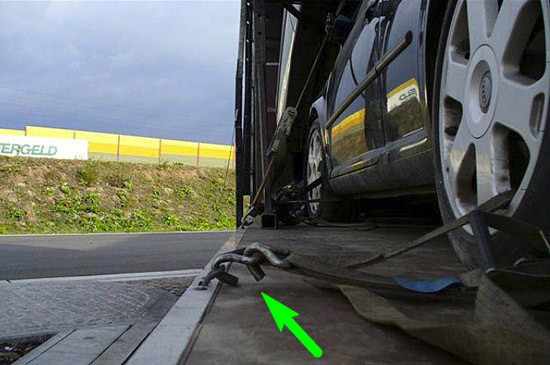 
How should these two cars have been secured correctly?

To start with, it is recommended that a vehicle suitable for transporting cars (i.e. with perforated steel plates) is used. If such a vehicle is not available and if two cars are to be transported on a loading area that is too short, as is the case here, it is imperative that they are adequately secured.

The loading area itself must be clean and free of oil and grease.

The trestle should have an extra cross-member near the feet in order to stabilize it. The cross-members must be securely attached to the trestle. Anti-slip material should be placed between the feet of the trestle and the loading area. The trestle must be secured with diagonal or direct lashings in such a way that it cannot tilt. These direct lashings must be attached and pre-tensioned in such a way that they ensure the necessary minimum level of securing.

Load securing can be achieved using wheel belts attached to all four wheels of each car. Each of the wheel belts are then secured directly by a lashing belt.

Care must be taken to ensure that the line of force of the belt is pointing to the center of the wheel, to ensure that if the wheel moves (turns), the pre-tensioning force cannot decrease (see Figures 13 and 14):


If a vehicle suitable for transporting cars (with perforated plates) is used, the wheels that are in direct contact with the loading area (perforated plate) are best secured with a three-point securing technique. This three-point securing technique involves passing a loop lashing round the tire with a belt. The wheels are additionally secured with stirrups (wheel chocks). The stirrups cause the three-point belt to act as a direct lashing. This prevents the tire from rolling over the stirrup (Figures 15 and 16). 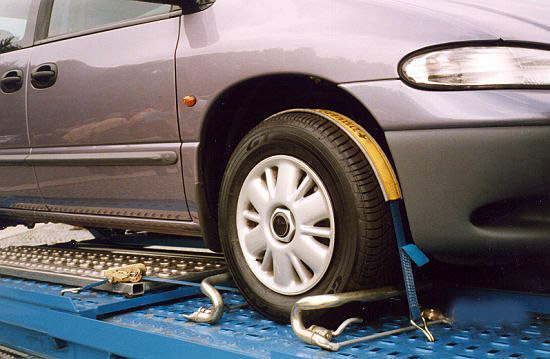 
A car must not be secured using the towing eyes. These are generally not suitable as lashing points and can rip off.