This load of metal gratings was stacked on the pallets in such a way that the gratings were not flush with the edge of the pallet. They were also inadequately strapped. To make matters worse, the load units were formed without the use of any intermediate layers which would have increased the safety of the load. 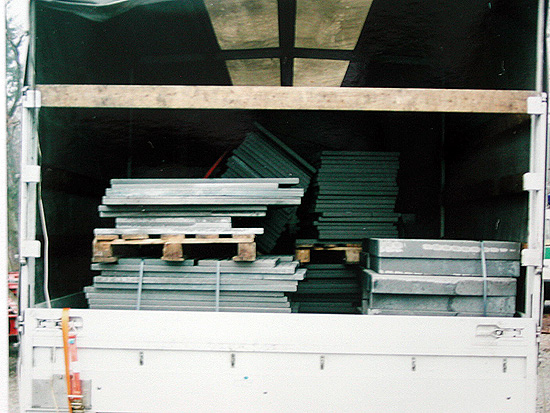 
If the load units themselves are secured so poorly and inadequately, one can hardly expect the loading staff or the driver to make a good job of securing the load on the vehicle. 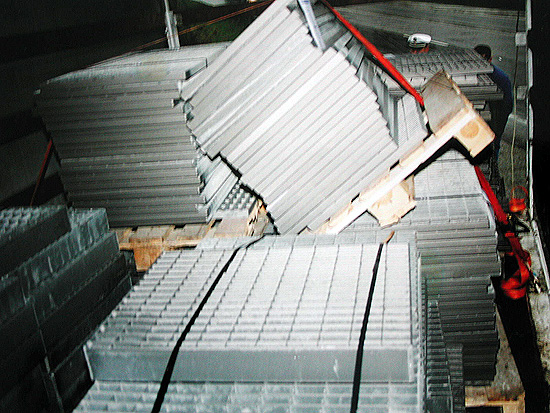 
As soon as tie-down lashings are used on loads with gaps between the load units, it becomes completely useless, and can indeed be counterproductive, as a diagonal, inward force is generated.

The vibrations and oscillations generated during transportation reduce the friction (from adhesive friction to sliding friction). This is generally sufficient to "press" the load together in the middle of the vehicle as a result of the diagonal, inward force generated by the tie-down lashing. This movement of the load reduces the effective peripheral dimensions of the load and the pre-tensioning of the lashing material rapidly drops to nothing.

Load units like this can then be loaded so as to form a tight fit and, depending on their weight, can also be secured with tie-down lashings. If these load units are then to be stacked, it makes sense to use intermediate layers and loop lashings, because loads which are stacked in layers and which have a very low coefficient of friction have a greater tendency to move horizontally than compact loads.