In the present Annex 13 horizontal weight components, inertia forces and wind/spray forces to a deck cargo, for reasons of simplification, are combined as acting in the centre of gravity of the cargo item. This is correct for the balance of sliding, however an approximation only for the balance of tipping. Particularly high deck cargo units with their major wind exposed area well above the centre of gravity should be given a separate compilation of moments from wind forces, spray forces and gravity/inertia forces in order to get a more realistic tipping moment. This option should be included in the Annex 13 by an amendment in its paragraph 7 as follows:

The tipping moment of high deck cargo units with a centre of wind attack deviating from the centre of gravity should be determined by compilation of the individual moments from gravity/inertia, wind and sea-sloshing.

Example: Figure 7.1 relates to the shipment of a huge portal harbour crane. The crane is shown in the ship-longitudinal view. The centres of attack by wind and spray deviate remarkably from the centre of gravity. A compilation of the individual tipping moment reads:

The conventionally computed tipping moment would be only:

The surplus against the conventional tipping moment is about 6% in this example. 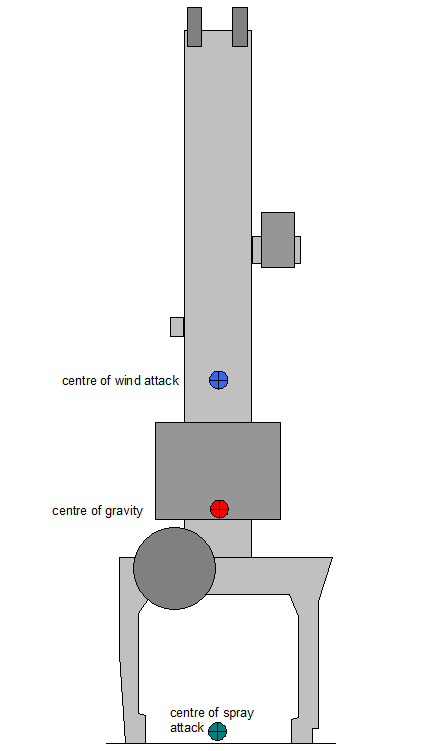