There is no doubt among experts that longitudinal and vertical accelerations may coincide with their maximum values on a vessel, because both are direct results of heaving and pitching motions in head-on seas. But their phase relation needs some consideration.

The present calculation method in the Annex 13 requires to assume the most critical phase relation with a full longitudinal force and a full negative (upward) vertical force. The upward vertical force reduces the weight of the cargo and causes thereby the unfavourable reduction of friction as well as reduction of tilting stability of the cargo. This increases the necessary longitudinal securing effort, particularly in stowage positions at the ends of the vessel, where vertical forces are substantial. This approach bears a contradiction, because the full longitudinal force incorporates the deck-parallel component of a full positive (downward) force, which is not there at this phase of motion by definition. The inherent error may be roughly corrected, if only 80% of the calculated vertical (upward) force were deducted from the cargo weight in a balance calculation. This would lead to an slightly modified balance of longitudinal sliding.

The assessment of the risk of longitudinal tipping to forward or aft is not explicitly lined out in the present Annex 13. The authors at that time were of the opinion that cargo tipping is a subordinate risk in general compared to the risk of sliding and where relevant, transverse tipping would occur in the first place. This is still true, but there are increasingly shipments of odd shaped cargo items, which may tip also longitudinally. Therefore this balance should be included into the Annex 13. 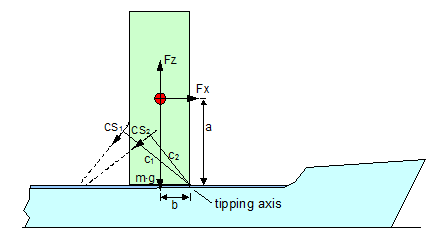