A reduction of load assumptions for navigating in restricted areas, accounting for the season of the year and the weather forecasts for the intended voyage, has been facilitated in principle in the Annex 13, but not explicitly specified. The need for a unified interpretation does not only result from a desirable cost reduction for cargo securing but also from occasional shipments of cargo units which are too sensitive against full scale accelerations and therefore require moderate transport conditions. Restricted sea areas or benign condition weather windows are generally distinguished by a less heavy seaway.

The actual seaway in a specified area is usually denoted by the oceanographic term „significant wave height“ with the acronym HS. Figures of HS are usually part of ocean and coastal weather forecasts for relevant sea areas and for the time span of one or more days. HS is a statistical measure of wave height in a given wave spectrum and corresponds closely to the arithmetical mean of the upper third of wave heights in that spectrum. It further coincides fairly well with the prominent wave height estimated by an experienced local observer. The mathematical definition of HS implies, that

The increase of off-shore marine operations and sensitive ocean shipments during the past decades has gone along with research and wave data collection. One outcome of this effort is a calculation tool that permits to determine a probability based significant wave height for operational purposes. The results are available for a large repertory of sea areas and for an optional number of operation days in that area. This tool is published by DNV-GL in the standard DNV-GL-ST-N001.

The figures of significant wave heights obtained by this calculation tool do not necessarily coincide with those from meteorological institutes because they are matched to vessel response and allowable stress design in the first place, but they might be as well used as parameters in a unified interpretation of the allowance made by the Annex 13.

An extract of the world map shows the reference numbers of sea areas. 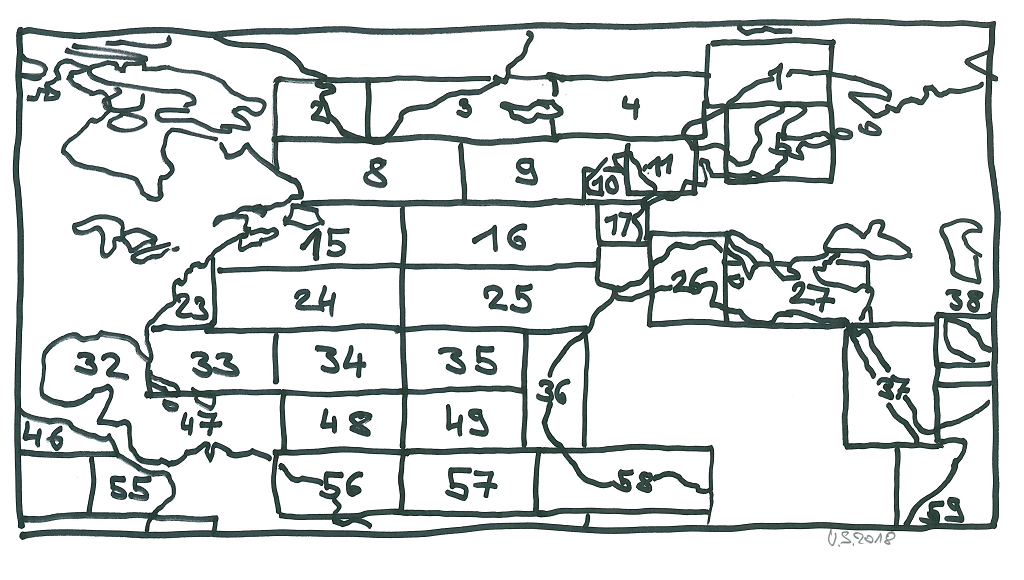 Figure 1.1: Extract of the world map of sea areas

Although the Annex 13 offers a possible reduction of acceleration assumptions explicitly for operation in a restricted area, this must not necessarily be understood only in a geographic sense but should include time limited operation in a moderate sea state anywhere in the world. Then the predicted significant wave height may be the only essential parameter.

There are presently two different reduction models available. Both models provide a reduction factor for the accelerations when entering with the parameter HM, which is the greatest of all predicted significant wave heights HS along the intended sea passage.

The first model has been introduced in 1993 in Sweden as a national tool and later in 2011 included into the revised IMO Code of Safe Practice for Ships Carrying Timber Deck Cargoes (TDC Code). This model is also the basis for the acceleration levels presented for different sea area in the IMO/ILO/UNECE Guidelines for Packing of Cargo Transport Units from 1997 and also in the revised IMO/ILO/UNECE Code of Practice for Packing of Cargo Transport Units (CTU Code) from 2014.

The second model has been developed by the International Association of Classification Societies (IACS) in 2013 in the aftermath of the Lashing@Sea project. It has been based on measurements of accelerations on different vessels in identified sea states and on theoretical vessel response models.

The Swedish reduction model is represented by the formula for the reduction factor fR.

The constant 19.6 in this formula denotes the height of the twenty year significant wave in the Northern Atlantic Ocean. Figure 1.3 shows the graph of the formula together with numerous points of sample reduction factors showing the relations of measured accelerations to the calculated Annex 13 acceleration level.

The vast majority of measurements has been collected in sea states with HS-values not greater than 8 metres. There were, however, a few observations in greater wave heights. This may be explained by the limited number of ships operating in greater wave heights and by today’s weather routeing which enables to avoid such areas.

The Swedish model has been successfully used, not only by Swedish flagged vessels, in the Baltic and North Sea shipping, particularly in roro-ships and ferries with semi-standardised stowage and securing systems, and also in the Baltic timber trade. In lack of other models for reducing the accelerations to a reasonable level in modern shipping the model has been accepted by most Maritime Administrations and Classification Societies.

The IACS reduction model is represented by the formula: 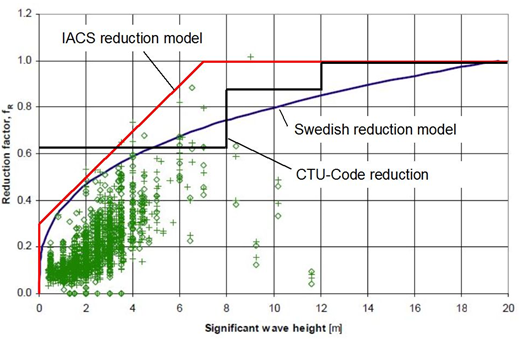 1.5  Unified interpretation of the „reduction clause“ in the Annex 13

The utilisation of a reduction factor would be simply its multiplication with the specific longitudinal, transverse and vertical forces obtained from the Annex 13 tables. The subsequent balance calculations for the prevention of sliding or tipping of the cargo unit in question would be satisfied with correspondingly less securing effort.

Another practical application of the reduction factor would be the preparation of tables or diagrams for a distinguished vessel in its Cargo Securing Manual. Such tables or diagrams would show the necessary securing effort in different stowage positions in the vessel, depending on the forecasted sea state in terms of significant wave height. This practice has been employed successfully for many years in the Baltic and North Sea trades.

At the time being it is still open, which of the two models or what compromise solution may be given the IMO recommendation status in the form of a unified interpretation of the reduction clause in the Annex 13. Whatever model is used, the essential parameter HM should be specified in terms of reliability, which may be made dependent on the prediction period and/or possible ports of refuge underway.

One possible solution may be to distinguish different modes of cargo transport according to the following:

This solution should be complemented by a definition of the positive properties of standardised and semi-standardised stowage and securing systems in order to guarantee the appropriate world-wide application. Good Cargo Securing Manuals will contain this already.