Flat roof or a twist of fate 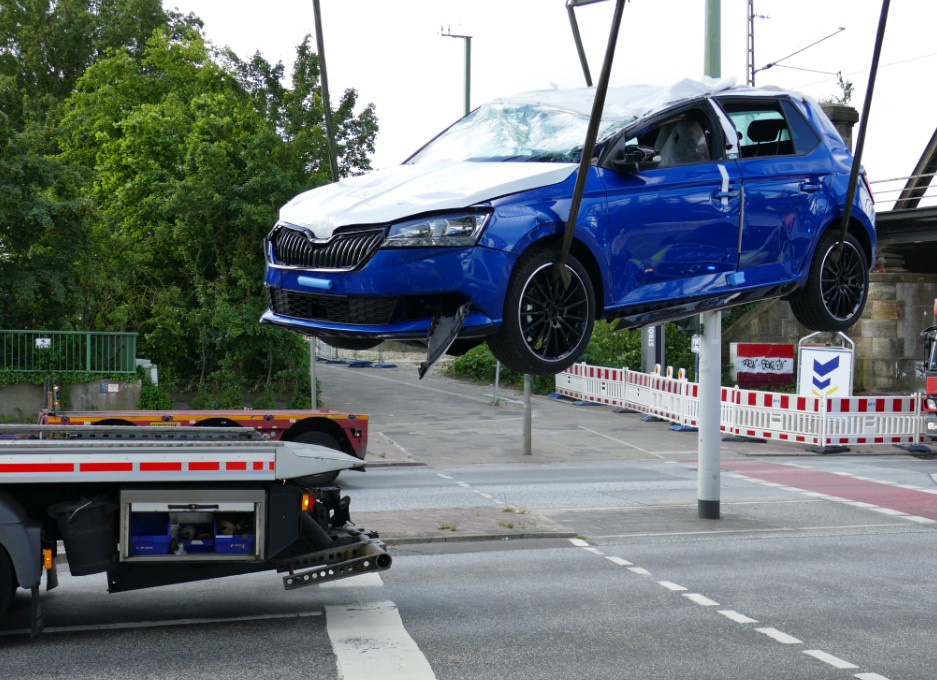 Looking at this first photo, we ask ourselves how this otherwise largely unscathed vehicle came to have a flattened roof. Did something fall on it? Or did a car transporter pass under a low bridge? The next photo explains all: 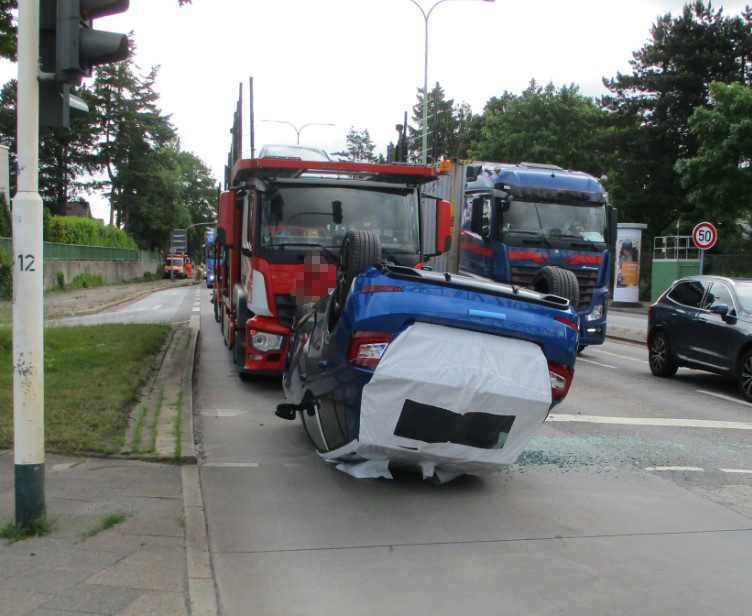 After somersaulting through 180°, the car, which had not quite been secured properly, landed on its roof. And once again, it was a stroke of good fortune that there was no motorcycle or small convertible standing in front of the truck and that there was no pedestrian crossing the road at just that moment.

The cruel twist of fate was that the car transporter had already completed 99 % of its journey and only had another 6.5 km to its destination. What can we learn from this? However short the trip, it is always long enough for a potentially fatal accident. Here are a few quotes from the reports of the police at the scene:

After driving for some 650 km, the truck driver had to brake sharply at traffic signals in Bremerhaven. By his own admission, this was because he saw the red light late, being dazzled by the sunlight. Evaluation of the tachograph’s memory showed that the driver decelerated at a rate of about 6.7 m/s. This considerable deceleration, combined with a loosened belt, meant that the unsecured load continued on its way over the wheel chocks and the articulated truck itself, and fell onto the pedestrian crossing in front of it, which was not being used at the time of the accident. 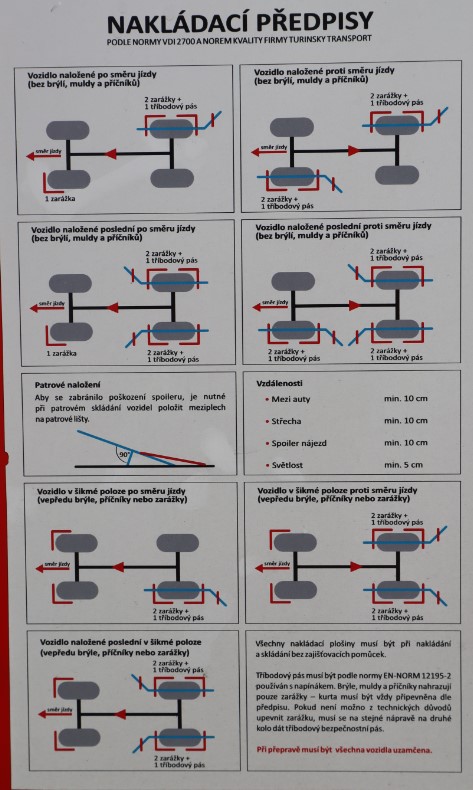 The correct way of securing the vehicle is described in the relevant VDI guidelines and, as can be seen in the photo, this information is also displayed, handed out and even attached to the car transporters by the shippers. This alone is not enough: The load also has to actually be secured as described in the information sheets. Without inspections on the part of the factories (shippers), sloppiness creeps in as a result of the unceasing time pressure. And time and again this can lead to accidents. According to the police, not a single vehicle on the transporter was properly secured. Unsafe actions will inevitably lead to incidents at some point. 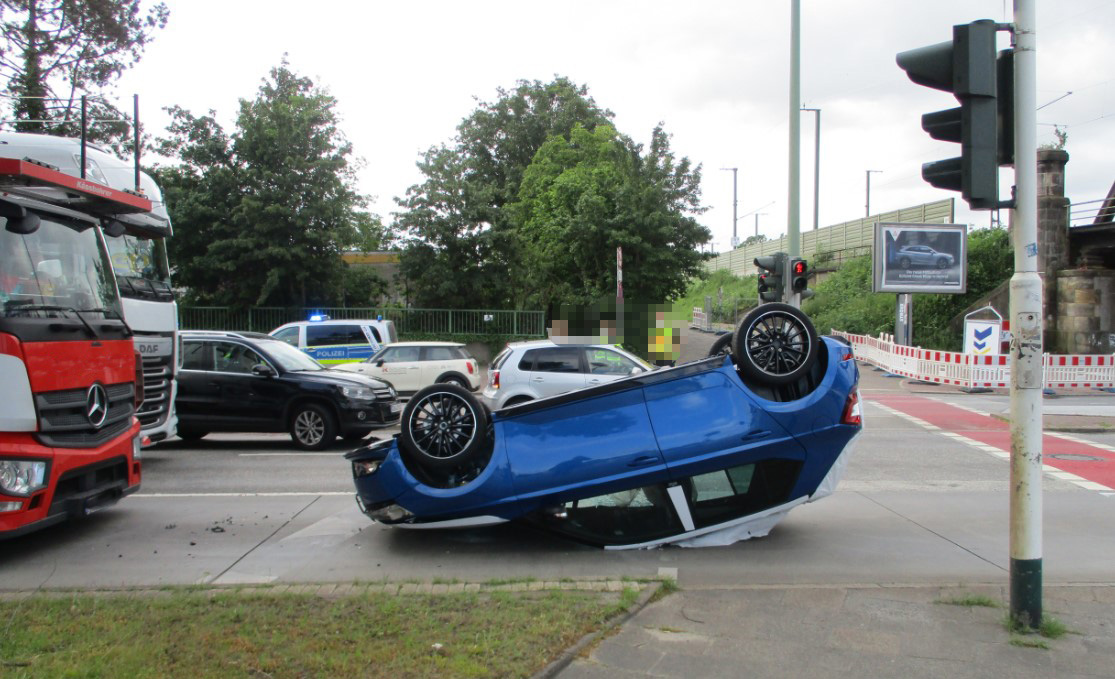 Even though this accident may initially bring a smile to our faces, it shows the hazard presented by a poorly secured load and demonstrates how important it is that the shippers, in this case the factory, ensure strict load inspections. Regulations alone are not enough, it is necessary to check (at least in respect of key aspects) whether the drivers actually secure the load in exactly the way described. Otherwise…. 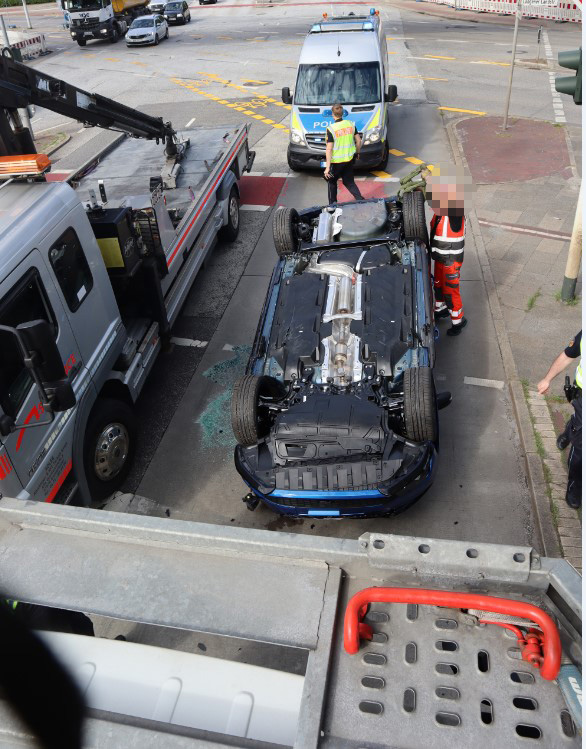 Your load securing columnists wish you a relaxing, safe and secure summer!