The elegant poise of concrete

A lowloader is transporting a concrete support or pillar to be used for constructing a hall. The real elegance and poise is that, although the support has slipped, it did not hit the road. The wood you can see there has only been placed under the base as a precaution. The driver put it there to prevent any damage to the road surface and to prevent the concrete component from being ruined if it slipped any further. 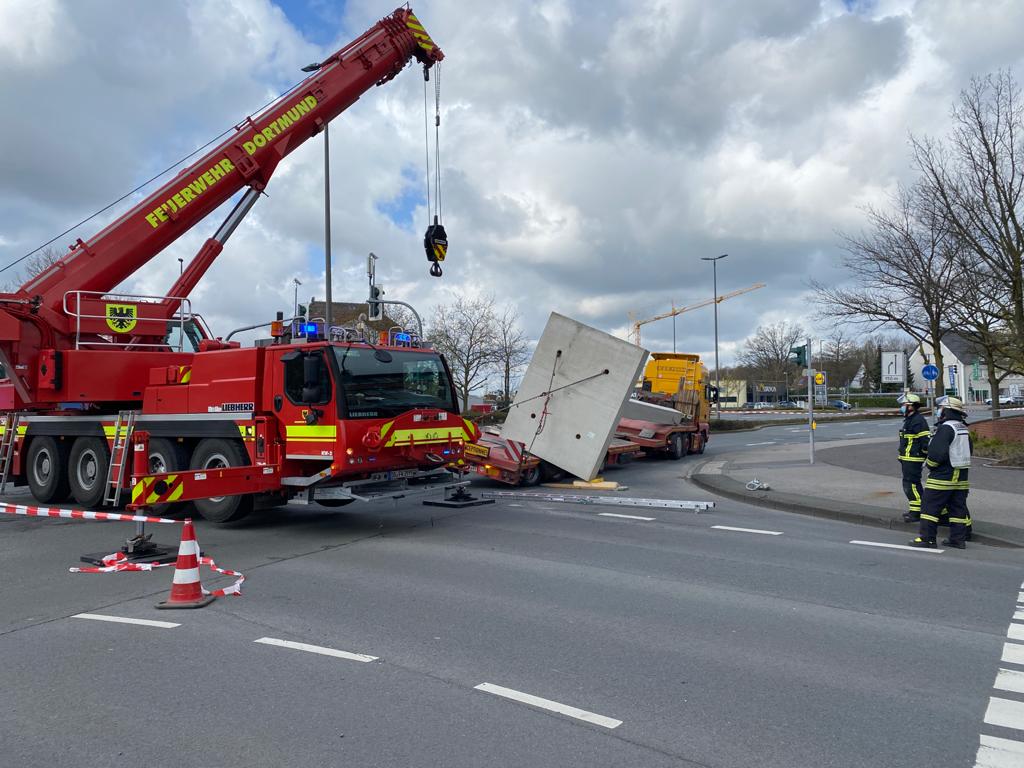 We could guess that the whole of the support has slipped to the right of the vehicle, but we have better photos to show what happened: 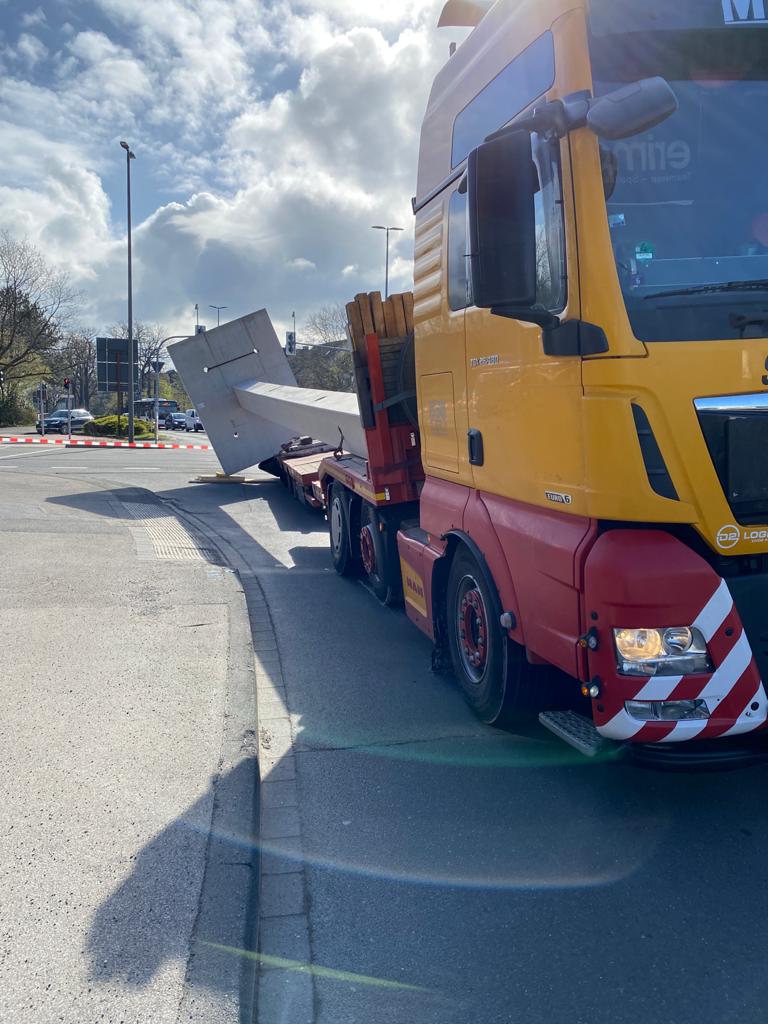 At the front, the actual column has slipped so far that the tie-down lashing has become a kind of “direct lashing”. Which begs the question why a direct lashing wasn’t used in the first place. 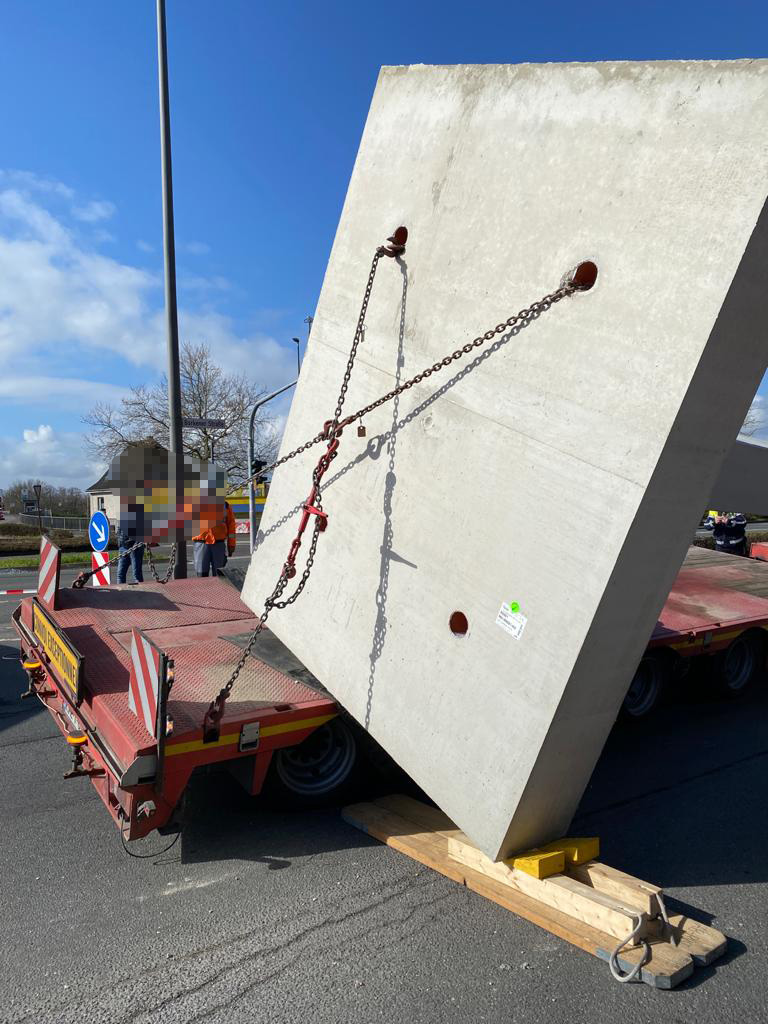 The most impressive attempt to secure the load can be seen at the back. Several chains were hooked together before being artfully threaded through the holes at the top. And the result was that the chain simply slipped through the holes when subjected to a lateral load. In other words, it did not behave in the way that many self-proclaimed experts had expected, namely get jammed and act as a direct lashing. Not at all! Short-link chains in particular (other kinds are not even permitted to be used on the road) slip over edges perfectly well and, as can easily be seen here, through the holes in the concrete. The wood is only there as a precaution. The driver had the presence of mind to prevent even greater damage, as the support is still poised above the road. So why did the support only slip this far and why is the right-hand chain hanging loose? Because one of the two hooks got caught or jammed in the hole. That’s the only reason for this delicate balancing act. So what did the driver intend to achieve with this “artistic” method of securing? By threading the chain through the base, he wanted to kill three birds with one stone. Firstly, he wanted to secure the load laterally with the supposed “direct lashing”, and secondly he wanted to secure the load longitudinally. And thirdly, he chose the upper holes because he “felt” that he wanted to do something to prevent the load from tipping. 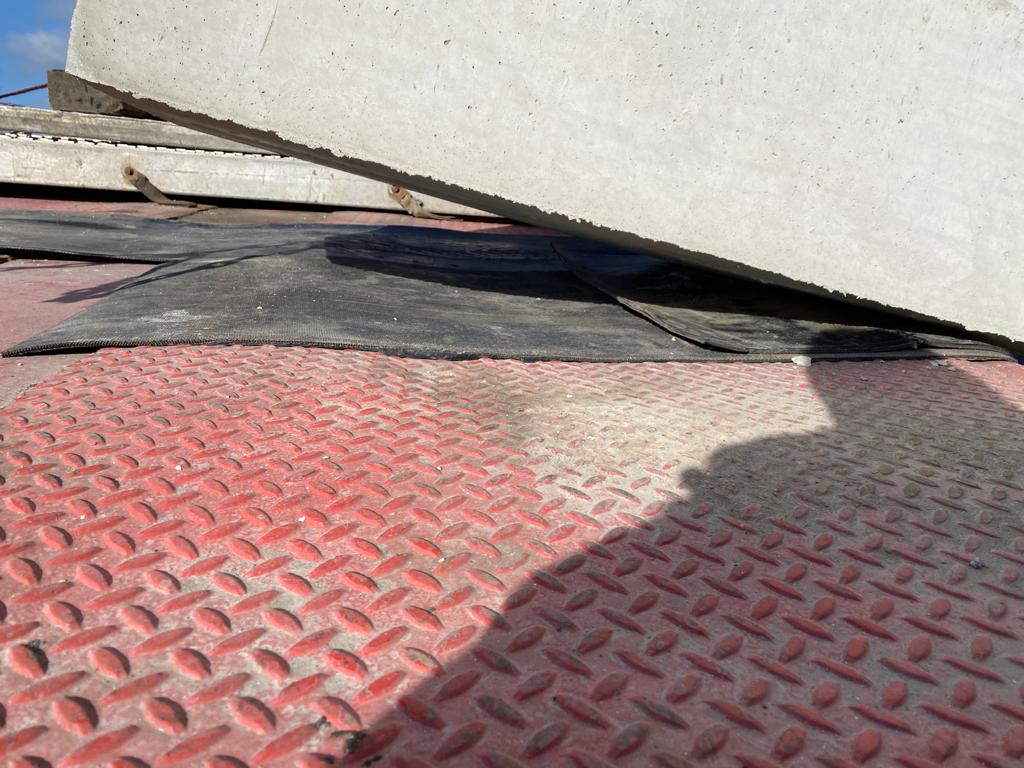 Used conveyor belt “rubber” had been placed under the base plate of the support. If we look closely, we can already see the fabric structure of the belt, in other words, all the rubber has gone. In addition, this “rubber” is far from clean, but at least three layers had been put down.

It is laudable to try to reuse things that can no longer serve their original purpose. But not for load securing, for goodness’ sake! The word “securing” implies safety, and this supposed “recycling mentality” (it’s not really that important …) is completely misplaced here and is simply unsafe!

Clean heavy-duty mats are what are needed here! And not simply some junk that belongs on the rubbish tip or should be immediately sent for recycling (if possible).

Your load securing columnists wish you a safe and secure early summer.