This sinking feeling is something we often encounter when shipping containers. If containers are overloaded without any thought for the consequences or if they are subjected to excessive point loading, damage is the inevitable result.

Every container has a line load capacity, i.e. the load that it can withstand along a given load length. The rule of thumb for this line load capacity is the payload divided by the total length available for the load in the container. For example, if a 20' container has a payload of 28 tonnes, it is guaranteed to be able to handle 28 t / 6 m = 4.66 tonnes per running meter of load. 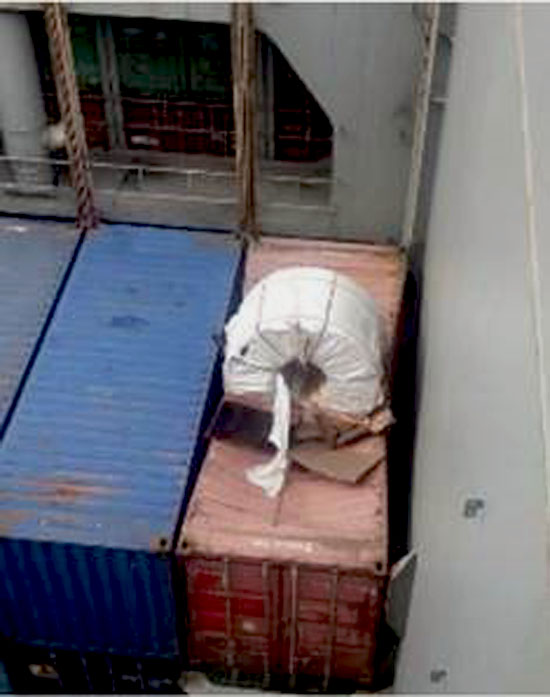 Containers have a sturdy frame. The corner posts are the load-bearing members, and these absorb the stacking loads. The side and end rails are the second strongest components of a container. The floor assembly, the walls and the roof are fitted between these members.

At this point, we should like to present this short video that shows the construction of a shipping container in greater detail.

All forces that act on the floor of a container have to be dissipated via the corner posts.

If a point load is acting in the middle of the container, the distance to the corner posts is at its maximum and consequently the effective length exerting leverage is also at its maximum. The closer a load is to the corner posts, the higher the load that can be applied to the container floor. The distance to the side rails is also crucial. If a single coil is loaded into a container, this is the greatest challenge a packer can face since, as a rule, the coil will be very heavy and its shape and weight mean that it has to be placed in the middle of the container. This calls for the most extensive load distribution measures to be taken.

The GDV has added a comprehensive section on this topic to its Container Handbook: “Loading and Transport of Steel Coils in ISO-Containers” by Professor Kaps. Proper load distribution is vital when loading coils in containers. Strong balks or even I-beams have to be used for this purpose.

In our photo, the coil is lying on the roof of the container below. We can see part of the floor, but there are no balks that would have been able to distribute the load over the floor of the container. This is a gross breach of the CTU code and all the rules of load securing and load distribution.

The photo was provided to us by the Cargo Incident Notification System CINS. This is an association of major container shipping lines, who are committed to improving transport quality in maritime operations. The CINS website also includes extremely useful notes on load distribution and load securing when transporting coils in containers.

Load-securing shortcomings such as this can have fatal consequences for the loading staff. If the containers are being transported by rail, it is possible for an entire train to be derailed (as happened in Germany in 2007), and such containers can cause a significant loss of cargo at sea – sufficient to threaten the safety of the entire vessel.