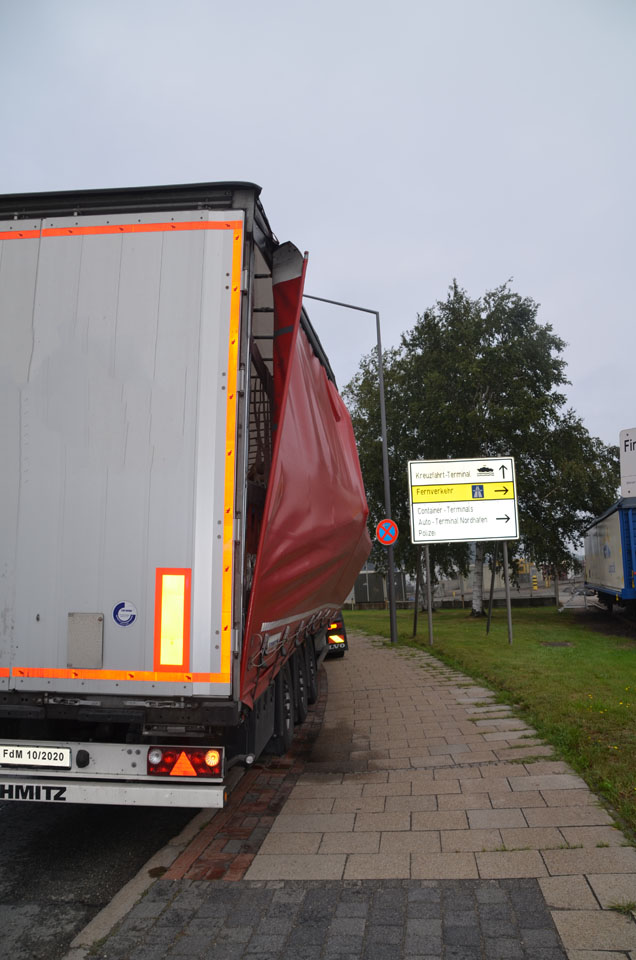 Somewhere in the north of Germany. An articulated truck was rounding a bend. The road was rutted and not in an ideal condition, so the load decided to have a closer look at what was making the journey so uncomfortable. The collapsible stanchion was thoroughly bent, the tarpaulin had sagged and the roof bars seemed to have become pregnant. But despite the amount of aluminium available, no baby trailer was born. 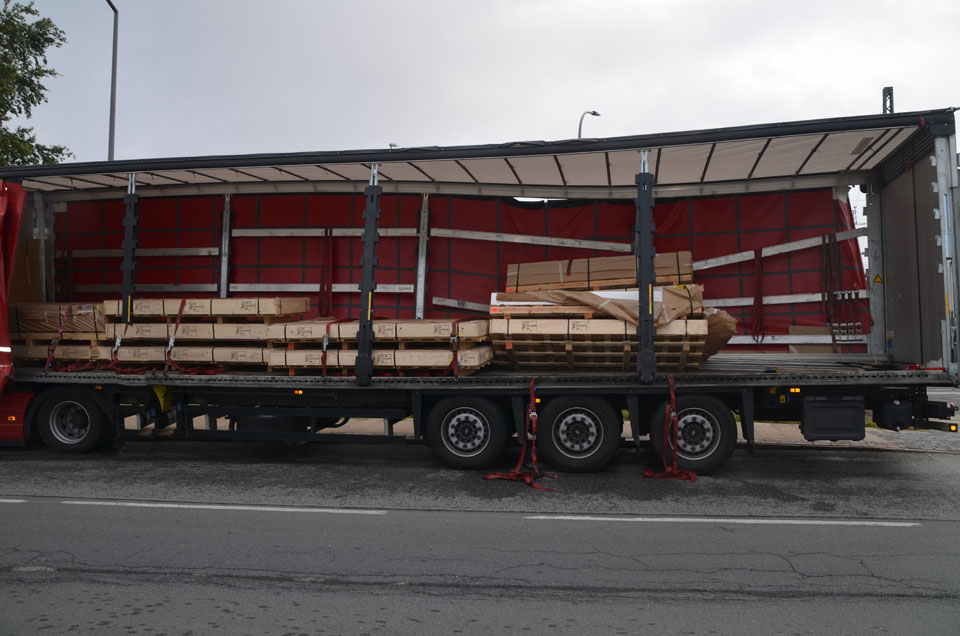 It was no surprise whatsoever when a look at the other side revealed “our favorite”, the tie-down lashing. Just to make sure there is no misunderstanding: Tie-down lashings are a lousy way of securing a load, but in many cases, we simply do not know of any better load-securing arrangement. But it is necessary to understand this securing method and exactly how it works. Tie-down lashings are not intended to restrain the load from flying up from the loading bed; rather, they are used to artificially increase the weight of the load. This results in more friction on the loading surface and, very importantly, between the individual elements of the load. 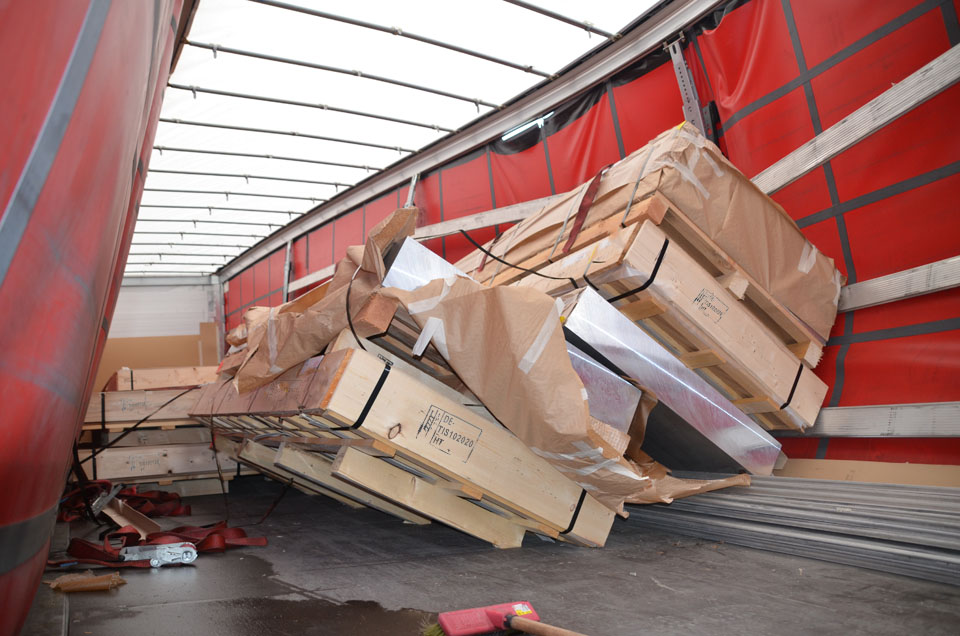 The vehicle itself is fitted with tires that provide grip and friction, and decades of research has gone into them. But the best a load can hope for is that it is shod with wood, as in this case. But part of the load is simply wrapped in paper, like fish from the market. And nobody should be surprised to find that this was the crucial failing that led to this accident. After all, we are talking about blocks of aluminium weighing several tonnes that were stacked on top of each other. The first was in a wooden crate, the next wrapped in paper, followed by another one in a wooden crate, and so on. Quite apart from the fact that the load securing efforts as a whole were disastrous, even if all the aluminium blocks had been packed in wooden crates, the sheer level of indifference and thoughtlessness demonstrated here infuriates us. After the accident, the driver would have been standing there ashamed. But we wonder who would have sent him onto the road like that, when he had clearly heard little, if anything, about load securing. To call it irresponsible beyond redemption would be generous.

One thing we have not looked at closely is the fact that the dunnage under the bottom package is quite short. Given that the load is five packages high, this could easily be close to the threshold where the load would be at risk of tipping. But we don’t know the exact dimensions, so we will not address this issue today. 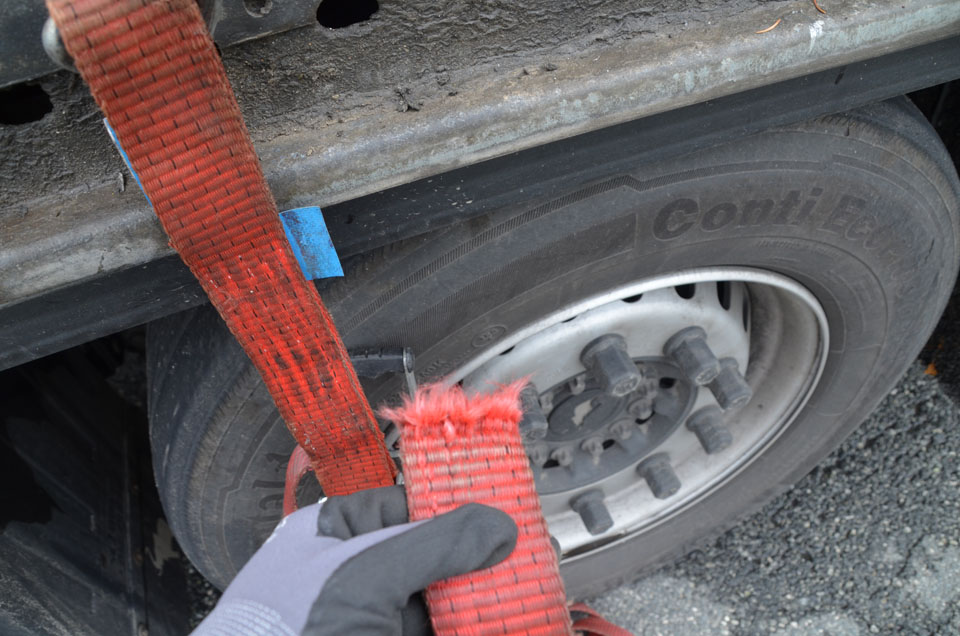 It was clear that the aluminium blocks wrapped in paper would cut through the belts like a knife, and here we see the proof. And this even though Figure 3 shows an edge protector on the loading bed. But when the load moves to such a great extent, the edge protector will of course not stay where it has been put to do its job. 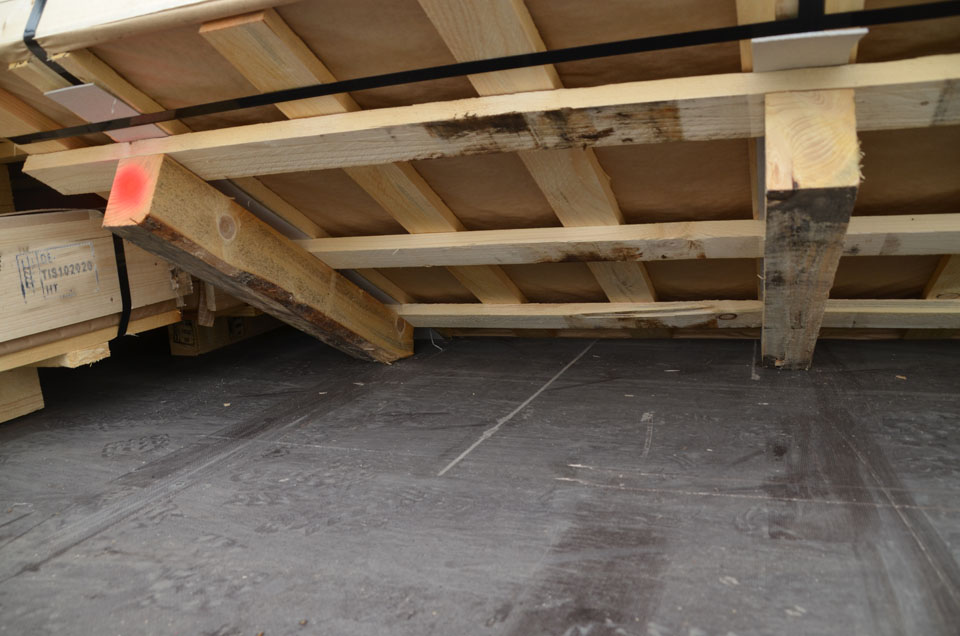 And there is another treat for the transport insurers among our readers. As you can easily see, every piece of wood that was used here bears an IPPC stamp with the abbreviation HT (heat treated). If this cargo is shipped to the USA, it will be rejected without hesitation during inspections because the wood has bark over a large area. It has been known for years that the slightest sign of bark still attached, an ant on or in the cargo, or a wormhole in the wood, leads to the rejection of entire cargoes. We are not here to discuss whether or not such actions are politically motivated. But it is a fact that this has already cost transport insurers millions and the sector has known about it for years. It is more than a mystery to us how any packer can come up with the idea of simply carrying on packing the cargo using wood to which bark is still attached.

But let’s get back to the matter in hand!

Since the friction chain, or more accurately the lack of a friction chain, was the cause of this accident, we want to take a closer look at this “chain” today. If we cast our eyes towards the road, we start with the friction between the road and the tires. This friction prevents the vehicle from slipping sideways and allows it to brake like a car (forward deceleration forces of 0.8 g).

If we now use anti-slip materials on the loading bed, we increase the inherently poor friction of steel on textured, coated board, wood on textured, coated board, or paper on textured, coated board to virtually the same level. And that's all there is to securing on the basis of friction. Every item added to the stack must have the same friction, otherwise securing on the basis of a friction chain will not work. We can see a “fine” example in Figure 3. In the second layer, there is an aluminium block that is just wrapped in paper on a pallet. The coefficient of friction μ between paper and polished aluminium will lie somewhere between 0.1 and 0.2. And this is the root cause of the accident. The friction chain was interrupted and it was precisely these aluminium blocks that took the opportunity to make a break for it.

If the four load units or five aluminium blocks (maybe even six) had all been enclosed in wood, we could have assumed a friction chain with a coefficient of friction μ of 0.3 to 0.4. The load units weighed 2900 kg / 2900 kg / 1500 kg / 1500 kg, making a total weight of 8800 kg. Rounded up, this results in a weight force of 8800 daN. Lateral securing forces of 1760 daN or 880 daN are required (we shall disregard the calculation for the direction of travel, as the load is at least partially loaded as a tight fit).

This securing force cannot be achieved with two tie-down lashings, even with an intact friction chain. The two tie-down lashings together may provide a vertical component of 1000 daN, but only 300 daN have a securing effect via friction. If we assume a coefficient of friction μ of 0.4 (which is a very bold assumption where the wood still has bark attached), there is still a shortfall of 480 daN of securing force.

Example 1 at a coefficient of friction μ of 0.3

Example 2 at a coefficient of friction μ of 0.4

If, on the other hand, we had a coefficient of friction μ of 0.6 throughout the chain, there would be no problem. When we say “throughout the chain”, we mean that each of the load units is resting on anti-slip material in such a way that they are completely isolated from each other in terms of friction. Only then can the good level of friction act upwards through the entire chain and actually secure the load

Example 3 at a coefficient of friction μ of 0.6 (anti-slip material)

But faced with such dreadful packaging, that simply doesn’t help, because paper cannot absorb this lateral force and then pass it on to the load below.

And another word about the friction chain. If loads are stacked, the friction between the individual elements of the load must be given the same attention as the friction between the bottom element of the load and the loading bed. The friction can only be passed on from load to load or load unit to load unit if the packaging makes this possible. This is because it is the packaging that is on the outside and has to pass on the friction to the cargo or the load stacked above it. If it cannot do so, then the load securing measures have to compensate for this shortcoming. But does a driver have to be able to recognize this problem? NO, he does not, because he is not a packaging expert and can only identify obvious packaging faults.

If he does identify the faults, he would in this case have to put in the considerable effort of using loop lashings to restrain the load – using plenty of edge protectors, of course. In our opinion, the huge discrepancies between the packaging is another fundamental shortcoming for which the shipper is responsible. Where there are such discrepancies in the packaging, it is necessary to be particularly careful about securing the load. Explicit instructions are absolutely necessary here.

Paper packaging sometimes contains bulking agents such as flour, cement or similar. When paper sacks of this kind are to be stacked together to form a load unit, people often even turn to adhesive to allow the load unit to form a unit at all as a result of “internal” friction. Shrink film is also used. In our example, we can see steel straps that have failed. We cannot say for certain whether two aluminium blocks had been bundled together; but what we can say is that forming a load unit in this way was not sufficiently stable for the type of loading and securing chosen.