Agricultural transport operations, especially during harvest time, count among the most scurrilous things you will see on our roads. There are times when you might think that the laws of physics are out to lunch. After all, if there is some way of doing something, it gets done as time is pressing, and the weather might change. And if a bale of straw, hay or silage drops off a trailer, it won’t do a great deal of damage, will it? So everything possible is loaded and piled up, and if something goes wrong, virtually everyone has a lot of sympathy for our farmers.

But there is a limit. 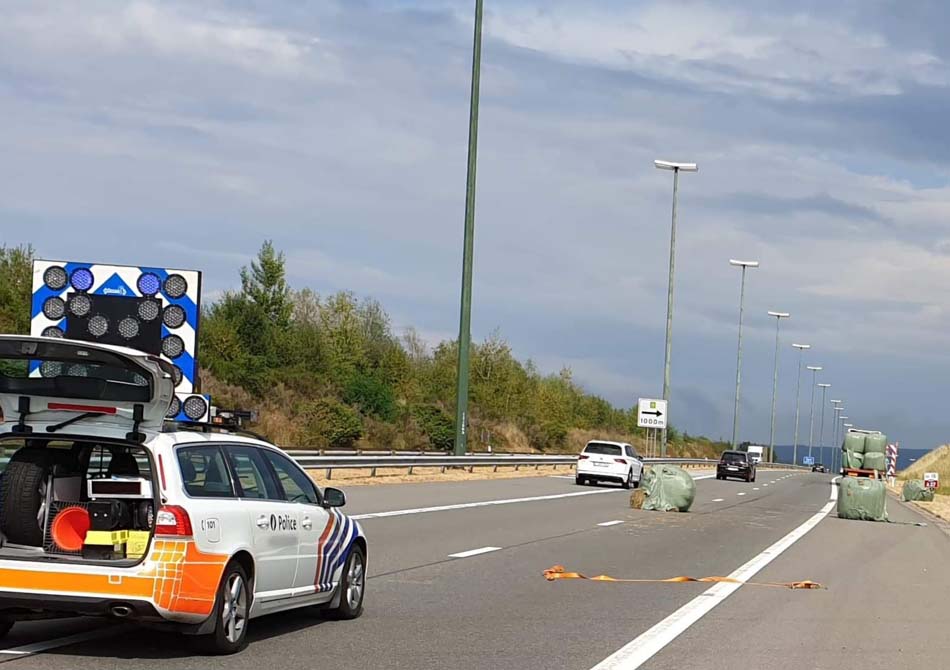 Figure 1 shows the extent of the problem. We can see a motorway or a dual carriageway with bales of silage lying on it. Weighing several hundreds of kilos and having just fallen from a truck, they represent a massive danger. The belt is right next to the police car and just a few meters away are the silage bales that have rolled off the loading bed. 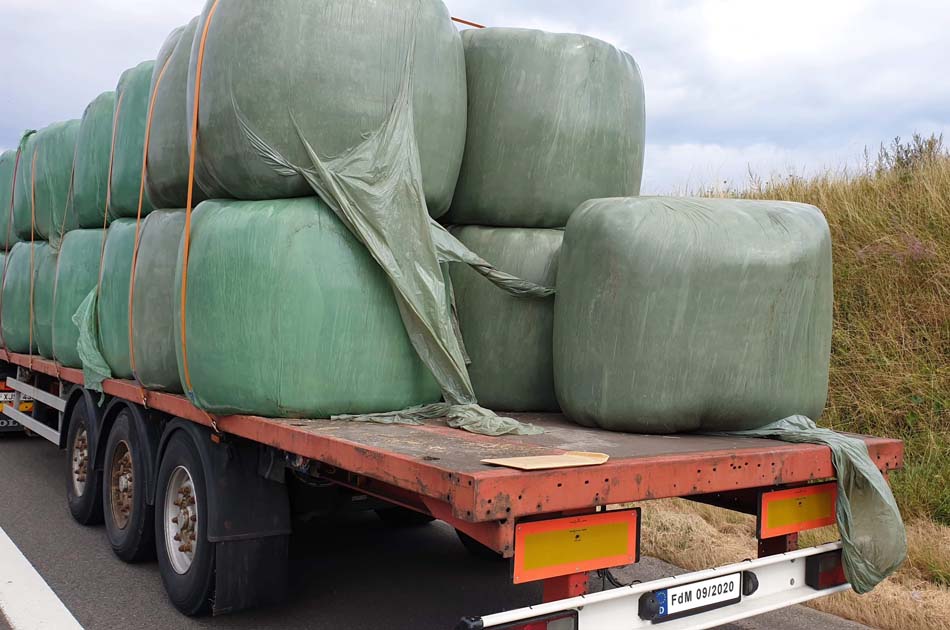 This was where they were supposed to be, even if they had got bored of being there. The securing method? Of course, it was the dreaded tie-down lashing again. And how do tie-down lashings work again? Ah, yes! The vertical component of the pre-tensioning force in the belts “artificially” increases the weight of the load, thus increasing friction. It seems that didn’t quite work here.

But we weren’t there, so we can only hazard a guess. Since this was the last row on the loading bed, we can only assume that the movement was a combination of tipping and rolling. Tipping is a kind of rotary movement around the rear edge of the silage bales. During this movement, the bales have to rest on their “edge” a little. If a crate tried to move in this way, it would have to lift slightly. This would immediately tighten the belt considerably and thus stop any “rotary movement” on the part of the crate. Things are a little different with the silage bales. They have “round” corners and they are much softer than a crate. This allowed the belt to push into the bales. It had no choice but to make the rotary movement as well and fell from the loading bed “undamaged” (i.e. without being torn) along with the bales. The bales rolled or tumbled a little further and then stopped. We have already mentioned that they represent a danger on the road. Anyone who doesn't believe this, should a look at the Photo of the Month from August 2016…

So what is the correct way of securing silage bales like these?

There are vehicles that have metal bars on the sides, perhaps 30 to 50 cm high. This prevents bales that have been loaded with the winding axis parallel with the direction of travel from rolling off to the sides. A third bale can be loaded in the “saddle” at the top. A tie-down lashing can now prevent the bale loaded on top from rolling out, just like a direct lashing.

It is a little more complicated to load bales onto a loading bed like this one. Before loading starts, belts are laid out to act as loop lashings. Two belts for every four bales. Wide hollow-section angle-strips must be laid on the upper edge of the load and incorporated in the loop lashings. The angle strips distribute the pressure so that the pre-tensioning force can actually act effectively (minimum securing to ensure friction). The loop lashings to the sides hold the bales securely. To prevent the bales from tipping forwards or backwards, we recommend two loop lashings in each direction, i.e. one loop lashing per layer. If hay and straw are being transported, it is essential to ensure that they are covered with a tarpaulin, otherwise the truck will constantly be shedding its load. This may not be a big deal for the recipient, but this amount of straw or hay is sufficient to block the drains if there is a cloudburst over the road. Large lakes are formed and the cars will have to cope with massive aquaplaning. Unfortunately, this is regularly a bitter reality and not just small-mindedness on the part of a few overzealous load securing columnists. 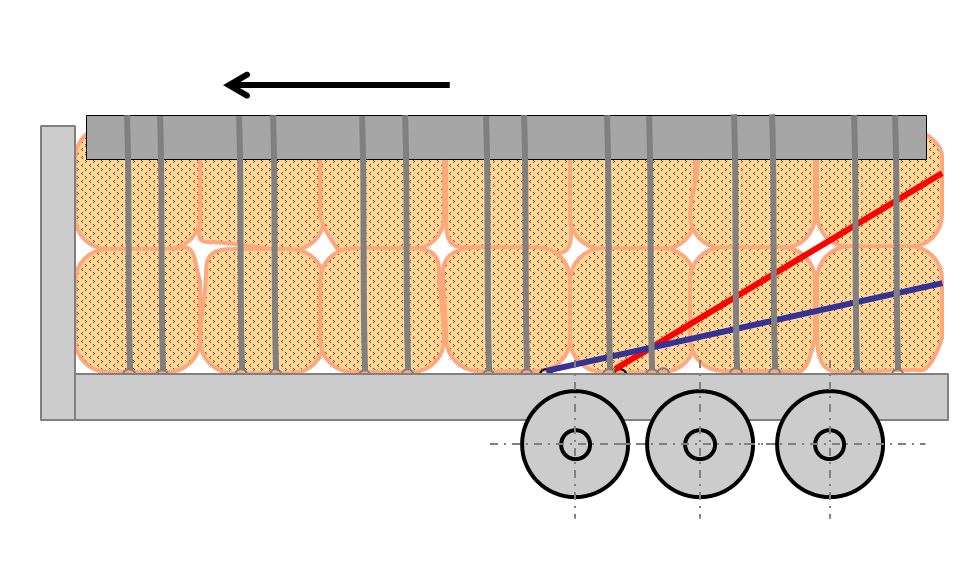 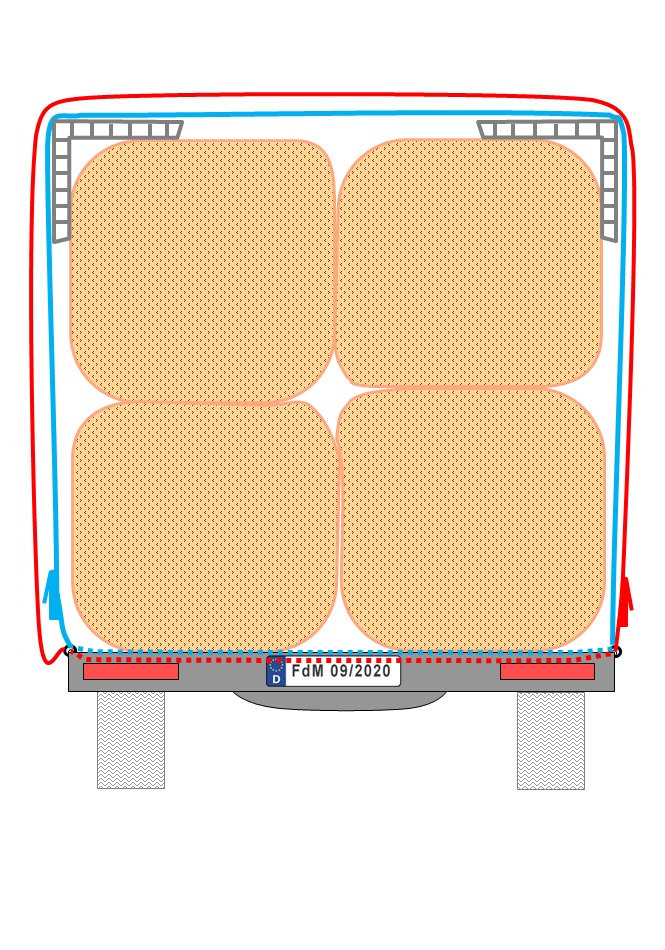 We wish you a safe and secure late Summer.
Your load securing columnists.