A small cause and a massive effect 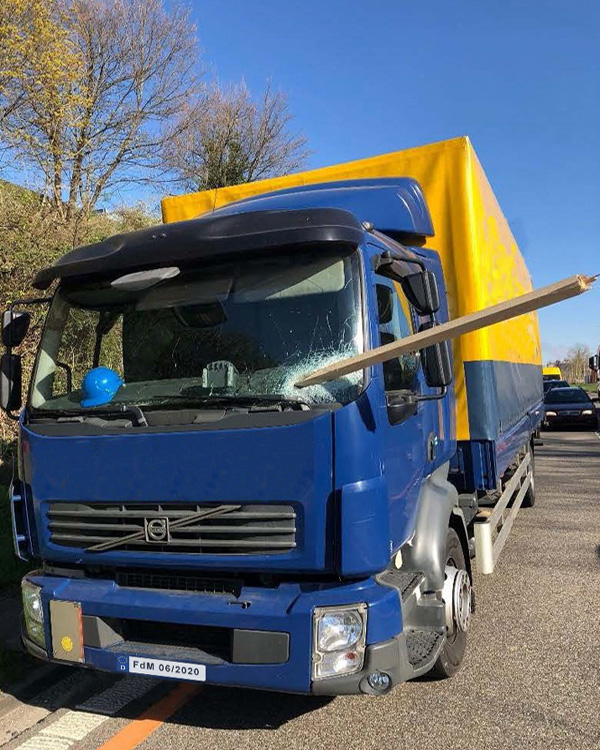 The driver of this vehicle got away with a nasty fright. It doesn’t take a great deal of imagination to envisage what might have happened if things had gone differently. 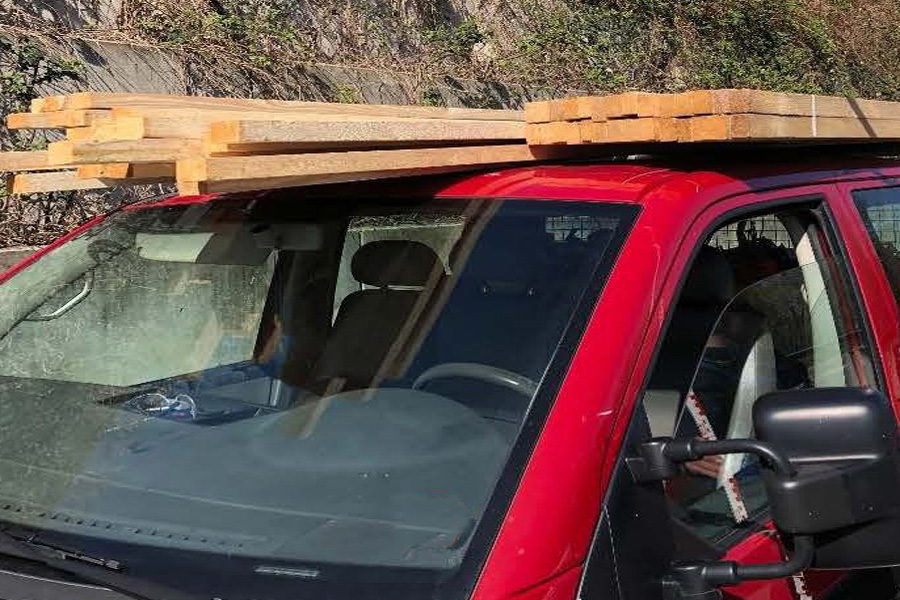 One of these battens must have come free. Unfortunately, we have no information about how the accident happened, so we are restricted to studying the photos carefully and deducing what may have happened.

Our first impression is somewhat deceptive, as the right-hand side of the vehicle suggests that things are pretty untidy on top of the roof. Somewhere, one of the battens must have been loose and worked its way off the vehicle at the back during the journey. The fact that the batten that penetrated the truck is broken suggests to us that it landed on the road, where it broke, with one half bouncing into the oncoming traffic. We could see no marks on the vehicle that was transporting the wood, so we assume that the batten did not escape forwards from the bundle on the left. The position of the wooden battens on that side and the load securing that was carried out make this unlikely, as a collision with the oncoming vehicle would undoubtedly have left its mark on the vehicle transporting the wood. 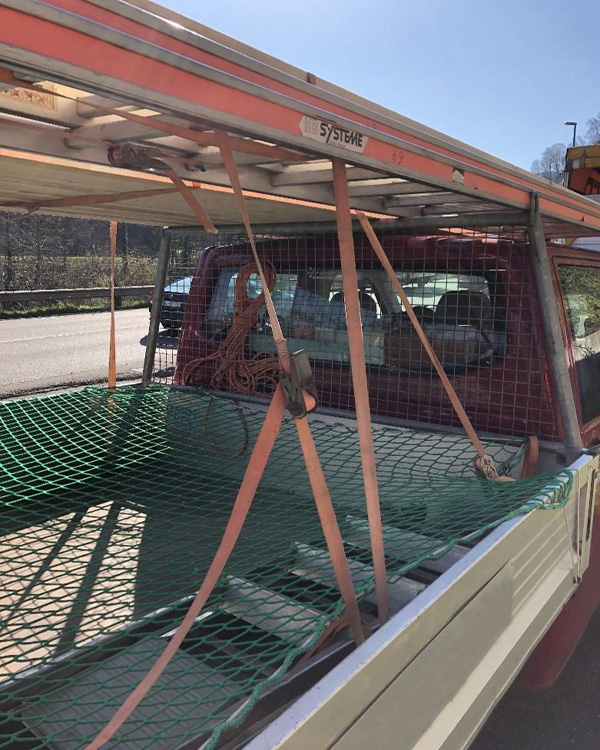 A look at the load-securing measures dispels our first impression of utter carelessness. An attempt had been made to secure the load, but as is so often the case in this column, the efforts were insufficient. 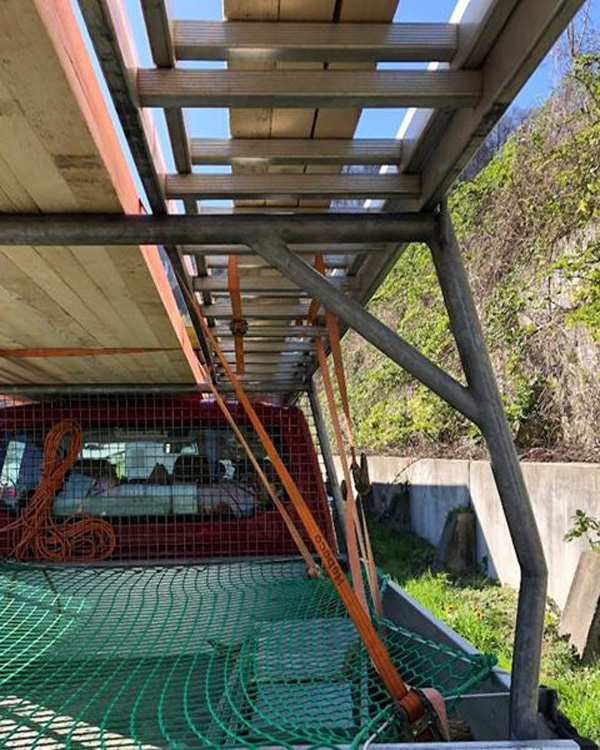 And from this perspective, the load appears to be far tidier. It looks as if at least one belt was used to bundle the wood on the left and that further belts were used as tie-down lashings. And the wood lying on the ladder appears to be “secured”. How effective this securing was is not clear from the photos. 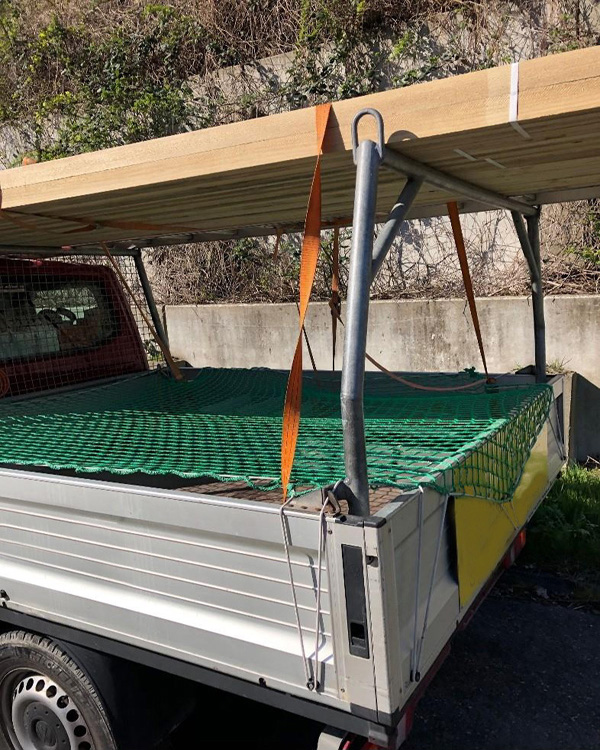 At least some of the battens have been further bundled, and the twist in the belts is probably intended to reduce wind noise. This is because belts passed over loads such as this have an unpleasant tendency to begin vibrating at a high frequency. This causes noise, and, more importantly, the belts can be damaged on the relatively sharp edges of the wood. Clearly, edge protectors should be used to deal with the second of these issues, but the problem of noise remains. The manufacturers are very critical of the practice of twisting the belts, as the length over which the belt is twisted is of crucial importance. If only a short length of the belt is twisted, this can lead to forces being concentrated on one side of the belt, which in turn causes a reduction in the lashing capacity of the belt. But in a case such as the one depicted here, we see no immediate risk of the belts being weakened.

Even though some effort had been made to secure the load, one of the battens was able to work free. Special care needs to be taken with loads carried on the roofs of vehicles and on special transport frames such as the one shown here. This is because:

We don’t have any detailed photos, so we can’t say whether the top of the transport frame is flat and whether it features any friction-enhancing material of any description. In Figure 4, we can clearly see that there are battens placed directly on top of the ladder. Ladders of this type are made of aluminium, the rungs are deliberately rounded and the metal is smooth. The coefficient of friction μ of a ladder like this is probably something like 0.1. We shall let our esteemed readers decide how sensible it is to use a tie-down lashing to secure a load like this.

The following principles apply for a load such as this:

Your load securing columnists as always wish you a safe and secure journey.