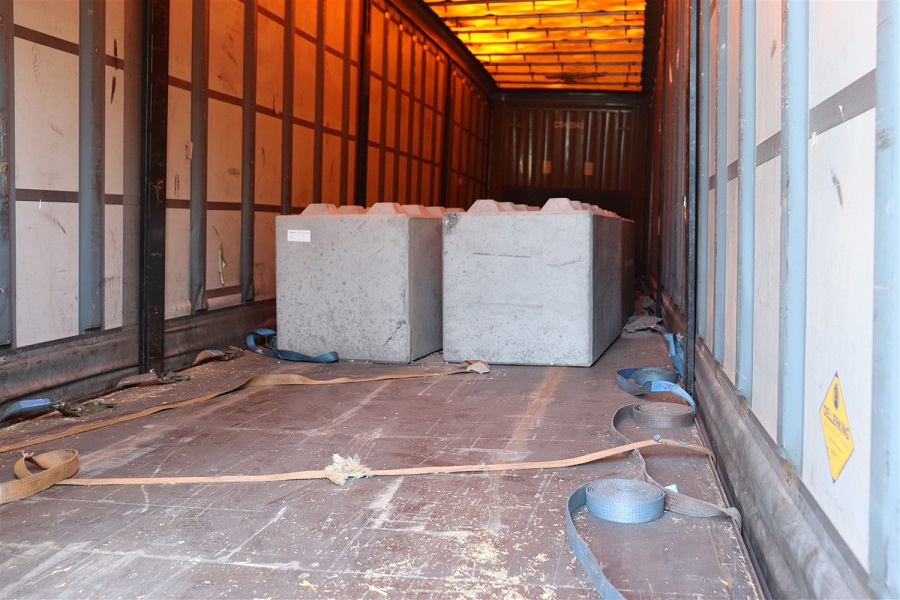 We have to admit that this month’s title is hardly exciting, but the photos remind us very much of the well-known domino effect. So what happened? Figure 1 already shows us that, to judge by the slip marks, a load of concrete has slipped forward a considerable distance. Two meters, to be precise. The concrete blocks, which seem to resemble Lego bricks, weigh 2 tonnes each and there are twelve of them. So the total weight of the load is 24 tonnes. The demands of load distribution mean that the load was spread a little over the loading bed. 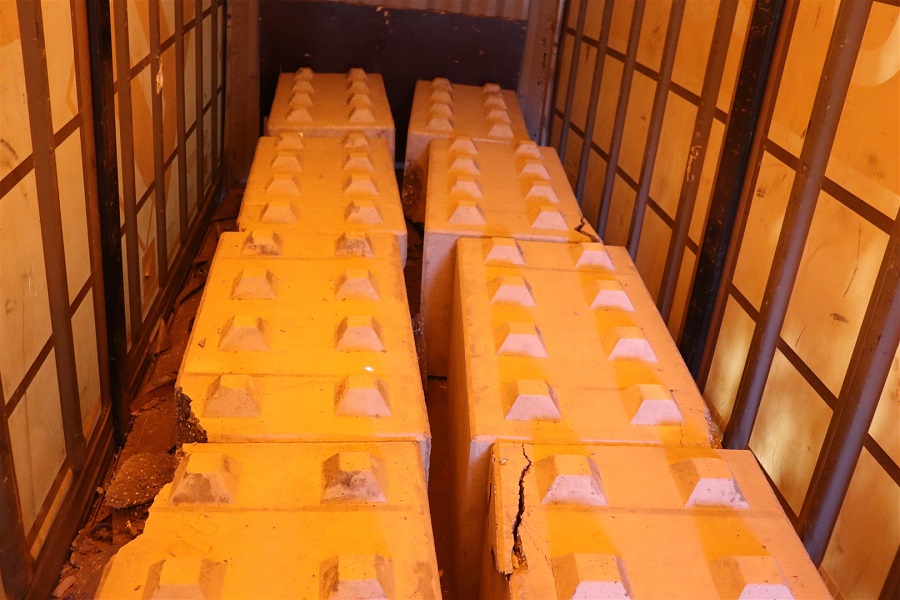 There were gaps between the concrete blocks on all sides. There was clearly plenty of space to the sides as well as to the front and back. 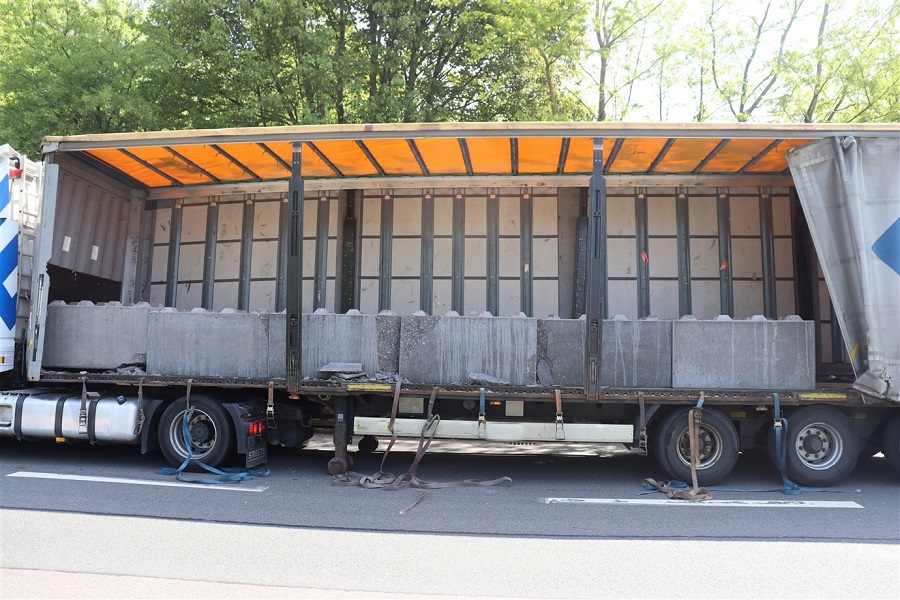 The gaps to the front were closed up quite dramatically. Every last one of the blocks started moving. The first one made contact with the end wall and the rest simply closed ranks behind. A bit like dominoes…

It must have been an impressive collision, because large chunks were broken off from the concrete blocks. This photo also suggests that the end wall is no longer quite as intact as it might be. 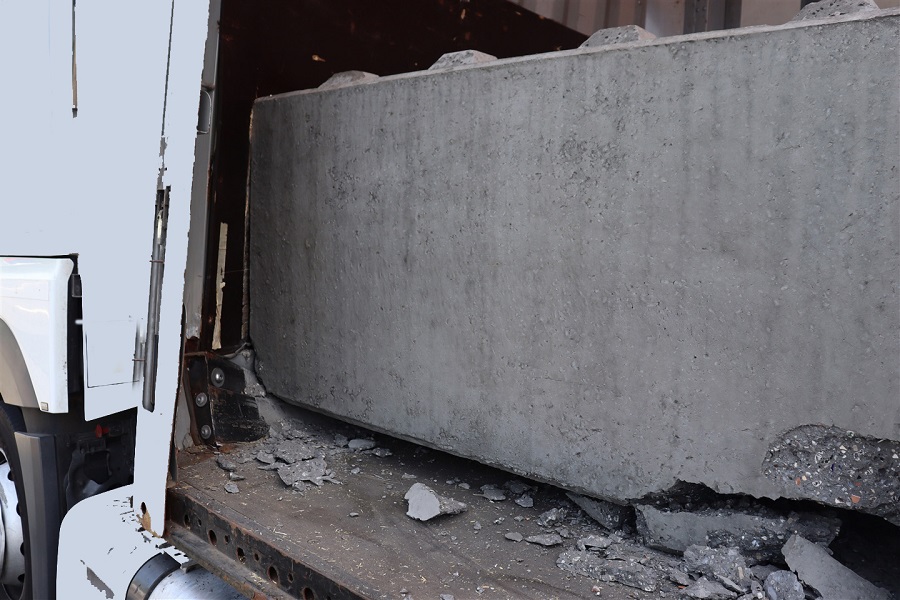 Indeed, the impact was huge, and it probably repeated itself six times. Once for each pair of blocks. The load buried itself in the end wall and permanently deformed it. It does not take a great deal of imagination to conjure up the picture of a besieged medieval town being stormed by enemy troops using a battering ram. Successfully in this case. The Code XL end wall could not provide sufficient resistance to the approaching load. It broke away and was badly bent, making the vehicle impossible to steer. The damage to the load is testament to the violence of the accident. 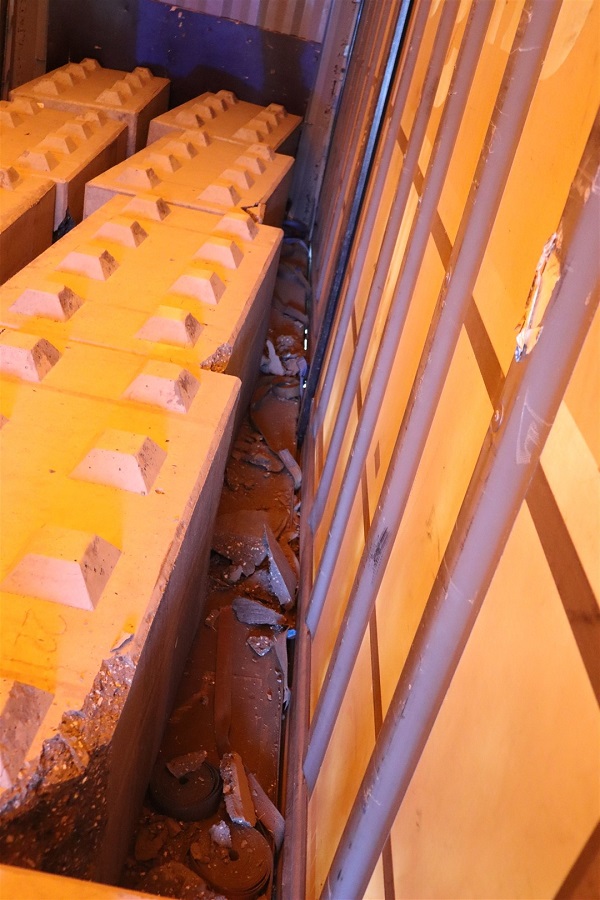 The right side resembles a quarry. Ironically, there are still some neatly rolled belts under some of the fragments of the load (clearly ready for use). But the vehicle was loaded on the basis of an entrenched understanding of physics, namely that the load is so heavy that it cannot slip. And the impressive proof that the opposite is true is plain for all to see. (The heavier it is, the more dramatic the consequences). 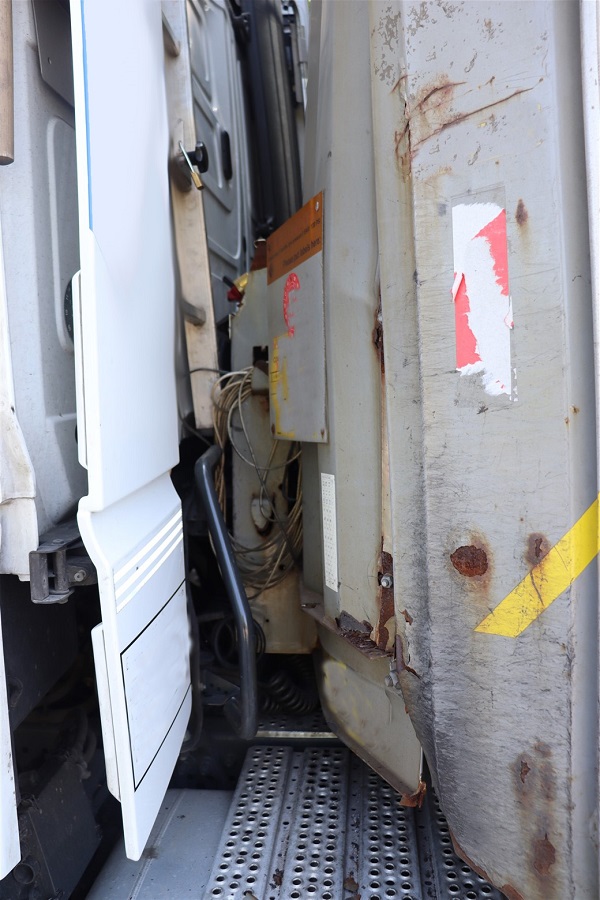 Figure 6 shows how badly the end wall was deformed. We do not know why the load accelerated, but it was definitely not an accident, merely some kind of braking maneuver. 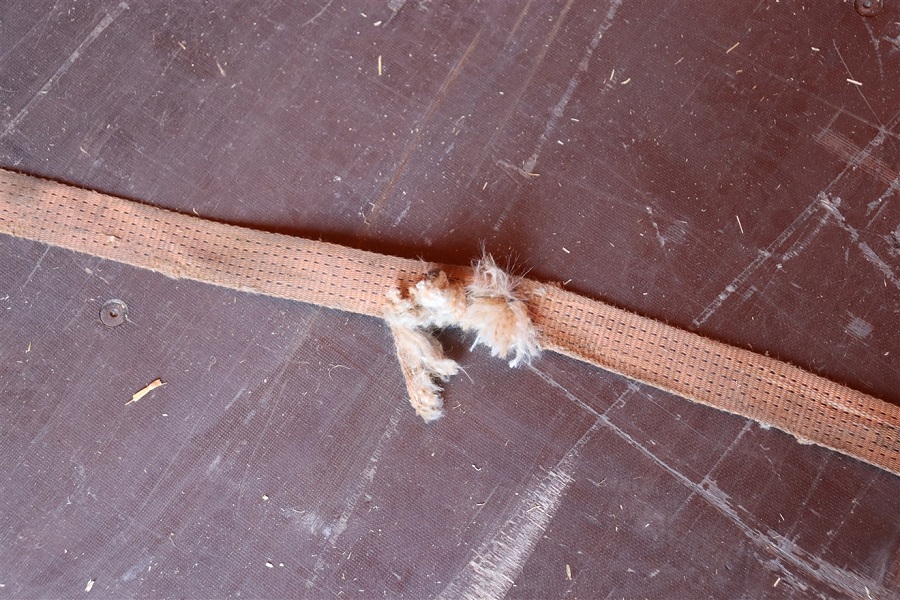 The way in which the load was secured merits a golden raspberry this year! 24 tonnes of concrete blocks loaded in pairs with gaps between them and “secured” with six tie-down lashings. Simply flabbergasting!

What on earth was the driver thinking of, and more to the point, what possessed the loading staff to load an articulated truck in this way, to “secure” the load like this and let the truck simply drive away. Irresponsible is a flattering way of describing it.

Let’s go over it again:

Using tie-down lashings without anti-slip material to secure such heavy loads is a waste of effort and material. (It simply won’t work).

Tie-down lashings are useless when there are gaps in between the load units longitudinally: The cargo will simply slip when a load is applied and all pre-tensioning force is lost.

Since this load has Lego-like protrusions on the top, it pulled the belts along a little when it slipped. This certainly increased the pre-tensioning force, but the sharp edges of the concrete either caused severe damage to the belts (see Figure 7) or cut them right through.

It is good that the load has suffered a considerable amount of damage: At least the loader will get to know about the irresponsible, ignorant way he did his job.

If tie-down lashings really are to be used, it is essential to use anti-slip material. The concrete blocks should be loaded in pairs hard up against each other in the middle of the loading bed and should be secured with three tie-down lashings.

(µ = 0.6; the remainder 0.2 times 4,000 daN gives a residual securing force of 800 daN per pair of blocks; 300 daN pre-tensioning force, ignoring angles and the friction losses at the edge protectors used, gives a securing force of 360 daN per belt, so we need at least three tie-down lashings per pair of blocks). This results in 18 intelligently attached and used pieces of load-securing equipment and a job done properly and with a sense of responsibility.

Your load securing columnists wish you all the joys of May and of course a safe and secure journey at all times.

My recommendation, which we really ought to talk about ..

This load can be easily secured with tie-down lashings.

Before the vehicle is loaded, the loading surface must be swept clean. Anti-slip material must be placed underneath the load. Two concrete blocks should then always be placed hard up against each other in the middle of the loading bed. If special loading considerations mean that this is not possible, the gaps must be filled out, for instance with squared lumber, pallets or special spacers.

And we must not forget load distribution, to ensure that the vehicle is not overloaded in any direction (right, left, front, rear).

We now calculate the amount of securing needed for each pair of adjacent blocks:

Three lashing belts are used. The pre-tensioning force applied results in 900 daN, which acts on both sides (use edge protectors), i.e. a total of 1,800 daN. Taking friction (1,800 x 0.6) into account, the securing force still needed is 1,080 daN. This ensures that the load is adequately secured in all directions.

Calculation of the number of lashing belts required: 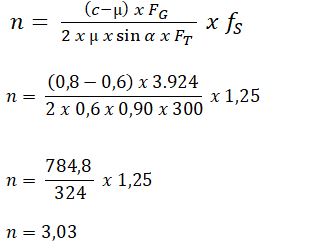 Even if we use this calculation, we just about get to three lashing belts.

To be on the safe side, belts with long-lever ratchet handles should be used where heavy cargo is to be secured with tie-down lashings. These achieve a pre-tensioning force far higher than 300 daN.

Your load securing columnists wish you all the joys of May, given the circumstances, and of course a safe and secure journey at all times.