The jackknife effect or a gravestone in search of a client 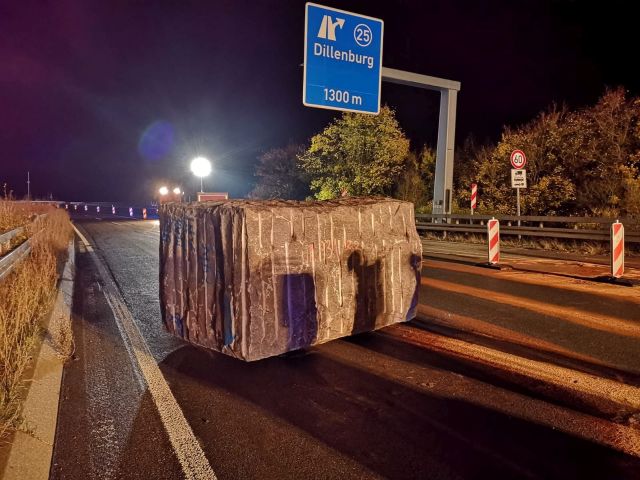 A 23-tonne granite block is not something you will often see lying around on a motorway. Which is more than enough reason for us to ask what it is doing there. Because it is nighttime and the granite block was only lit up so well much later, one might assume that the block, which was probably destined to be converted to gravestones, was on the hunt for clients. Anyone colliding with the block at 130 kph would soon be in need of such a stone, or at least part of it. 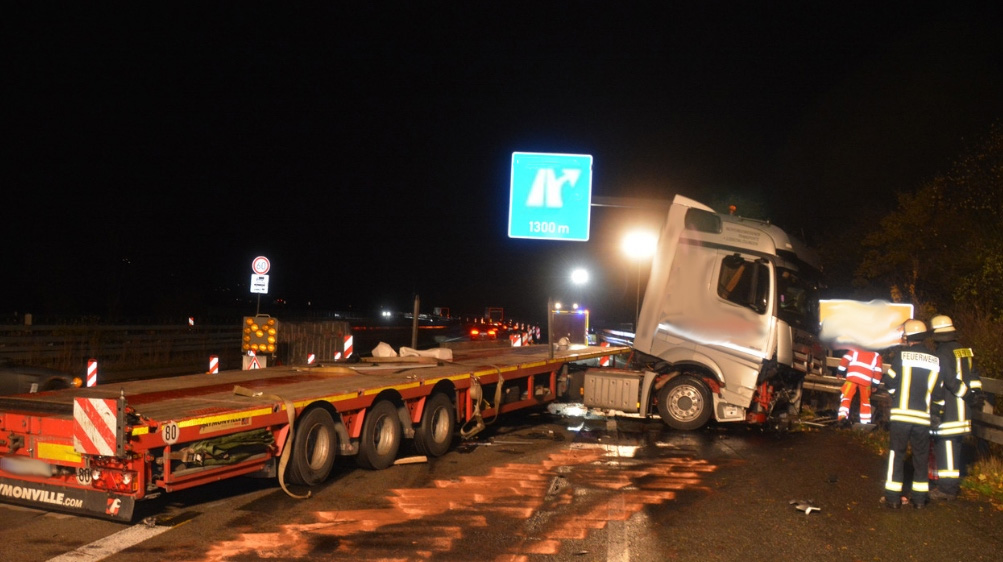 But seriously, what is it doing on the motorway and, more pertinently, how did it get there? It is not for nothing that we are load-securing columnists, and this accident would not be appearing on this page if it didn't have something to do with (dreadful) load securing.

Jackknifing is the highly descriptive term used for the situation we can see in Figure 2. The vehicle has folded in the middle like a jackknife. There are a number of different things that can cause this to happen. In this case, it is possible that the driver was trying to steer the vehicle, an action which may well have saved his life.

The block was secured as follows (see also Diagram 1): Four or perhaps even five pieces of squared lumber were stacked behind the stanchions that can still be seen in place in the loading bed. This effectively formed an "artificial" end wall. The stone block was loaded up against this wall. It was standing on three or four pieces of squared lumber, which had anti-slip material on both sides to make the best use of the good level of friction. The load was secured with tie-down lashings. This was done with three 5-tonne belts (LC 5,000 daN in a straight line). Undoubtedly this looked formidable. But any securing force provided by these belts ultimately came from the driver's biceps, Because it is only the pre-tensioning force that counts. The labels on the belts showed that they were able to achieve a pre-tensioning force (STF) of 550 daN. We shall ignore any friction over the surface of the granite block, as edge protectors were used. The angle of the belts was approx. 70°, and undoubtedly had no negative impact on the force, so we shall ignore that also. This means that we have a total of 3 x 1100 daN of pre-tensioning force. Multiplying this by the coefficient of friction μ of 0.6 gives us a securing force of 1980 daN. So far so good. 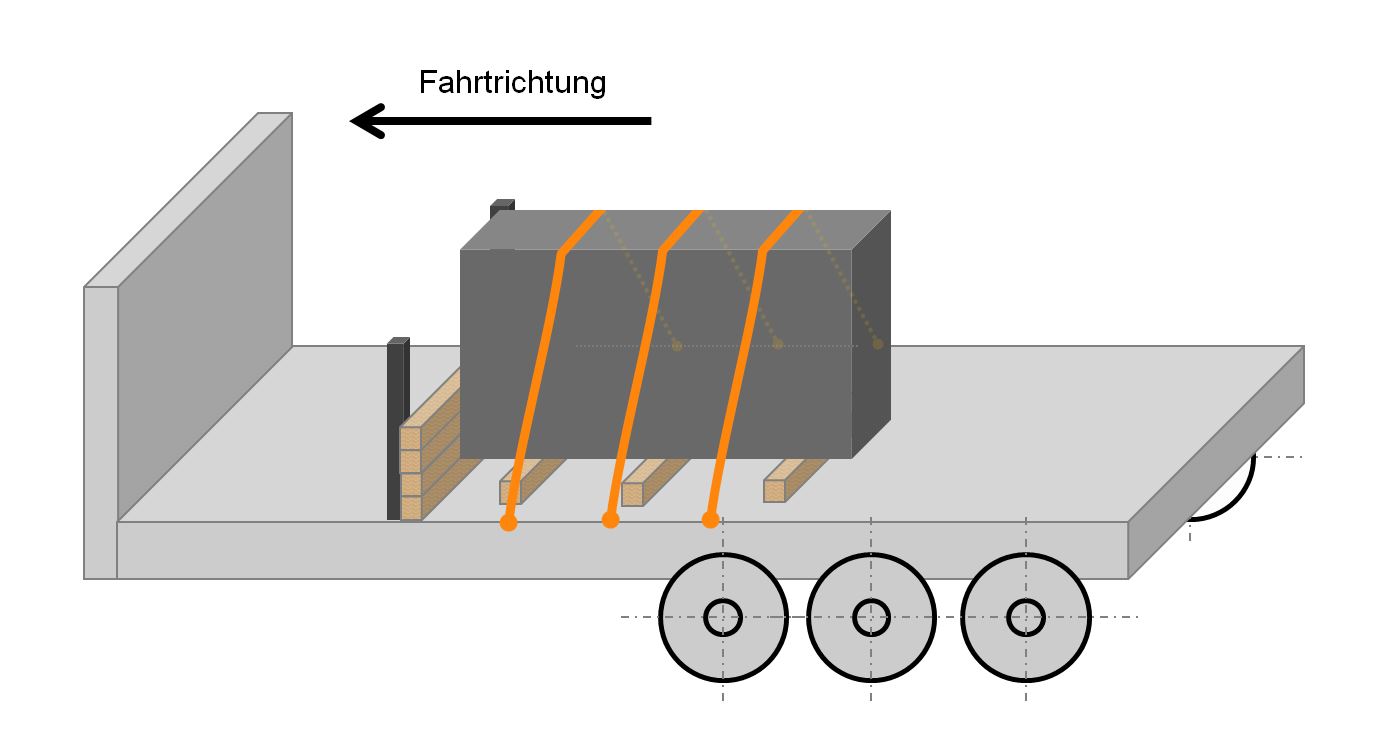 Now we shall have a look at the artificial end wall. When squared lumber is used as a support, it is thoroughly capable of withstanding a load, but when used as a cantilever beam bridging a gap of approx. 2.40 m between two stanchions, it is more a cosmetic addition than a means of securing the load. Even if we allow a "securing effect" of 100 daN or even 200 daN for each piece of squared lumber, we would, in this example, have a grand total of 500 or 1000 daN. The total securing force required would have been 23,000 daN x 0.2 = 4600 daN. Which means that even if we are extremely generous, we have a shortfall of 1620 daN.

The flaw in the securing arrangements:

With some justification, some may say that this is not a huge shortfall. So how is it that we are faced with such a scene of devastation? It is a reasonable question, and the answer is simple! As is so often the case, the squared lumber is to blame. Dunnage with a square cross section has a tendency to roll, and this is probably what happened here. The addition of anti-slip material means that the square dunnage actually becomes rectangular dunnage placed on end, since there is an additional 10 mm at the top and bottom. Again, we are reminded of our mnemonic:

According to the reports, two vehicles joining the motorway from a service station cut in front of the truck. The emergency brake assist system started emergency braking, and this apparently took the vehicle off course.

In our opinion, it is more likely that the driver tried to steer the vehicle, which is what caused it to jackknife (and save the driver's life), but there is no proof of this.

The emergency braking caused the stone block to accelerate (relative to the vehicle). In the process, it placed a load on the tie-down lashings and slipped forwards a little. As a result, the squared lumber rolled by 90 °, in other words, it tipped over. The belts became a little slack because the squared lumber was no longer so high without the anti-slip material. The tie-down force was reduced. At this point, the block was already pressing against the artificial end wall. Because part of the securing effect of the tie-down lashing had been lost, the stone block pushed somewhat harder against the "end wall" which yielded and failed as a result. And it did not end there. The squared lumber continued to roll, which increased rather than decreased the momentum of the block. We do not know when and how the tie-down lashings finally failed. Perhaps they snapped or were destroyed by the abrasive edges of the stone block, but we were unfortunately unable to obtain any photos to shed light on the matter.

This figure indicates the violence with which the end wall was torn off. This must have happened while the cab was moving to the side, as the damage to the cab is far worse on the left side than on the right. 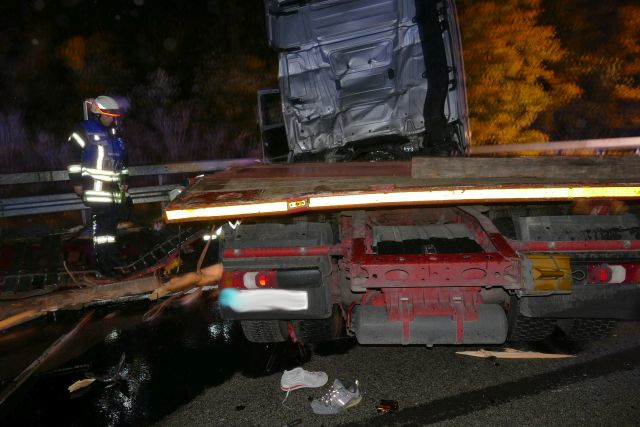 This photo clearly shows that the damage is worse on the left than on the right. The fact that the cab had moved to the side (from the jackknifing) allowed the stone block to continue traveling forwards. 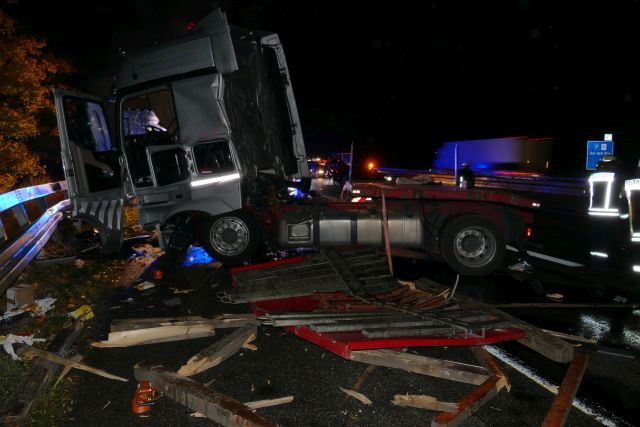 Figure 5 shows the vehicle from the "front", i.e. opposite to the direction of travel. The end wall that has been torn off is lying on the road, covered with load-securing material. Several broken pieces of squared lumber that had originally formed part of the artificial end wall can also be seen among the debris.

This is not particularly difficult. Dunnage with a rectangular cross-section and covered with anti-slip material on both sides. Two loop lashings from each side and one cross lashing. In fact, two tie-down lashings would be adequate, as the friction is sufficient and the two tie-down lashings guarantee that the friction is never lost. But with just a little more effort (two loop lashings) we can achieve a far greater securing effect, so we shall go with the loop lashings. After all, more safety is always worth it when securing cargo. 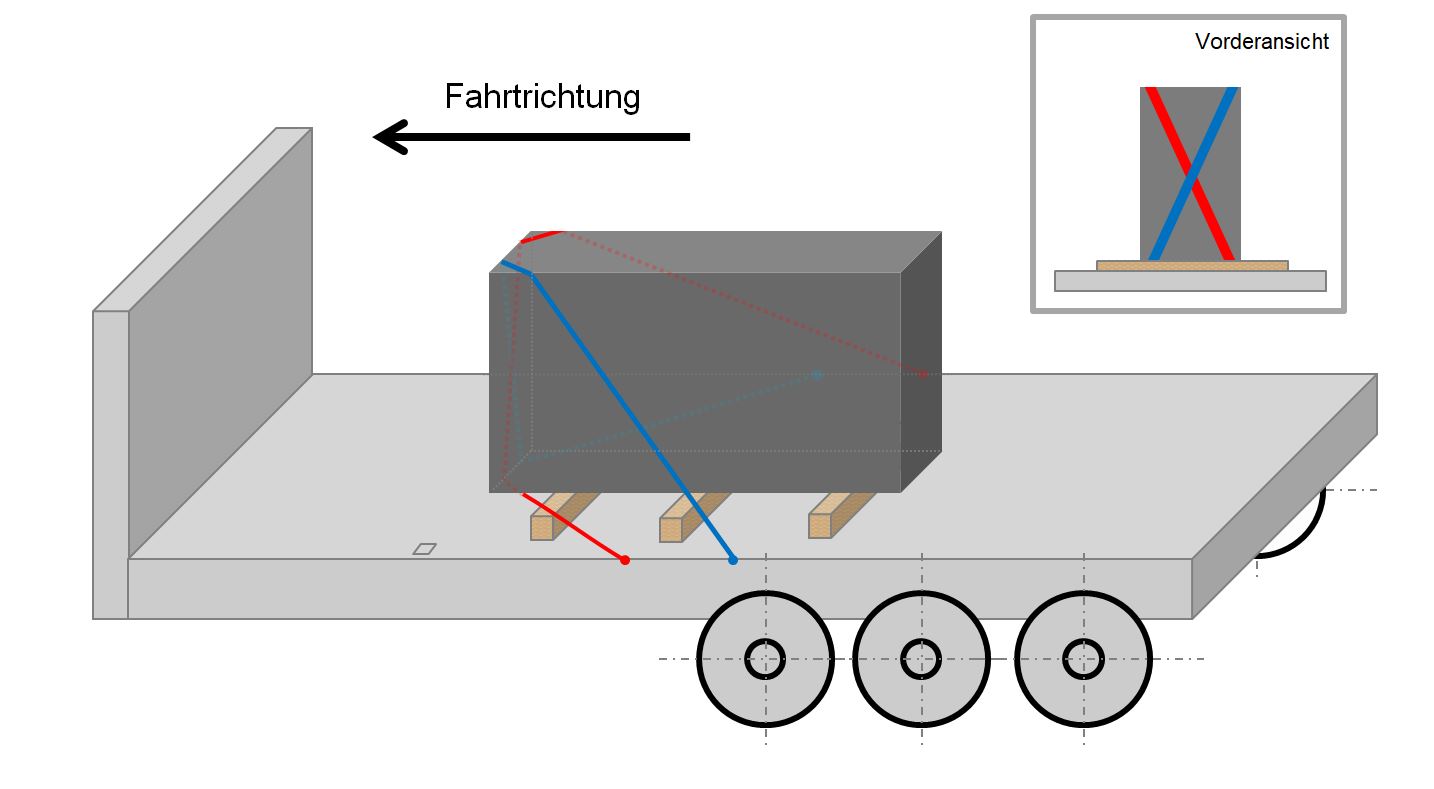 Because this vehicle is a lowloader, which is equipped with excellent load-securing points, rated at 8000 daN, this securing arrangement alone is more than sufficient.

Provided that they are attached to different load-securing points, the two loop lashings provide 2 x 5000 daN x cos Alpha 1/2 of securing force. At an angle of 70°, this corresponds to 8192 daN plus the friction of 13,800 daN. Given the considerable weight of the load and our respect for the laws of physics, this is a very secure solution. 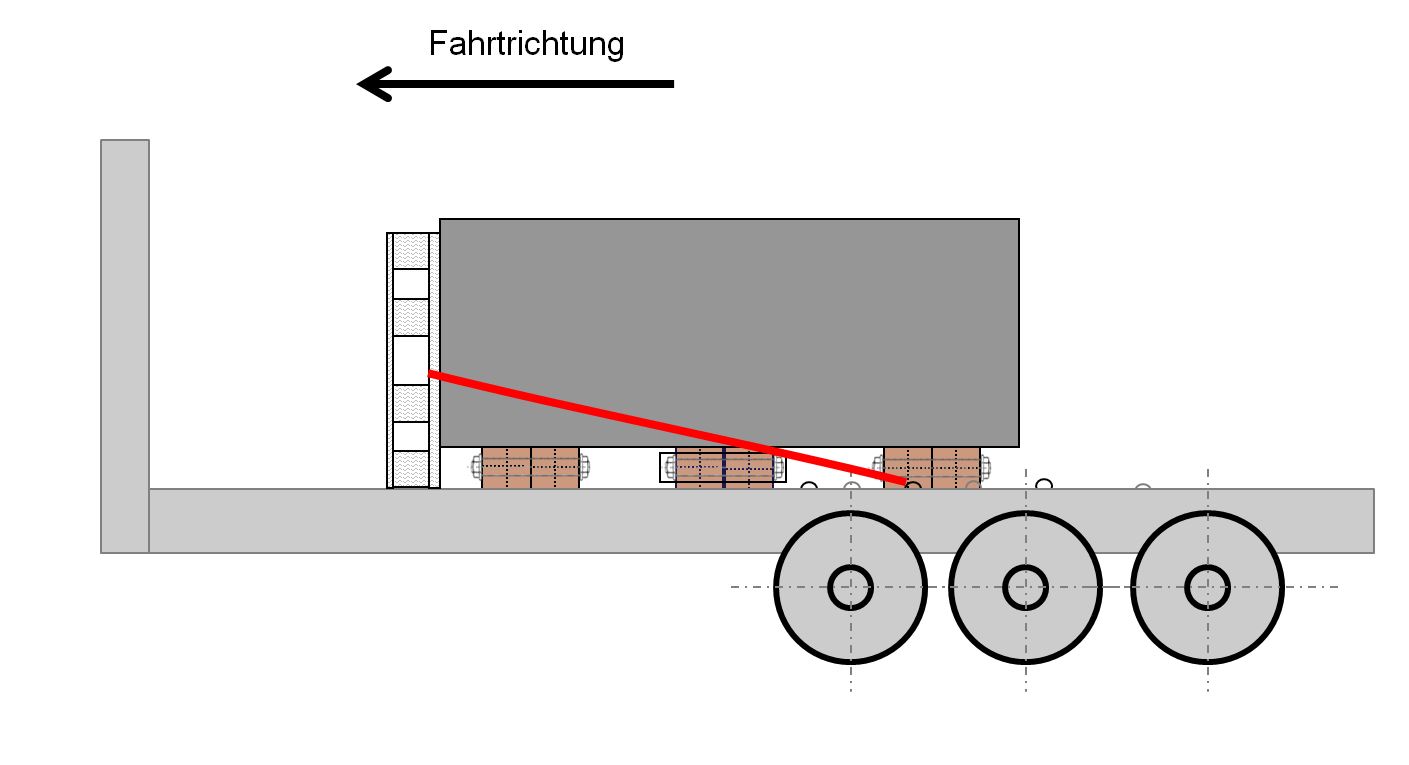 A second option would be to place a pallet in front of the stone block (in addition to the loop lashings or tie-down lashings). The belt is threaded through the pallet and cannot slip out of place. This means that it is possible to use one belt with a lashing capacity of 5000 daN to generate a securing force of approx. 9500 daN (depending on the angles). This securing arrangement would have been sufficient to provide the remaining securing force in the direction of travel.