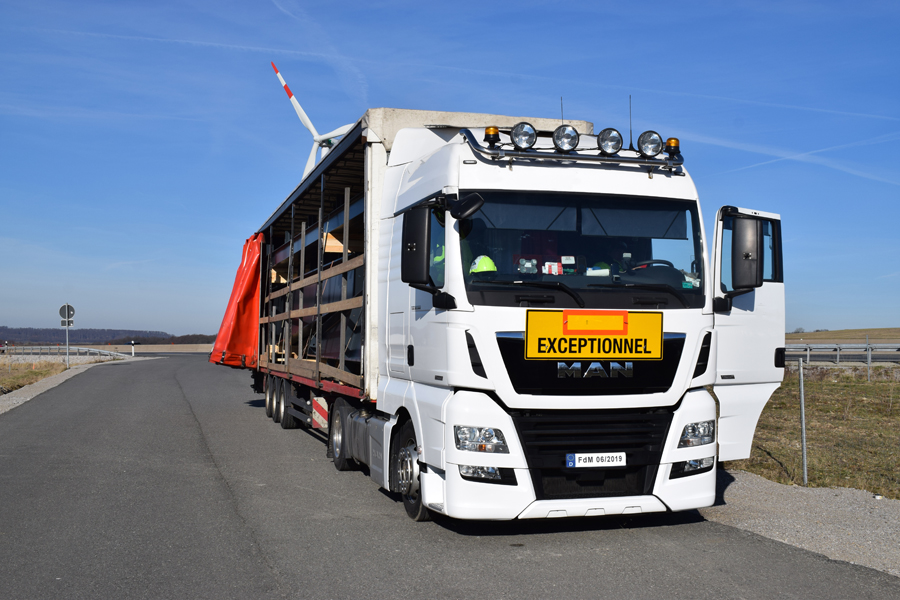 This Photo of the Month really is "EXCEPTIONNEL", and we apologize in advance for the length of this month's column, as well as for the inevitable sarcasm with which we have sometimes approached these photos. 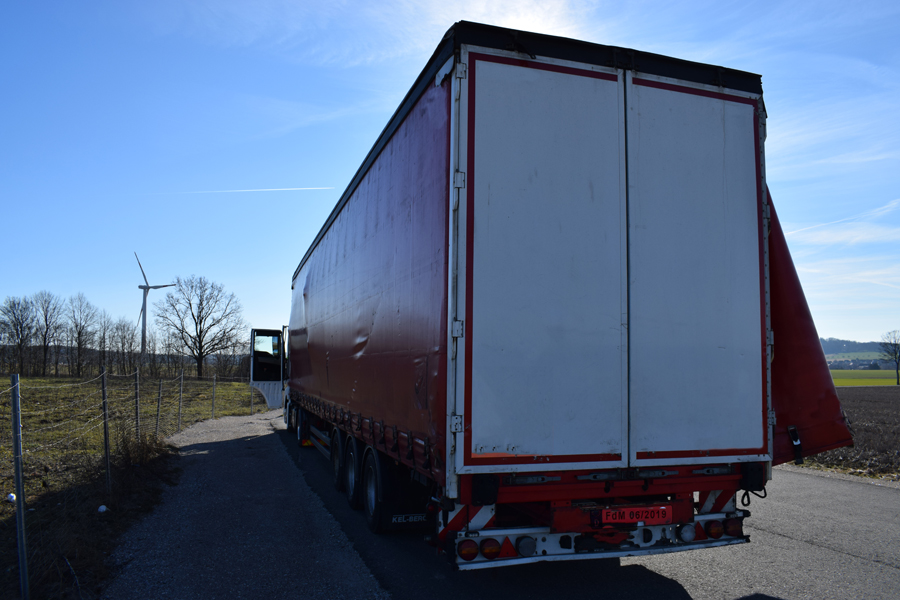 The attention of the Police was drawn to this articulated truck with its curtainsider trailer, as it had two bulges on the left-hand side. 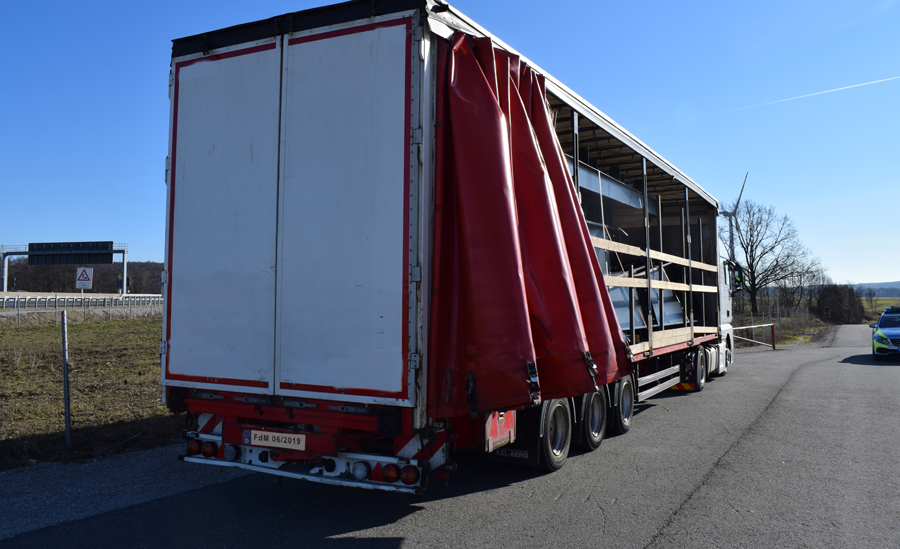 And the intuition of the police officers proved to be entirely justified. The truth was revealed when they opened up the "safe" right-hand side of the vehicle, which already suggested that the load had probably slipped to the left. We shall work our way through the load step by step in order to show and discuss as many of the peculiarities of this load as possible. 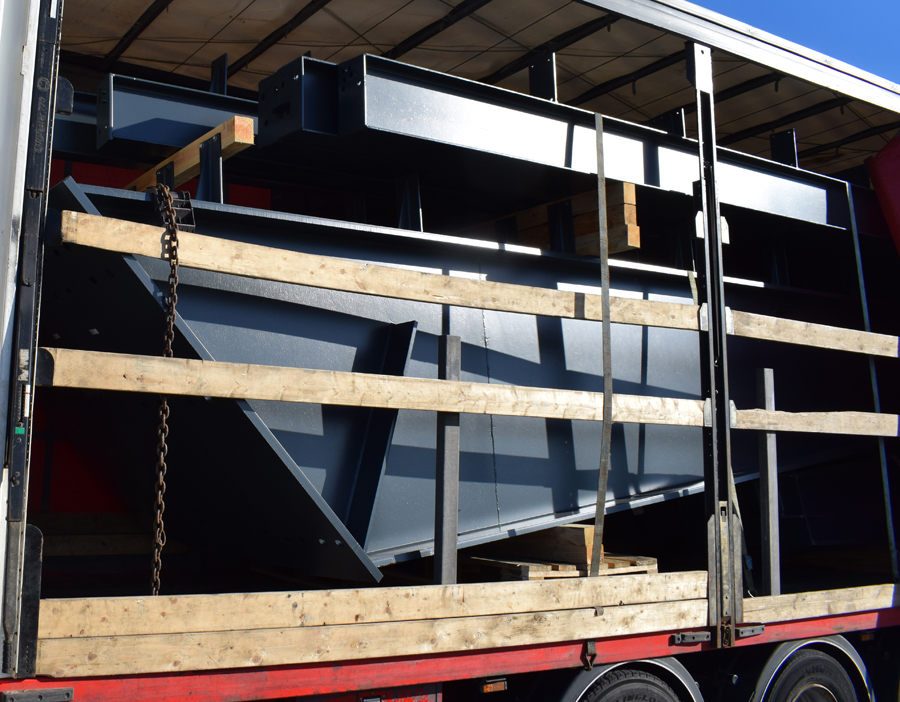 Let's start at the back of the loading bed. This picture alone shows the creativity involved in the loading process. The load is a full load of steel parts (approx. 24 tonnes), which are rather irregularly shaped. They were loaded on top of each other in several layers and were separated by wooden dunnage in order to protect the paint on the steel parts a little. The pieces of dunnage were artistically stacked on top of one another. At the bottom, two pallets were stacked on top of each other to compensate for the height. And, to ensure that the load on the pallets was concentrated on one point or line, two pieces of squared lumber were stacked on top of one another. Towards the top, close to the third collapsible stanchion, three pieces of squared lumber were also stacked on top of each other. The securing measures consisted primarily of tie-down lashings, which were made up of, on the one hand, a belt that was artistically twined around the removable slats and, on the other hand, a chain that was no less artistically wound around a removable slat. 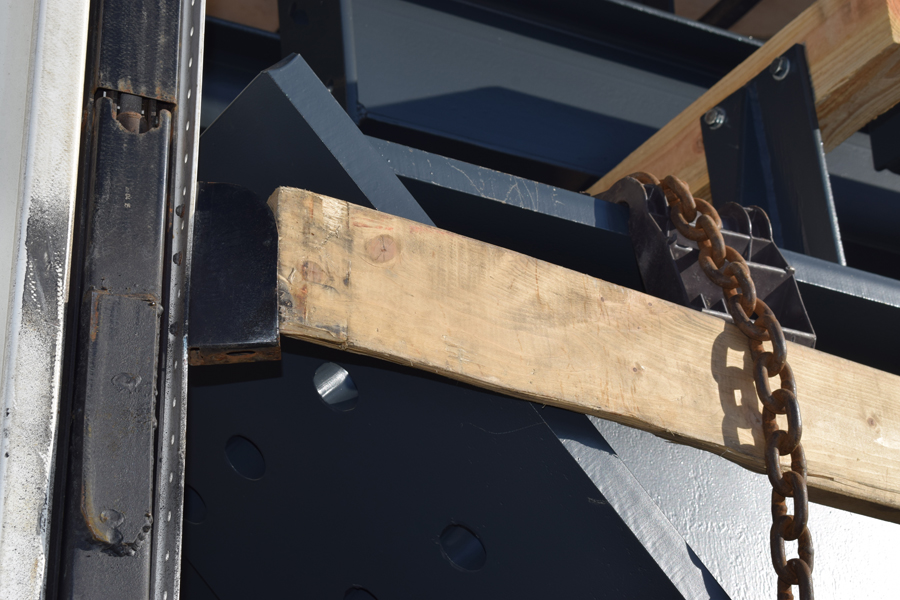 Figure 5 shows a detailed view of the point at which the chain passed over the edge of the steel part. The steel part appears to have been positioned a bit too far to the right side of the vehicle when it was loaded, causing it to push a removable slat out of its pocket. The chain was promptly passed over it not only in order to apply the tie-down lashing, but also to actually secure the removable slat. 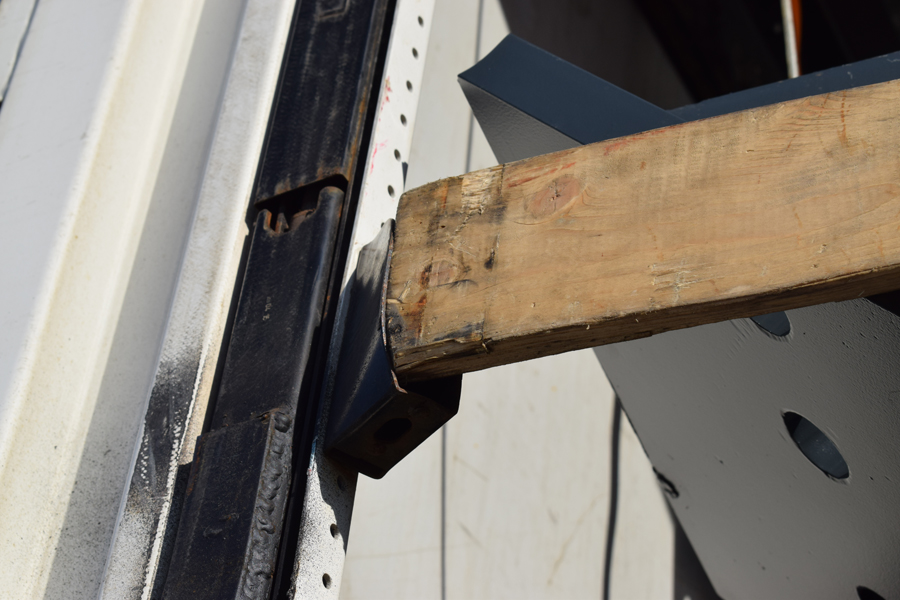 Figure 6 shows the removable slat in the position at which it was secured. 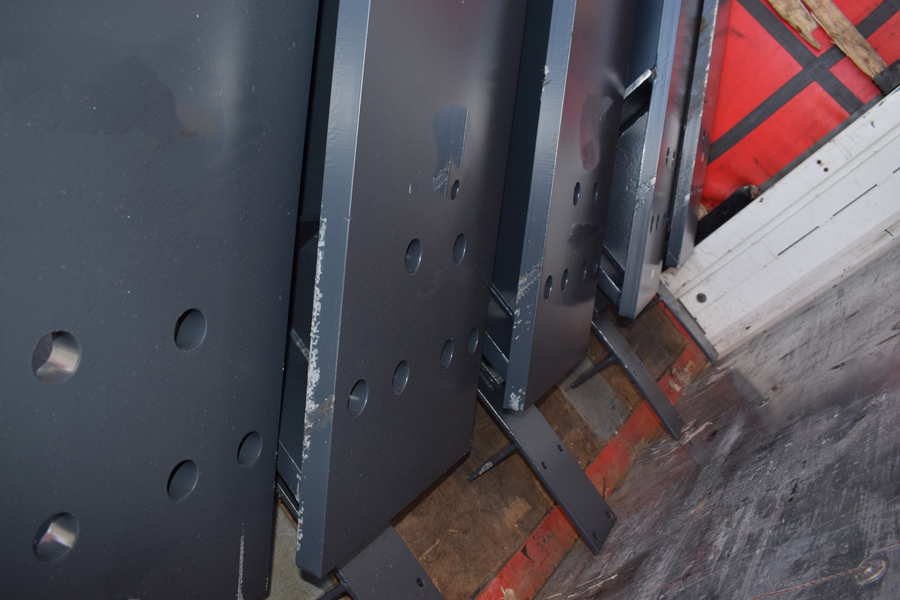 At the front, an attempt was made to achieve a tight fit between the hefty load and the end wall, after all, the sheer thickness of the material seems to be considerable. It seems that a regular reader of our monthly column was at work here, because we are constantly arguing that a sensible tight fit should always be used wherever possible. 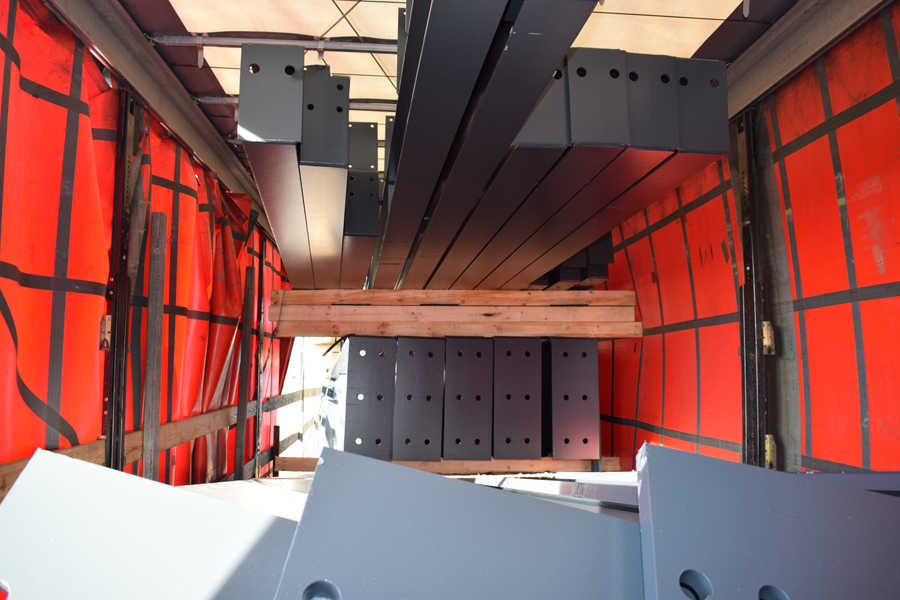 Looking at Figure 8, we have to admit that we were almost overwhelmed with excitement. We have never seen such a rich artistic assortment of load securing disasters and faults, seasoned with mistakes. In the foreground we see the steel girders, which have all tipped neatly to one side of the vehicle. Above this, we can see the steel girders artistically stacked in the second and third layers. Those who read this column regularly may have stumbled over our remarks about squared lumber before. Because a square is very close to a circle in shape, square-cross section lumber will roll particularly easily. But if they are stacked as elegantly as in this photo, they will not only roll but also tip and tumble over the underlying load if the vehicle brakes. In the process, the tie-down lashings will suddenly lose their pre-tensioning force and, in addition, any securing effect they provide, which was no more than a couple of percent anyway. As a sidenote, we should also point out that there are gaps in the upper part of this work of art, and that these make securing with tie-down lashings entirely absurd. The fact that square stanchions can also be seen on this vehicle has not escaped our notice. But they have no role to play in securing the load, as they were not included in the "complex" securing strategy. 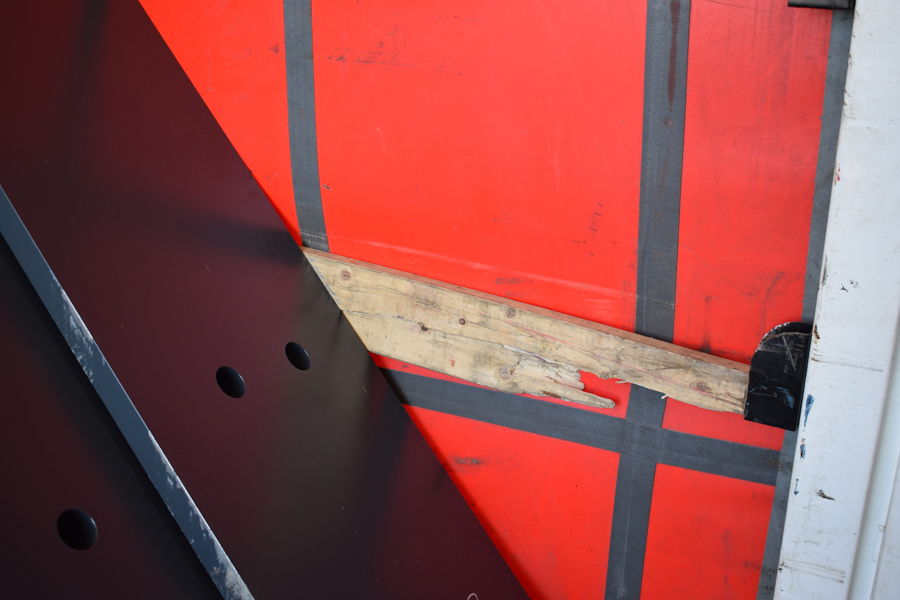 Despite being put under extreme pressure by a steel component, this removable slat is heroically hanging on in its pocket by its fingertips. All we can say is "hold on tight!!!". 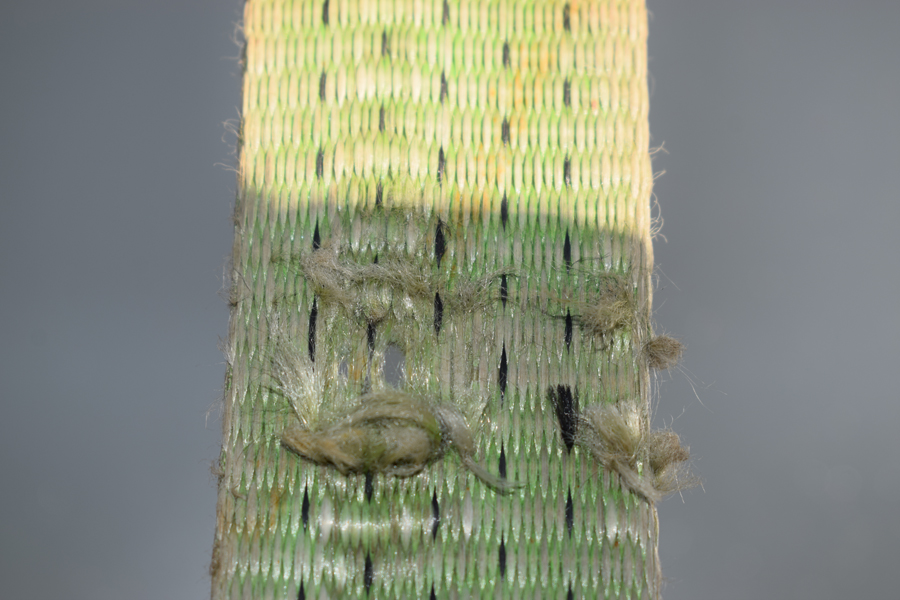 Just in case all the pre-tensioning made things a little too hot for the belts, clever ventilation slits had been cut into the fabric to prevent overheating. 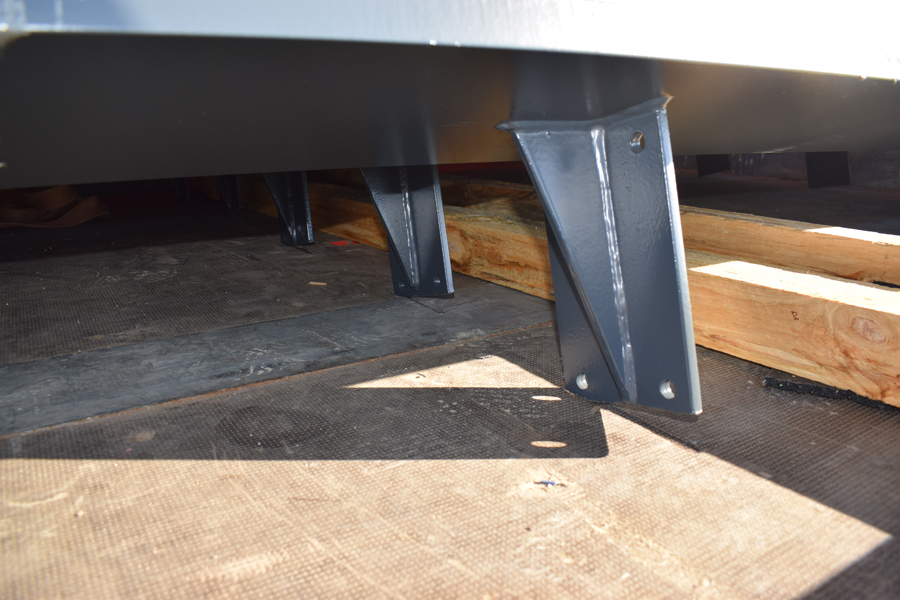 By the time we reach Figure 11, our blood is gradually beginning to boil. What does a loader have to do to get a driver to mistreat or damage his own vehicle in this way? In all seriousness, confronted with a load like this, the loader must be held at least as responsible as the poor driver. Either he was aware of his position of weakness or he didn't dare open his mouth at the loading ramp. There can be little doubt that this driver has never attended a load-securing training course, as he has not only damaged his vehicle, but has also had the nerve to take to the road with an utterly disastrous example of loading and securing. How can something like this happen? 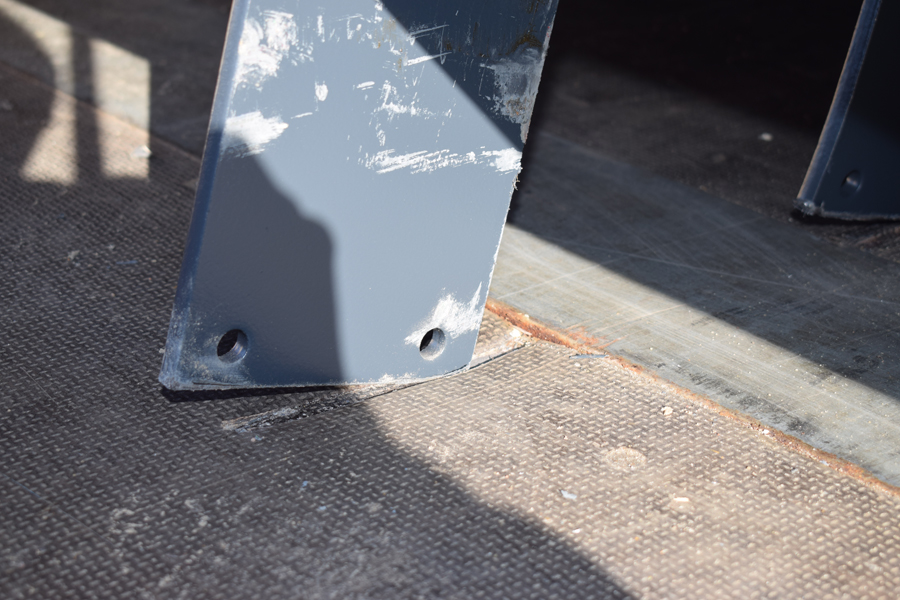 Here, pure indifference seems to have guided the loading process rather than the intention to achieve a good contact to the loading surface. The fact that the steel component in the foreground was not positioned on the longitudinal member of the trailer, which was also made of steel, is probably due solely to chance. When a loader treats the carrier's property in this way, it speaks volumes about the attitude to safety that seems to prevail in the company. We sincerely hope that those responsible have been made aware of this by a hefty fine. Not because we bear a grudge, but because we desperately want to avoid such disastrous load securing. Perhaps such a fine could result in a quality initiative. It would not be the first time. We have already mentioned the issue, but still want to revisit it at this point. At the bottom, we see two pieces of squared lumber stacked on top of two stacked pallets. Anyone who now tells us that pallets are designed to bear a load of 1 tonne, and that there are 2 x 2 pallets (stacked) in use here undoubtedly has a point. However, these pallets are subject to a linear load, and we fear that they will be bearing a weight of 2-4 times the originally planned one tonne. And then we have the elegantly stacked squared lumber. Undoubtedly, the driver will have been extremely careful when applying the brakes. 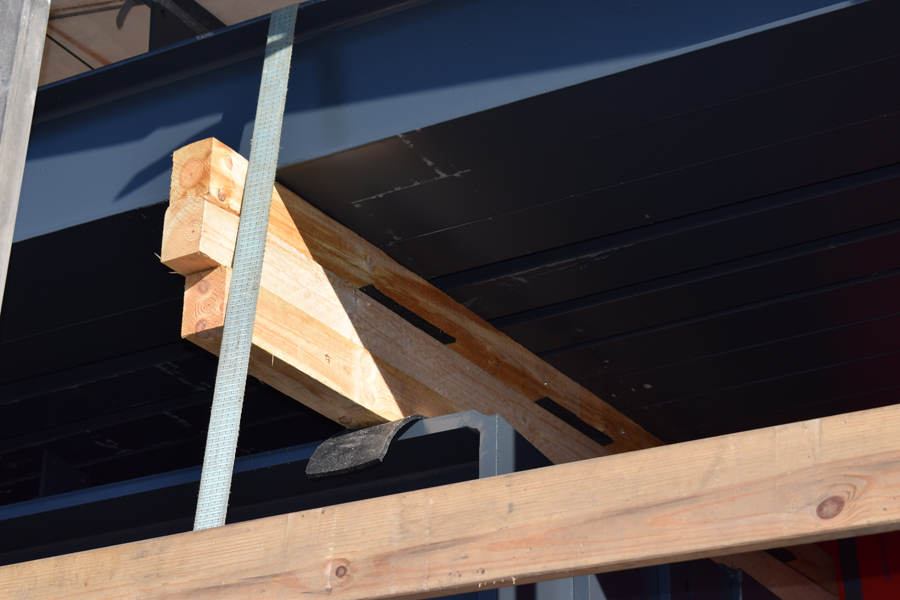 Figure 14 gives an impressive insight into how systematically the load was secured. Somebody actually took a moment to think about friction and used anti-slip materials to increase the friction as it says in the text books. The fact that this was done rather randomly fits in with the overall picture. Anti-slip material has been used between the third and second pieces of squared lumber and was used rather sparingly or not at all between the first and the second pieces. And there is even a piece of anti-slip material poking out between the first piece of lumber and the steel component. But the items of the load that are resting on top, which are what we are actually trying to secure, do not come into contact with any anti-slip material. Perhaps the driver and the loader thought that friction would not make one iota of difference to this crazy mixture of bizarre loading and stacked lumber, as the entire stack would collapse the first time the vehicle braked anyway. And if this was the case, we can only confirm their conclusions. The use of anti-slip material would have been, and indeed was, an absolute waste of time and money, since the artistically stacked lumber has rendered any attempt to secure the load pointless. 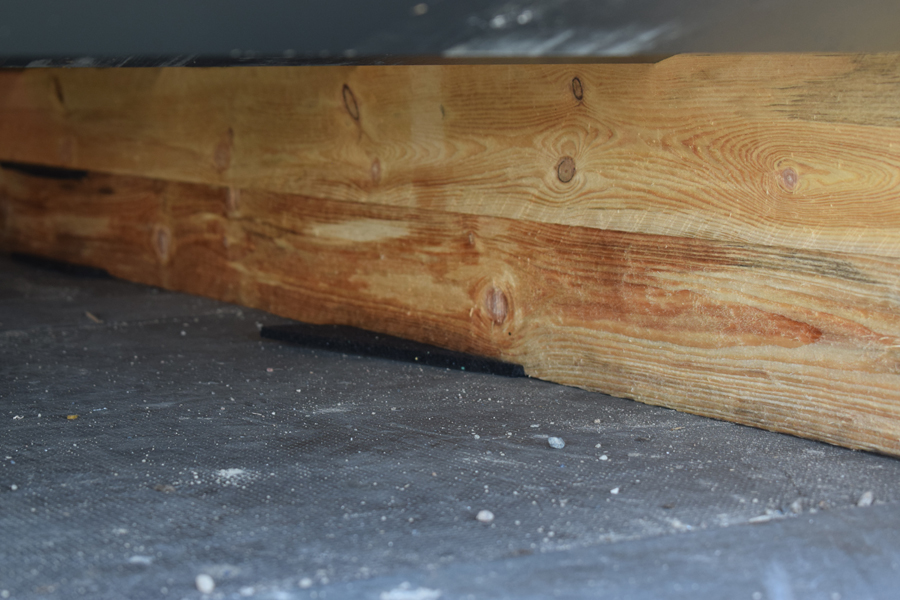 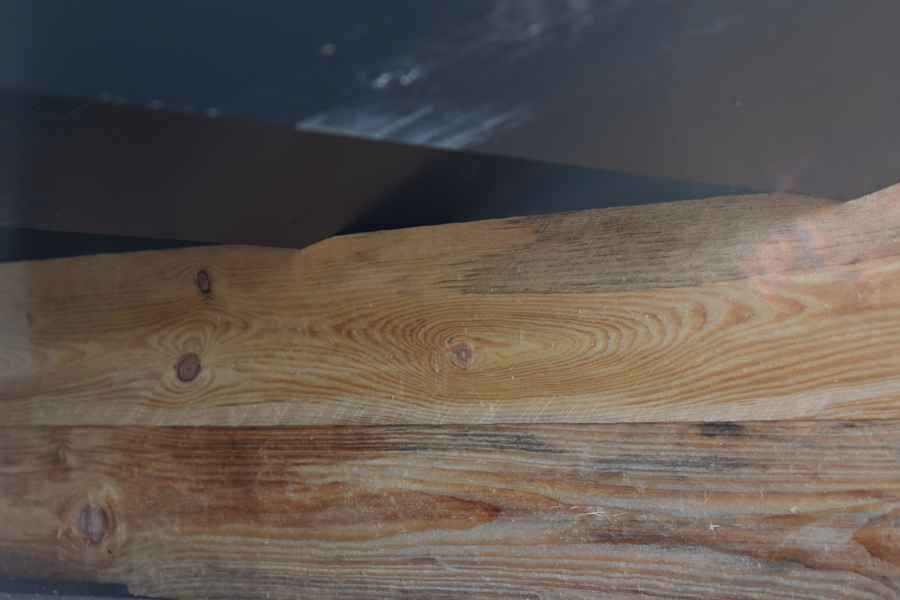 Figure 16 shows a couple of things: Firstly that there is no anti-slip material between the load and the wooden dunnage and between the pieces of dunnage themselves, and secondly that the steel components have already worked their way into the wood as they have tilted. If you want to take something positive from this, then it is the "tight fit to the side" that has resulted. 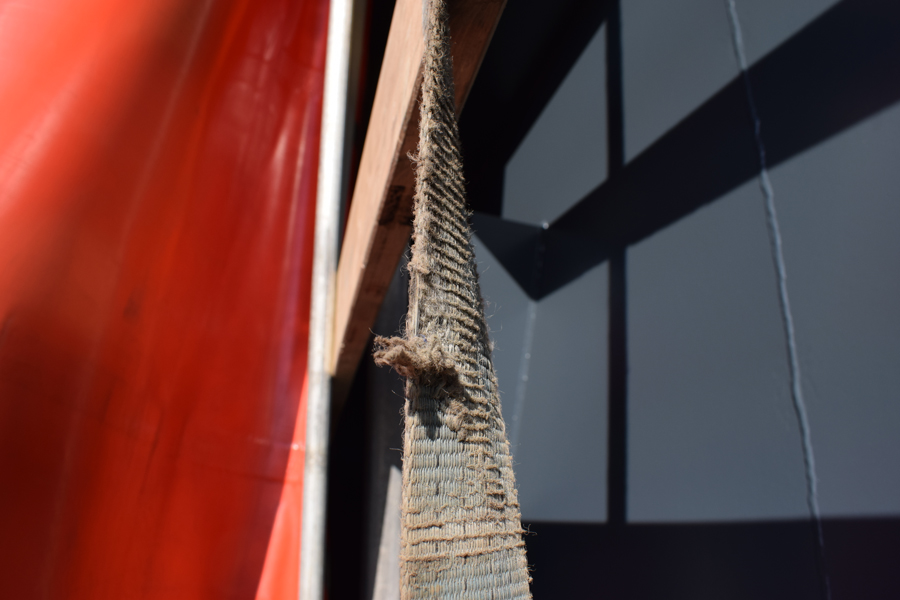 It is not just the case that the belts in this vehicle's load-securing material featured "ventilation slits". Far from it!. This vehicle and its load-securing material reveal virtually all the criteria that would qualify a belt for scrapping. Figure 17 shows a belt that has been used well beyond its useful life. Centimeter for centimeter along its length, it meets all the scrapping criteria, including a place where it looks more like a shaving brush than a piece of securing material which is supposed to prevent about 24 tonnes of steel from injuring or even killing somebody. 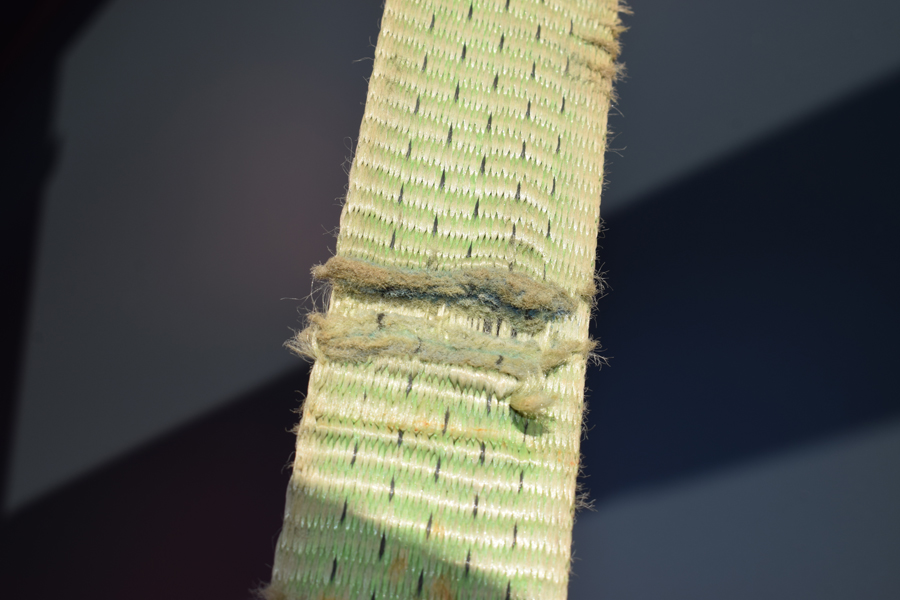 This belt, too, has already experienced the rigors of use. At this point alone, it meets the scrapping criteria perfectly. 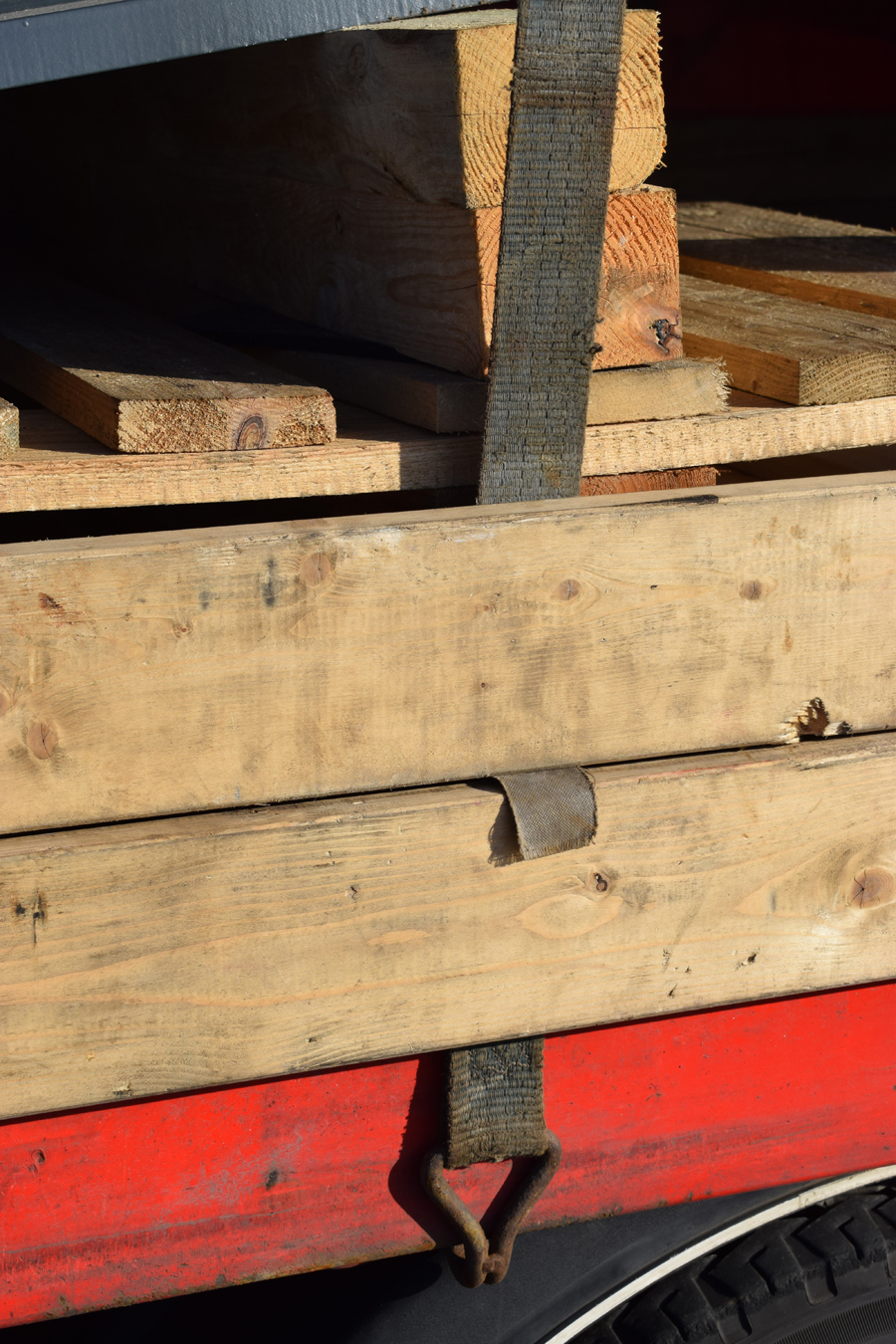 At the risk of appearing petty, we would also like to point out that the belt in Figure 19 is not only pushing the removable slats out of position, but is actually not fit for use, as the hook is only loaded on its tip. There is a clear gap visible at the point where the hook should be loaded.

We have spent a lot of time and effort pointing out all the mistakes that were made when loading this cargo. This example alone would provide material for half a book. If a load such as this is to be transported, it must first be made fit for transport. This means that dunnage has to be constructed that will not collapse like a house of cards the first time the vehicle brakes. Where sharp-edged components can damage the loading surface, protective material must of course be placed under them to prevent the vehicle from being damaged by the load. Alternatively, dunnage must be placed under the steel components in such a way that the sharp-edged steel components can no longer come into contact with the loading surface. The fact that the load had toppled into the left-hand tarpaulin indicates that it was absolutely not bundled to form a compact cargo block. Of course, using tie-down lashings to secure a load like this is complete nonsense. Tie-down lashings may perhaps mitigate tipping and ensure that a good level of friction is actually present at all times. Otherwise, we strongly recommend using direct lashings on such loads. But it is crucial that this load has a sound foundation, by which we mean a cradle on which it can rest safely, which in turn will allow it to be secured well. The tight fit to the front was one of many disasters, because the thin metal sheets would have been forced through the end wall the first time the vehicle braked. Of course, no appropriate measures to distribute the load had been taken.

We wish our readers a safe and secure journey at all times
Your load securing columnists.