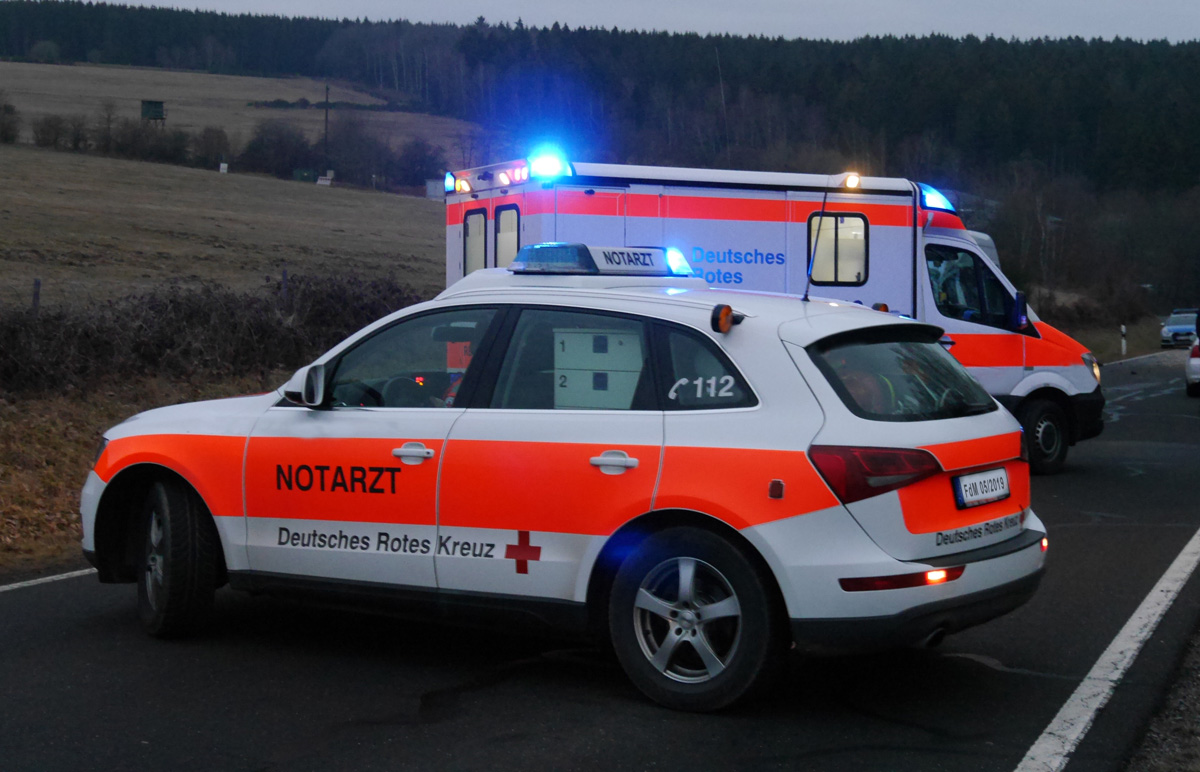 When a Photo of the Month begins with an ambulance and an emergency doctor, then something is indeed amiss. As load securing columnists, we distance ourselves from sensationalism and cheap grandstanding. We feel obliged to present the facts as clearly and objectively as we can. Sarcasm is entirely out of place the moment people have been harmed. From our perspective, however, it is important to show that inadequate load securing can and does lead to potentially fatal accidents, as in this case in which the driver of the vehicle involved was seriously injured, although he escaped with his life. 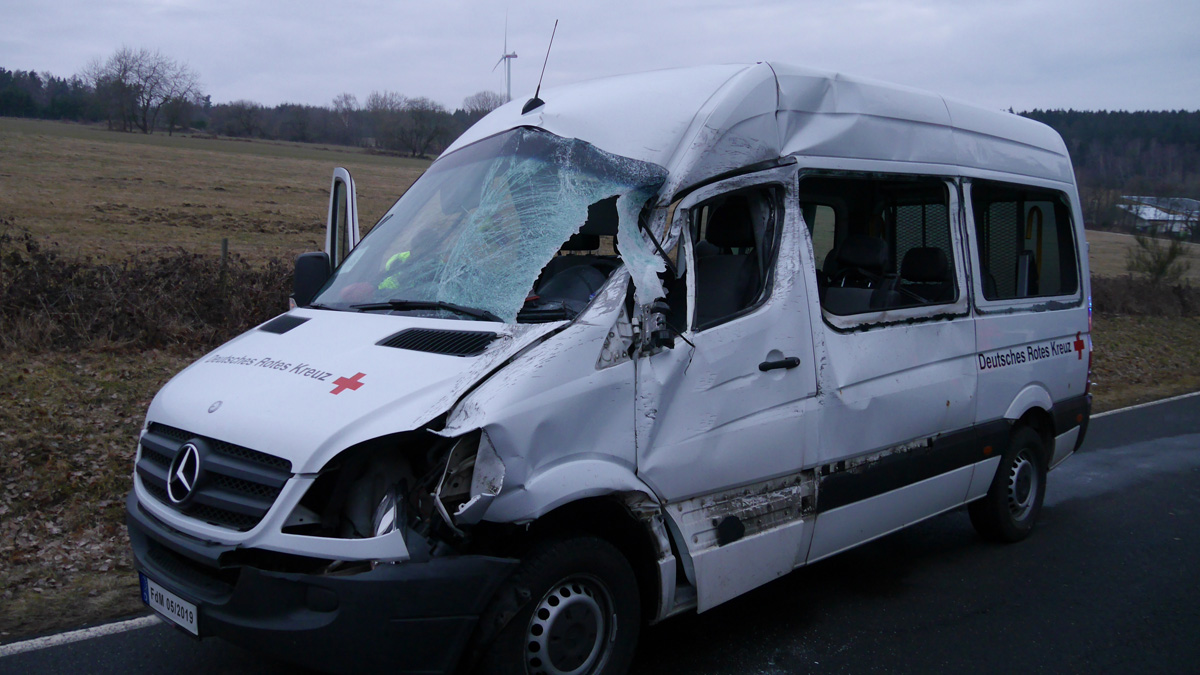 The damage to the van is substantial. The A-pillar has almost been torn off, which vividly illustrates the force that acted on this vehicle. 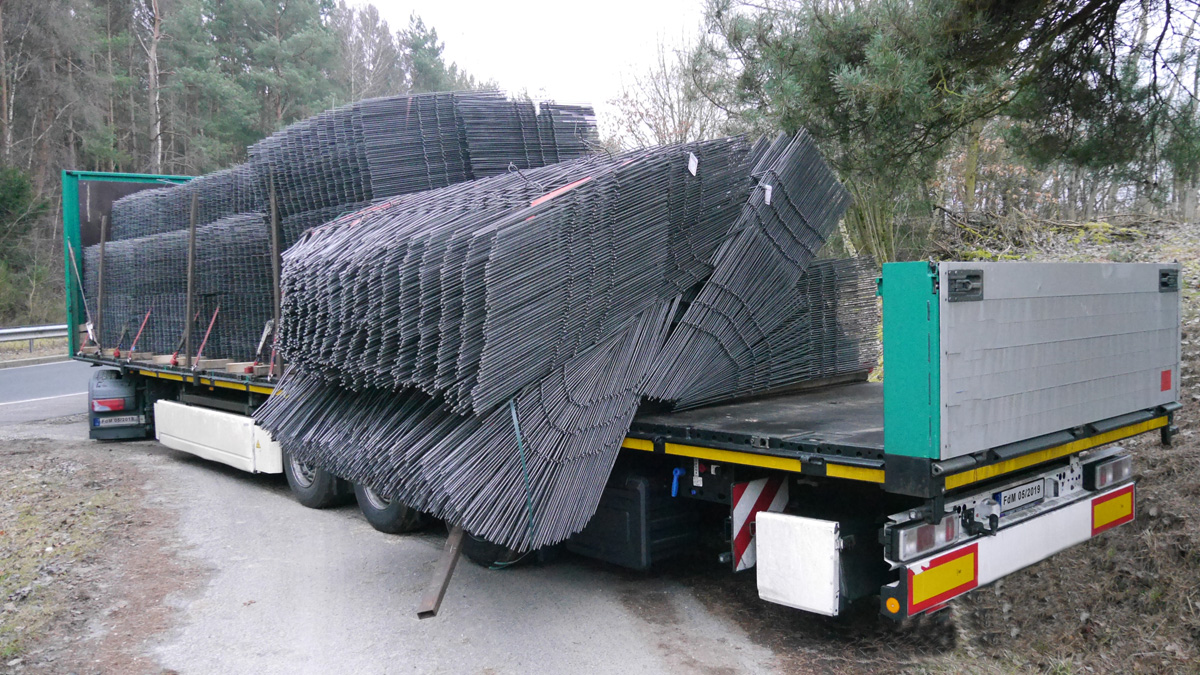 We don't want to keep you in suspense any longer and will explain what happened. Once again, the load is steel, but a very special kind of steel this time. This is steel reinforcing mesh, which is extremely difficult to secure. The coefficient of friction μ lies between 0.1 and 0.2. The flexibility of the mesh has driven many people to despair, because pre-tensioning force cannot be established, and just when you think you have reached the pretensioning force you need, it vanishes as a cross-piece breaks. The load is very bulky and ultimately also very heavy. "Heavy" always entails a lot of load securing, but this load presents any driver, and above all loaders, with almost insurmountable problems. 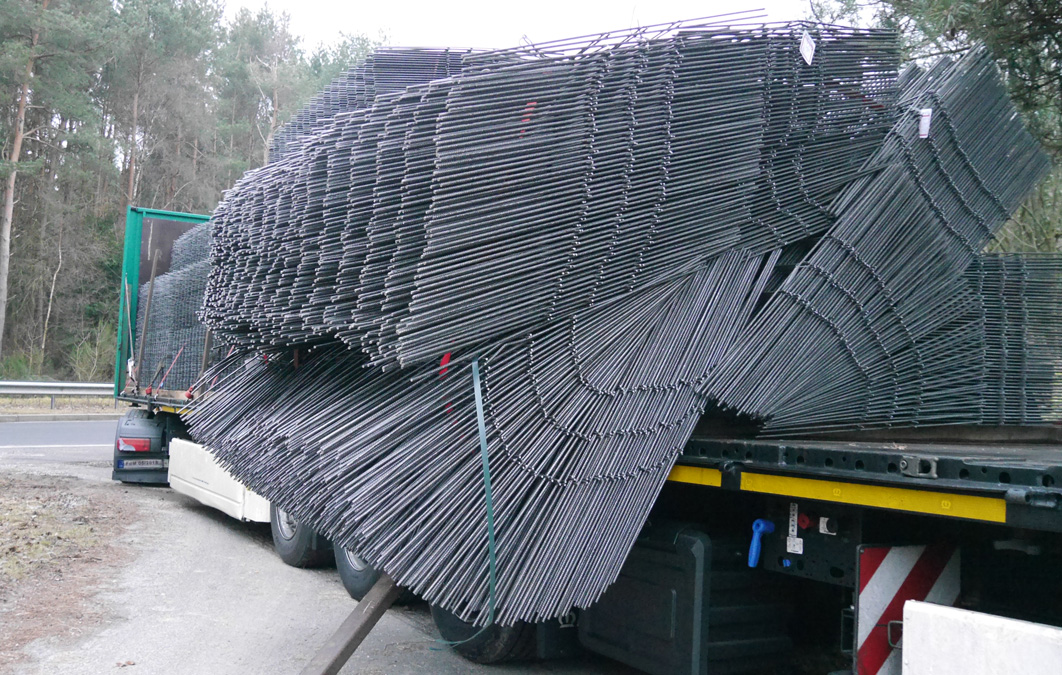 It is easy to see that the rearmost stack of steel reinforcement mesh slipped from the vehicle to the left in a right-hand bend. The tie-down lashings only restrained the load when they had effectively become direct lashings. We can see this from the fact that the load is hanging in the belts like they were a sack. The fact that one stanchion is still poking out from under the steel reinforcement mesh is worth little more than a side note, because these stanchions were not in direct contact with the load and, as the next picture will show, they started to be subjected to the load at a height of about one and a half meters. If the securing capacity (LC) of a stanchion at a height of 10 cm above the loading area is 3,000 daN, then it is only 100 or perhaps 200 daN at a height of 1.5 m. If the load is also able to "take a run-up", the effect of these stanchions is purely cosmetic and indeed deserves nothing more than a side note. 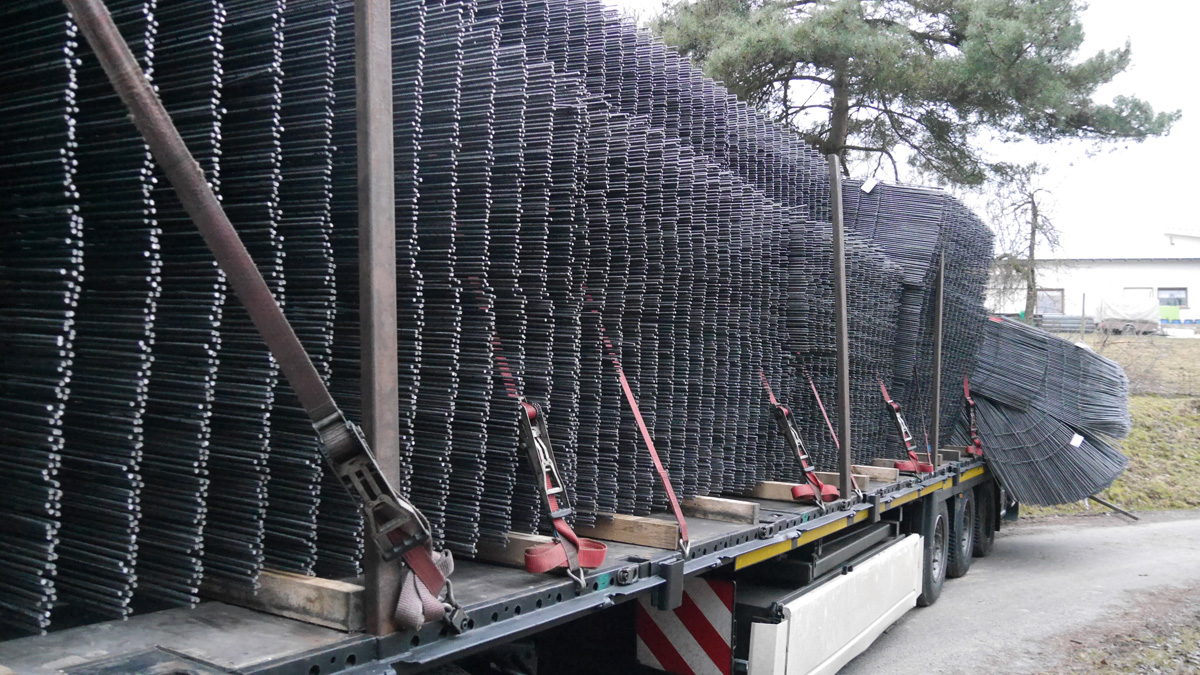 Figure 5 clearly shows that those involved at least attempted to be conscientious. Clearly they knew their load very well and secured each stack with at least 3 tie-down lashings. The fact that not all the hooks were attached perfectly is not something we want to discuss further in this Photo of the Month, as this had no bearing on the accident. We can clearly see that the rearmost intact stanchion is being subjected to a load at its very tip. This is the result of the 2nd stack of the load beginning to slip towards the left side of the vehicle. 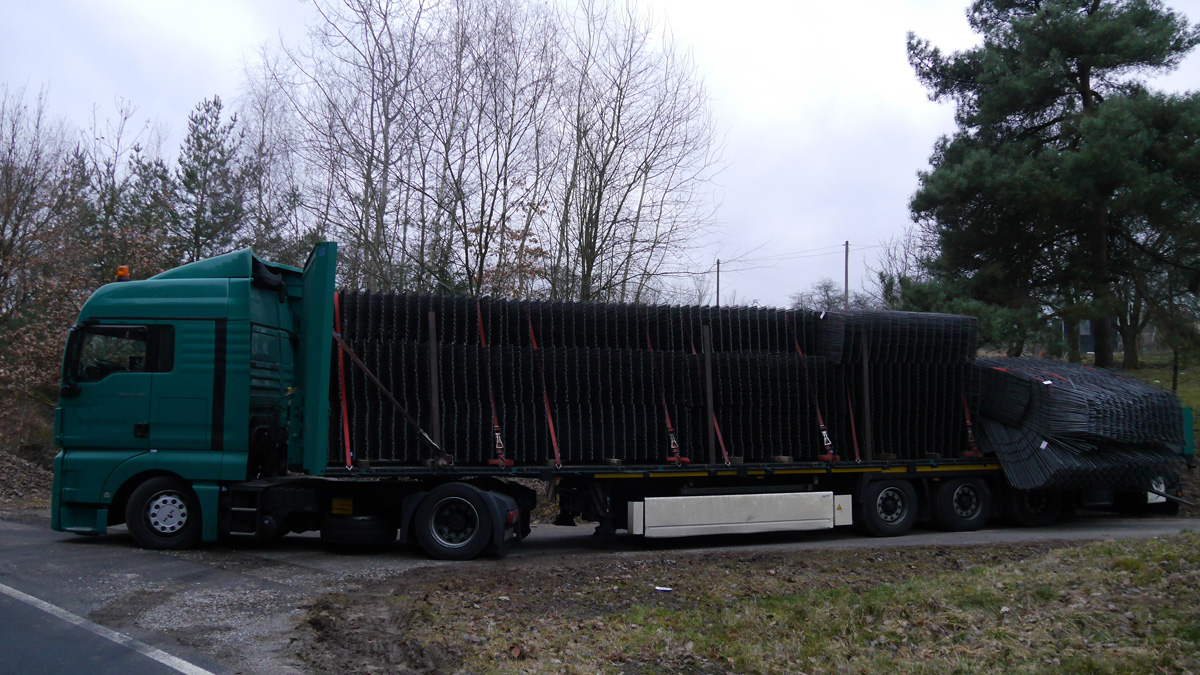 Even though this photo is a little underexposed, it shows very well that the steel mesh has been loaded as a tight-fit, which is something that deserves praise. Although this vehicle is a Code XL vehicle (see Figure 3), the end wall has been additionally relieved using diagonal lashings. Figure 5 shows that separate load securing points have been fitted for this purpose. They are arranged in such a way that the force is transmitted to the vehicle easily and in an ideal direction. In this respect, there is a lot that has been done well.

Since the friction of the steel reinforcement mesh is minimal, but its mass is relatively high, tie-down lashings must be ruled out as a securing method. In fact, there are two reasons why they should be ruled out: Firstly, the structure of the mesh means that it is not possible to establish any significant, permanent pre-tensioning force, and secondly, the poor friction means that at least 80% of the pre-tensioning force would be wasted.

Here, too, only a tight-fit can be recommended as an effective way of securing the load. See the solutions discussed in the Photo of the Month from September 2016 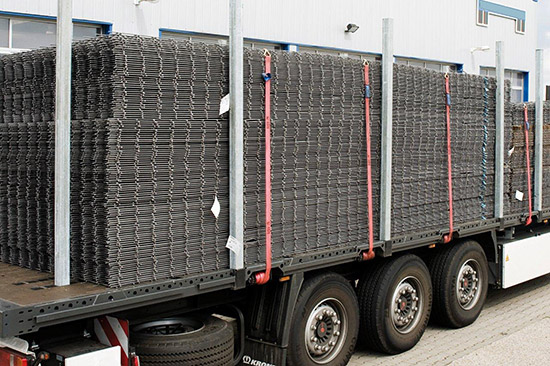 The angle of the tie-down lashings in Figure 5 shows that this steel reinforcement mesh only has cross-members in the middle. Such steel reinforcement mesh must either be turned by 90° when it is loaded, or it must be possible to place the stanchions so far towards the middle of the vehicle that the cross-members of the mesh lie directly against the stanchions.

A further securing method is described in VDI Guideline 2700 Sheet 11.