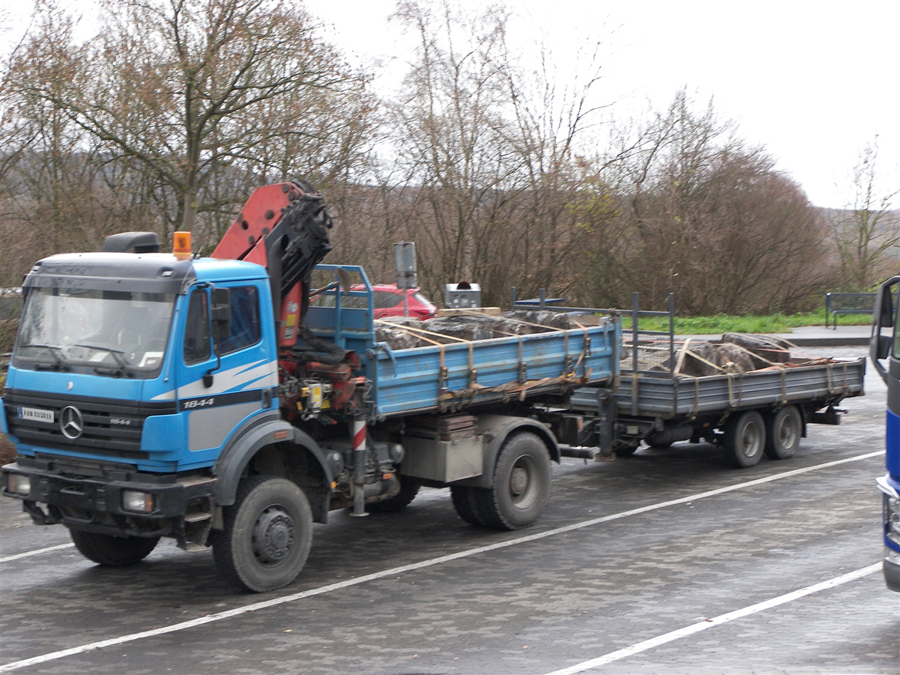 When we see a vehicle where there are a large number of belts running down the outside of the side boards and seeming to be rather flat over the top of the load, it is a safe bet that something special awaits us. And we are not disappointed this time either! 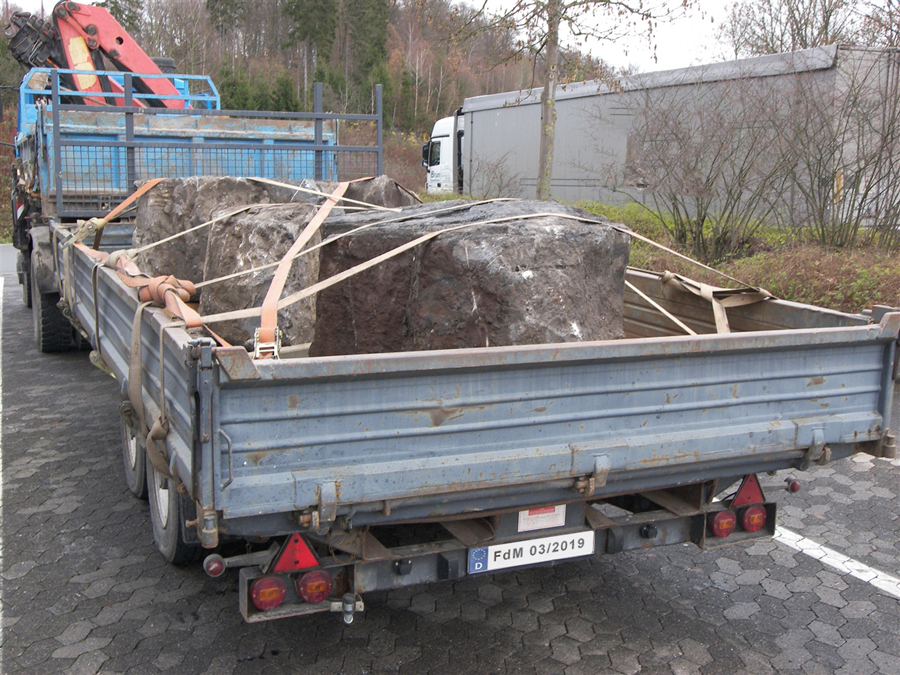 Figure 2 gives a clearer picture of what is being carried here. Large boulders with a few apologetic belts passed over them. The load has been secured with what can only be called tie-down lashings; in this case arranged rather artistically and attached in a number of different ways. Some of the belts are arranged in pairs over the boulders to stop them simply floating off upwards, despite their weight of several tonnes. The angles of the tie-down lashings are so shallow that the securing force they provide, which is extremely poor to start with, is reduced by at least 50 %. The primary effect of most of the tie-down lashings used here is to hold the side boards together. Although it has to be said that the side boards themselves appear to be pretty dependable. One highlight is the belt that runs from the left, rear corner to the front right. We had to think for a while until we worked out what this belt was meant to achieve: One of the unwelcome properties of belts is that they vibrate in the airstream when they are exposed, and will generally make an unpleasant noise as a result. This driver found a way to keep the noise down. To suppress the vibrations, he attached a belt in such a way that it crossed the other belts somewhere near the middle of their exposed areas. 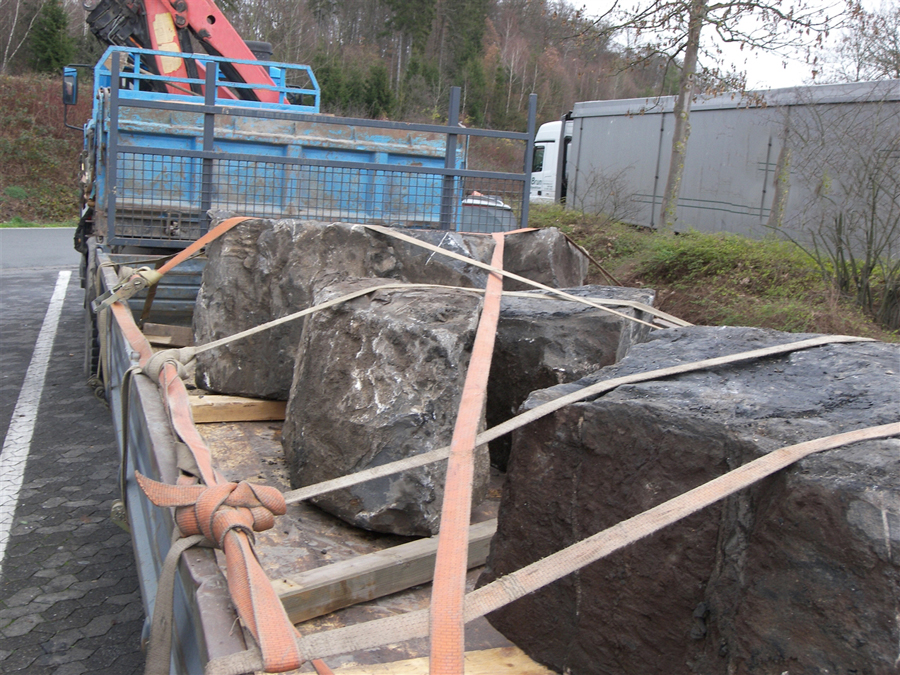 We can only guess whether this diagonal belt provides any additional securing force at the front as a result of the pre-tensioning force that was undoubtedly scrupulously applied. The loose ends of the belts have been elegantly arranged along the side of the vehicle and tidily knotted to the other belts. This means that it is not possible for any of the belts to flap in the wind or even become trapped in the wheels. This makes absolute sense, and deserves praise, even if the resulting arrangement of the securing material reminds one of crochet work. 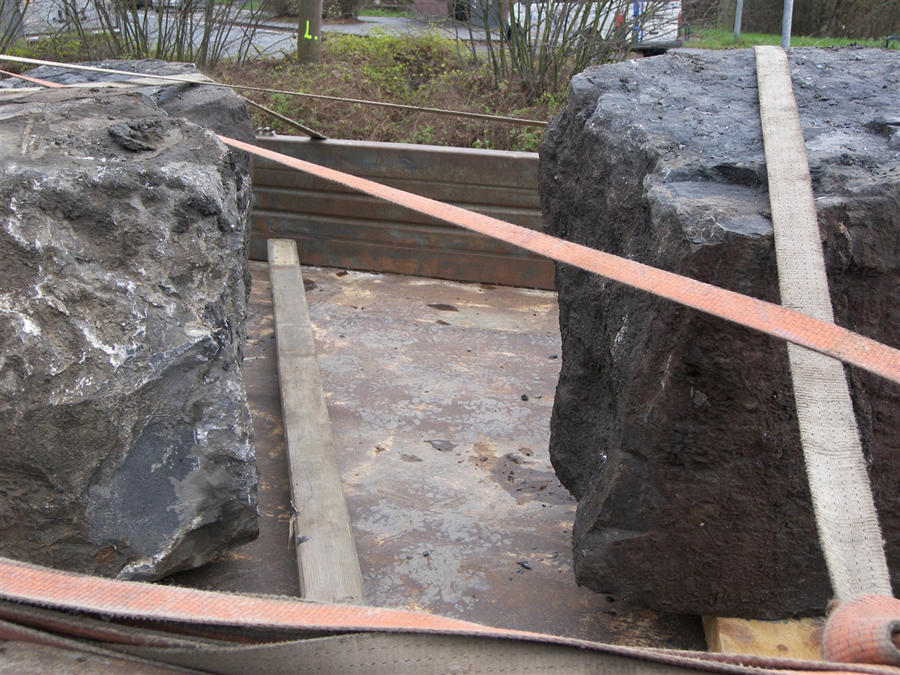 The boulders are surrounded by plenty of fresh air, or, more pertinently, gaps in the load. No attempt was made to achieve a tight fit to the vehicle, perhaps for fear of the vehicle being damaged by the huge boulders. And even the loading bed has been protected from the cargo. Those responsible took the wise precaution of placing two pieces of square lumber under each block. And nobody involved in loading this vehicle seemed to know that these pieces of lumber simply encourage the boulders to roll forwards. 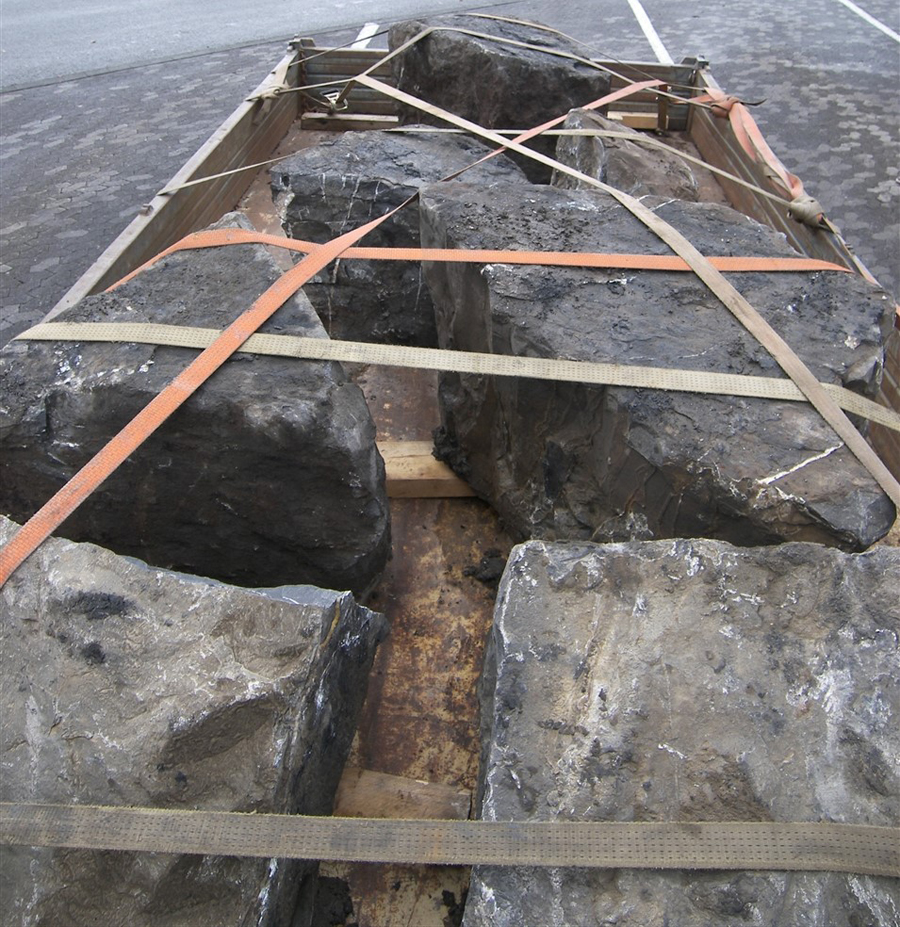 Gaps in the load wherever you look, belts that flap in the wind, but which are arranged in such a way that they provide virtually no securing force, and square dunnage that promotes rolling: It is difficult to imagine anything less professional. 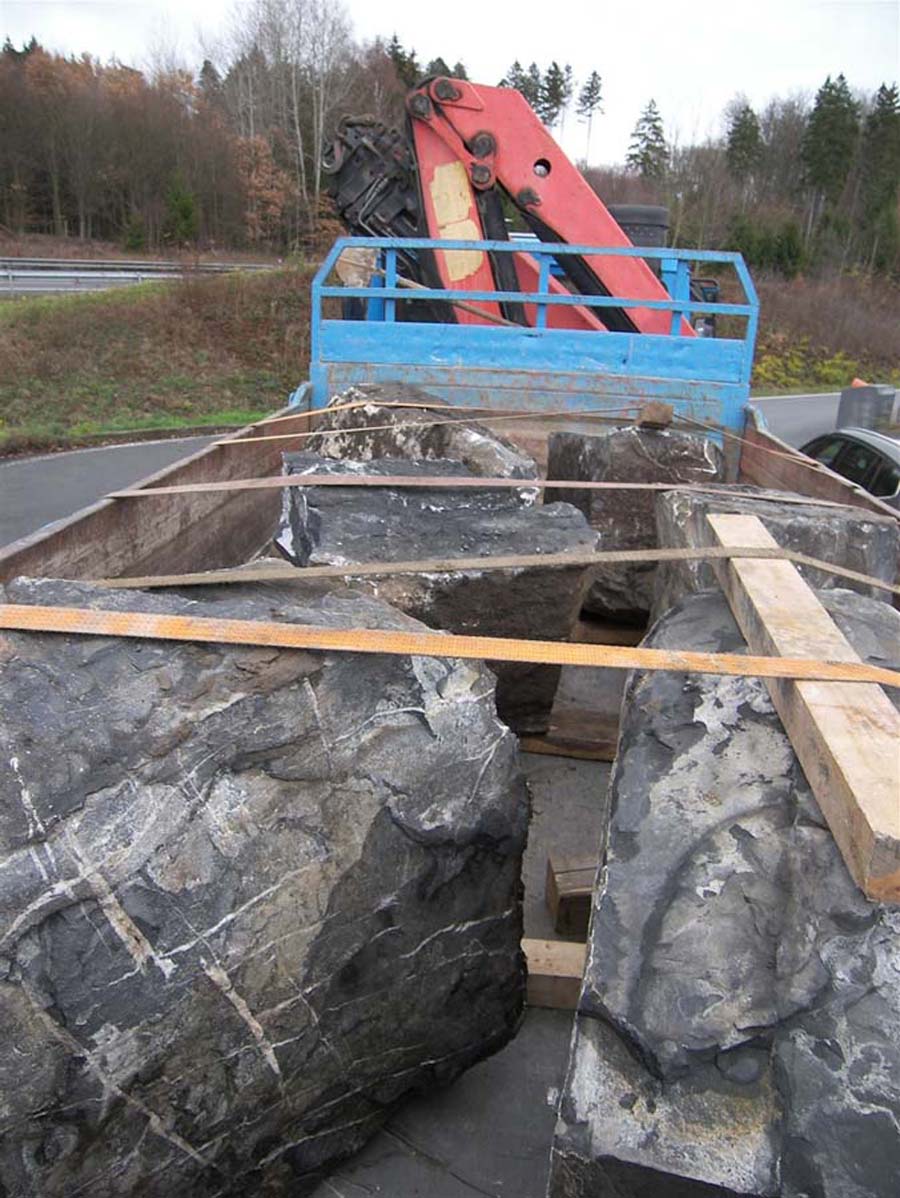 And yet another surprise awaits us if we look at the towing vehicle itself: A piece of squared lumber has been placed on top of each of two of the stone blocks. We cannot work out whether they are there to protect the belts or to marginally improve the dreadful angles of the tie-down lashings.

After so much sarcasm, we of course want to offer a few helpful tips on securing the load.

Let's start with the dunnage:

As always, we recommend rectangular dunnage that cannot roll. And anti-slip mats on top of and under the dunnage make eminent sense. The boulders represent a heavy load, so it is vital to use fully-vulcanized, heavy duty mats.

And how do we actually secure the load?

One thing we did not mention above was that the belts were largely fit for scrapping. So the belts absolutely have to be protected against the abrasive boulders, for example with belt sleeves. The cargo securing industry offers a wide range of useful accessories for this purpose.

It is only possible to secure the load with direct lashings where steps have been taken to ensure that they cannot slip off. Chains are particularly suited to such loads, as they are not as susceptible to damage as belts. Chain slings can be twisted into a figure-of-eight and placed over the boulders. This provides these awkward load units with perfectly usable "load securing points". It is useful to have a second person to hand when securing a load in this way. But that should not be a problem. After all, the loader bears the same responsibility as the driver for load securing and would undoubtedly be happy to help.

Obviously, it makes sense to use a tie-down lashing to ensure that the good level of friction is not impacted by vibrations from the vehicle. But this should be done on a vehicle fitted with load securing points, and not by passing tie-down lashings over the side boards.

If a chain sling is used, and if the load has been placed on anti-slip mats, two direct lashings are enough to secure boulders with a weight of up to 20,000 daN. The prerequisite for this is that the tie-down lashings are able to ensure that the high level of friction is maintained. None of this is rocket science!