Increasingly, we see that loaders and drivers are adopting a particularly cuddly approach to securing loads. In the present case, three structural steel elements had been "secured" on an articulated truck using tie-down lashings. The steel elements were brand new, freshly painted and without any blemishes. Obviously the loader had drummed into the driver that he was not to leave a mark, a scratch or any evidence of the load securing material on the steel elements. As far as we have been able to ascertain, these steel elements were to be used underground in the coal mining industry. This of course means that it was imperative that they should be snow-white and without the slightest scratch. 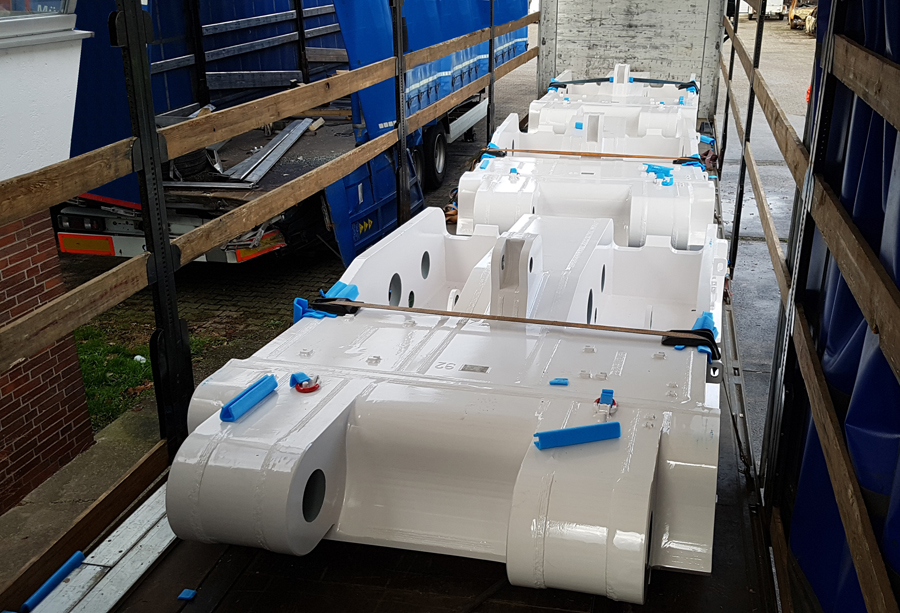 No sooner said than done. Having been thoroughly lectured, the driver secured the load, and wherever there was the remotest possibility that a belt might touch the steel elements, he used blue foam "edge protectors". This is an excellent photo, as the blue of the edge protectors sets off the brilliant white of the steel elements perfectly. As dedicated load securing evangelists, we have to admit to a certain sympathy, because all the belts already look as if they have been well used. 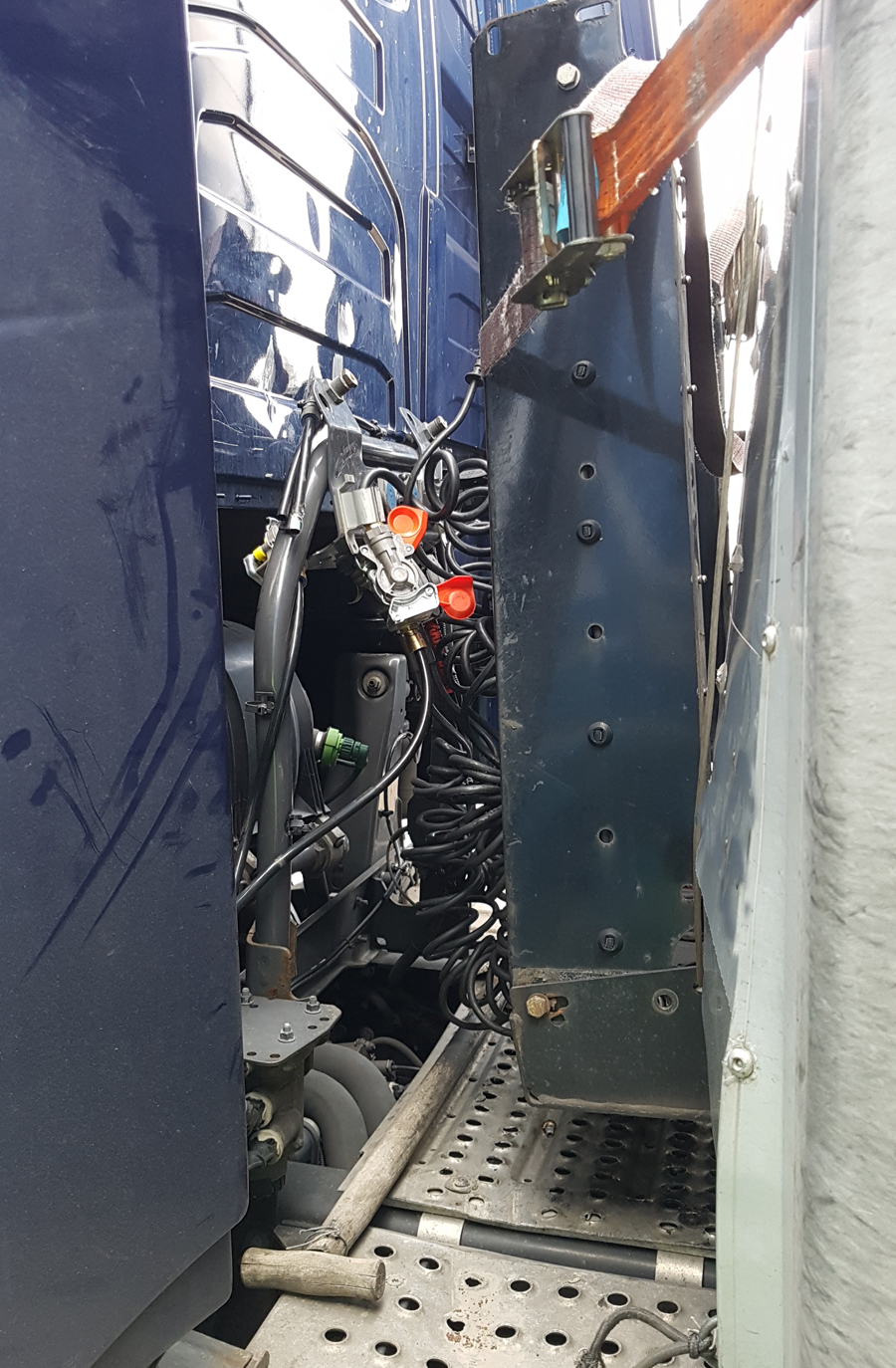 Figure 2 shows the end wall of the vehicle involved in the accident. The end wall supports have been bent forward and torn out from the actual end wall. The vehicle had braked on a motorway exit at a probable speed of around 20 or 30 km/h. This vehicle must have braked quite sharply, although we do not know the reason it had to brake. The load, comprising the three 6.5-tonne steel elements already described, slipped forward in unison. Each of the steel components slipped by about 1 m or perhaps a little more. The end wall courageously stood up to the frontmost steel element, which did not do it a great deal of good. As we have described, it suffered a huge dent. Which left the end wall supports bent forward in the direction of travel. After the driver had taken a look at the slipped load, he decided to take it on to the customer, as it was not much further to travel. Unfortunately this plan failed: The bent end wall supports had cut through the compressed air line to the trailer, thus putting an end to the journey, as the brakes on the trailer were fully engaged. 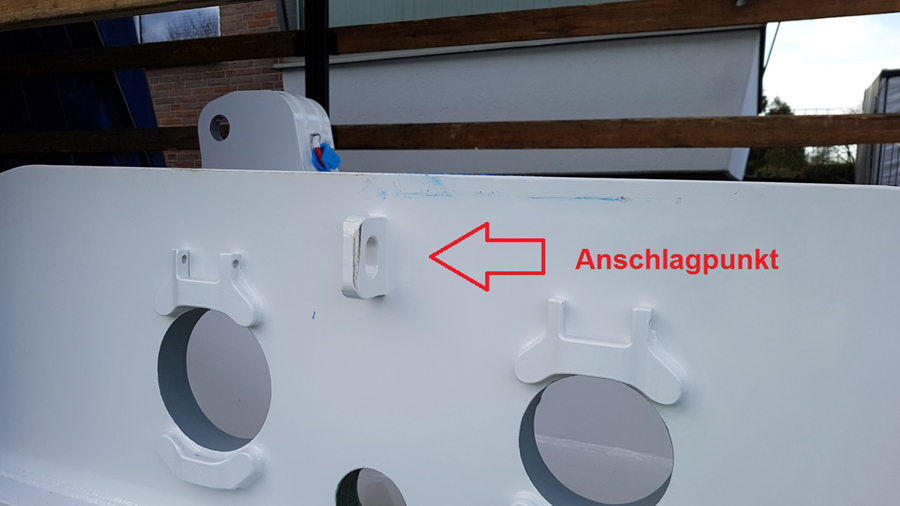 As we have said, all three steel components had slipped forward. Only the first element made contact with the end wall. The other elements did not come into contact with each other. Figure 3 shows a rather long "skid mark". Along the first half, it is still blue (from the cuddly foam). After that, there are only slight color marks on the steel component. On the edge of the component right above the right-hand hole in Figure 3, you can see two prominent spots where the paintwork has been damaged. This was probably the point at which the black edge protector was suddenly subjected to a high load during braking. As it slipped, the belt had to slide over the marked lashing point. You can see clear signs of abrasion on one side. As the belt slipped over the lashing point, it was lifted slightly and the edge protector was swept off. And the blue foam was also swept off with the edge protector. The belt continued to slip backwards and stopped abruptly at the large steel lug at the top. At that point, this belt failed, as did all the 6 belts that were used as tie-down lashings over these steel elements. The tie-down lashings shown in the photos were attached after the accident in order to be able to drive the last few kilometers to the customer. 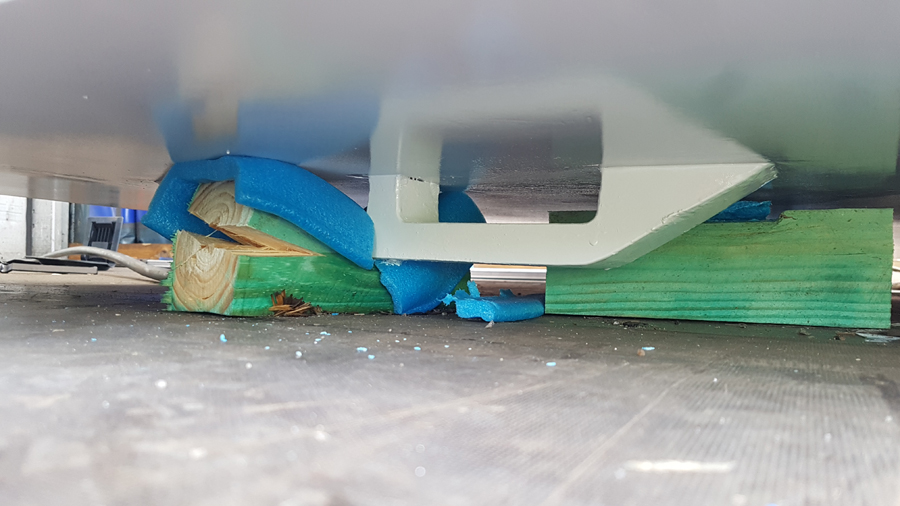 It is amazing how meticulously all the points of contact of these heavy, smart white, steel components have been protected. The load was placed on the trailer as if snuggled into a blanket. Anyone familiar with our "love" of square dunnage will already be waiting for our highly critical comments in this respect. We don't want to disappoint these readers, but would ask for a little patience. 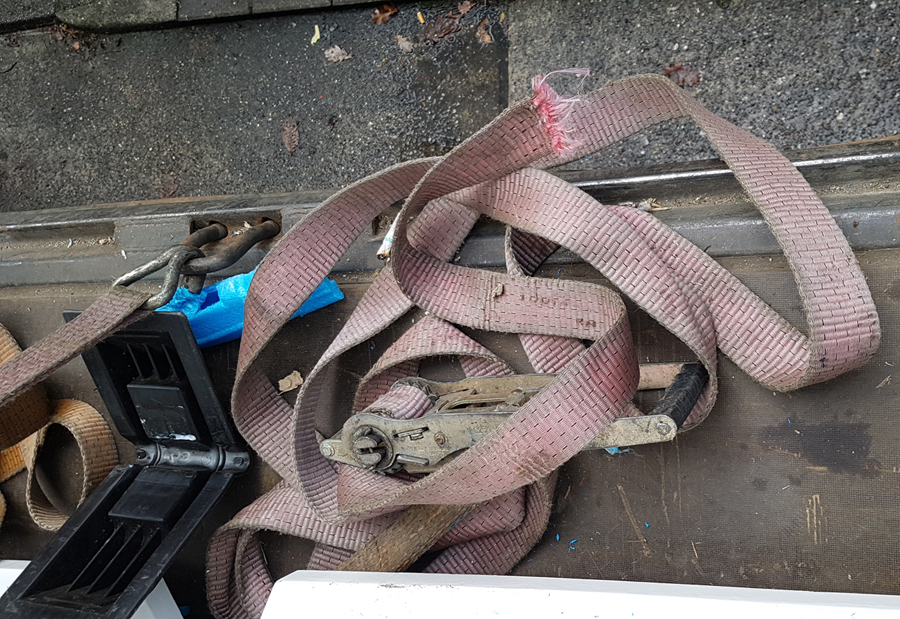 It is easy to see that the belts have been cut through violently. Admittedly, they were no longer in the very best condition and in some places already show signs of wear that would justify their being scrapped. But since all these belts were used as tie-down lashings, not even the strongest and newest could have withstood the loads we are about to describe. 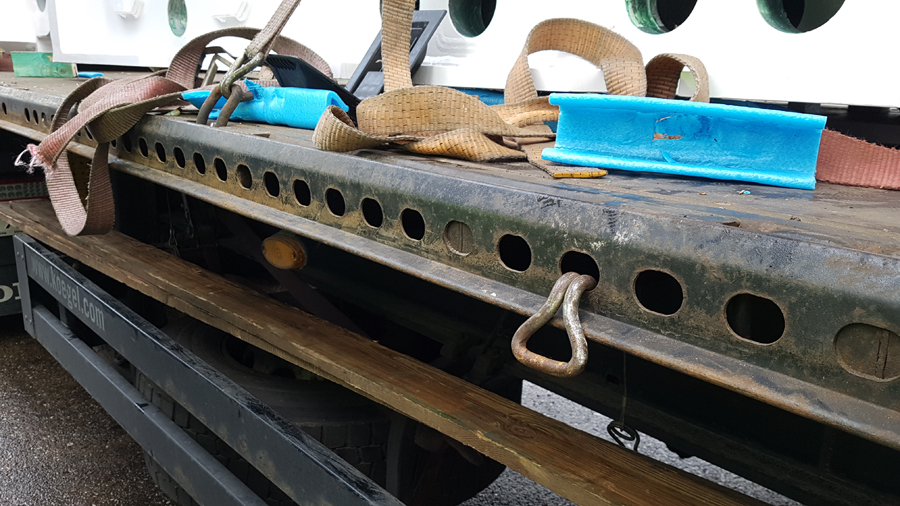 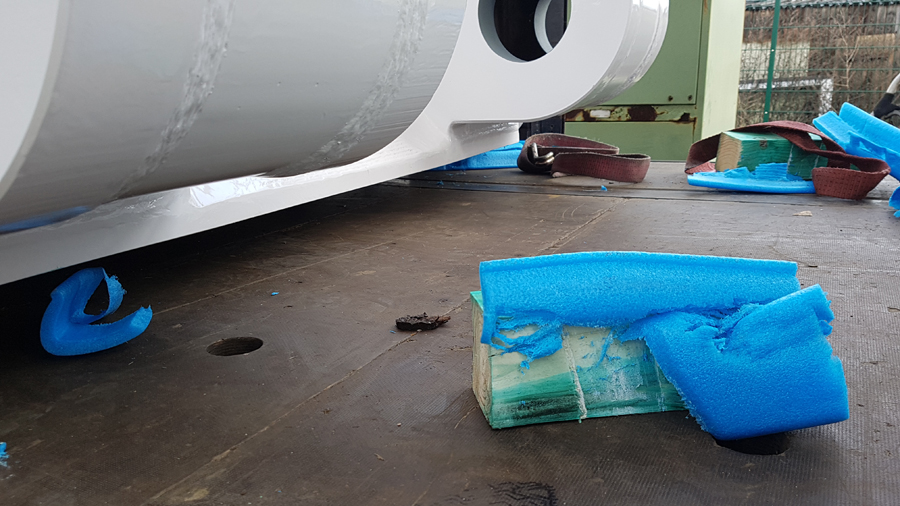 As far as we are concerned, Figure 7 illustrates the miserable extent of this load-securing disaster. The load simply slipped or rolled for a good meter; the square wooden dunnage happily provided a rolling undercarriage, and, as was to be expected, the cuddly foam just disintegrated. In places, it melted due to friction and elsewhere it was crushed or simply ripped off. The belts all slipped along until they failed or were ripped when they encountered an obstacle. It is hard to imagine a more nonsensical way of securing a load.

He will still have to inform his employer that his vehicle is in need of significant repair and that the load has not arrived unscathed at the customer's – despite its snug bed of blue foam.

First of all we would increase the friction. Because of the relatively high weight of the load, we would use fully vulcanized heavy-duty mats. We would, of course, replace the square dunnage with rectangular cross-section dunnage. If the height provided by this square dunnage (approx. 10 cm) is absolutely required, it is still possible to bolt together 2 pieces of the square dunnage, which would effectively prevent rolling. Of course, the anti-slip material must also be laid on top of the rectangular lumber.

If all the steel elements are now resting on anti-slip material, a securing force to the front of 1300 daN is still needed for each steel element. Friction would be sufficient for securing to the sides, provided that at least 2 tie-down lashings are used to ensure that the good level of friction is maintained at all times. To provide adequate securing to the front, the large holes at the rear of the steel elements offer an excellent way of attaching direct lashings. It goes without saying that the belts must be protected from the sharp edges of the steel elements. Options include belt sleeves, polyurethane rails into which the belts can be inserted and other good ideas that the load securing industry has come up with for such cases.

If it is indeed the case that all the steel elements need to arrive at the customer in perfect condition, things can get a little more difficult. We are not aware of any colorless anti-slip materials. Since direct lashings can only take effect when the load slips a little, there is of course a risk of slight discoloration. But this would only happen in the event of a relatively high acceleration due to braking (> 0.6g because of the good friction). If the belts and belt protectors are not to come into direct contact with the load, we have seen solutions that make use of carpet offcuts. However, such solutions should only be used where good friction is not important, i.e. only at the points at which direct lashings pass over the edges of the load.

Back to beginning | Link to "Motorway parking facilities: An ideal spot for criminals"