Securing loads against criminals – Motorway parking facilities: An ideal spot for criminals
or how to make millions just with some nail scissors. 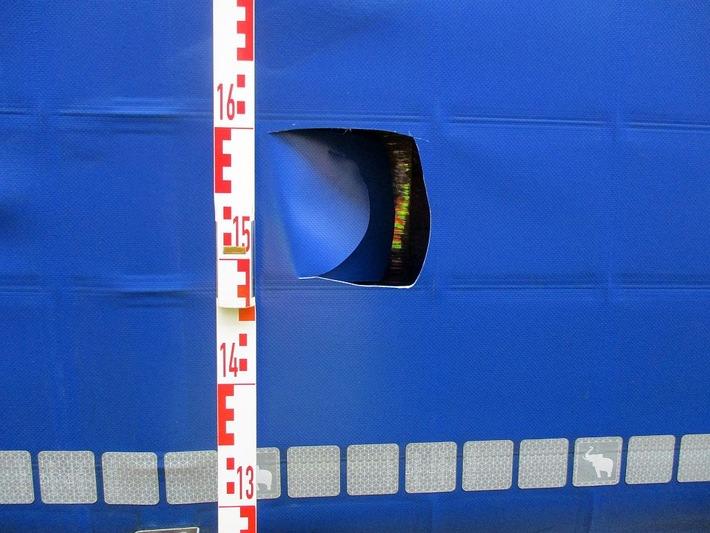 Regular readers of our column will be asking themselves what we are thinking of. But we can put your minds at rest. There is nothing wrong with us; it is just that we want to talk about load securing from an entirely different perspective today. And so, alongside our normal load securing column, we have today written a second column about securing loads against theft.

In this column we are looking at loads that have only metaphorically "fallen off the back of a truck". This term for goods that are stolen during transport trivializes a serious issue and says a lot about the attitudes to property, at least on the roads. Goods that are being transported clearly seem to be fair game and a criminal attack appears to be regarded as little more than a harmless offense. But the total annual loss in the EU amounts to 8.2 billion euros. This is where things stop being amusing.

The magnitude of this loss seems astonishing, but if you take a walk around a motorway truck stop and look at the tarpaulins of the trucks or their trailers, it almost seems to be the done thing to have between 5 and 15, mostly crescent-shaped, incisions on each side of the tarpaulin. They are usually well repaired, provided that the tarpaulin slitters have not struck the previous night, but it nevertheless annoys the carrier for 2 reasons:

1. If cargo has been stolen, it will cause problems with the customer and the insurance company and

2. the tarpaulin is damaged and, if it could still be used to help secure the load until recently, it will no longer be as strong as it was once it has been repaired This can lead to long and unpleasant discussions with the police, who really only wanted to check that the load is secured properly. What is particularly annoying is that this negative impact can still cause trouble long after the actual loss from the theft has been settled.

So what is going on?

We are talking about the organized theft of cargo, mostly on motorways. It's a bit like kids stealing apples, or "scrumping" as they say in the UK. One person is on the lookout while the other checks that the apples are ripe. And if they are tasty, the whole gang will come and fill their trouser and jacket pockets. And this is pretty much the same as what happens with organized crime. Someone keeps lookout, not at the corner of the orchard but at the previous parking bay; scouts check the trailers by nimbly slitting these crescent-shaped holes in the tarpaulin to see whether the cargo is worth stealing. If a look into the interior reveals rich pickings, a van arrives with reinforcements, the interior is cleared of its valuable load within minutes, and the perpetrators then disappear as quickly and as noiselessly as possible. Our motorways offer endless possibilities for such activities: There is plenty of cargo and the motorway is the perfect escape route. The risk is small, after all, someone is keeping lookout, so only a plain-clothes patrol would be able to detect the break-in. But because the action is conducted swiftly and precisely, this risk is somewhat theoretical. 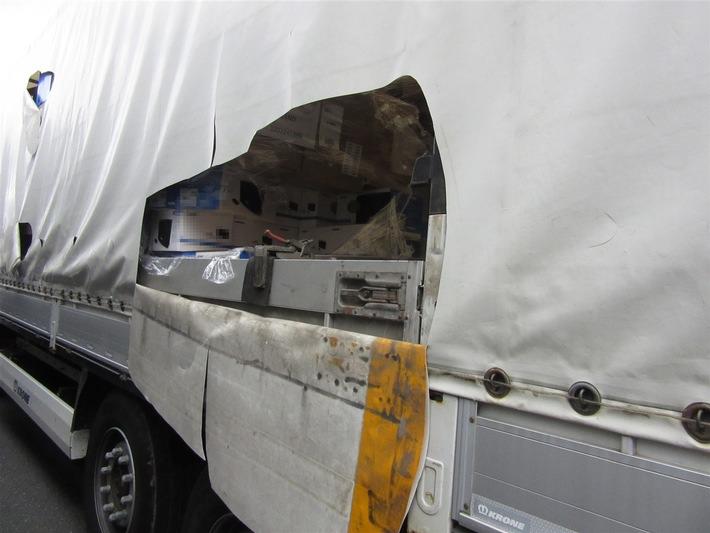 A total of 7 truck tarpaulins were slit open at a truck stop. There were the typical small holes to see if a break-in was worthwhile and a few bigger holes to actually steal the cargo. A knife is used to cut a sizable opening in the tarpaulin and then "drop" the cargo from the truck – in this case, consumer electronics to a value of 17,000 euros. This is a quick and "efficient" operation and 17,000 euros have simply changed hands in the shape of 45 packages. 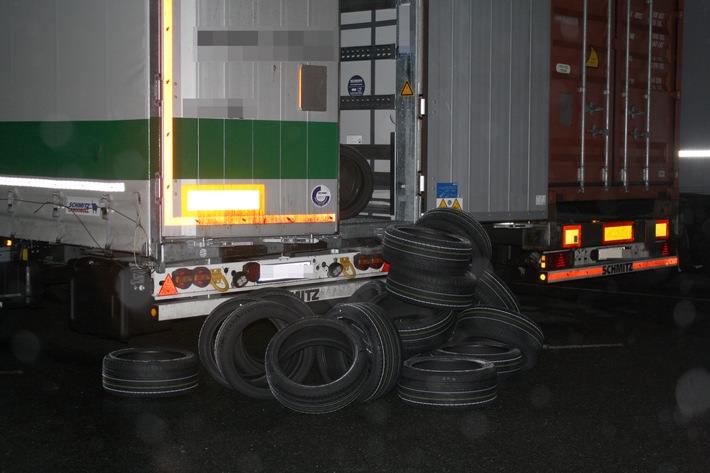 It is not as though the tarpaulin slitters are not able to think and act creatively. On the contrary, a raid like this is viewed as a complex supply operation. So, for instance, they are also interested in car tires, because these also need replacing. In this case, 20 car tires were stolen. Clearly, the vehicle intended to take away the loot was too small, so the loss was limited. Sometimes logistics prove to be a problem after all. 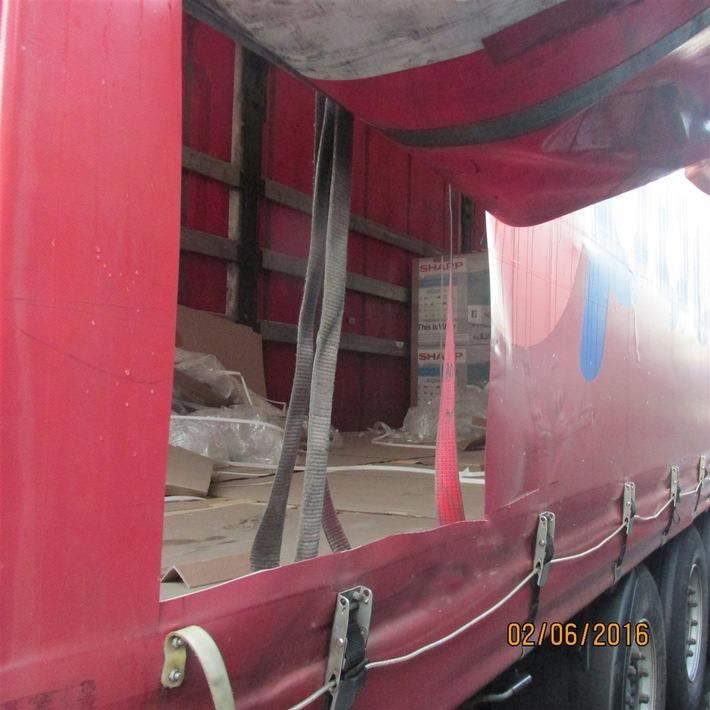 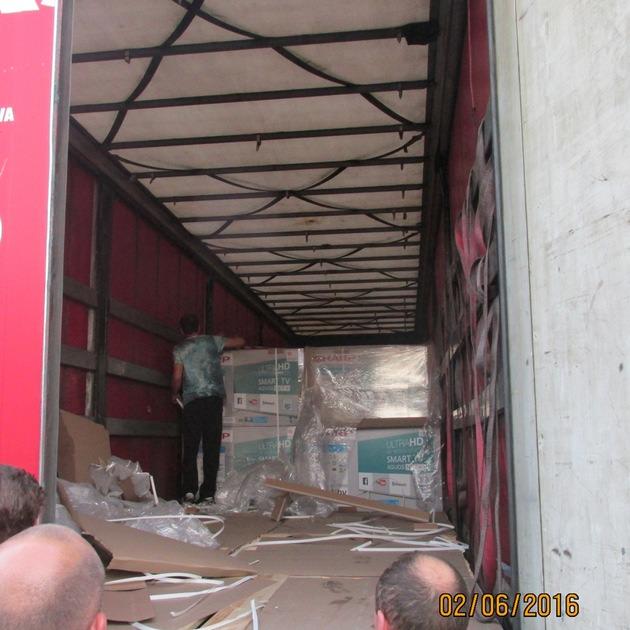 In this case, the damage amounted to a quarter of a million euros, because it was 10 pallets of LED flat-screen TVs that were simply stolen. The pattern was the same, small holes, a small torch and the labels on the boxes immediately revealed that it was worth it. No sooner said than done: The accomplices were simply called up by mobile phone, an impressive hole was cut into the tarpaulin with a nice sharp knife and many hands made light work of the job of unloading. 120 televisions changed hands in the middle of the night without the driver even noticing. And even if he had noticed something, he would have been well advised to stay in his cab rather than to trust in the peace-loving nature of these organized criminals and expect that they would run for the hills just because they saw the driver. 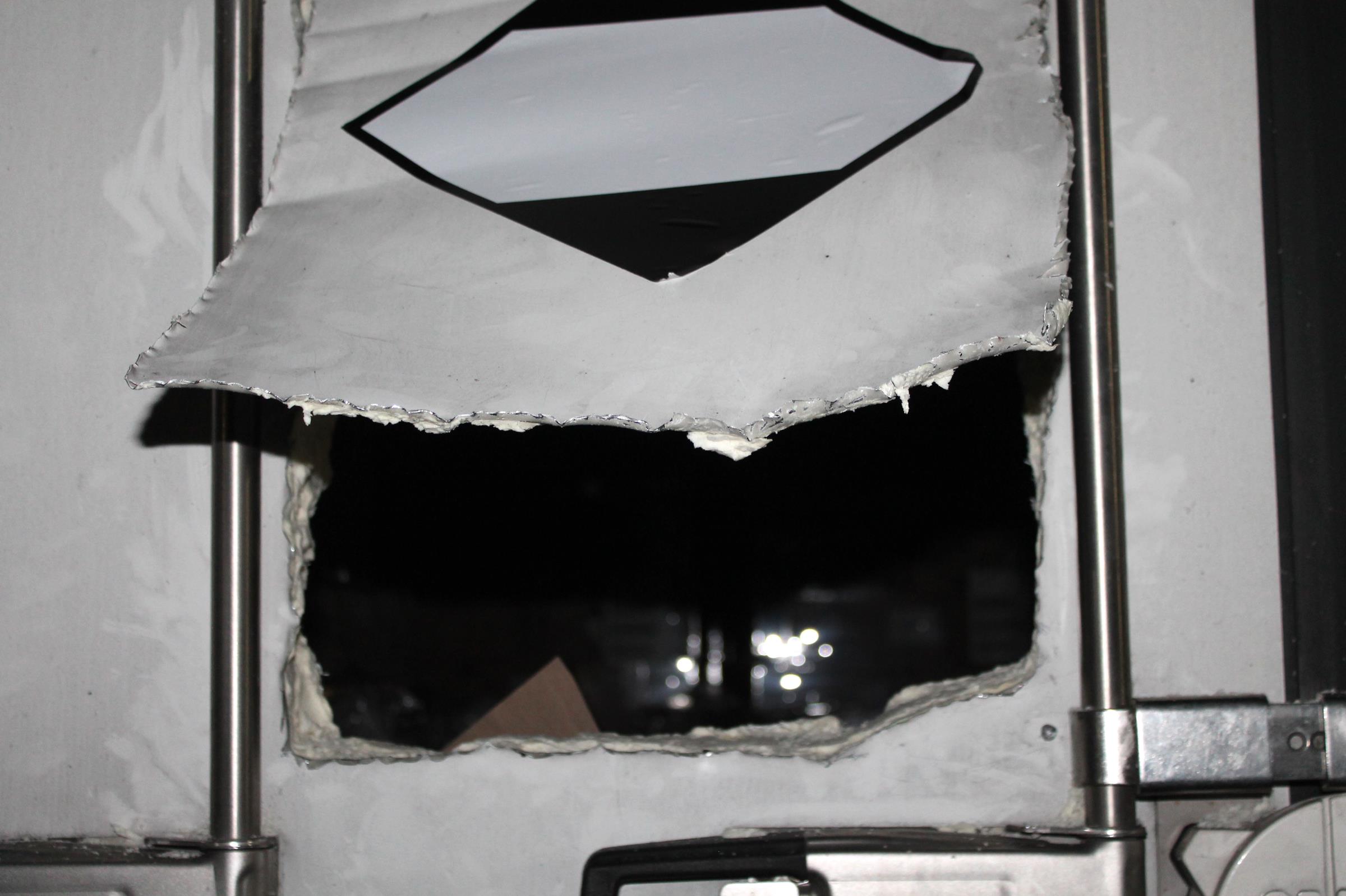 But it's not as if the criminal gentlemen are afraid of honest work. No, they don't just take their knives and slit tarpaulins for the fun of it. They are also undaunted by the hard work of laboriously opening up what appears to be a refrigerated truck with a metal body. But their hard graft was amply rewarded, because 20,160 bottles of a men's perfume fell off the back of this truck. Nothing is known about the value in this case, but since perfume is generally not one of the cheapest products you might pick up in a drugstore, the bill would be something in the region of 200,000 euros at 10 euros per bottle or 400,000 euros at 20 euros, … At the headquarters of this motorway mafia, they would have put a big red cross in the calendar for this night's work, as it seems to have been lucrative.

It takes some considerable audacity to open up a refrigerated vehicle and steal 12 pallets of men's perfume as cool as you like. 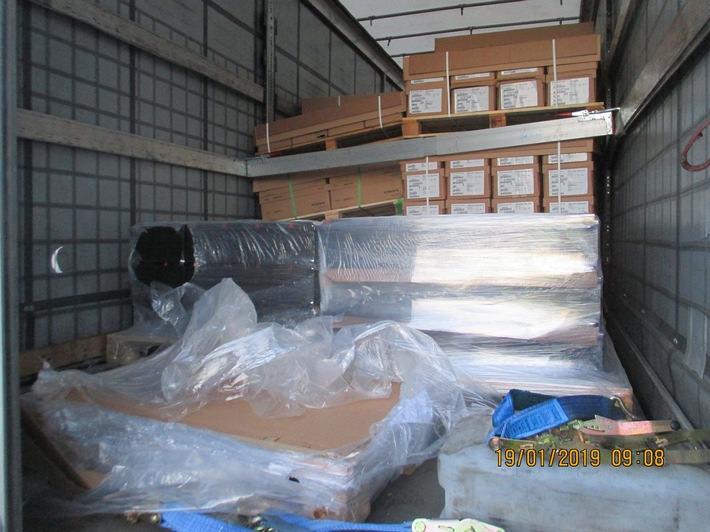 This picture shows, as so often, an empty pallet. Originally, it was being used to transport 36 high-quality car batteries. But as we have already mentioned, our friends from the world of organized crime take a holistic approach: As well as tires, they also think about a new battery. Even in this case, the loss was 5,000 euros, and, as in thousands of other cases, the tarpaulin had to be repaired. 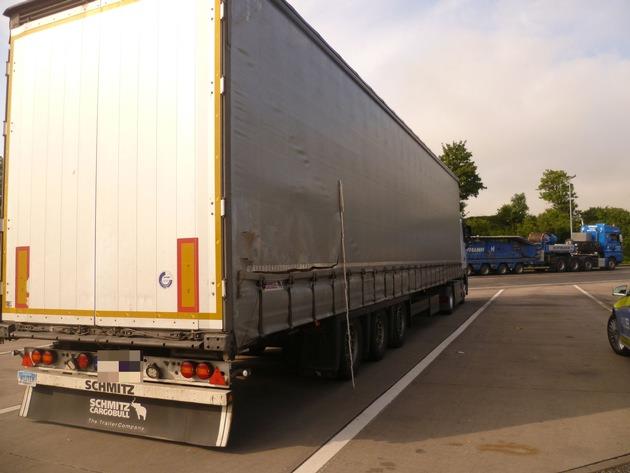 A folding rule is still leaning against this trailer, which would suggest that something is amiss. And indeed, if we take a closer look at the picture, we see a sizable hole in the tarpaulin. The hole was presumably of such a generous size because the Amalgamated Union of Rogues and Assorted Villains insists on safety at work. Crime scenes have to be made easily accessible to allow the stolen goods to be removed safely, quickly and without damage. 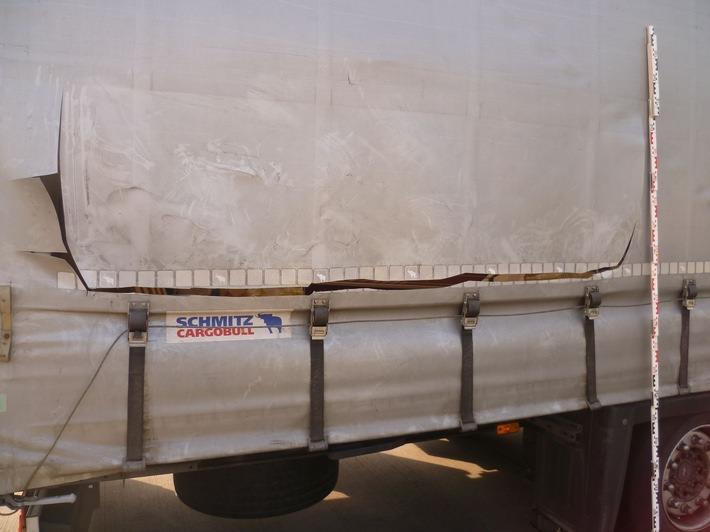 This picture clearly shows the hole in the tarpaulin, which was cut relatively large for reasons of safety at work. After all, the goods stolen were 30 70-inch flat-screen TVs worth a tidy 54,000 euros. The damage to the vehicle was estimated at a good 1,000 euros and the only trace of our friends the tarpaulin slitters was the slits they left behind.

Last but not least, a little hole. If anyone is thinking that we will end on a conciliatory note and show a hole in a tarpaulin that does not represent such great damage to our economy, they are mistaken. This hole stands for the following report:

On Saturday night, Sunday morning, unknown persons attacked a total of 35 trucks at four truckstops along the A4 motorway between Eisenach and Erfurt. Goods were stolen from five of the trucks. At one service area, 24 trucks were attacked, i.e. tarpaulins were slit open but nothing was stolen. Probably, they were not carrying the right cargo. But not only does the tarpaulin have to be repaired; the truck also has to go to the workshop, which costs time and money. The driver and the vehicle are unavailable for that period, which again costs time, money and trouble with the customers. But it doesn't end there. In the same night, 3 trucks were attacked on the Hörselgau truck stop on the way to Frankfurt am Main. In this case, one truck lost a small pack of batteries and 4 bottles of wine were taken from another truck. This is typical of the approach "let's have a look and see what we can see". The material damage in this night amounted to 6,500 euros and the stolen goods came in at 15,000 euros. Any collateral damage that might be caused by the holes in the tarpaulins is not even recorded. (See press release from 5 November 2018)

Because the risk of detection during such thefts is less than one in a thousand, there is little deterrent for anyone wishing to commit such a crime. At least that was so in the past. But now the police have begun to focus on the tarpaulin slitters and have already scored some significant successes. And the carriers are also beginning to equip themselves. Many a knife will be blunted in the future, because tarpaulins are being reinforced, making them more resistant to cutting. And electronic capabilities are also becoming more widespread, detecting raids and sounding the alarm. They can even detect if someone approaches a vehicle and an alarm can be triggered. If there is also a timely intervention, for instance by the police, then the tide will turn. We are declaring war on the tarpaulin slitters and welcome any tips and assistance so that the goods arrive at the right destination and we can stop financing the rogues with our purchases.

Back to beginning | Link to "Cuddly load securing methods"