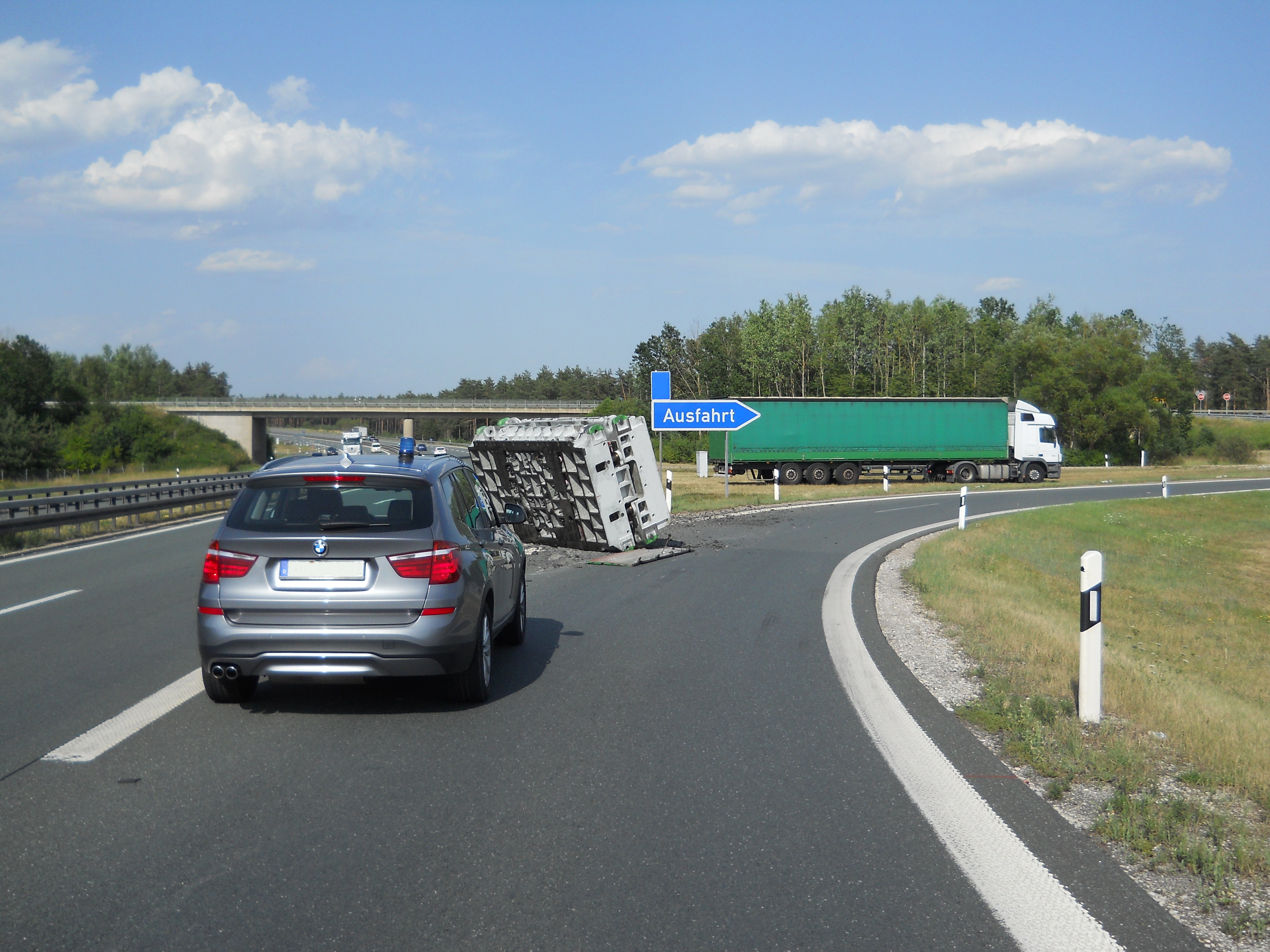 24.5 tonnes of steel are lying on a motorway slip road. It is a sheet metal press. It is fortunate that the machine didn't start pressing sheet metal here. Instead, it only damaged the asphalt, leaving two deep gouges in the road surface. 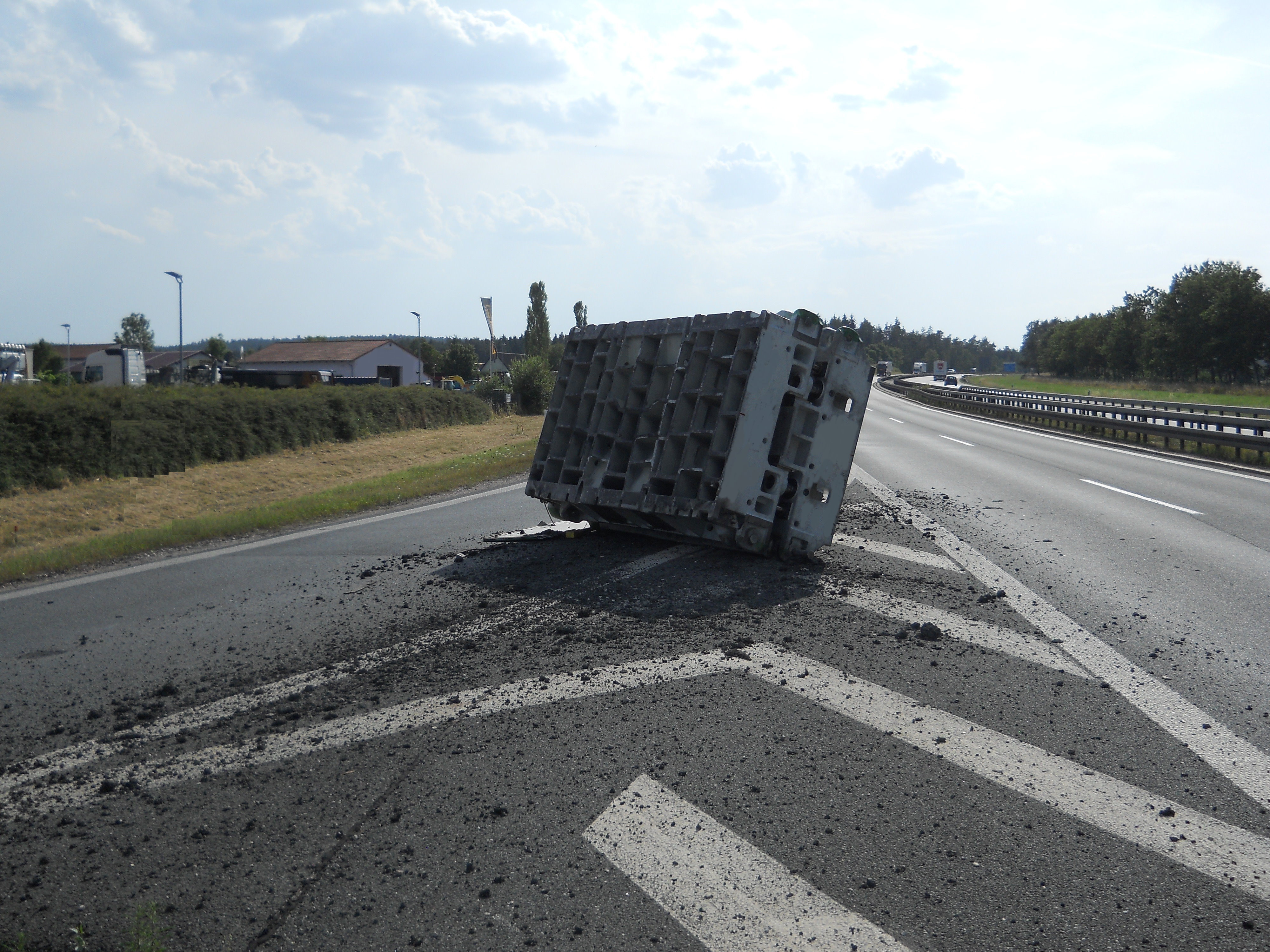 The photo in Figure 2 clearly indicates the force with which the machine hit the road, as the bits of asphalt are spread across a large area. And in Figure 3, we can clearly see the deep gouges in the road surface. 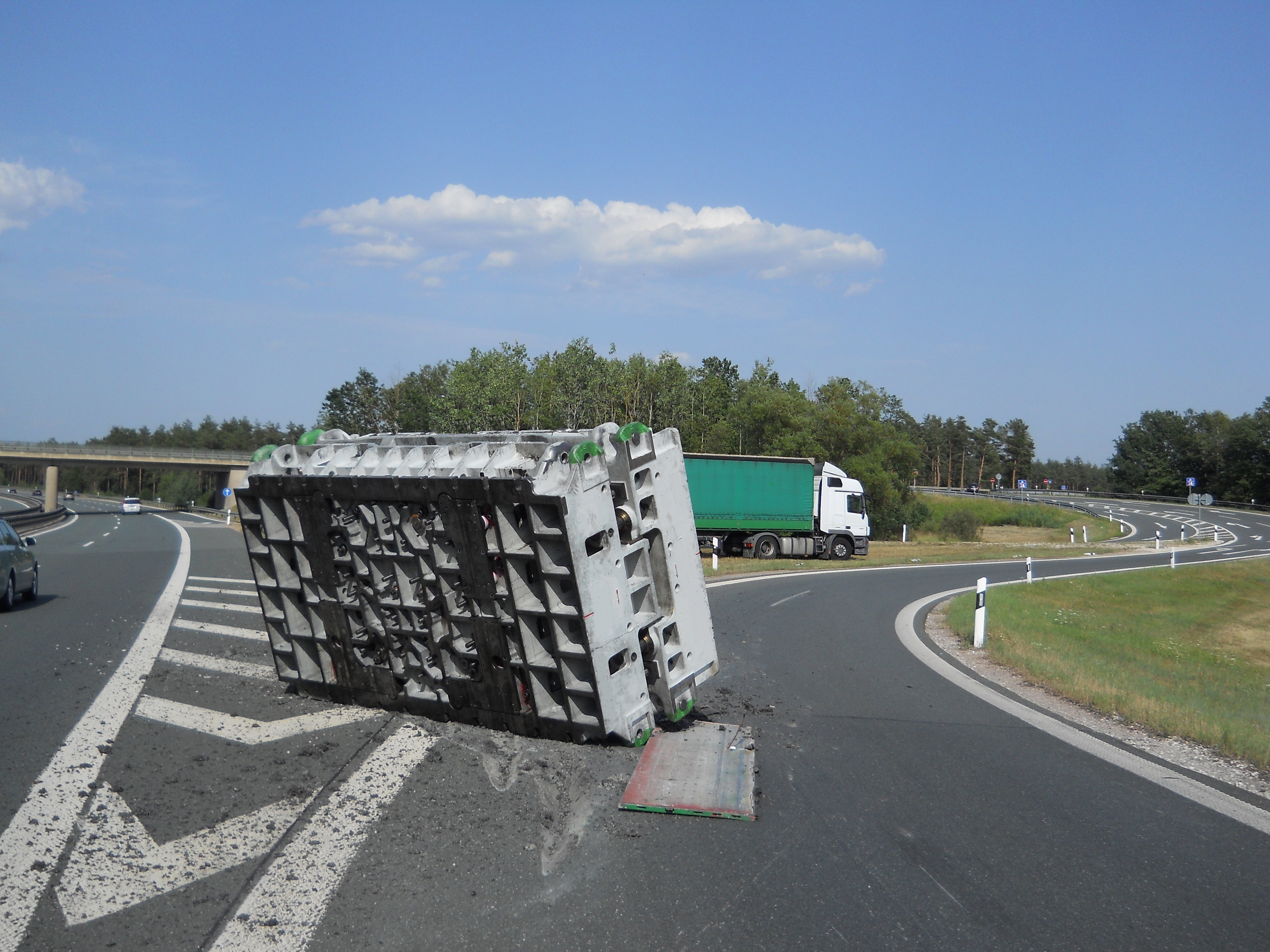 So what happened? It is obvious that the load was poorly secured. According to the police who recorded the accident, the truck drove onto the slip road at around 50 kph. And the load continued to travel or slip in a more or less straight line.

And luck had a hand in events: After all, there was no car under the press. The surface of the road has been damaged, but that is quickly repaired. The press will be a write-off, which means that an insurer will have to pay out several hundreds of thousands of euros. And if this loss also leads to an interruption to a company's business, that can be very costly indeed. Just to be clear what we are talking about here, an interruption to business operations (consequential damage) could mean a car factory coming to a standstill as a result of pressed steel parts being unavailable. A daily loss of around € 150,000. It could take one or two months before another press like this could be procured (if everything goes smoothly). At 22 working days per month over two months, the loss quickly mounts up to some 6.6 million euros. 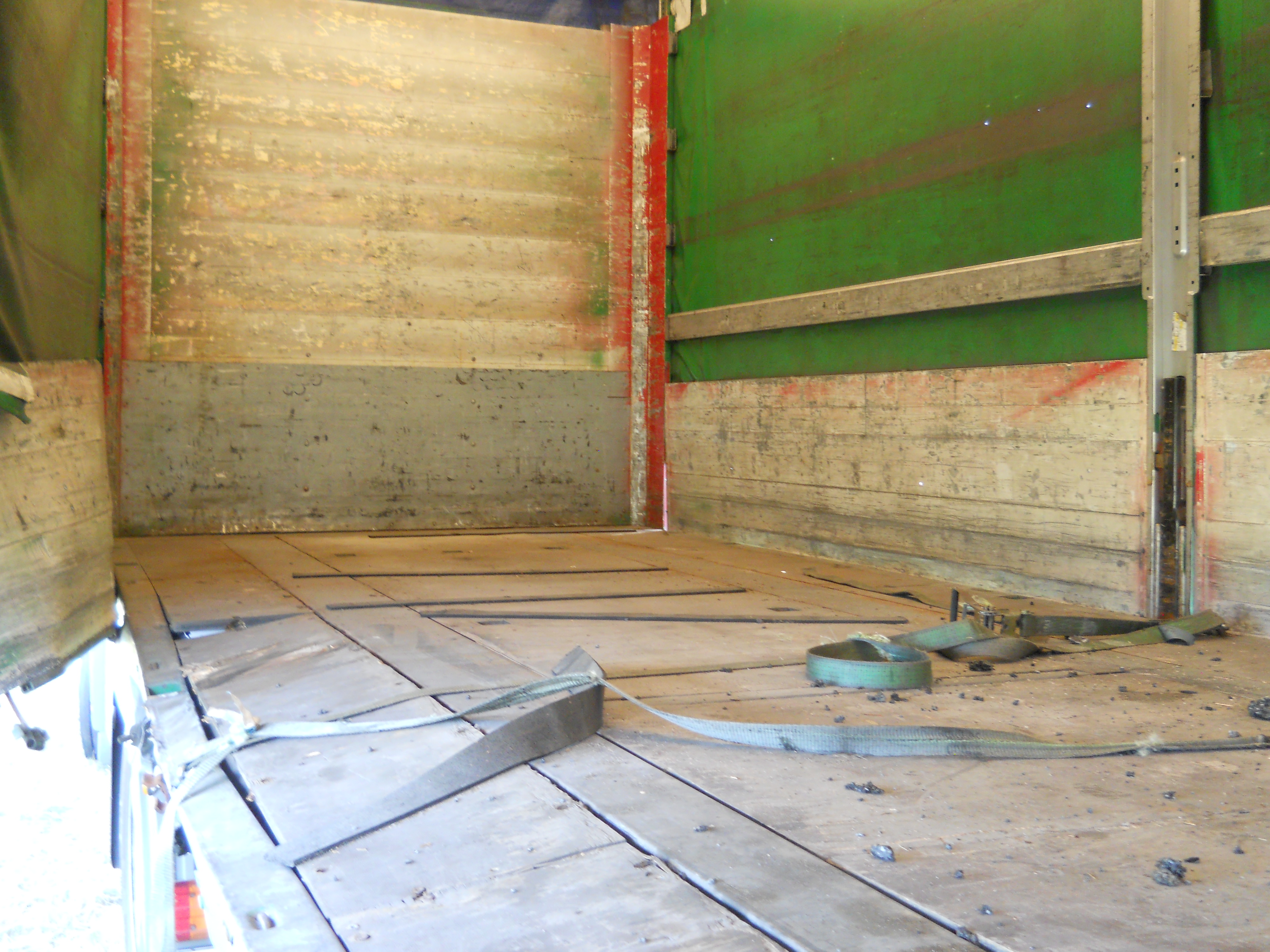 The press was "secured" with 4 tie-down lashings and anti-slip mats. To put it mildly, any attempt to secure a load weighing as much as this one with tie-down lashings does not make a great deal of financial sense – if it can be done at all. So why did the press slip off the side of the loading bed with such gusto, despite the use of anti-slip mats?

What we offer in this column very often amounts to supposition. We put together a coherent explanation for what we see in the pictures and the information we have available. From Figure 5, we glean that there is stone debris (clinker or something similar) on the loading surface alongside a number of the anti-slip mats. This leads us to surmise that the anti-slip mats were not able to do the job they were intended to do. The loading surface had not been swept clean, and so we can only assume a maximum coefficient of friction μ of 0.2. This allowed the press to slip up to the side gates with such force that it broke through them and fell onto the road. 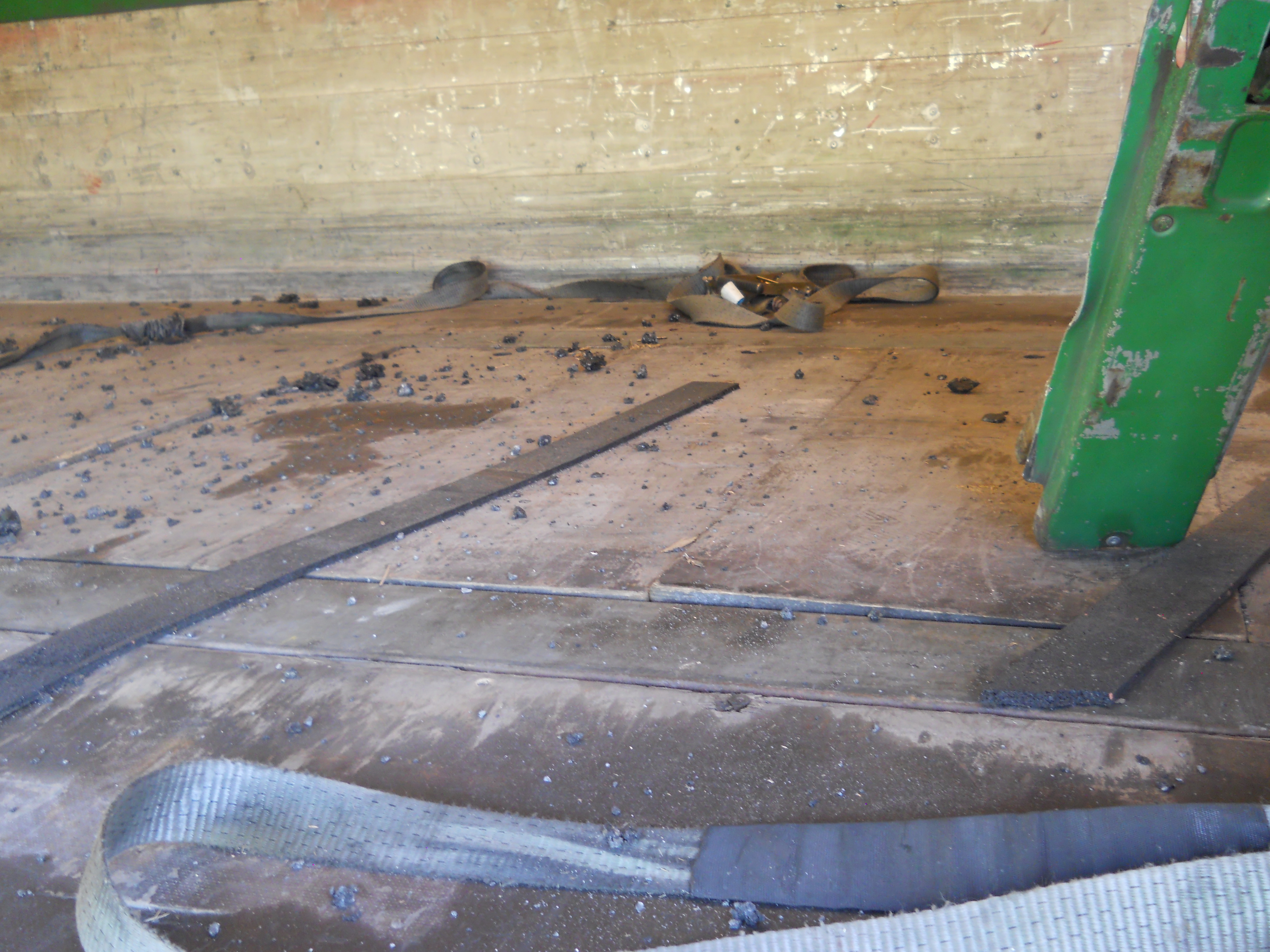 In principle, 100 % of the force needed to secure the load to the side can be achieved by increasing the level of friction. The minimum level of securing required to achieve this had been provided in the form of tie-down lashings. The logical conclusion on looking at the photo is that, as a result of the dirty loading surface, the press was not adequately isolated from the loading bed in terms of friction. 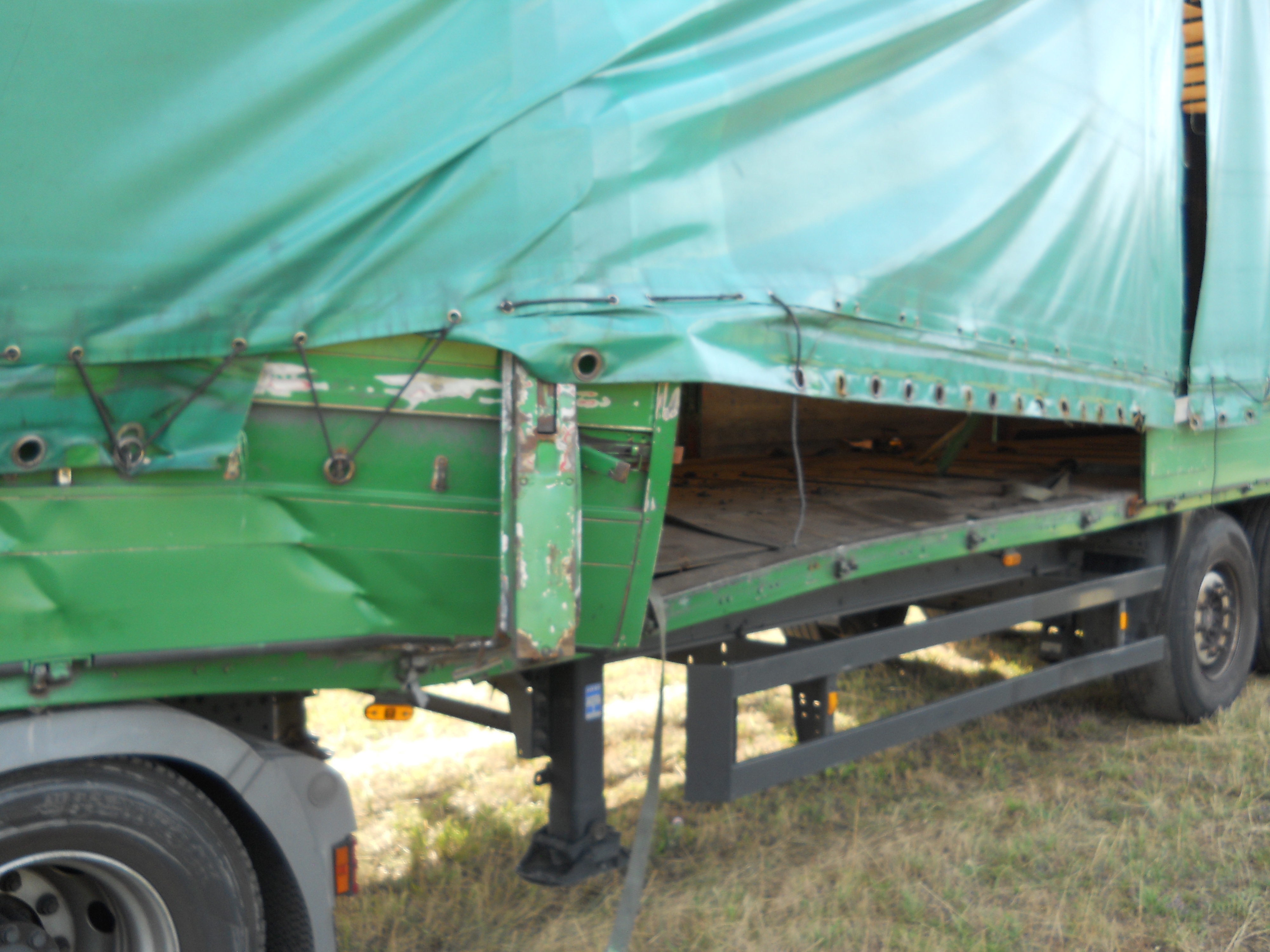 Figure 4 shows that the press slipped to the side at an angle of almost 90°. When a weight of this magnitude starts moving, the kinetic energy generated is so high that neither a side gate nor collapsible stanchions (Figure 6) can offer any significant resistance. 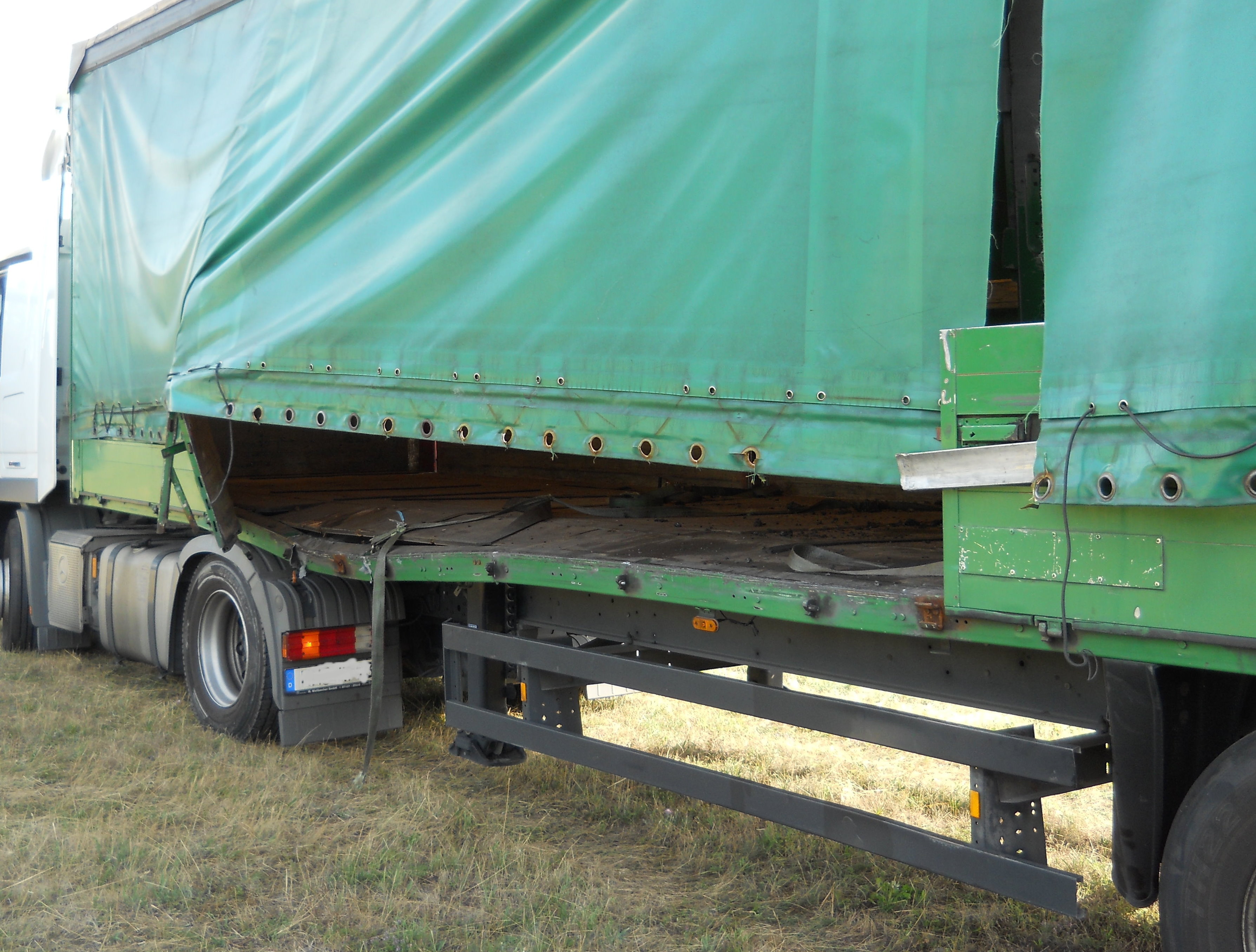 In Figure 7, we can clearly see that a side gate has been ripped off. It is now lying on the road under the press (Figure 3). The front side gate is heavily deformed. And the loading bed is also bent downwards to a considerable extent.

We cannot say whether the press had been positioned correctly on the vehicle. Neither can we say for sure what was underneath the press. We assume that there was anti-slip material, but unfortunately not in a sufficient quantity, or it was mixed with stone debris. So how can a load like this be isolated from the loading surface in terms of friction?

We would then take five or six pieces of dunnage with a rectangular cross-section, completely cover them on both sides with anti-slip material and would position the press on these. Fully-vulcanized anti-slip mats should be used. The mats that can be seen on the photos are granulate mats, which are not always the best choice for very heavy goods.

We would prefer to have seen the four belts (which were used as tie-down lashings) used as loop lashings. In this case, two would have been attached on each side (much as described in last month's Photo of the Month "The jackknife effect or a gravestone in search of a client"). The tie-down component of these lashings ensure that the friction remains reliable and they also actively secure the press with a force of around 8000 daN to each side. The word "around" relates to the angle, which we cannot take into account (cos alpha ½). The prerequisite for this is that the ends of each belt are each attached to one load-securing point and that the belts pass over edge protectors fitted to the edges of the press.

We still have to find 4,900 daN of securing force to the front. Here also, we would use two head loops or loop lashings. As we can see, it is possible to secure the press with direct lashings (see red circles in Figure 8), which would be attached to the slinging points at the top of the press. 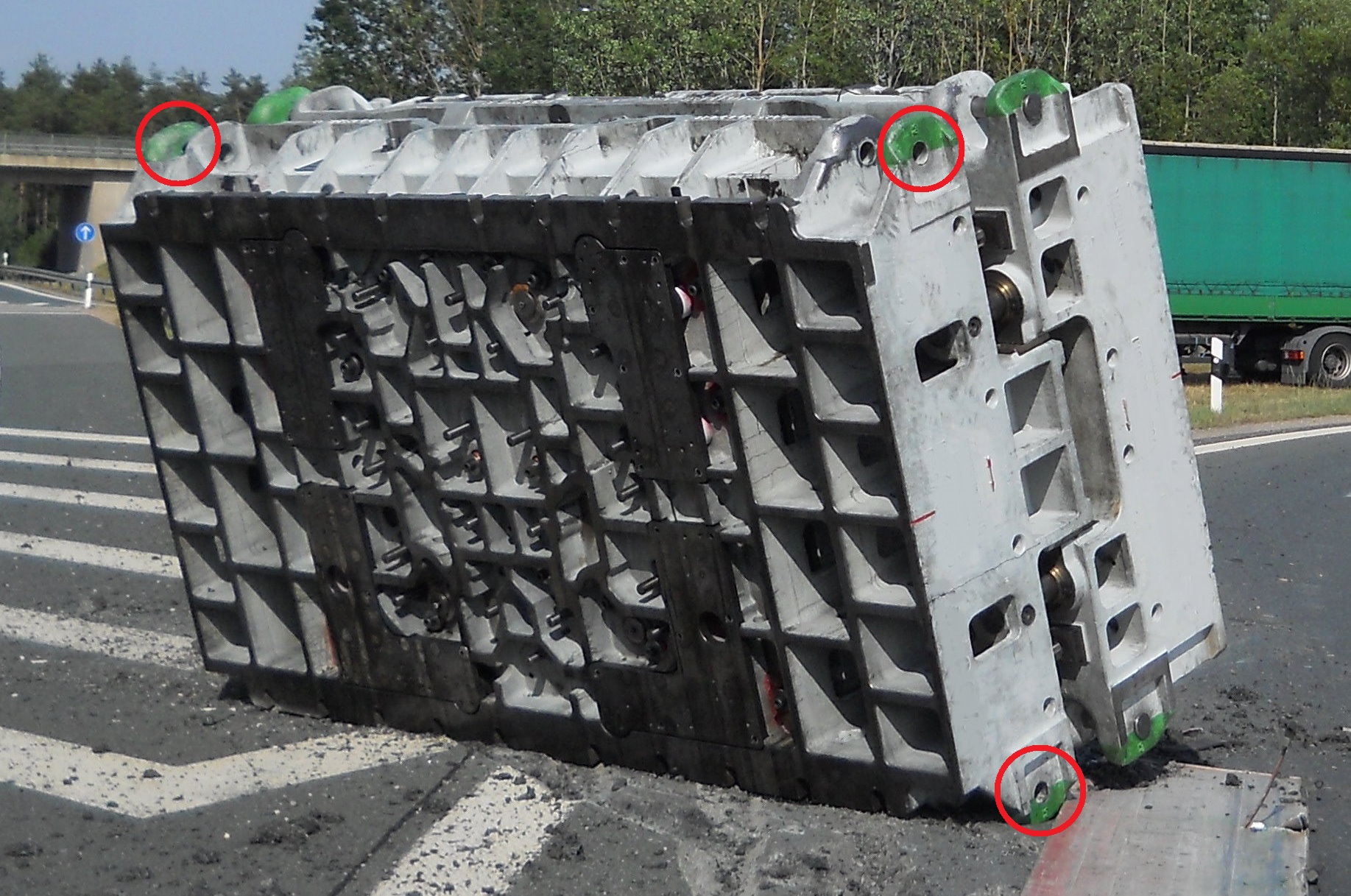 It is up to the manufacturer of the press to guarantee that the slinging points are suitable for this purpose. One would also imagine that it is in the manufacturer's interest that this tool, with a value of almost 400,000 euros, reaches its destination safely. This would be our first-choice securing method. As far as possible, the securing equipment should all be of the same length in order to ensure that each belt or chain takes up the same load. Welcome to the world of static uncertainty! After all, we are talking about 24.5 tonnes of steel here, and not an expanded polystyrene block.

As far as the loader is concerned, we are almost lost for words. It is hardly likely that the driver would have loaded a press like this on his own and set off without anyone noticing. Instead, the press would have been craned onto the truck and the driver would have been left to secure the load himself. But the loader bears responsibility for securing the load. Although he can delegate this responsibility to the driver, he is still required to check that the driver actually secures the load properly. On the one hand, 24.5 tonnes represents a considerable hazard and, on the other, given that the load has a value of almost 400,000 euros, one might expect a little more dedication from the loader. To avoid any misunderstanding: Even if the load is only of low value and does not weigh very much, the loader shares responsibility.

If a person had been injured or killed by this press, a judge would have looked at the responsibility of all three parties involved. In the case of the loader, the management bears responsibility (if this has not been delegated responsibly). Consequently, the managing director would have been in the dock alongside the driver. Which would not have been a pleasant experience.