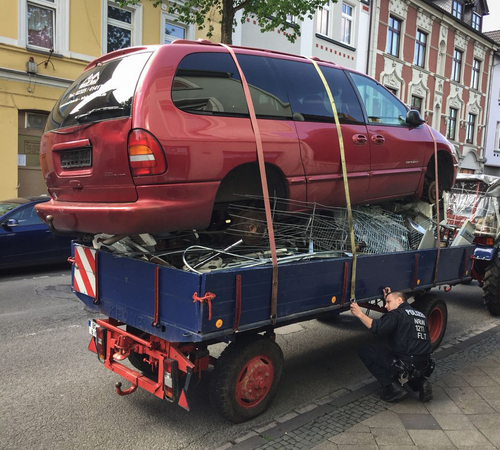 This tractor and trailer made everybody turn their heads: A red van without wheels was perched on many kilos of scrap on the trailer. Load securing? The driver simply shrugged his shoulders. Unsurprisingly, inspection showed that there was virtually nothing safe and secure about this load.

The police officers were astounded when they noticed the tractor with its trailer. The tractor driver was driving through a town in the Ruhr region without a care in the world. The officers pulled him off the road.

The scrap (including a refrigerator, a toaster and metal rods) was stacked on the thin wooden floor and extended beyond the height of the side gates and was not secured in any way to prevent it from falling. Atop this was the van, which the driver had secured with three worn lashing belts. These were anchored to a thin metal rail in the floor of the trailer. The rail had already become bent during the journey, and the van had slipped to one side. The consequences if the driver had had to brake hard are unimaginable.

The officers accompanied the trailer to a local scrap merchant, where the trailer was weighed and the scrap was disposed of.

The trailer was not too heavy. But the driver's wallet was also considerably lighter after the event …