With a title like this, you could be forgiven for thinking that we had mistakenly published the Easter Photo of the Month. But this Photo of the Month has nothing to do with chocolate eggs or even the Easter Bunny. Rather, it is about a load that has somewhat surprisingly become egg-shaped, so we thought that the title was appropriate, even as Christmas approaches. We hope that our readers will agree. 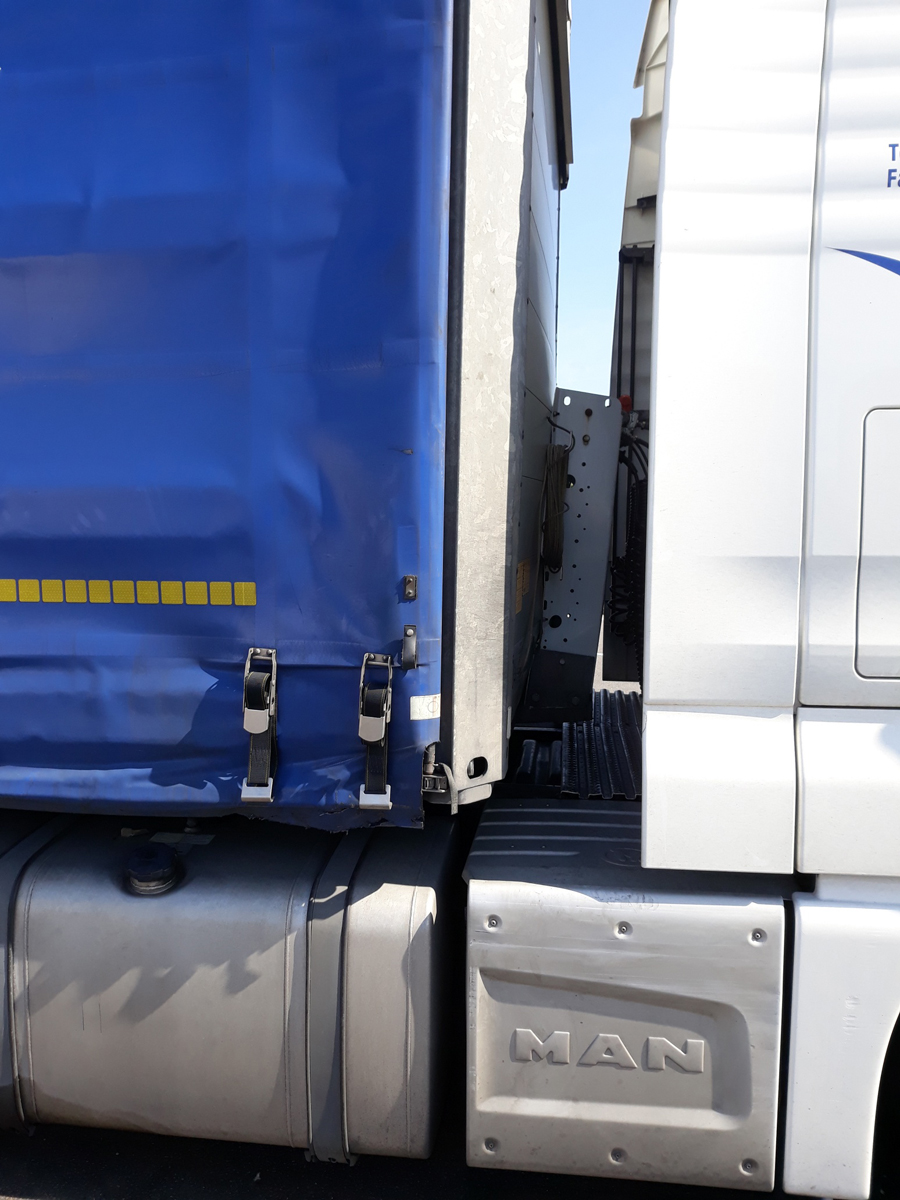 If you take a closer look at this end wall, you will notice the bulge and the slanted end wall support (we are not vehicle manufacturers, so we do not know the technical term for this component). Somebody or something has bent this end wall outwards. Regular readers of our column can already guess that it was the load that was responsible. Otherwise, we wouldn't be talking about it! And so it was:? 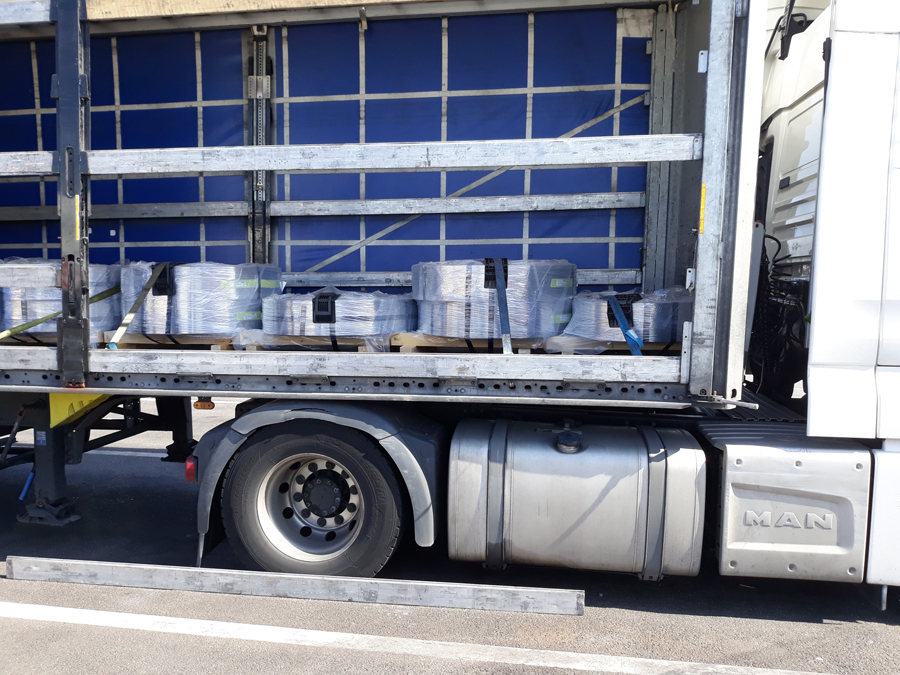 Looking at the loading bed from the right side of the vehicle, we get an idea of what it was that deformed the end wall from the inside. The load comprised 25.8 tonnes of slit strip that was loaded on skids and secured to these with steel straps. The load securing material paints a very ambiguous picture, and we really haven't been able to work out exactly what was going on. Some belts seem to have slipped off, others are conspicuous by their absence, and, for example, the one on the second load unit from the front appears to be placed in exemplary fashion. We shall merely mention the fact that these are tie-down lashings in passing. 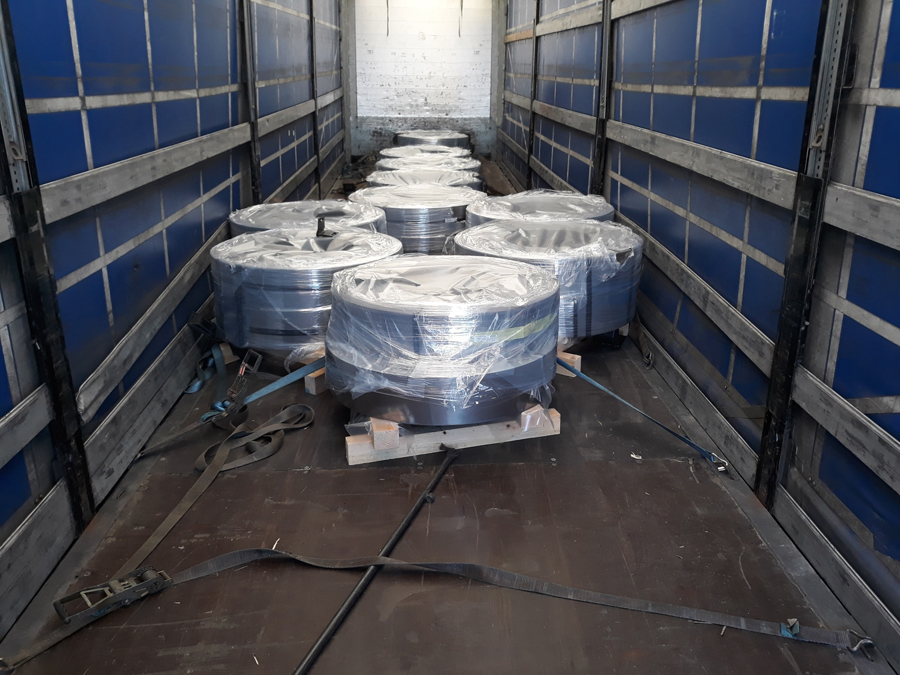 Unfortunately we do not know the exact chronological order of the photographs. However, we do know that this vehicle was found by the Belgian police in a truck park, and the driver was busy "re-securing" the load. This also explains the inconsistencies we see in respect of the load securing measures in Figure 2.

To cut a long story short, this is a load of slit strip that was originally loaded on the vehicle according to the requirements of load distribution. Most of the slit strips had been placed on the loading bed in single file. It was only further towards the back that a block of four was loaded. The last load unit was again placed on its own. Unfortunately we do not know why the vehicle had to brake. The fact is, however, that this was not the result of an accident with a collision, but simply a case of hard braking. This must have happened while the truck was traveling in a straight line, since the load has slipped outwards more or less symmetrically on the vehicle.

The forlorn belt that can be seen in the foreground of Figure 3 has been deserted by its load unit, which has slipped forward by about one and a half to two meters. Prompted by the acceleration relative to the loading bed, the whole of the load slipped forward and collided with the end wall, which offered stout resistance. This resistance was felt by the slit strips that were arriving from behind. Some of the kinetic energy was absorbed by deformation in the load itself, and some had to be passed on to the other elements of the load that were sliding further ahead.

Those skids that were loaded in pairs slipped onto a more or less rigid column of load units, which was resting hard on the end wall, so they had to move sideways. Each moved to its own side, almost symmetrically. As a result, they ended up in the tarpaulin, the removable slats and the stanchions, which in turn reacted by deforming. Since the entire load was secured with tie-down lashings, not a single load unit remained in its rightful place. Instead, the tie-down lashings slipped between the load units and were transformed, at least partly, from nonsensical tie-down lashings to sensible direct lashings. We wouldn't want to go so far as to claim that freely moving loads secure themselves more intelligently than the company responsible for loading (a German one, incidentally) and the driver did. We consider this to be pure coincidence. 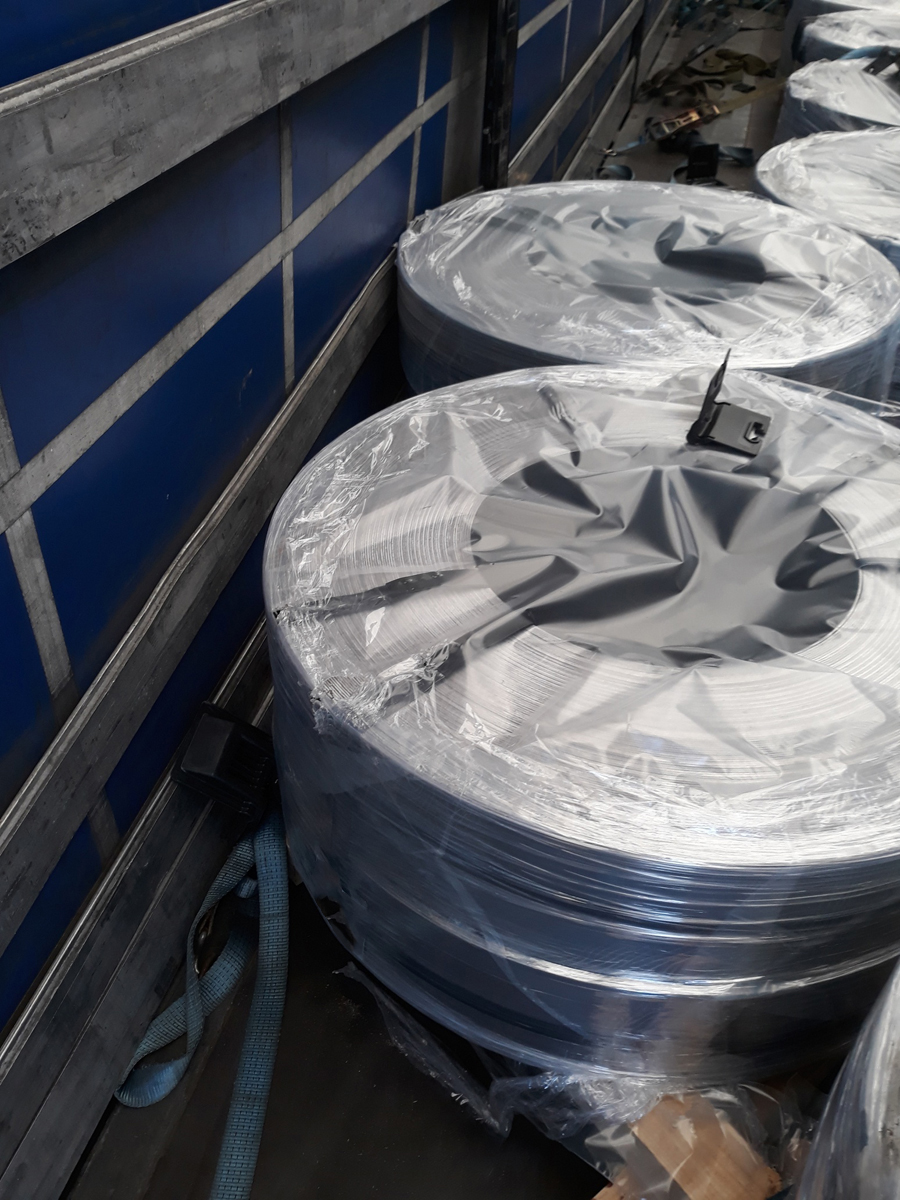 Figure 4 shows nicely that the load has 1) moved sideways and 2) become deformed. As expected, the front pair of the load units that were loaded in pairs has moved sideways much more than the one loaded behind it. The energy that the load itself was unable to absorb by deformation was passed on to the removable slats, tarpaulin and stanchions, which were also deformed in the process. 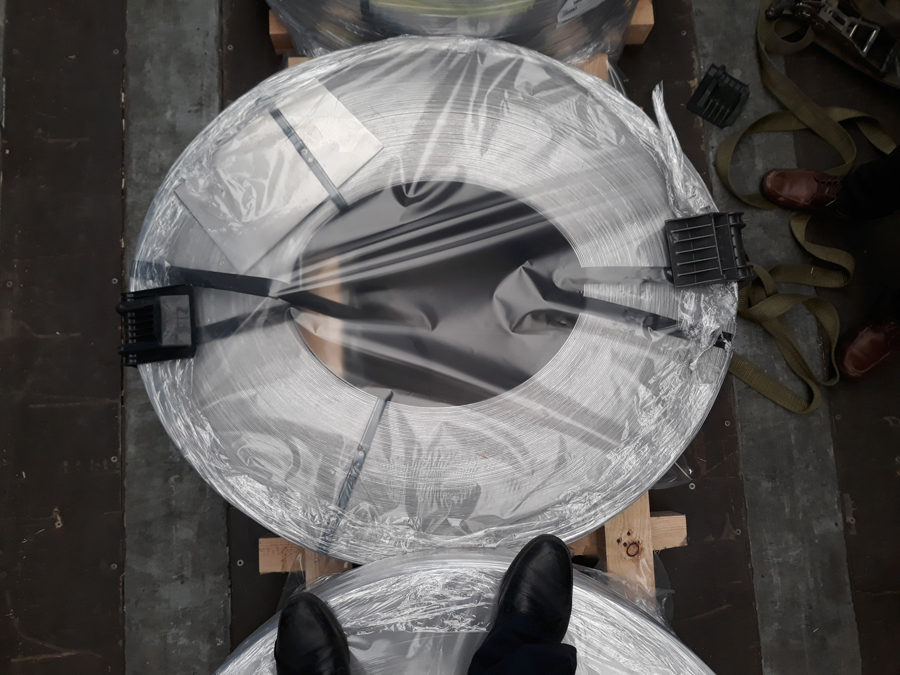 Figure 5 is what gives this Photo of the Month its title: The load, intelligent as it is, has absorbed an incredible amount of energy by deforming itself and becoming "egg-shaped". This deformation will probably make it difficult to persuade the customer to accept this load. We fear that the whole load will be rejected and will at the very least need to be rewound. Maybe some of it will even need to be scrapped. We hope that the poor driver will not be the only one to take the blame for this. We hope that the loading company will also take a good, hard look at themselves. 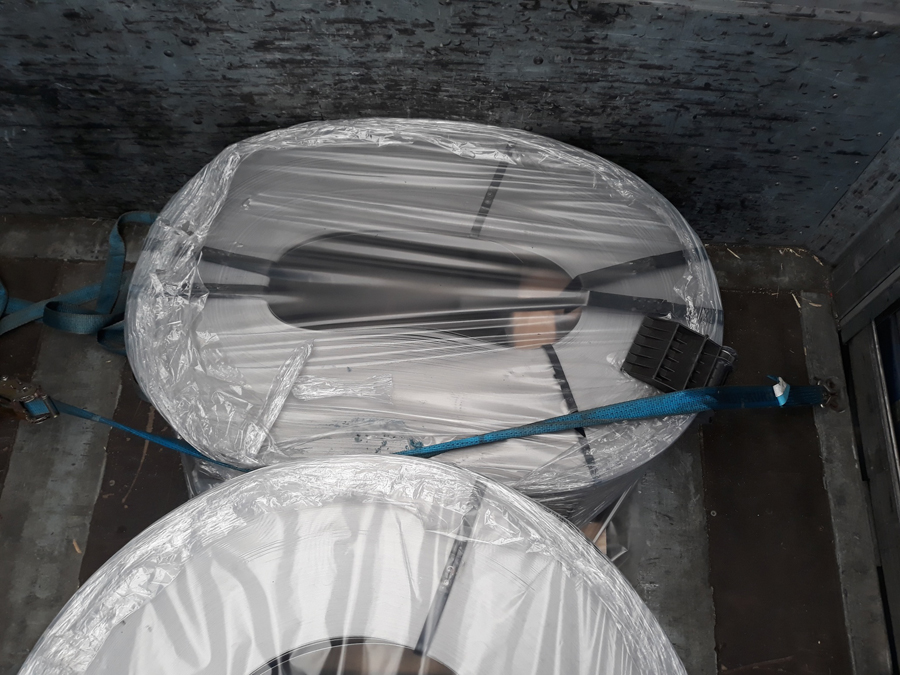 The slit strip on the first load unit suffered the worst damage. Because the entire long row of load units collided with the end wall, it was the load unit right at the front that had to absorb the greatest pressure. The end wall can be very grateful to the load, because if the load had not absorbed so much energy, it would have suffered even more worse.

Anyone who allows loads like this to leave the company premises secured in this way is acting recklessly. Imagine that a braking maneuver such as this one had happened in a long bend. The load would have penetrated the side wall and escaped onto the road. If this had happened in a right-hand bend, the oncoming traffic would have received a nasty surprise. The consequence could well have been death and destruction. In court, the company management would have been standing in the dock right next to the poor driver. Dear negligent company directors of this world: Maintaining a casual management style is one thing, but if you do not delegate your duties unambiguously and do not provide the persons responsible with the necessary training equip them with skills that can be relied on, the responsibility remains firmly on your shoulders. As load securing columnists, we can assure you that it will only be a matter of time before something happens and you find yourself in court.

And so, we make this urgent appeal: Take your responsibility as a loader seriously and ensure that loads are secured sensibly. The driver is certainly the weakest link in the chain and will be grateful for any assistance and understanding of his problems, which are also yours.

Our Christmas wish is for responsible loaders and our wish for you, dear readers, is that you have a lovely Advent season, that your journeys will always be safe and that you will continue to enjoy our column next year. Our Advent gift is that we shall gradually be preparing our Christmas specials over the coming days and weeks, in anticipation of your visit.