Unexpectedly pregnant – or what constitutes a stable load?

In our photos of the month we have often pointed out the close connection between packaging, load units and load securing. This month we want to look at this problem in a little more depth. 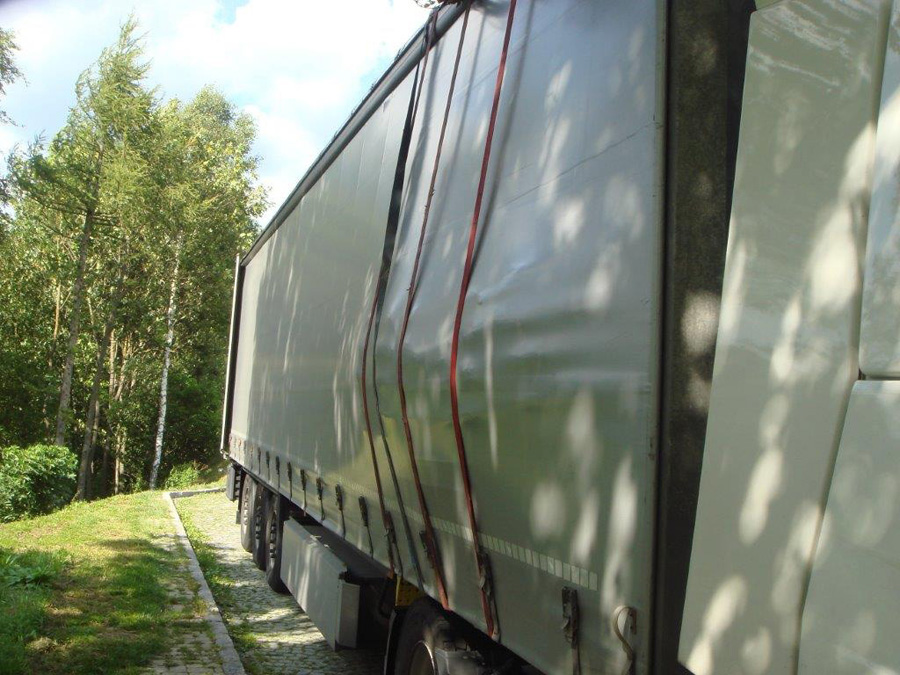 The title itself suggests a mishap. If a trailer suddenly becomes "pregnant" while out on the road, this indicates a massive problem with the load. The load may have moved, which can mean that it has slipped, or simply tipped, or a mixture of both. Alternatively a load unit that was not actually worthy of the name could also have simply broken apart and released its contents. The next photo solves the mystery: 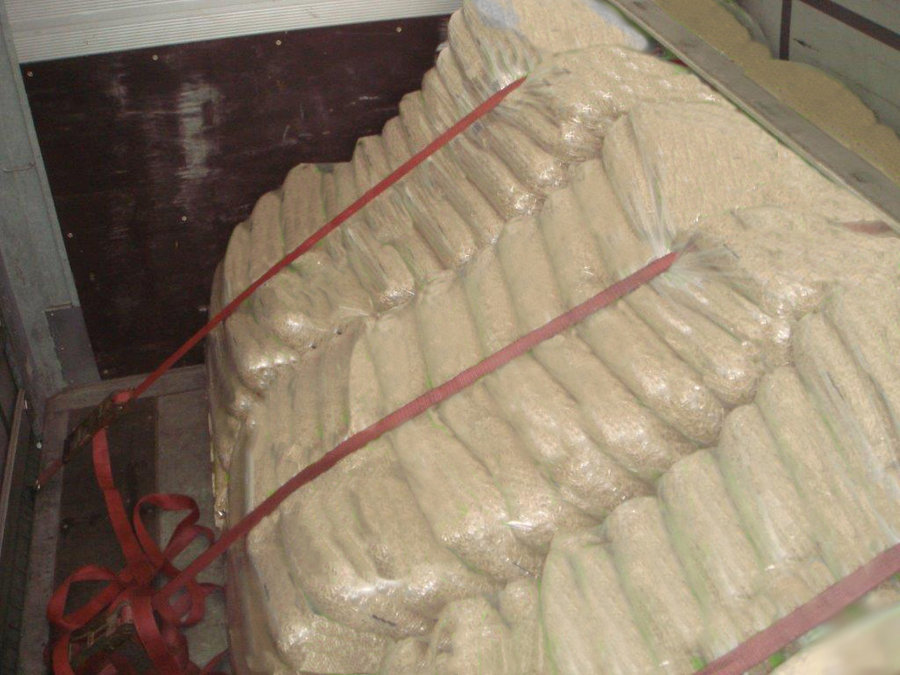 The load units had been loaded centrally at the front (and not in pairs), probably for reasons of load distribution. They had been secured with tie-down lashings, but were in no way suitable for this form of securing. Lateral acceleration caused the load units to lean against the tarpaulin. When the load shifted massively to the right side of the vehicle, the tie-down lashing was partially converted into a "direct lashing" to the side, as the belt was lengthened by the altered load geometry. This generated significantly more pre-tensioning force and the belts cut even deeper into the load. However, this was pure coincidence and cannot be described as a load-securing measure, but rather as a happy accident. It was only with the aid of the tarpaulin and the removable slats, which were bent outwards considerably, that sufficient force could be applied by the body and the belts to counteract the "displacement" and prevent the body from "bursting".

The load consisted of "wood pellets". These pellets are made from sawdust compressed under high pressure. This produces cylindrical "worms" of different lengths, which are quite solid. They are so solid that they behave as their shape dictates in their packaging (plastic bags), i.e. they roll. Since the contents of the plastic bags were not pressed in tight, the pellets were able to avoid any force acting on them from the outside. And this is exactly what they did, as is clearly illustrated in Figure 2. The belts were able to work themselves two bags deep into the load unit. This completely nullified the effect of the tie-down lashing. Why?

Quite simple! Tie-down lashings are placed over the load and pre-tensioned by hand. This (pre-)tensioning force artificially increases the weight of the load, thereby increasing the friction of the load on the loading area and within the load unit itself. Since the load was able to escape from the force from the belt, the pre-tensioning force was completely lost, which meant that the load was not secured. It was only the displacement during the accident that produced a chance direct lashing effect, as described above. 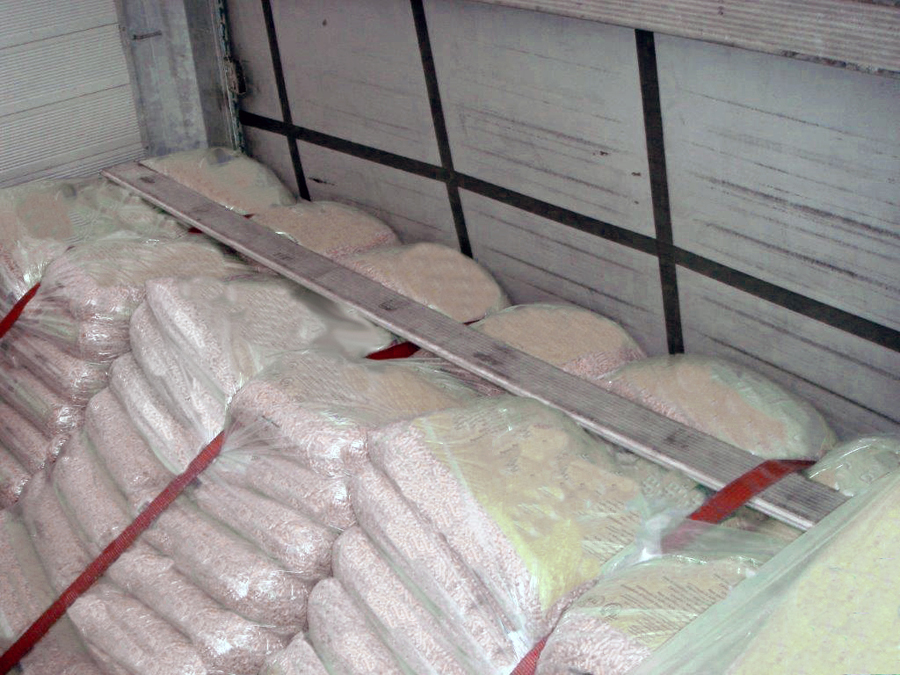 Clearly, the driver was at least partially aware of this circumstance, because he tried to distribute the pressure of the belt with a slat. Such measures can only ever meet with limited success, and only if wide angle-pieces are used instead of removable slats. 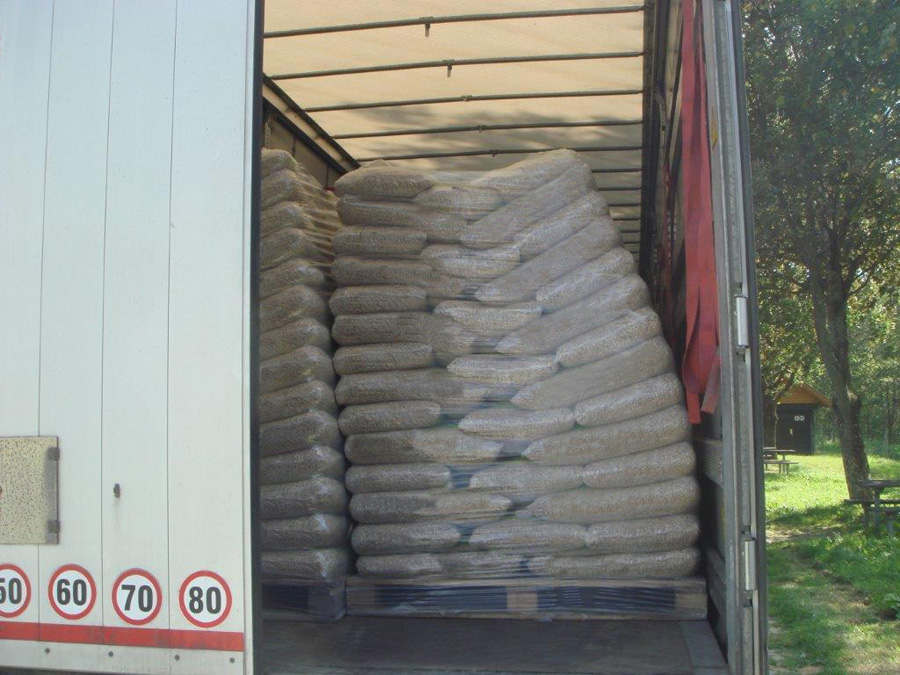 Figure 4 shows just how dreadful this attempt at loading the goods was. The load units are so loosely packed that even optimum pressure distribution cannot achieve a securing effect. As you can easily see, there was also movement throughout the load unit at the rear of the vehicle. The load "rolls" and gives way in its sacks. The bags are stacked so loosely that the load unit can be formed like a lump of clay in a pottery course. Any attempt to secure the load will fail. 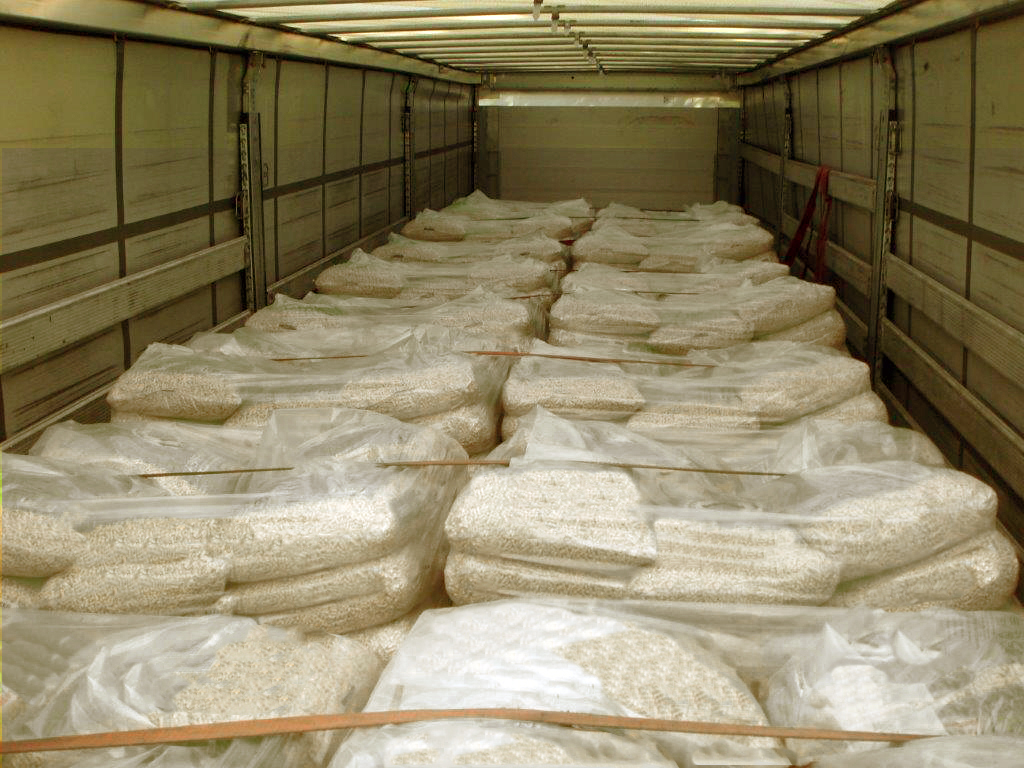 We mulled over this one for a long time and did not come to a satisfactory conclusion. One idea was to place wide edge protectors over the upper corners of the load units. These were then to be secured with alternate tie-down lashings and with crosswise direct lashings. However, we saw the risk of the load unit wriggling out from under the lashing because it could be so easily deformed. An additional lashing at half the height of the load unit would reliably avert this risk. However, for it to be possible to attach all these direct lashings, the load units would have to be loaded lengthwise with a small gap between them. This in turn would cause problems with securing the load lengthwise.

So how can a cargo like this be loaded properly and safely? Ideally, vehicles with rigid bodies such as box bodies or containers should be used. But even in such vehicles, gaps must be closed.

What constitutes a stable load?

That is the most difficult question of all. Almost everything that is transported in sacks or big bags (which are also sacks) is bulk cargo in the broadest sense. The rigidity of the individual sacks depends to a certain extent on the friction between the elements of the cargo itself, but primarily on the extent to which the bags have been filled. If these are filled to capacity with goods, as is the case with cement sacks for instance, it may be possible to secure them with tie-down lashings. In this case, it is also important to assess the level of friction between the sacks. Some bagged cargoes are palletized using adhesive, which considerably increases friction (between sacks) and contributes to good load units. The friction between the sacks and the pallet still needs to be looked at. Once this question has been answered, the question remains as to whether the sacks were loaded flush to the pallet or whether a gap between adjacent load units is unavoidable when the sacks are loaded in pairs due to the fact that the sacks do not teach the edge of the pallet. Once these questions have been answered, the pressure distribution and the issue of the strength of the bags themselves must addressed. Distributing the pressure as widely as possible can be invaluable here.

The main question we are asking ourselves is: How can a loader, who bears at least as much responsibility for load securing as the driver, even consider sending such "soft" load units onto the roads? To make matters worse, the loader has loaded this truck so carelessly and could clearly not care less about his duties.

For the benefit of all loaders, we shall repeat that:

Every loader is also responsible for securing the loads of the cargoes loaded in their company. If the persons responsible for loading and load securing in the company are not adequately instructed, trained and authorized to do everything in their power to avoid unsafe loading, the responsibility immediately passes back to management. This is known as the qualified delegation of responsibility. Those managers who take this responsibility lightly should understand that in the event of an accident which can be traced back to inadequate load securing and possibly ends in personal injury, the courts will take plenty of time to investigate the case in considerable detail. While it is true that the driver is always to blame, even judges exercise common sense and will ask themselves how the loading company has fulfilled its responsibility. If investigation and questioning then paint a picture of negligence, the managing director will very quickly be standing alongside the driver in the dock. And the question will be asked as to who may have had greater influence on the loading in this case. And, quite honestly, we would not like to be in your shoes, managing directors.

It should always be remembered that the loader is the most important person in the entire chain. If they do their job properly, nobody will have any further problems during transport.

We hope that everyone involved in loading and transport will take their responsibilities seriously at all times.