One fine day in the beautiful Netherlands, 21 tonnes and 220 kg of steel sheets set off together on a trip to Belgium. Their dimensions were impressive. Their length was a massive 8 m, and their width of 1.5 m was also pretty hefty. Even their thickness of 2 mm was not inconsiderable. All in all, it was a happy band of travelers that chartered a curtainsider for their trip.

And so it came to pass that the articulated truck approached a motorway intersection in Belgium that was unfamiliar to the driver. In this intersection, the driver had to negotiate a sort of chicane, which clearly surprised him, as he had to brake relatively hard in a long right-hand bend. And so he pushed down on the brake pedal. This instructed all the wheels to "brake", which they duly did. Unfortunately, the message never reached our happy band of travelers. Nobody had said anything about braking, otherwise precautionary measures could have been taken when planning the journey to ensure that there was some way of hanging on to the loading bed. But everyone was in a holiday mood, so they had already rubbed in the oil. After all, you never know how strong the sun will be. 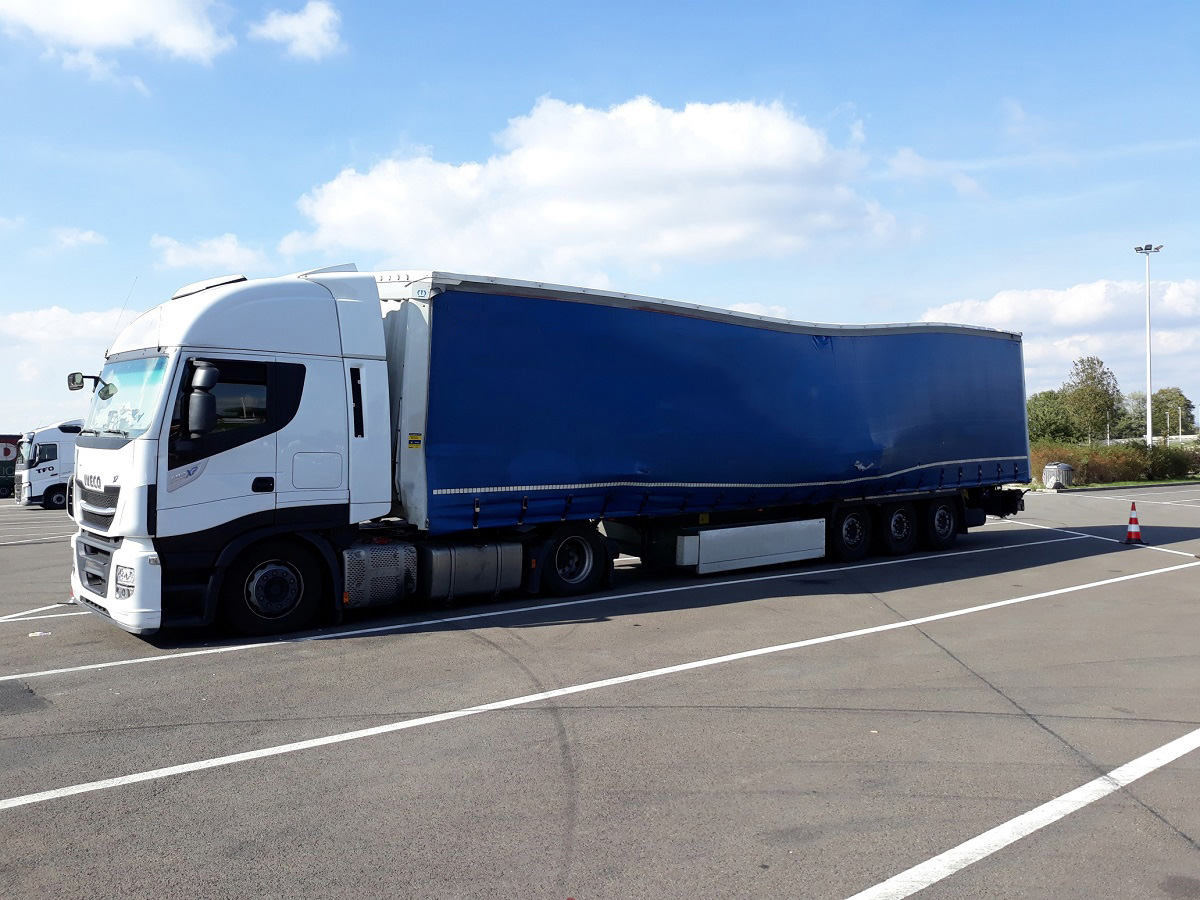 This photo allows us to guess what happened. The load comprised several stacks of steel sheets with dimensions of 8050 × 1500 × 2 mm, and was lightly oiled to protect the steel from corrosion. The total weight was 21,220 kg. When the vehicle braked in a gentle bend to the right, the load shifted forwards by around 2 m and also slipped to the left as a result of the bend. 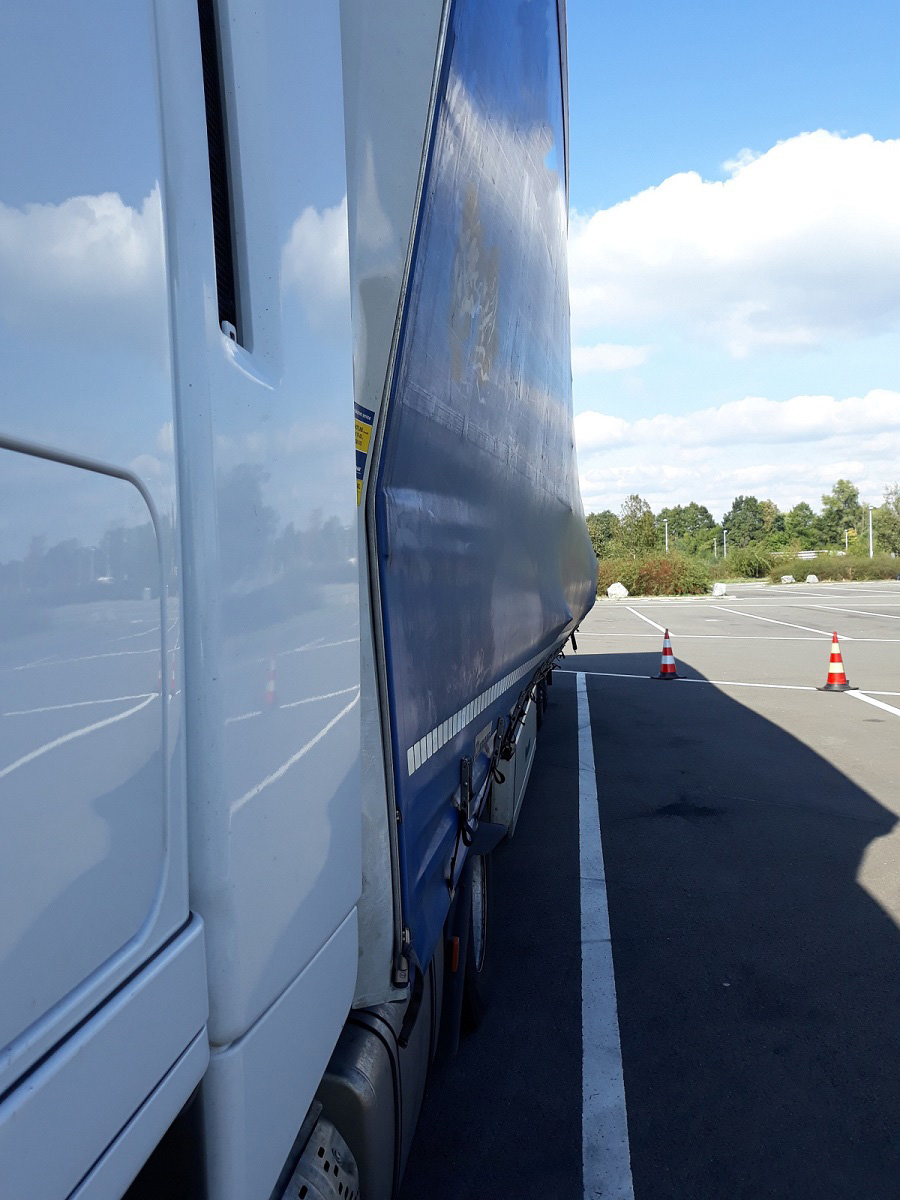 The superstructure was unable to withstand the sheer force of the dynamically shifting load. This can be seen from the deformation of the end wall, and indeed by the massive damage to the end wall evident in some of the other photos. Following the accident, the load is resting heavily against the tarpaulin, which has been partially destroyed. 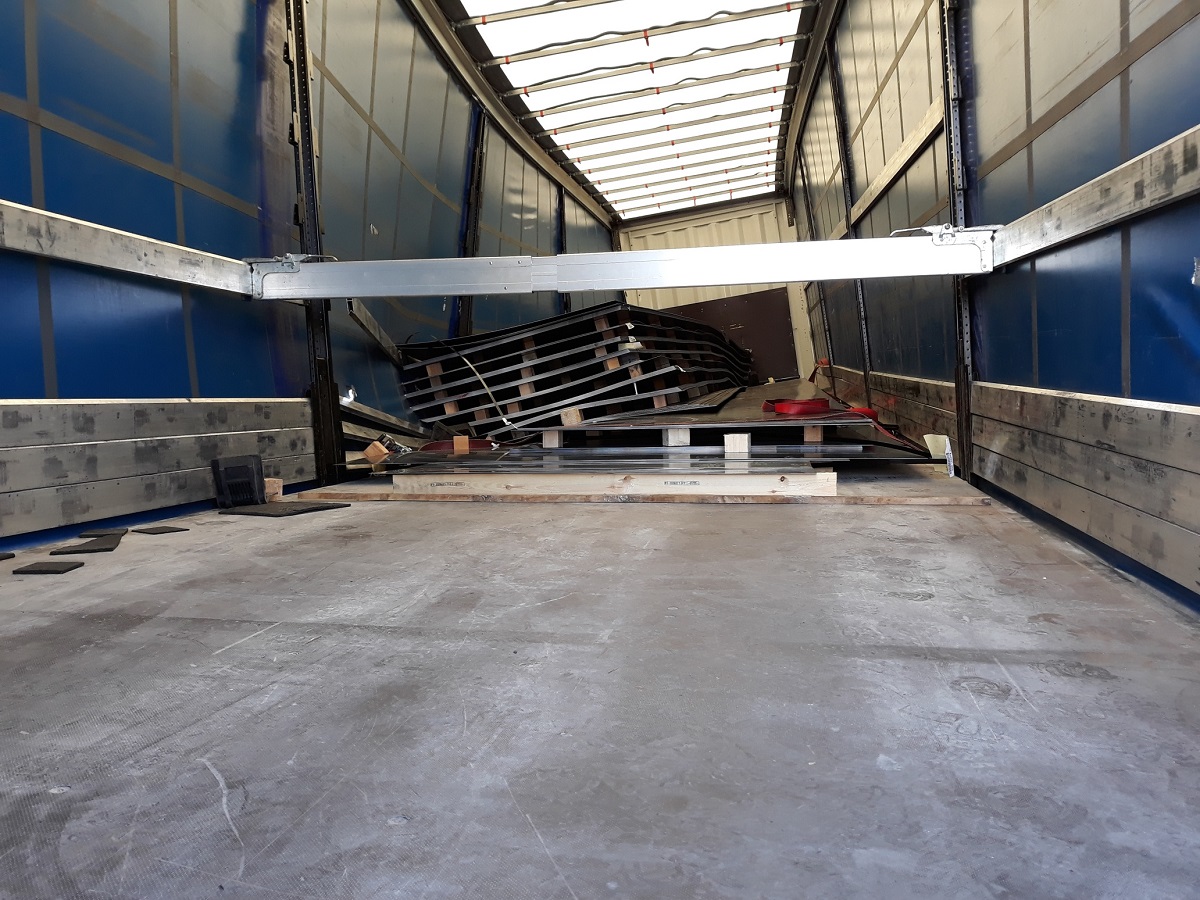 The load had originally been placed 2 m from the end wall, presumably for reasons of load distribution. The load had shifted forwards and to the left as a result of the braking maneuver. 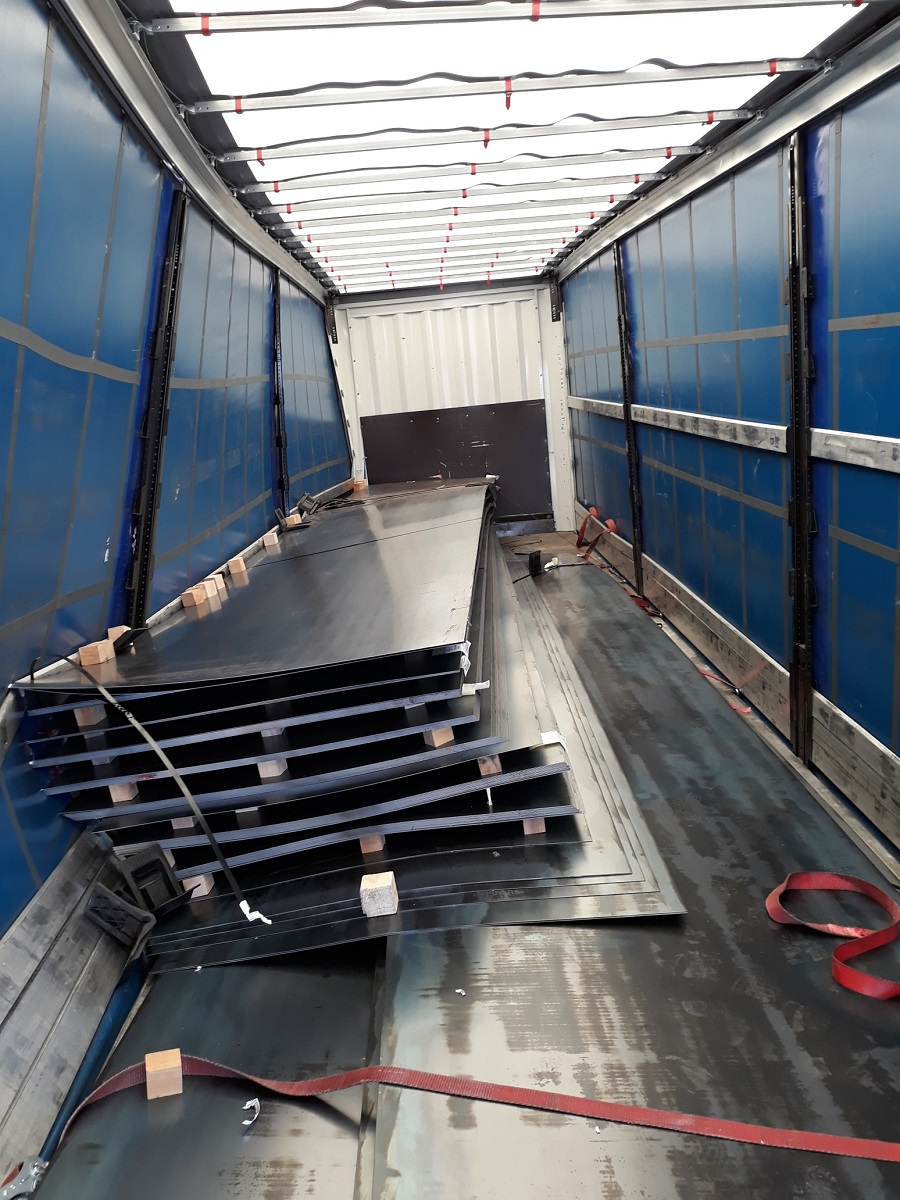 Figure 4 gives a rather untidy impression of the load spread over the loading bed. Wooden blocks are scattered around, as are belts, or at least their component parts. And steel straps are simply hanging around aimlessly. Like the wooden blocks, edge protectors have been thrown around and it is difficult to reconstruct where they were originally meant to be. The Belgian police have told us that the sizable load was secured by 5 tie-down lashings. Attempting to secure oiled steel sheets with tie-down lashings beggars belief. It is as bizarre as a few hundred ants meeting up in the zoo to steal an elephant.

As load-securing columnists, we can hardly contain our fury when we see that a steel mill or steel distributor has allowed a driver to take a load on the road in such a condition. If the driver had had to brake in a bend in a built-up area, the steel sheets could have shot into the road with all the frightful and fatal consequences that we associate with guillotines. We sincerely hope that the Belgian law enforcement officers made clear to the company responsible for loading exactly what obligations they have. 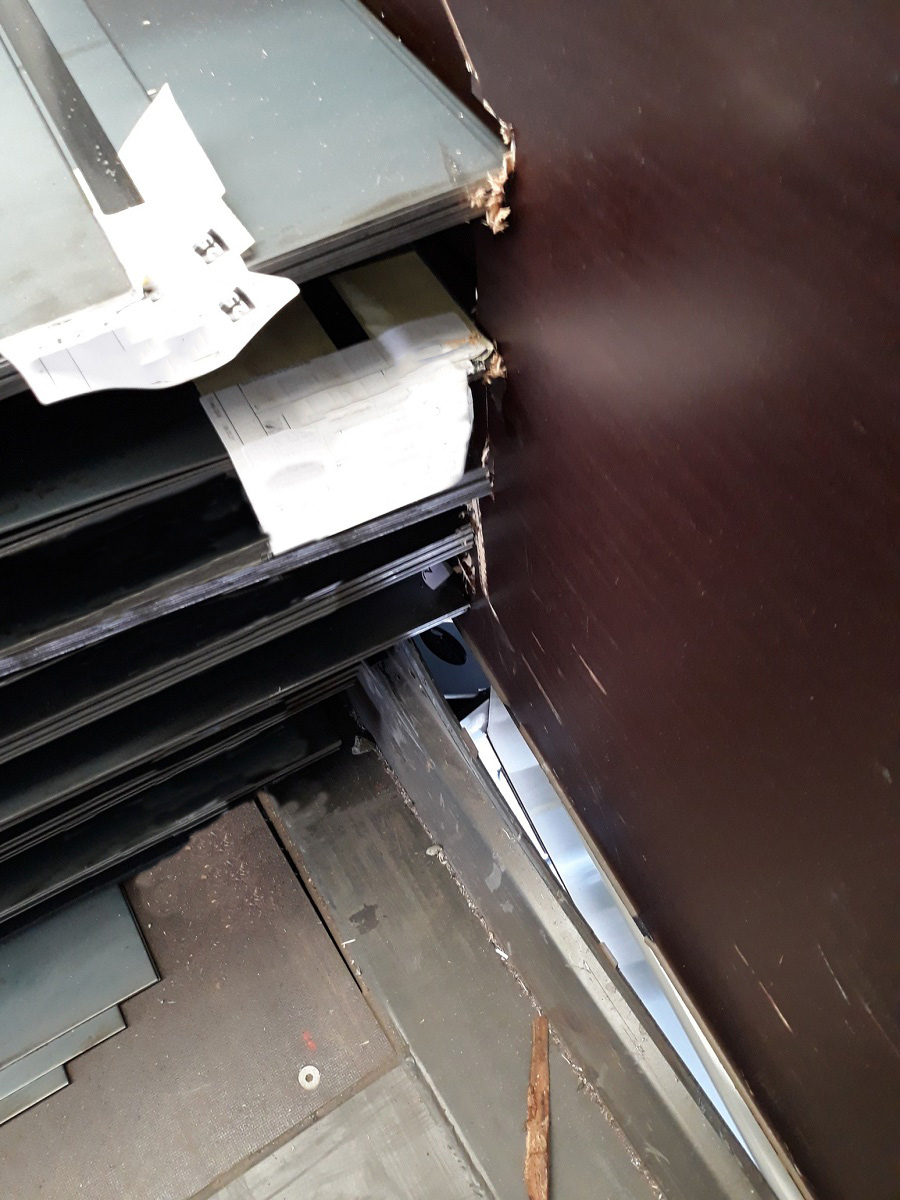 Let us take a more objective look at the way in which the load was secured and examine the consequences of the load colliding with the end wall. The end wall was not only bent to one side, it was also ripped out from its anchoring points at the bottom. As we saw in the first two photos, the end wall was also bent to the left above the roof spar. 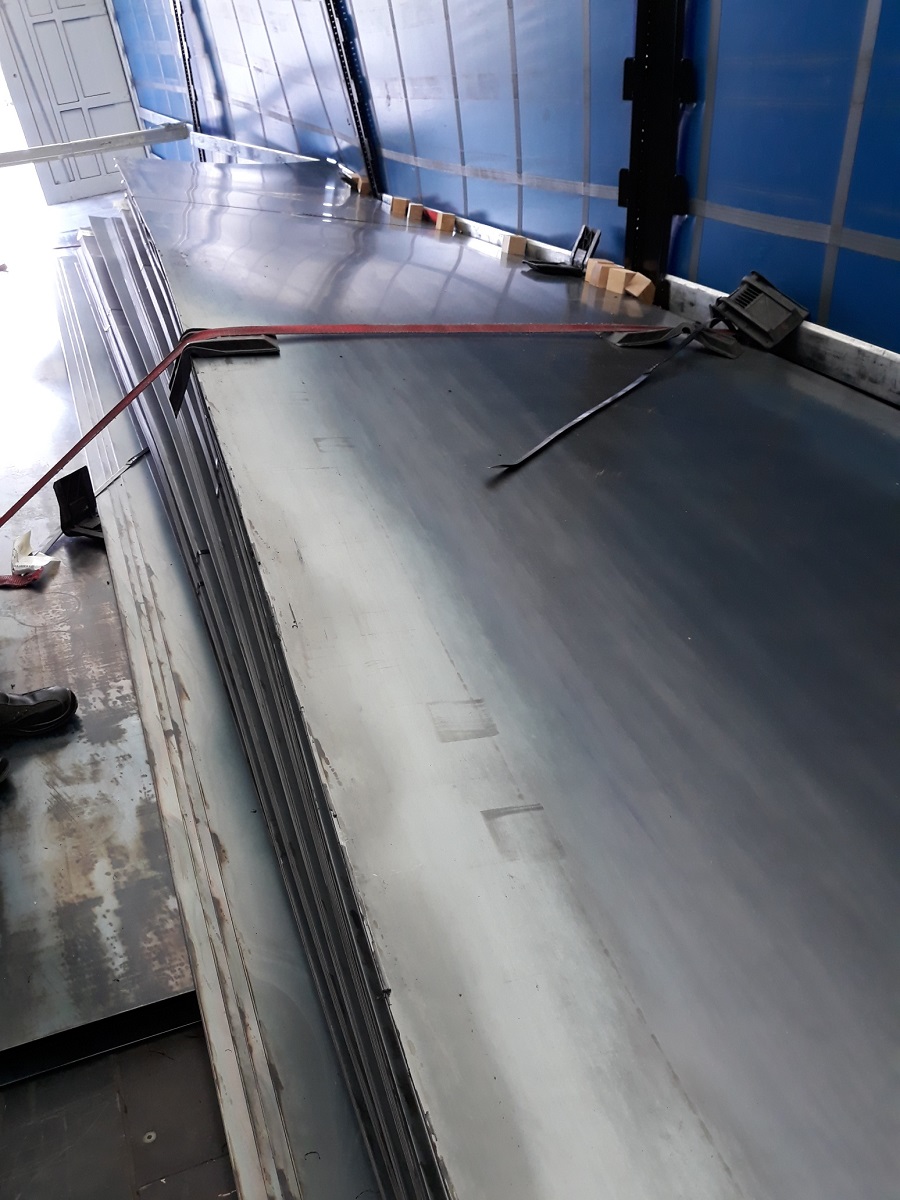 As we mentioned above, the load was secured with 5 tie-down lashings. One of these tie-down lashings clearly did not fail, although it cannot really be said that it restrained the load. The only thing to say is that it was not cut through. Despite these "securing measures", the load was free to slip 2 m forwards and cause the considerable deformation and destruction that we see. The fact that the load is twisted slightly to the right on the loading bed is explained by it first hitting the end wall, which restrained it a little to the side, and then coming to rest further back against the somewhat "softer" superstructure of stanchions, tarpaulin and removable slats. 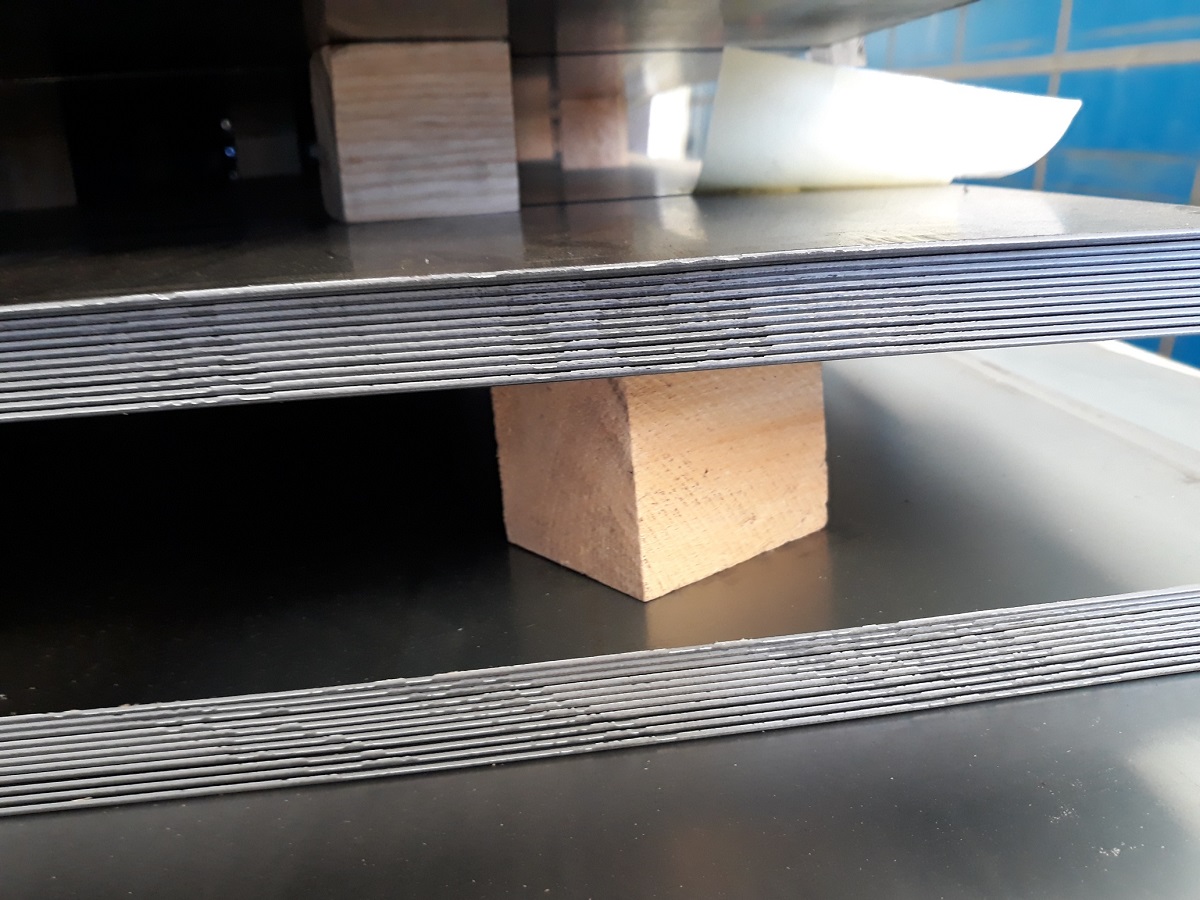 This photo sums up the thoughtlessness and negligence of the company responsible for loading. The steel sheets were probably loaded as individual packages by forklift trucks. Spacers in the form of square wooden blocks were placed between the packages of steel sheets to allow them to be easily unloaded again with a forklift truck. It is entirely moot whether an intermediate layer like this did the steel sheets any good. The simple fact remains that the steel sheets were oiled and stacked and tie-down lashings were chosen to secure the load. It is pretty well impossible to make more serious mistakes when securing a load, because the selected method works as a result of increasing friction by applying pressure to the load. As we have said several times before in this column, this method of securing a load absolutely benefits from good friction. But because the steel sheets had been oiled to protect them from corrosion, the measures taken to secure the load were not particularly useful. The effectiveness of these measures is something in the region of one or two percent. If anyone believes that it makes sense to secure a load in this way, they are more than welcome to do so, but not on our European roads. And in all probability, the rest of the world would be just as unhappy about such lunacy as we are. 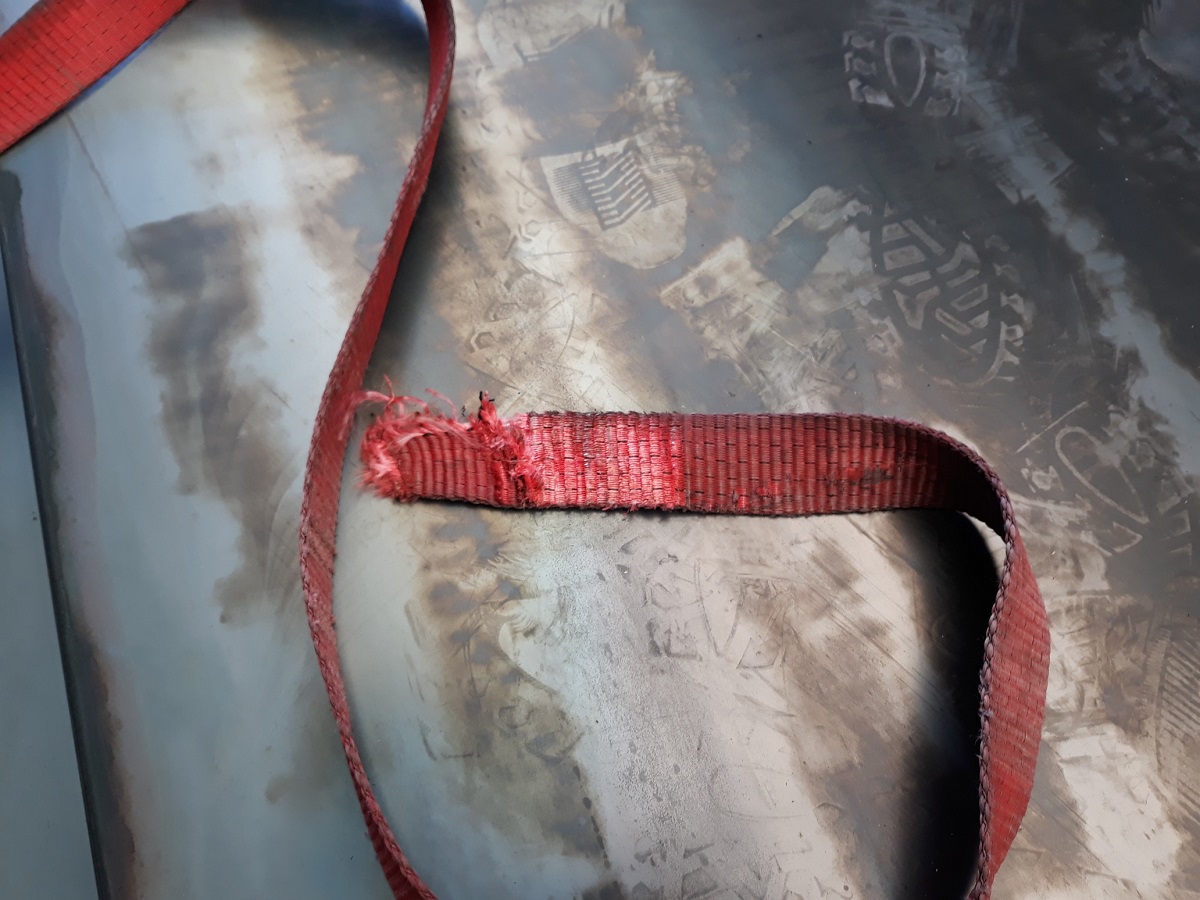 Figure 8 is what gave this Photo of the Month its title: Cutting edge load securing!

The "cutting edges" of the load are precisely what sliced through 4 out of the 5 belts.

If a company really wants to ship unpacked steel sheets that have been treated with corrosion protection oil, securing the load is complex, since the measures have to replace the packaging as well as actually secure the load.

There are several possibilities. If you use a vehicle that is well suited for transporting steel, you can assume that it has several rows of stanchion sockets across the loading bed. A row of stanchions can be inserted in these sockets next to each other or with only small gaps between them, thus creating an artificial end wall to the front of the vehicle. Stanchions can also be inserted at the sides, thus providing a good way of securing the load as a tight fit. If residual gaps are necessary, they should be filled effectively with wood. It is highly recommended that you should have a stanchion diagram to hand, since the resistance of a stanchion decreases drastically with height. A rough estimate is that a stanchion only delivers approx. 10 % of its securing force at a height of 1 m. If the stanchions have a load securing point at their upper ends, they can be dramatically reinforced by direct lashings and thus genuinely create an effective artificial end wall for our steel sheets.

If the load of steel sheets is to be transported using the vehicle shown here, we would opt for wooden intermediate dunnage with a rectangular cross-section and also cover the cargo block with rectangular lumber, at least at the sides. In this case, the rectangular lumber used at the sides must be as long as the cargo block is high. Steps must be taken to ensure that it is possible for the loop lashings that we recommend to be protected as they pass back under the load. Of course, the edge protectors that can be found in abundance on this vehicle must also be used to provide additional protection for the belts. Since the steel sheets are oiled and the coefficient of friction cannot be defined, we recommend ignoring friction when securing the load. In this case, the load must be secured to the front with 80 % of its weight force and to the sides and rear with 50 % of its weight force in each case. This requires some considerable effort in this example. Three loop lashings must be used on each side to secure the load to the sides. A total of five loop lashings must be used against the direction of travel. Care must be taken to ensure that these loop lashings are attached in a staggered manner so that they are all of the same length as far as possible. This is illustrated in the following diagram: 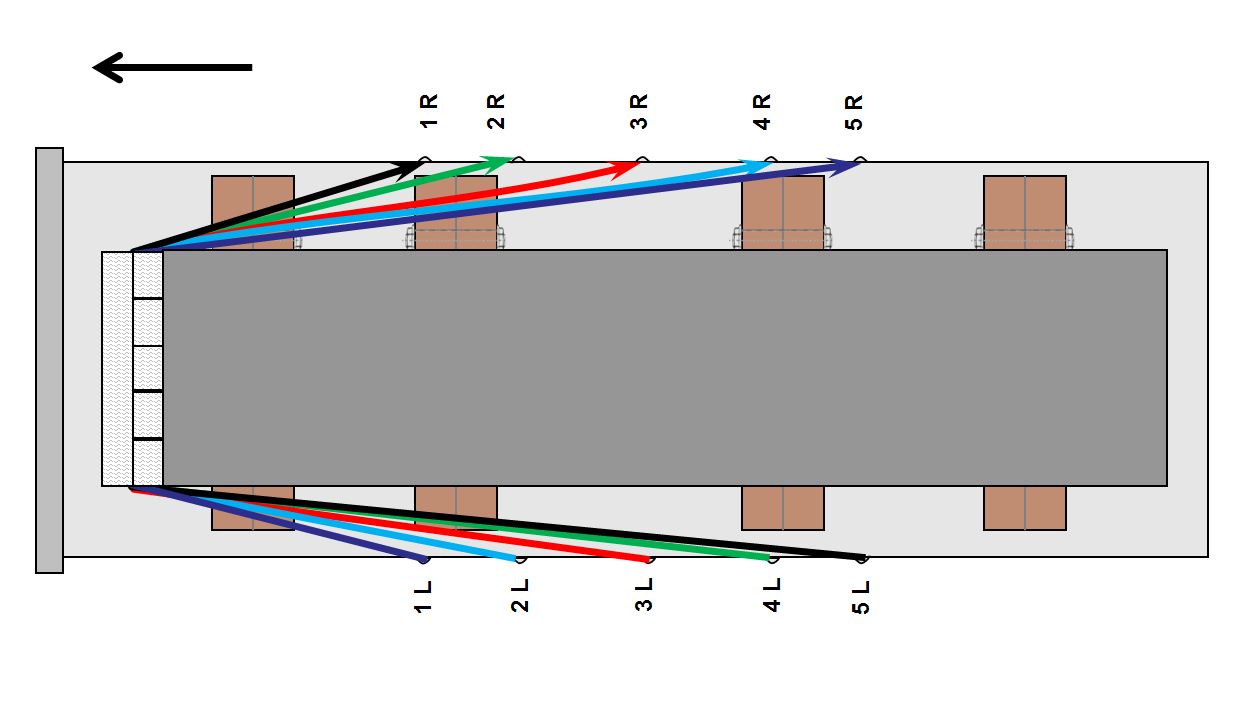 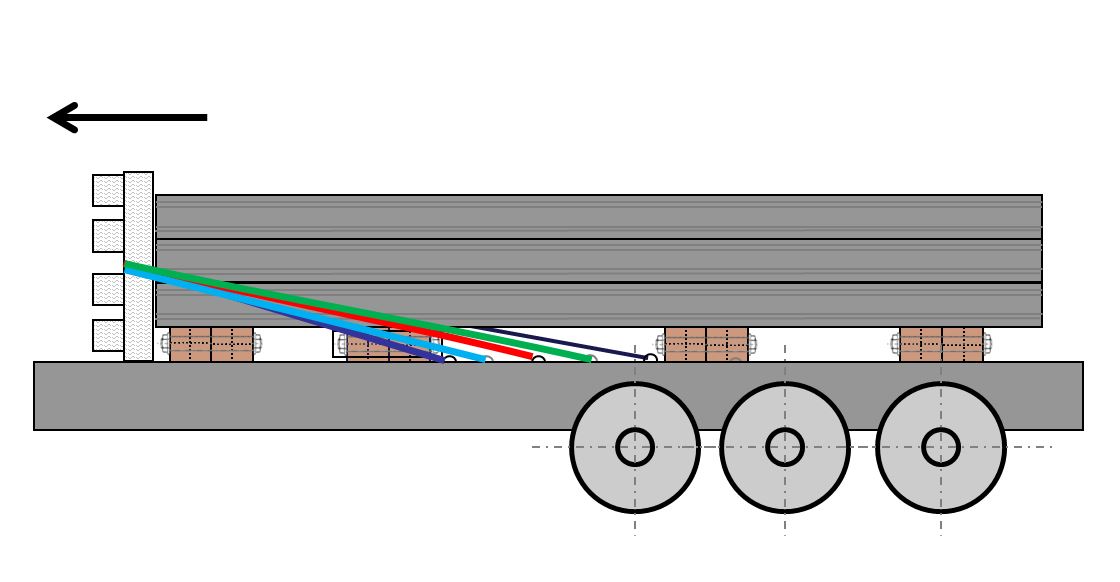 Three loop lashings are also necessary to secure the load to the rear. The entire end face must, of course, be "cladded" with rectangular lumber or equally robust material to prevent steel sheets from shooting out from the stack.

The German transport trade association also tests anti-slip materials when they are contaminated with oil. If you want to use anti-slip materials, you must make sure beforehand that they are genuine tested materials. But even if this is done, it is absolutely necessary that the steel sheets have been packaged to a basic level. What we mean here is that the steel sheets must be bundled together lengthwise and crosswise with steel straps to form individual packages. If this is not done, it is pointless to use anti-slip mats because the individual sheets in the load slip on each other and not on the intermediate dunnage which has been covered with anti-slip material on both sides.

This Photo of the Month has left us saddened and wondering whether the work we have put in over the past 17 years has been wasted effort. How is it possible that there are still companies that have such a reckless disregard for the laws of physics and the requirements of safety on the roads and at work.

We hope that all our readers will have a far greater understanding of physics and load securing. With a little common sense, it is not really that difficult.

We wish you a safe journey at all times!