This month, we are putting in a word for the firefighters up and down our country. Firefighters, especially those near a motorway, experience some quite astounding things. In the aftermath of accidents they put out fires, protect life and the environment, salvage cargo and provide assistance even in the most difficult circumstances, for instance when hazardous goods are involved. They need to have a wealth of knowledge, have enjoyed excellent training and are on standby around the clock. And so, from all of us here, a big THANK YOU. 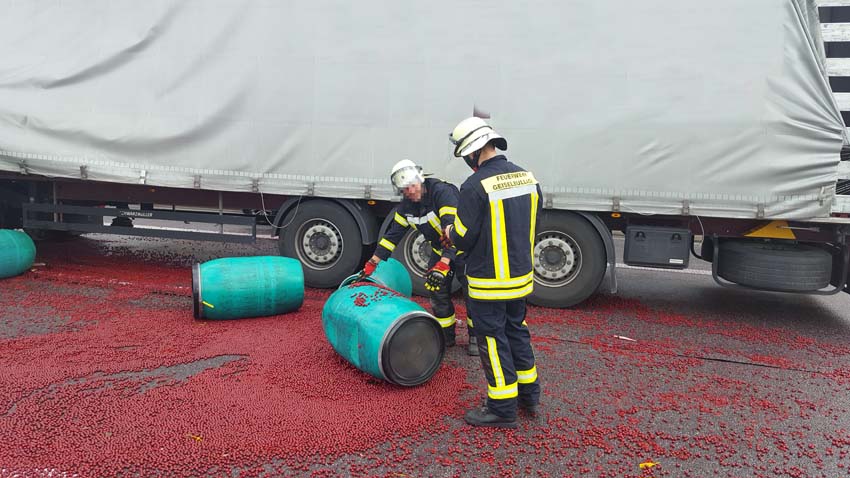 If we take a look at Figure 1, we suspect that these firefighters would have had a very different idea of what the cherry harvest involves. It is undoubtedly more pleasant to "harvest" (or rather "salvage") damaged drums amid the smell of freshly harvested cherries, than to rescue injured people from burning wrecks, but it makes one's hair stand on end to think about why this operation was necessary. 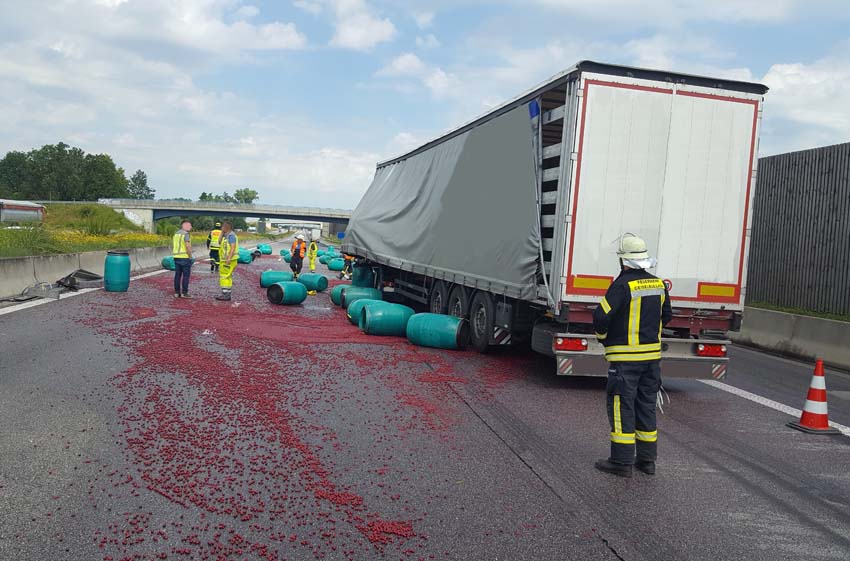 So what happened? The highway maintenance department was mowing the verges. This mowing work had been announced (traffic news on the radio, etc.) and the familiar three warning vehicles were protecting the relevant stretch of road. The driver of this articulated truck must have been extremely distracted, as he did not notice the vehicles and only braked hard at the very last moment. The truck did not collide with any other vehicles, but the load of plastic drums filled with cherries also had to be stopped somehow. The plastic drums had no brakes of their own and no anti-slip material was used. Neither, indeed, was any other securing material used. And so, these drums were accelerated relative to the loading bed as a result of the braking. 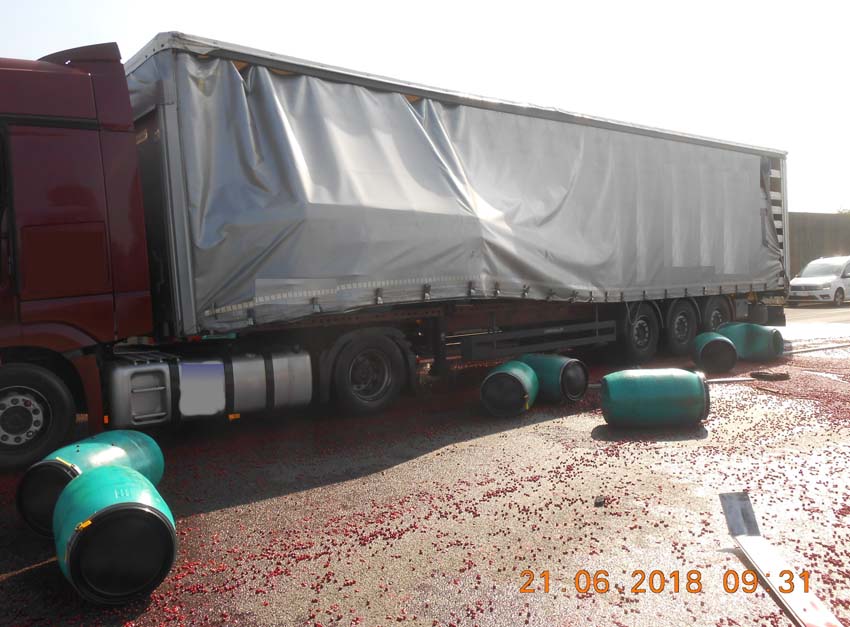 When such relative acceleration occurs, these drums start to move on the loading bed – in the direction of travel. Despite the practicality of these plastic drums in terms of loading (they are light and stable and can hold 200 liters of cargo) they have two serious drawbacks in terms of load securing: they are flexible and have a rotten coefficient of friction. The flexibility means that the drums can be compacted considerably, freeing up space and giving the other drums behind them even more room to slide even further. And because sliding is so much fun, everything slips forward in a scrum at the front. 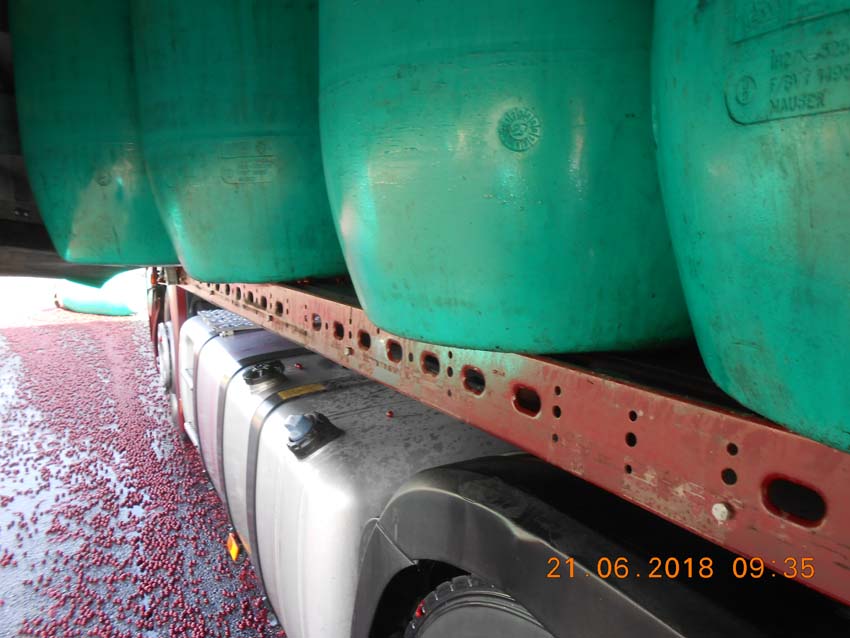 The consequence of this jostling is a "load clot" such as the one we can see in Figure 4. As they were pushed together, the flexible drums built up pressure to the front and to the side. Although the number of removable aluminium slats is actually quite exemplary, they and the tarpaulin were unable to withstand this pressure and bent significantly, shedding the load onto the road. As can be seen in Figure 5, traffic had to struggle past this "cherry harvest" on the hard shoulder for six long hours . And that represents a significant loss to the economy!

We are very pleased to know that nobody was injured, since, by some miracle, there was no vehicle in the fast lane at that precise moment. 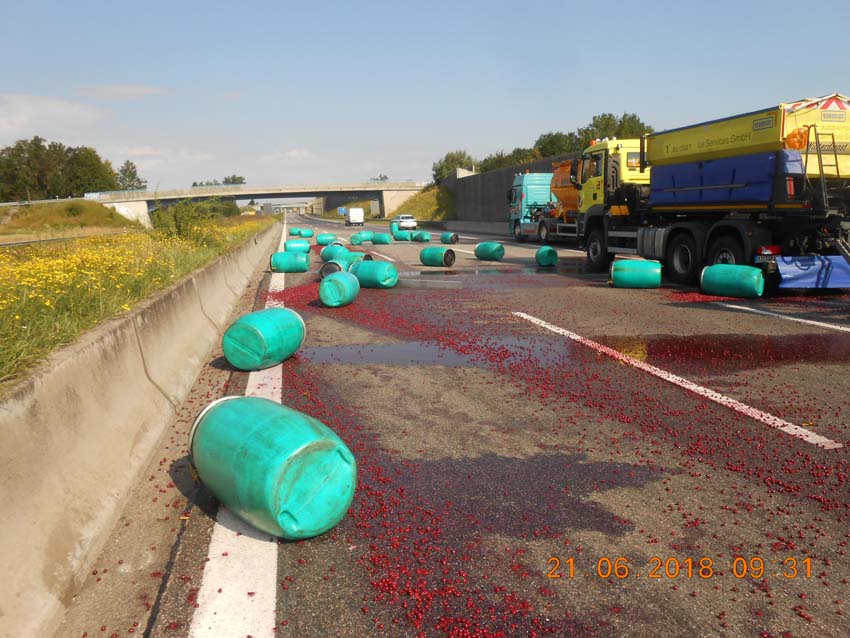 The result was that the motorway was contaminated with more than 20 plastic drums. But tens, or maybe hundreds of thousands of cherries rolled aimlessly across the motorway and had to be removed in a 6-hour cleanup operation. It is not known whether or not the cherries were still in possession of their stones. We shall simply assume that this was the case and point out that friction always plays a role when vehicles brake on the road. But if the road is covered with thousands of cherries, we are reminded of the trick with a bag of peas in the old cartoon films. Any following traffic would not only have hit the drums, but the vehicles would also have braked entirely erratically – or perhaps they would not have braked at all if they had simply continued rolling on the cherry stones. 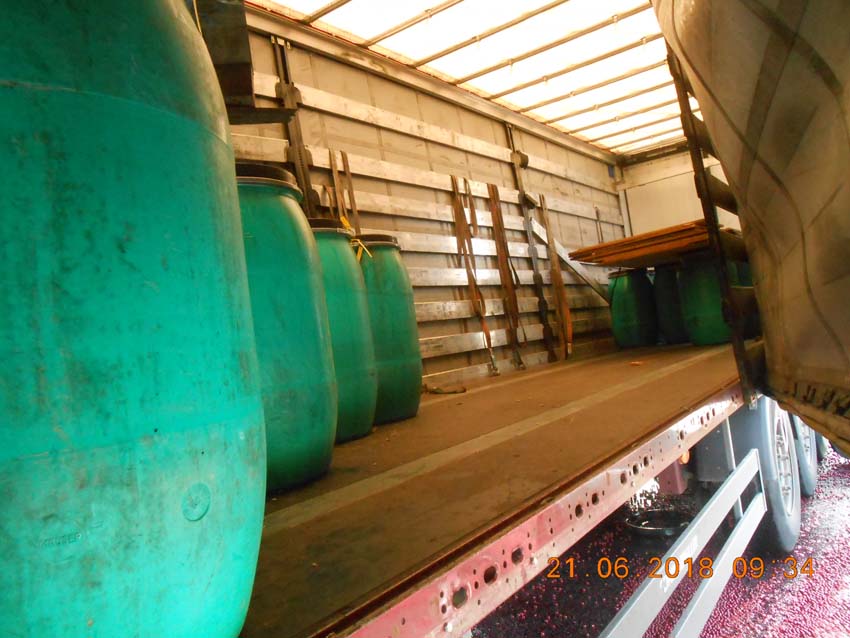 Quite probably, these drums full of cherries had gathered together to give themselves a sense of security, since they had none from any form of lashing or other securing equipment. Towards the back of the trailer, we can see drums that have clearly stayed put. There appear to be some boards of some kind on top of the drums, and they were probably lashed down in some way, but the pictures do not make this entirely clear. As we have already said, the other drums have made their way to the front of the vehicle or have fallen onto the road. The reason for this lies in the lousy level of friction between the plastic drums and the loading bed, combined with the total lack of load securing measures.

There are two issues to be overcome:

1. the poor level of friction provided by the drums and
2. the flexibility of the drums.

The poor level of friction can be mastered by the use of an adequate number of anti-slip mats or anti-slip strips. It is vital to ensure that each and every drum is fully isolated from the loading surface with respect to friction. This may well involve a considerable amount of effort, but it has to be done if the load is to be secured. We have seen an impressive demonstration of the tendency of these drums to slip and of how flexible they are, so we have to make sure that the good level of friction provided by the mats can actually do its job, which is only possible if the drums are prevented from tipping. There are a number of ways of doing this:

to stabilize them. These partitions can be further strengthened with belts. There is, of course, plenty of room for imagination here.

A neat "soldier stow" (with the drums aligned in tight lateral and longitudinal rows) with edge protectors and corresponding lashings can also help here. In this case, at least in some sections in the middle of the load, the middle drums should be lashed down, for instance using several pallets placed on top of the drums. If this is not done, the drums will start to tip from the middle of the load.

Your load securing columnists wish you a safe and secure journey this summer!