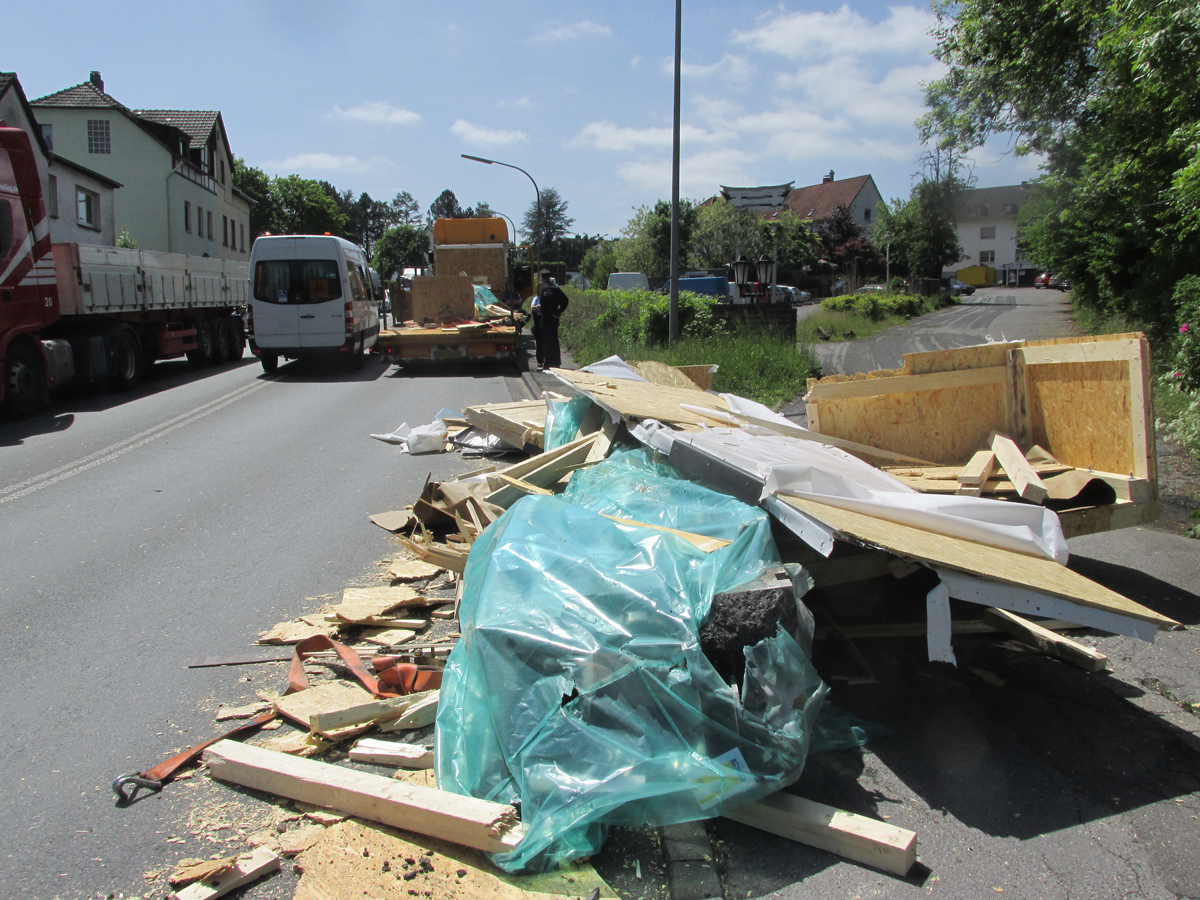 When we first saw Figure 1, we immediately thought that a garbage truck had lost its load. But a closer look made us think again. In the background, we can make out a vehicle with a similar load, which has also been trashed. And a glance back in the other direction reveals the "reason" for this load-securing incident: a left-hand bend. With good reason, loads have to be secured in such a way that they are able to withstand the stresses encountered under normal road conditions. And this includes negotiating bends, taking avoiding action and emergency braking. 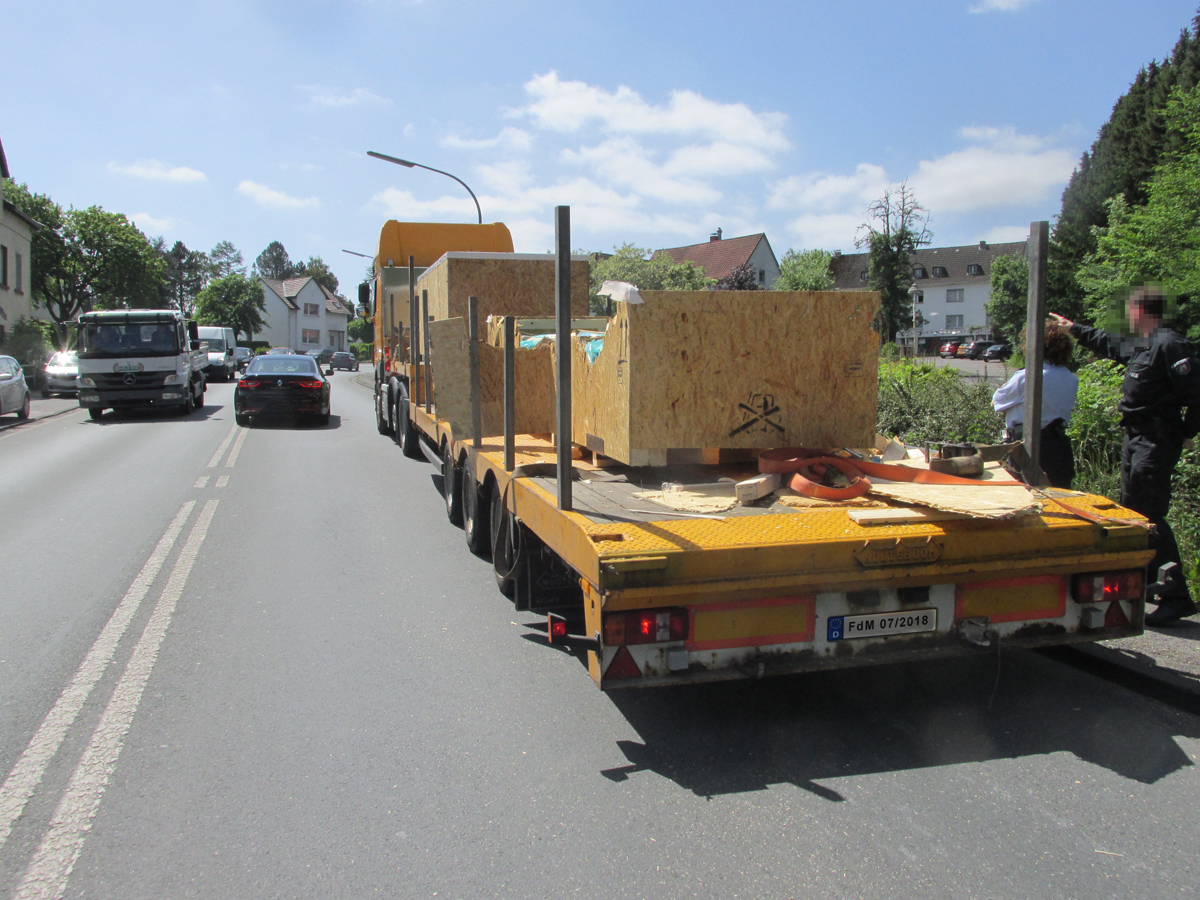 Figure 2 shows the vehicle standing on the right of the road and the situation has undoubtedly caused a few raised eyebrows among the police officers recording the incident. At the front, on the gooseneck, stands an undamaged and well-secured box. Or at least one would like to think so. Originally, 2 boxes, each weighing 8.5 tonnes, were stacked on top of each other on the lower loading bed behind the gooseneck. There was no tight fit either to the front or to the sides. In other words, these boxes were intended to be secured by friction. 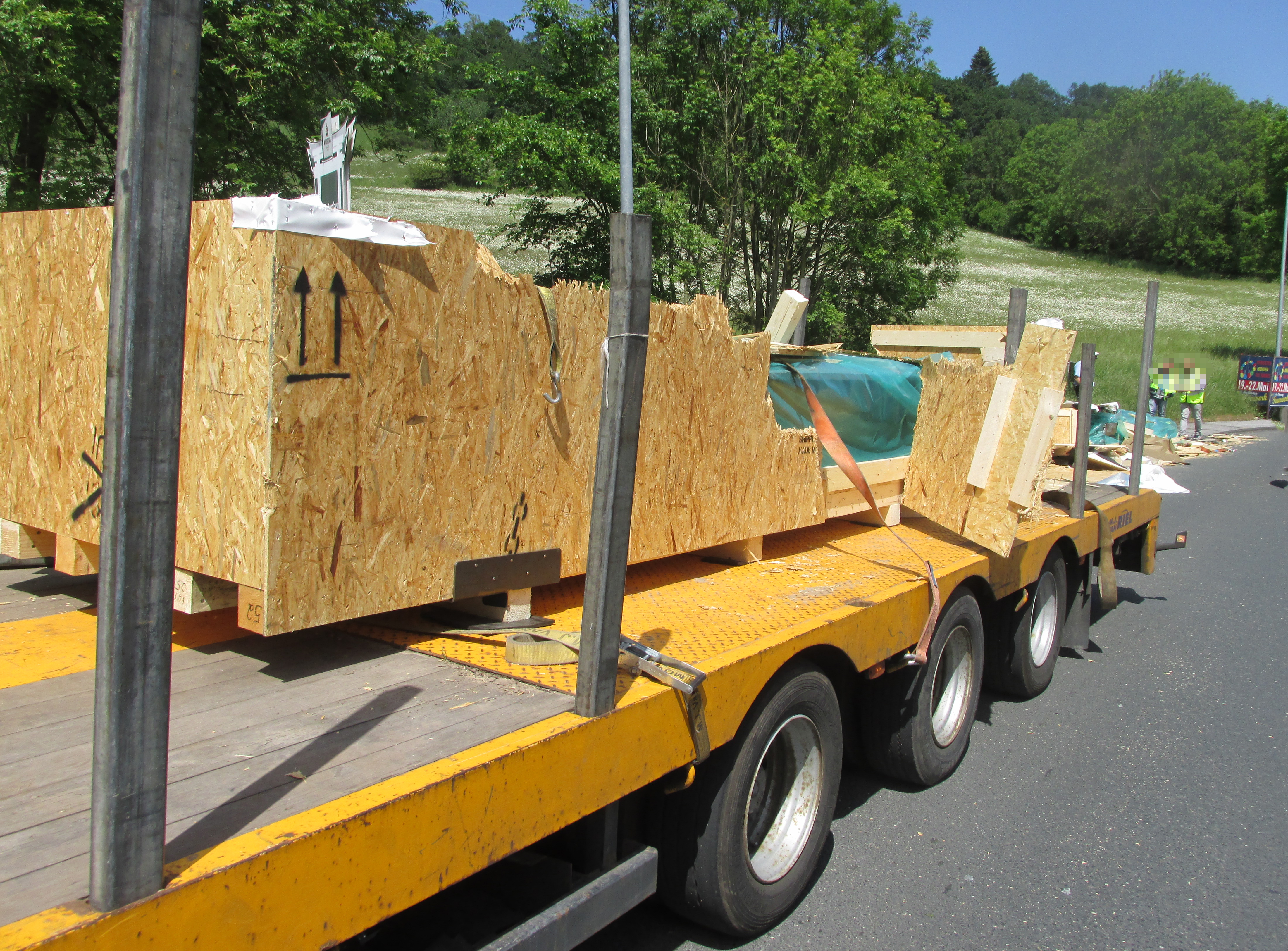 Consequently, anti-slip materials had been neatly placed under the box, probably by the driver; at least that seems to be the case. The boxes were lashed down with 3 belts. Since we can see both a ratchet handle and a loose end in Figure 3, one might assume that the belts had even been pre-tensioned on alternate sides. If we take a closer look at the box, we can make out a dent on the left front edge which could have been caused by a direct lashing around the front end of the box. This would complete the appearance of good, if unconventional, load securing. But this is pure speculation, because we see no sign of a belt that could have slipped off. 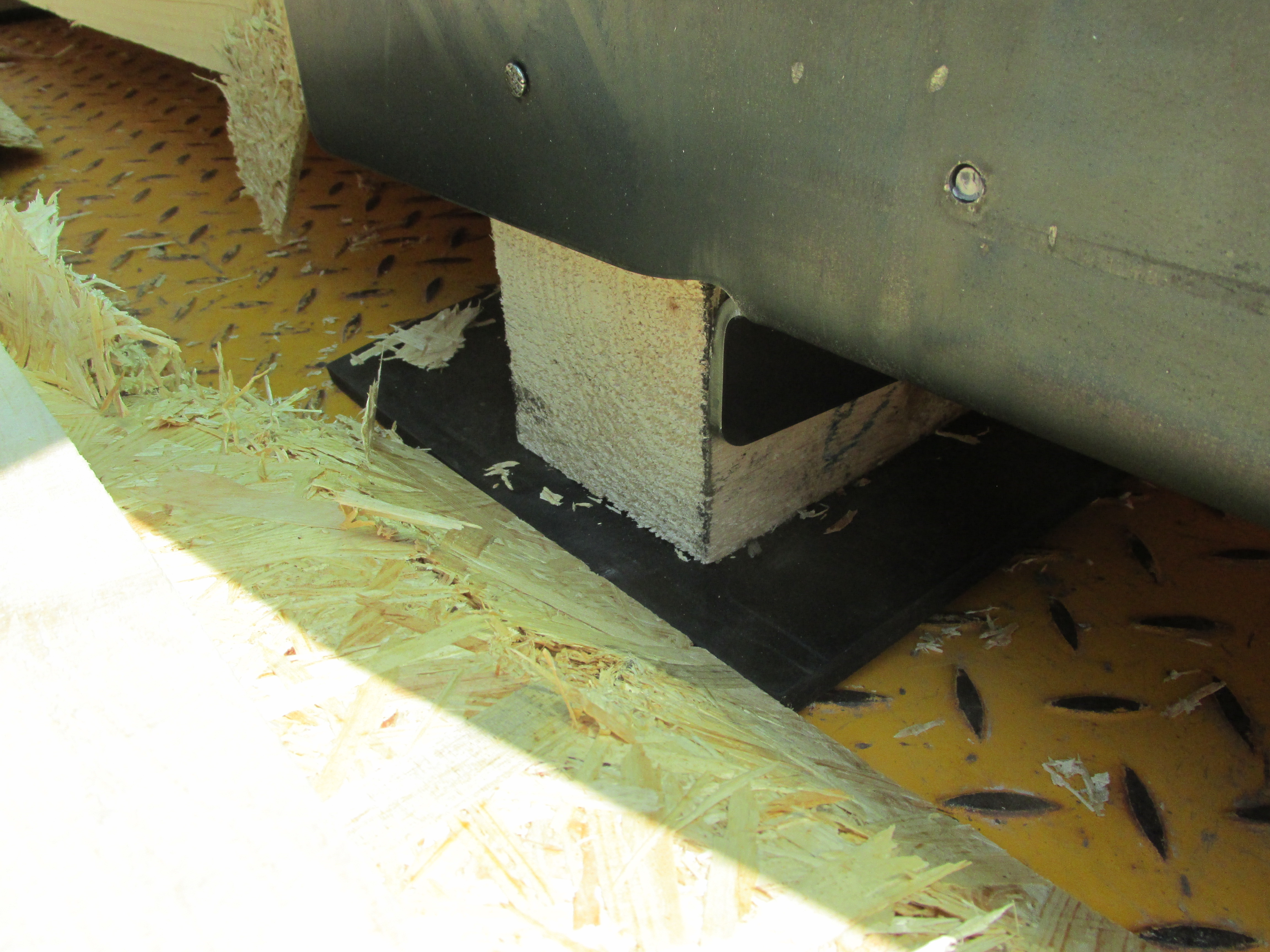 But it is a fact that there is sufficient anti-slip material in evidence and this material had also been placed under the box in such a way that the box was isolated from the loading bed in terms of friction. This is something we can clearly mark up as a positive. 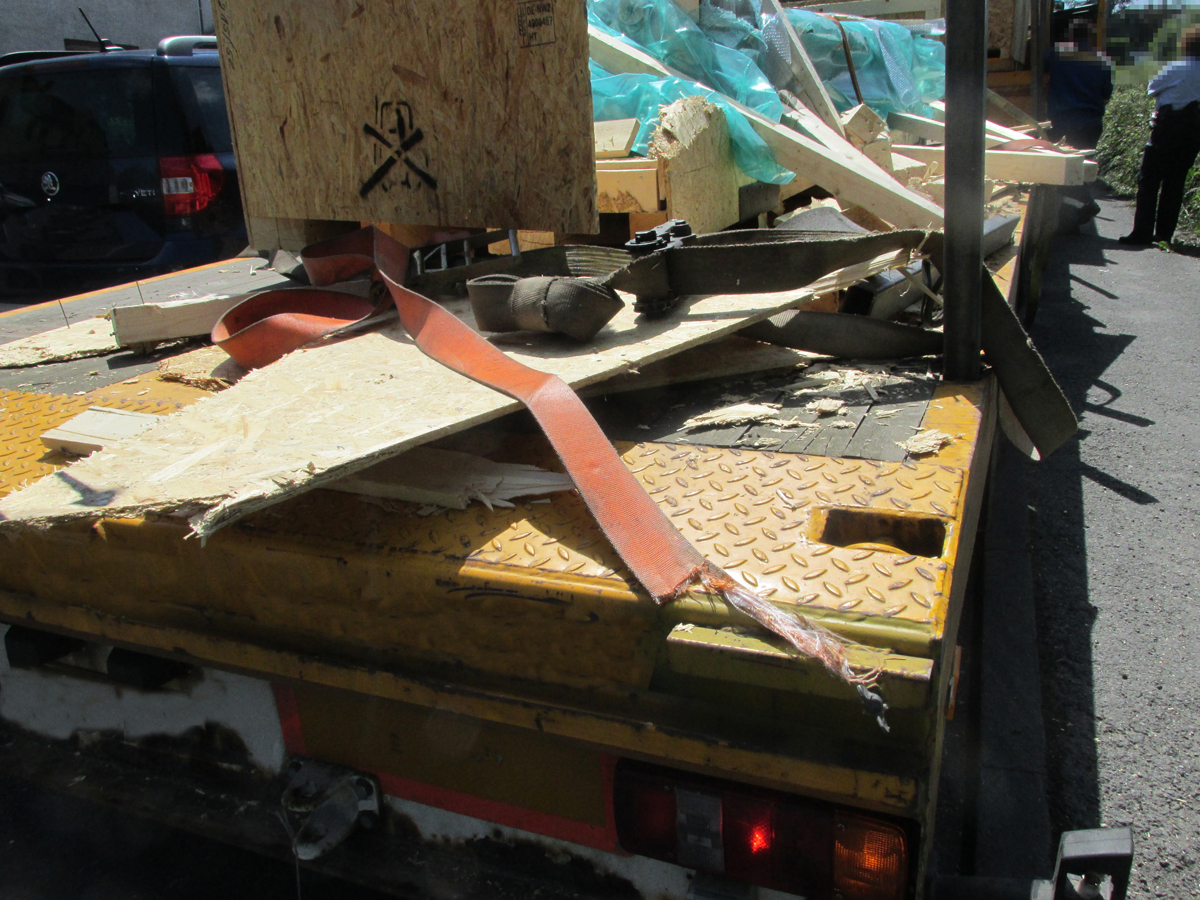 But there is still a mystery as to why this load was shed so spectacularly; why not only the box on the 2nd layer was almost completely destroyed, but also the box that remained on the vehicle. So let us have a look for any facts revealed to us from the photos. In the foreground of Figure 5 we see a torn belt which is obviously wider than the usual belts which exert 2,500 daN of securing force in a straight line. Unfortunately we do not know anything else about this belt. The box itself is made of OSB boards. This material is notorious for its sharp edges, and the "cut" on the belt indicates that the sharp edges of the OSB have really demonstrated what they can do. Conversely, of course, this means that no edge protectors of any kind were used, although they were urgently needed. The degree of destruction in this photo is surprising: Only the upper box actually slipped from the vehicle, and we cannot imagine why the lower box should have suffered so much damage. 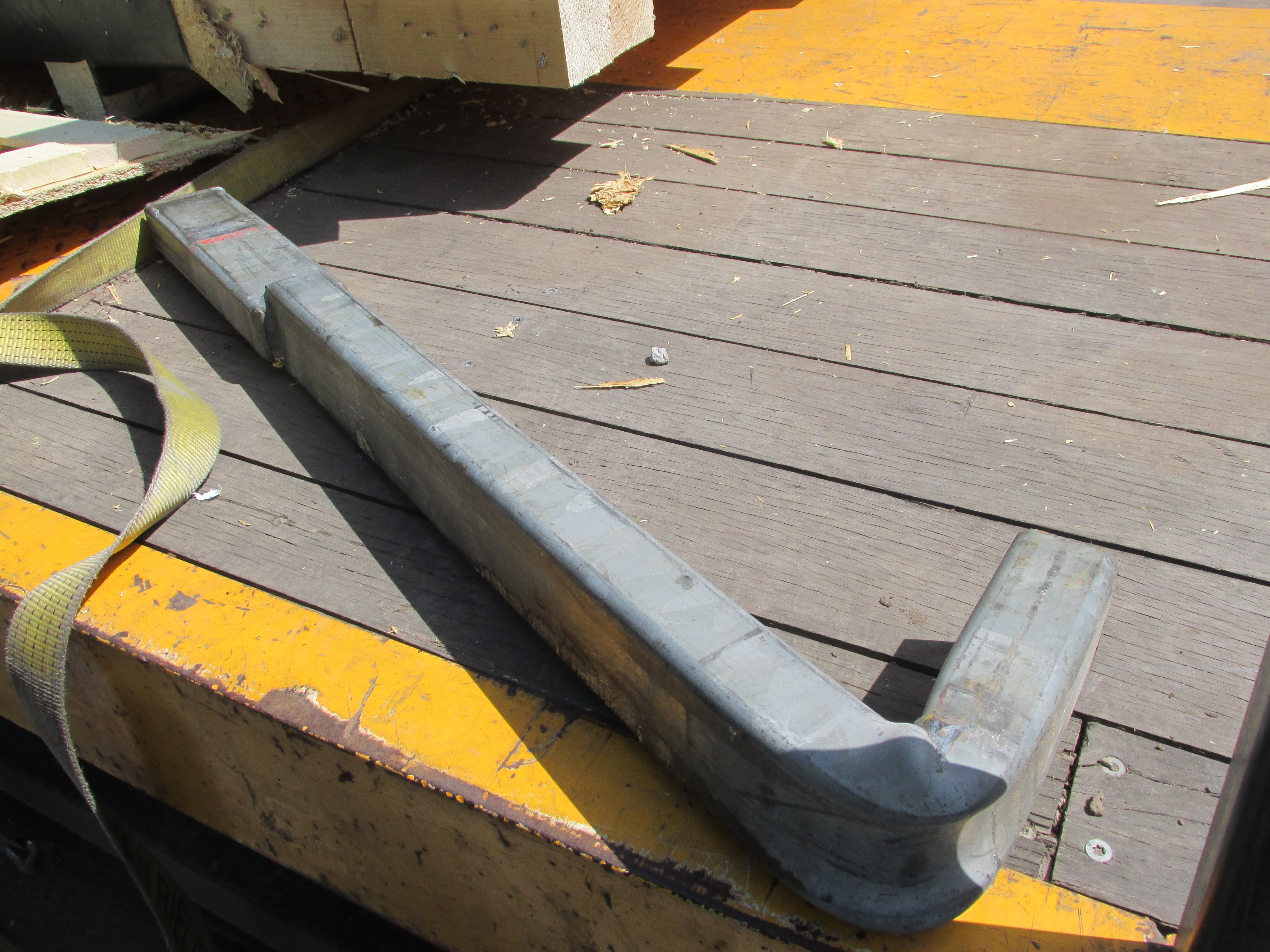 When we look at it again, Figure 6 is much more informative than the other photos. We can see a stanchion that has been bent through more than 90 °, as if it were plasticine. Another stanchion was simply torn away (see Figure 7). Substantial forces must have been at work here. Now we ask ourselves, given that the lower box was standing on anti-slip material in an exemplary fashion, what was between the lower and the upper boxes? Let's turn back to Figure 2. There we can see that the top of the boxes was neatly covered with plastic sheeting. This sheeting serves only to protect against rain and has been intentionally stapled to the sides of the box walls. From the perspective of box construction, this certainly makes a lot of sense. But why do we see the level of destruction that can also be seen in Figure 7? 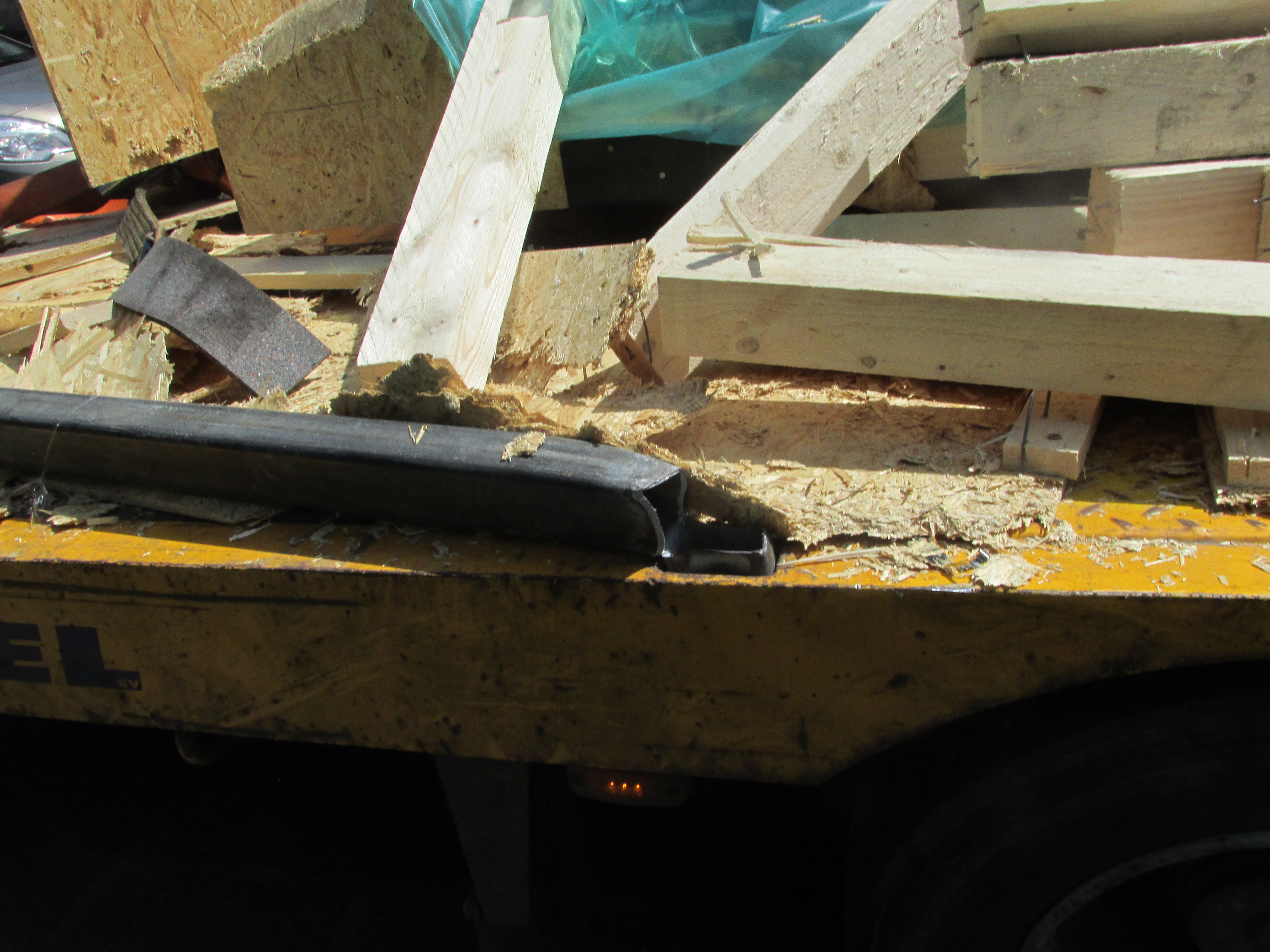 Here you can see the stanchion that has been torn off and another important detail: a part of an anti-slip mat. Since the lower box has been destroyed, but is still in place, this anti-slip material must have been under the upper box. This means that the upper box probably had anti-slip material under it just as the lower box did, in order to ensure that the tie-down lashing was adequate and effective at least in a lateral direction. Clearly, those responsible have forgotten to consider the friction between the plastic sheeting and the OSB board. Plastic sheeting is usually very smooth and OSB board is often at least as smooth. A few staples, which are only intended to prevent the sheeting from flying off in the wind, will not change this.

From a load-securing perspective, everything was actually done properly, at least in respect of securing to the sides. The only thing was that those responsible forgot to take into account the dreadful level of friction between the plastic sheeting and the OSB box lid. The fact that there was no bond between the sheeting and the box except for a coefficient of friction of probably less than 0.1 was completely ignored. This explains the extreme violence with which the upper box, with its 8.5 tonnes, ripped through straps, tore off or completely bent stanchions and seriously damaged the lower box. 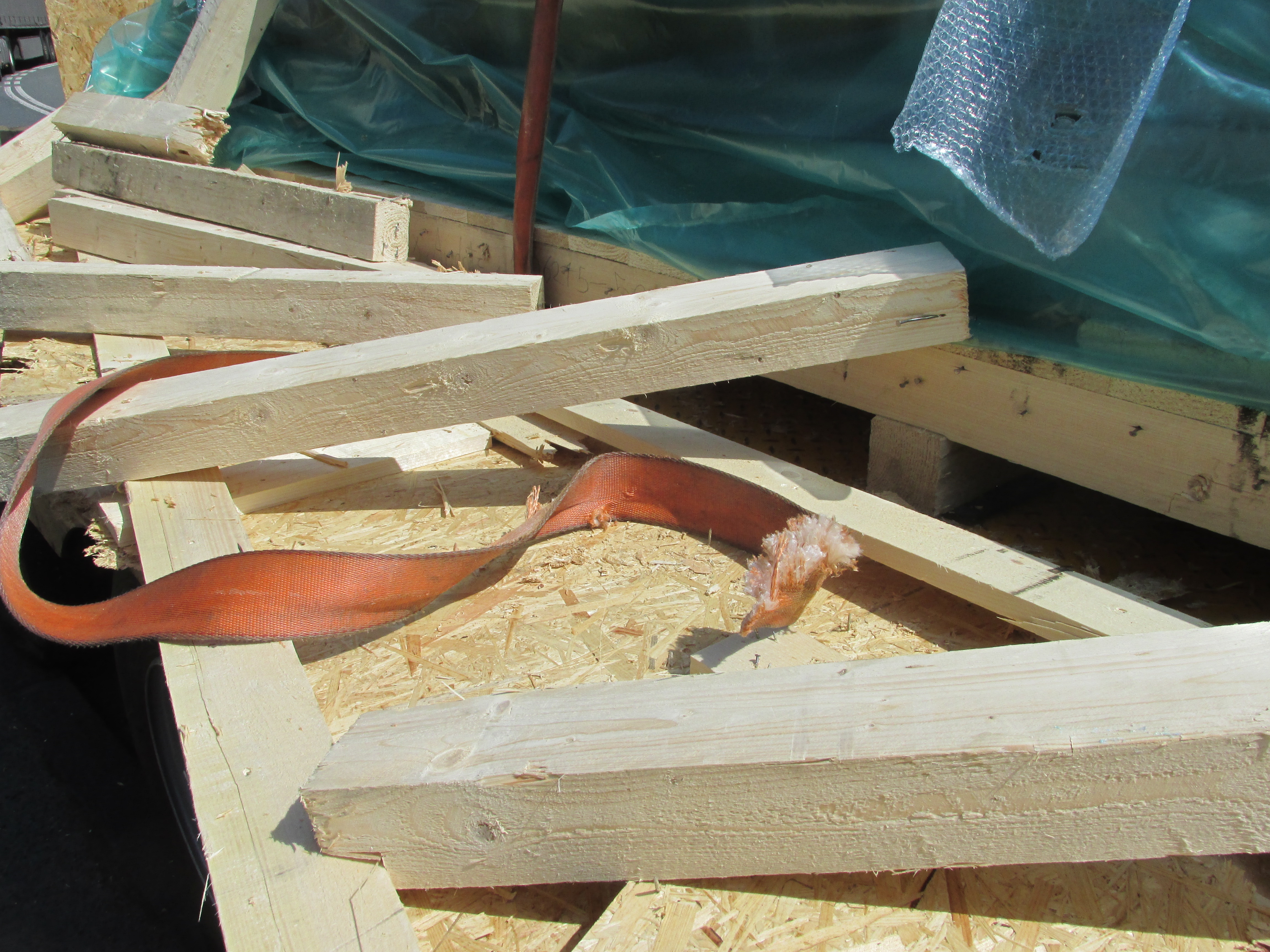 And this photo shows another tale of woe. A belt that has almost been cut in two and a lot of material that was used to build the box and now lies scattered across the vehicle. The question that crosses our mind is whether the box was actually all that well built? After all, the upper box did no more than slip off, albeit spectacularly. The lower the friction between the bottom of one box and the top of the other, the smaller the physical force acting on the lower box. That is a question that can no longer be answered as we try to interpret the pile of "trash" that is left over.

As always, we pose the question as to how a load like this could have been better secured. For a box weighing 8.5 tonnes, the good anti-slip material and 3 tie-down lashings would have been entirely adequate to secure the load to the side. We shall assume a coefficient of friction μ of 0.6, which means that there would have been a shortfall of 1700 daN of securing force to the front (which corresponds to a pre-tensioning force of about 2833 daN) for one box. Whether or not the belts actually delivered this pre-tensioning force is neither here nor there. We shall simply assume that this is the case on behalf of the loader and driver.

The second box stacked on top of the first is standing on the plastic sheeting, and may as well be on ice skates. There is virtually no friction, and even a pre-tensioning force of 20,000 daN would not have been sufficient. Provided the lower box was solid enough and assuming that the person who secured the load realized that the plastic sheeting had eliminated any friction, this person would, of course, have chosen the direct securing method. Two loop lashings from each side would have been perfectly sufficient to secure both boxes to the sides. Of course, anti-slip material under the lower box remains a very good idea. As we have already stated, the coefficient of friction for the material pair OSB board on plastic sheeting is effectively zero. The upper box must therefore be secured directly to the front and rear. Direct lashings can be taken crosswise around the ends of the box and attached as far to the front and back of the vehicle as possible. Of course, sufficient edge protection must also be used for direct securing, because direct securing can only generate its securing effect when the load slips a little.

Finally, who is to blame for this accident? The driver and the consignor! The consignor (probably the party who actually packaged the cargo) must know that the plastic sheeting virtually eliminates all friction, and common sense must tell the driver that this is so. So, both are to blame and we hope that the loader is also fined – not because we take any pleasure in another's misfortune, but because we hope that a fine will help to trigger a thought process in this company. After all, if a loader sends a load like this onto the roads, he is always complicit and also bears responsibility.