If it's round, it rolls 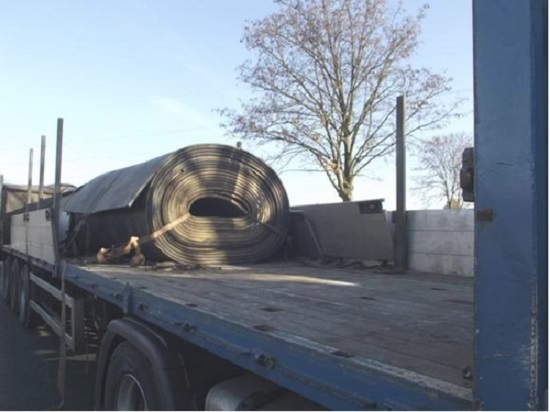 Figure 1 very strongly suggests that this vehicle was once carrying more than just the one rolled conveyor belt that we can see. 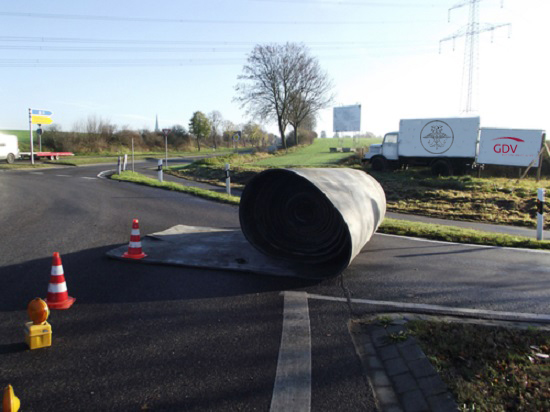 And our instinct is correct. If we look at the road onto the roundabout, we can see a rolled conveyor belt there, waiting to be picked up again. By chance, as is often the case, there is nobody underneath it and nobody was injured in the incident. The title of this Photo of the Month already tells us what the biggest problem was here: The sheer size and rather flattened shape of the load completely misled those responsible for the load: They simply forgot that these conveyor belts are still essentially round and have a tendency to roll. It makes very little difference that the rolls sag a little on the loading bed. They are probably subject only to rolling friction to the sides; after all, they will hardly make the effort of slipping in response to a lateral acceleration when it is far easier to simply follow the laws of physics and roll. And, as this photo clearly shows, one of the rolls managed to do so. 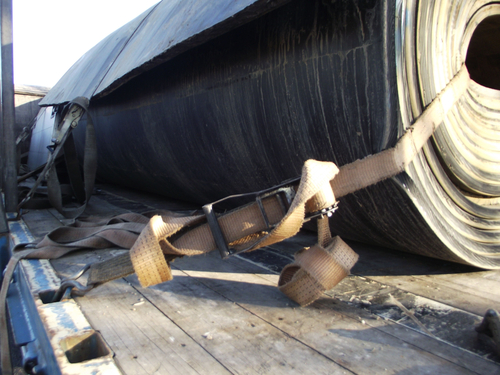 Figure 3 shows how one of the conveyor belt rolls is "secured". The shape of the load is nice and round and it is secured with direct lashings, which is what we would normally want. We cannot quite work out what purpose the tie-down lashing is intended to serve. It is probably simply there to prevent the outer layer of the conveyor belt from flapping up and protruding over the edge of the vehicle. We would not expect this tie-down lashing to provide any securing effect, as the roll can move freely (roll) underneath the belt. Only when the roll is at the point of falling from the vehicle does the tie-down lashing begin to act as a direct lashing. But in this event, the dynamic forces involved mean that the lashing can no longer restrain the load, so there is simply no securing effect.

Let us take a look at the direct lashing: in this case, a loop lashing. The belt has been passed right through the eye of the roll and both ends secured to the same side of the vehicle. The material that makes up the load is rubber. It is fiber-reinforced, as one would expect, is relatively heavy (approx. 5 t), but also has the excellent coefficient of friction of rubber. Even when using a direct lashing, it makes sense if the ends of the lashing belt are pre-tensioned. If this is done, a jolt or any incipient movement of the load cannot cause the load to slip or roll into a loose belt. Instead, the belt has to stretch to take up the strain of the movement, and this causes it to generate the full securing effect. In this particular case, we fear that the pre-tensioning force was distributed extremely unevenly, since the photo shows that there is considerable friction on the load-securing material and the pre-tensioning force on the other side will probably be dreadful. And we can indeed see this clearly in Figure 7a.

The vehicle was negotiating the roundabout and had to brake relatively hard to respond to a traffic situation. This caused the load to be accelerated relative to the vehicle, not just forwards, but also to the side. Because the belts were clearly in a dreadful condition (as can be seen in this photo), the belt on the left-hand side of the vehicle failed first. The roll was then free to move towards the front right side wall and crushed it, together with the central stanchion and ripped it from its anchorage (Figures 4 and 5). Then, of course, the belt on the right-hand side of the vehicle failed as well. 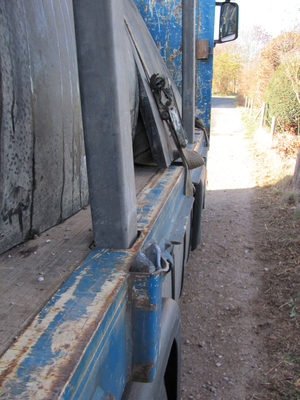 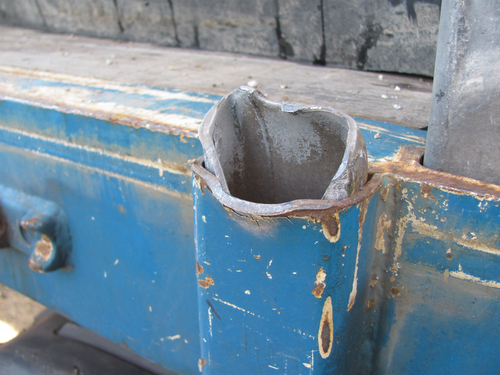 Although it is true that direct lashings only generate their full securing effect when they are stretched, the belts must absolutely not be loose, otherwise the load will jolt into the load-securing material. And none of the materials, whether they be belts, wires or chains, are made to withstand such forces. Once a load has started moving, it cannot be restrained by any stanchion or belt, in particular if it is not subject to any friction and is happily rolling along. 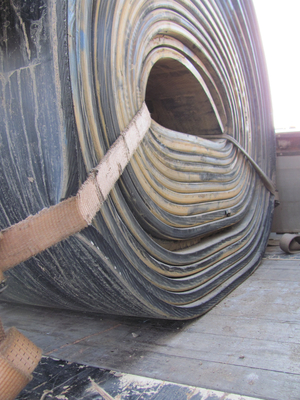 Even if the load is somewhat oval in shape, as can be seen here, it will roll if it moves to the side. This photo also again shows the dreadful state of the belts and furthermore that they were pinched as they passed through the eye of the roll. If we have a close look at the loading surface, we can see rather a lot of small pebbles. We are unaware of whether these caused the load to slip forwards. Unfortunately, we also have no information as to whether there are any longitudinal skid marks on the loading surface or whether the load only rolled. 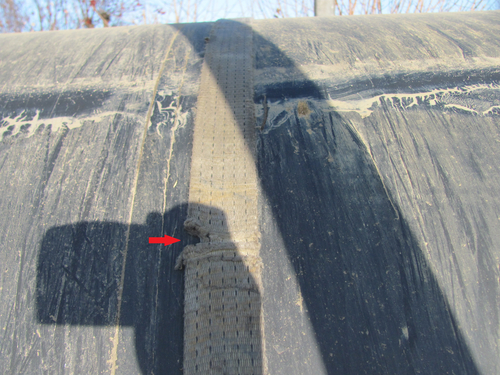 Figure 7 leaves no doubt that some of the belts were in a frightful condition, but also that this one, which was used as a tie-down lashing, is fit for scrapping. But the story does not end there. Figure 7a not only shows a twisted belt that has nothing like the pretensioning force of the opposite end of the belt, but also a belt hook that has been bent open. For us, this is evidence that this load-securing material has already been subjected to excessive loads in the past. 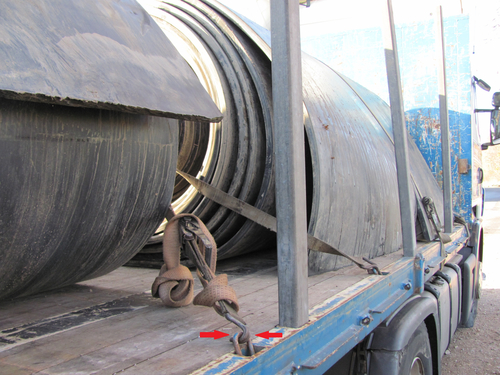 Any time that an item of load-securing equipment is subjected to an excessive load, it must be replaced in its entirety, as it is difficult or impossible for an external inspection to reveal the extent of any damage suffered by the complete set of equipment, which is made up of the ratchet handle, the belt and the hook. 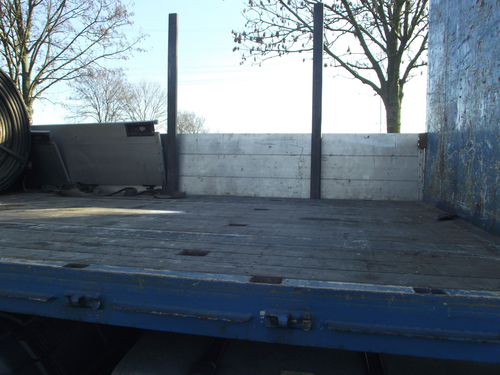 So what is the correct way of securing a load like this?

Figure 8 shows that the vehicle is fitted with several stanchion sockets, which are also distributed laterally across the loading bed. It may be that the stanchions are strong enough to secure the rolls as a tight fit between them if they are used. In the case of 5-tonne rolls like these, the two stanchions must be capable of withstanding forces of 2500 daN to the sides at a height of approximately 80 cm to 1 m above the loading surface (depending on the diameter of the roll). If the manufacturer is not able to guarantee this (as indicated in the stanchion diagrams), we are left with good old direct lashings, as shown in these photos.

The belt material should be as new, and not in a dreadful condition, of course. Edge protectors should be placed at the edges to allow the pre-tensioning force to be distributed evenly over both ends. If the shape of the load makes this securing method too complicated (passing the belt through the eye of the roll), it would also make sense to transport these rolls on rectangular wooden dunnage. As we have said repeatedly, it makes eminent sense to cover both sides of the dunnage with anti-slip material in this case as well. The rectangular dunnage lifts the load a little and thus allows a loop lashing to be placed around the entire load.

The pre-tensioning force is distributed more efficiently over the periphery of the load, the belt is not kinked and does not run at a sharp angle and it can generate its full securing force as soon as the load begins to roll.

We need 4 belts per roll. But because these belts can be laid out over the loading bed before the rolls are loaded and then simply thrown back over the load when it is in place, this securing method would probably take less time than the fiddly work of passing the belts through the eyes of the rolls. As we can see here, they are twisted and sometimes pinched. They are also pre-tensioned to very different forces.

Another advantage of using loop lashings to the sides and around the periphery of the rolls is that the rolls can be loaded as a tight fit to the end wall, as it is not necessary to access the eyes of the rolls.

But if the space between the individual rolls is needed, for instance to allow them to be craned, a further loop lashing is required to secure the load to the front. With this material, this can be done diagonally across the end face. If the rolls are aligned, a board can be placed through the eyes of both rolls to prevent the belt from slipping off. This makes it easier to secure the load in the direction of travel.

Your load securing columnists as always wish you a safe and pleasant journey!