Dead wood or death by wood?

There is no need to worry, readers. Nothing worse has happened here than that some logs have illegally made their way onto the road. 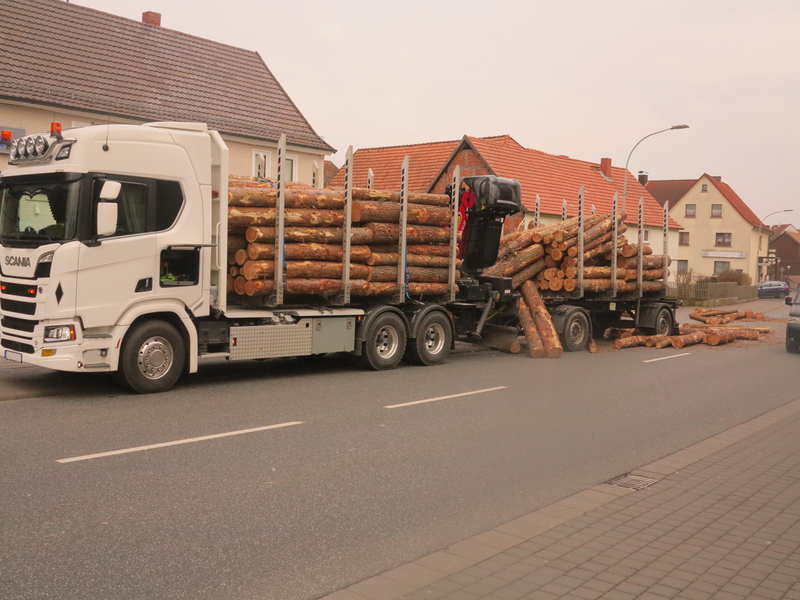 The load on the vehicle comprised 3-meter pine and spruce logs loaded in two blocks on both the truck and the trailer. The traffic situation caused the driver to carry out emergency braking, which in turn caused the load on the truck and the trailer to slip forwards. The load slipped forwards primarily from the top, middle part of the blocks. This behavior can often be observed with logs. The loss of the load spread a considerable amount of debris over the road, which would need to be cleaned up. Just looking at the pictures sends a shiver down one's spine: If the lumber had slipped into a group of people waiting at a bus stop or into the path of oncoming traffic, the consequences would have been dire. But in the end, it was just a good day out for the rubbernecks and provided us with yet another example of the fact that the laws of physics make no exceptions. 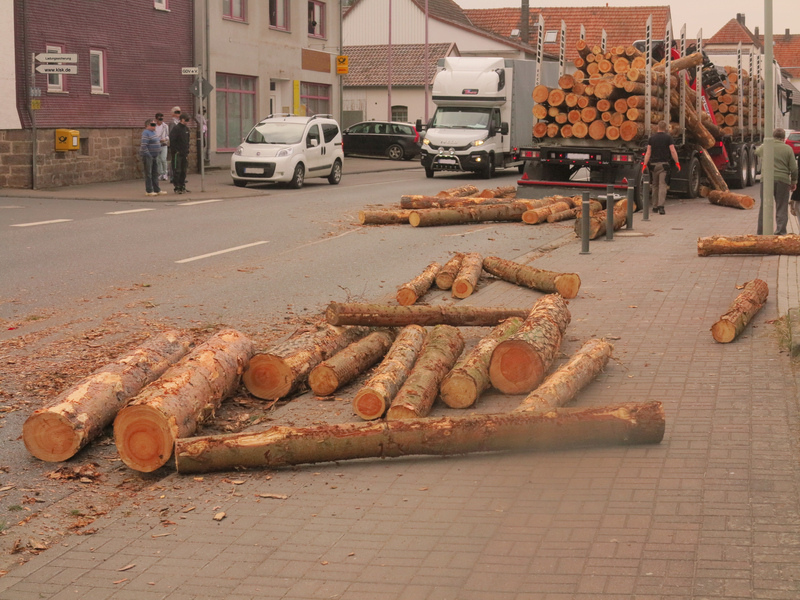 And this was more than enough reason for us to have a closer look at this incident. After all, the potential danger was massive. As always, the important thing is not the speed at which the vehicle was traveling when the driver started braking, but rather the intensity of the negative acceleration, i.e. of the braking itself.

We can already hear the comments: Lumber is special; you can't compare it with other loads. That's true, but only to a certain extent, as even a load of lumber will experience acceleration relative to the vehicle when the vehicle brakes. And the consequences can be drastic, as this incident again demonstrates. But there are real differences: Logs are partially secured as a tight fit, friction is not of the usual magnitude, and the "bilge and cantline" way in which the logs are stowed means that the stanchions also have a securing function, not only laterally, but also longitudinally.

In 2005 and 2006, the following organizations thoroughly investigated the issue of securing logs in order to take proper account of the peculiarities of this cargo.

Read the official German report here (in German only).

Extensive trials with different kinds of lumber in the rough have provided entirely new insights. Instead of using simple friction values for calculation purposes, reduction values were determined that took account of the fact that cylindrical objects stowed "bilge and cantline" fashion not only generate friction, but also wedge together, with the forces shown in blue generating additional securing effects. 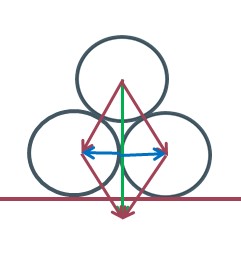 The trials demonstrated that a tight fit of the logs to the toothed rails play a significant role in securing the load. The fact that the logs are effectively wedged between the stanchions also has a positive effect. The empirical trials that were carried out meant that all these effects and interrelationships were taken into account, as it was possible to analyze the effects of all the securing factors. These analyses formed the basis for the joint recommendations of the organizations listed above.

One of the issues identified during the trials was that individual logs can become loose in cavities in stacks of logs up to 4 m in length. These can then slip forwards when the vehicle brakes. This is the reason why the recommendations call for an end wall or some other measure (e.g. a net) to restrain individual logs of up to 4 m in length. Because the logs being transported in this example are three meters in length, measures of this kind would have been necessary. The tractor unit illustrates the efficacy of an end wall. Unfortunately, we have no photograph of the truck/trailer combination from the side. We can therefore only assume that the logs are hard up against the end wall and that no damage was done.

If we look at the table showing examples for securing a load with a tight fit from the loading recommendations, we can see that given a stack weight of 6 tonnes and pine logs with a length of 3 m, at least two tie-down lashings would have been required. But they weren't there! Instead, the two belts that were there for appearance's sake (one for each stack on the trailer) ?failed, and there was nothing to stop the load spilling onto the road. We know nothing about how well the belts had been tensioned or whether the load had settled and the belts had become loose as a result. Neither do we know whether the load had been compressed by the log grab during loading, nor whether the logs had been loaded with a crown to allow the pre-tensioning force to be transmitted evenly to the load. The only thing we know is that whatever was done was not sufficient. Our assumption is that the load settled, which allowed the belts to become loose so that there was nothing to stop the load from slipping. The slipping load took the belts with it, which tensioned them and tore them apart. A belt that becomes tensioned as a load slips is unable to restrain the load once the process is underway.

The trials that led to the joint recommendations showed how important it is for each layer of the load to be compressed with the log grab during loading. This artificially forces the load to settle and it is pressed between the stanchions. It cannot then settle as much during transport, and the pre-tensioning force in the belts is retained. Of course, the belts still have to be pre-tensioned. There are also auto-tensioning systems available specially for the load-securing systems on logging trucks. It is not hard to guess why. The logs must be loaded with a crown so that the belts make contact right across the top of the load, allowing it to be secured properly.

We are of the opinion that an end wall is always a reliable way of offering safety to the driver and other road users. Belts are still needed, but the table shows that not a great deal of effort is required to prevent logs from becoming deadly missiles.