The dangers of roundabouts 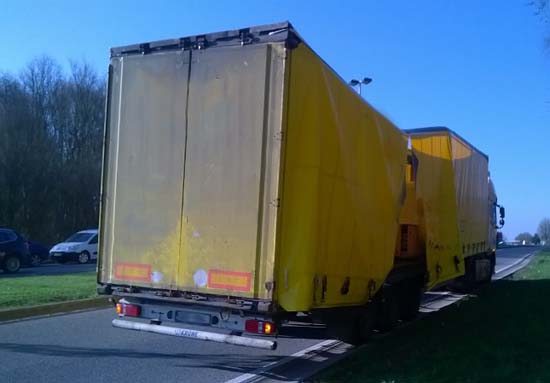 After this magnificent yellow vehicle had passed the first of two roundabouts, the driver looked in his wing mirror only to notice that the tarpaulin seemed a little out of shape. 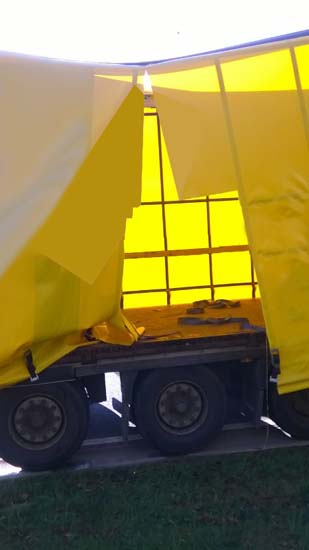 Being an assiduous type, he immediately pulled over and thoroughly checked his vehicle. There were clear signs that the load had managed to make its escape. The tarpaulin had clearly been wantonly destroyed, and the signs were that load-securing belts had simply been torn apart by brute force. There was no doubt about it: This load, which had made its bid for freedom, must simply have been malevolent. 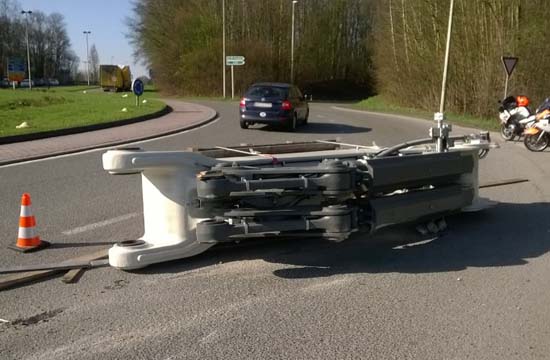 As soon as the driver had established that the load had escaped, he set off to hunt it down. And there it was, barely 100 meters up the road, just lying in the dangerous roundabout. Its escape from the truck had not done it a great deal of good, as it was recaptured immediately. The police were kind enough to provide some red and white cones to secure off the area around the load, and from this point on they kept a careful watch on the load to nip any further escape attempts in the bud. 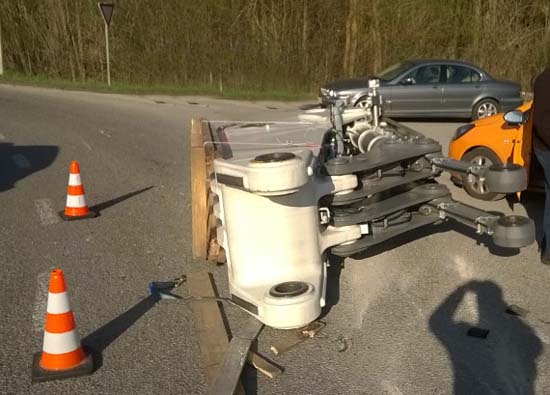 And here we can see the load in all its glory. It is clearly a hydraulic component of some kind, perhaps part of the boom of a large excavator. Made of solid steel and weighing several tonnes, it was "secured" to a pallet with plastic straps. 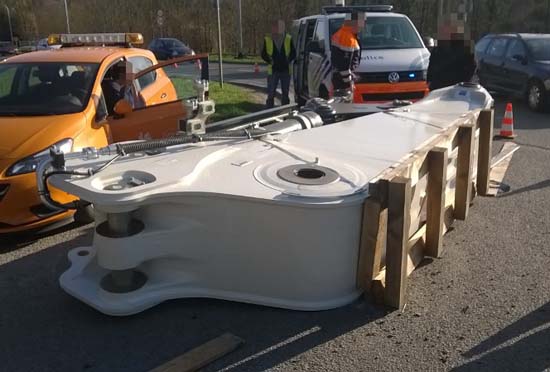 Figure 5 gives the best impression of the solidity with which this component was built.

Regular readers of our column will have noticed that we found it difficult to maintain a due sense of seriousness. A steel component weighing several tonnes was "secured" with two tie-down lashings. Some blue objects were found on the loading bed. These may have been intended as edge protectors because somebody was concerned about the paintwork of the lovely steel component. 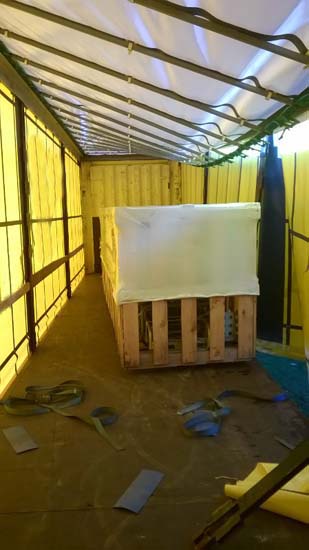 The loader and driver frankly "didn't give a damn" – if you will pardon the expression – about securing the load, or, it would appear, about road safety in any form. The crate that we can see here on the loading bed, and which has slipped to the right, was filled with several tonnes of machine components. And your eyes do not deceive you. We also were unable to discover any attempt to secure the load, whether it be anti-slip material or belts of any description. So both parts of the load, the crate and the steel boom, weighing several tonnes, were resting on lumber. Friction is proportional to the weight, which means that both parts of the load should have ended up on the road. The reason why the crate is still on board the truck may well be the collapsible stanchion or the two collapsible stanchions against which the crate was able to find some support. The two stanchions have already been pulled from the roof structure, but at the bottom, they were together able to offer sufficient resistance to the crate that it remained on board.

So why are roundabouts dangerous?

The answer is quite simple. The vehicle is constantly changing direction. It is driving round in a circle and the load is subject to high lateral forces relative to the vehicle, since the load tries to maintain its speed and, in particular, its direction. Of course, this is not dangerous if the load is secured properly. But it is most certainly dangerous if people have been so thoughtless and irresponsible as to leave the load unsecured or dreadfully secured as we see in this example. Even if the steel component had been secured properly, this vehicle would have suffered enormous damage, since the crate most certainly slipped to the right and clearly did considerable damage to the two stanchions on the right of the vehicle.

So how can a load like this be secured properly? That's quite simple:

1. To start with, we need anti-slip mats under both parts of the load in order to get the friction as high as possible. Then two loop lashings are used on each side, which takes care of securing the load to the sides.

2. Because the securing force to the front will probably still be insufficient, we would, of course, recommend a loop lashing here as well. And that is all that is needed. The minimum securing force is provided by loop lashings, which allow us to rely on the high level of friction provided by the anti-slip material.

And the whole operation would take perhaps 20 minutes. As it is, this vehicle represented a deadly hazard on the roads, which fortunately only resulted in the destruction of the vehicle superstructure and a large dent in the asphalt. We don't think it takes much to imagine the disaster that this accident might have become.

Your load securing columnists as always wish you well secured loads and a safe journey!