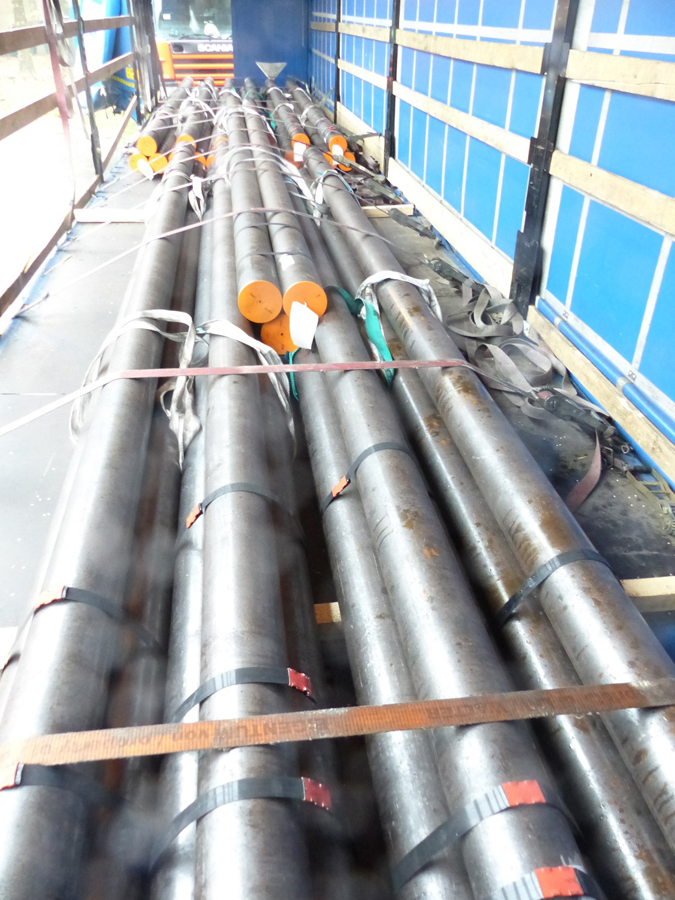 Don't worry! We are not going to write about transporting fish here. German dock workers have for years used the magnificently evocative expression "Speckaale" (which means something like "greased eels") to refer to the difficulties in handling oiled pipes. They are extremely slippery and difficult to deal with, as they can easily slide off a forklift truck or from slinging gear. Which means that extra precautions and extreme care must be taken when handling them. And, of course, the same applies when securing them as a load, which brings us to our favorite topic. Here we have a complete load of steel pipes which clearly have thick walls, since the small number of pipes we can see on this trailer weigh in at a total of 25.6 tonnes. It was not possible to determine the precise number of tie-down lashings used. But we estimate that 10 – 12 tie-down lashings were used in total. The pipes are bundled together in 3s with steel straps. We do not know whether the white slings we can see are lifting slings that were left in place around the pipes to facilitate handling. 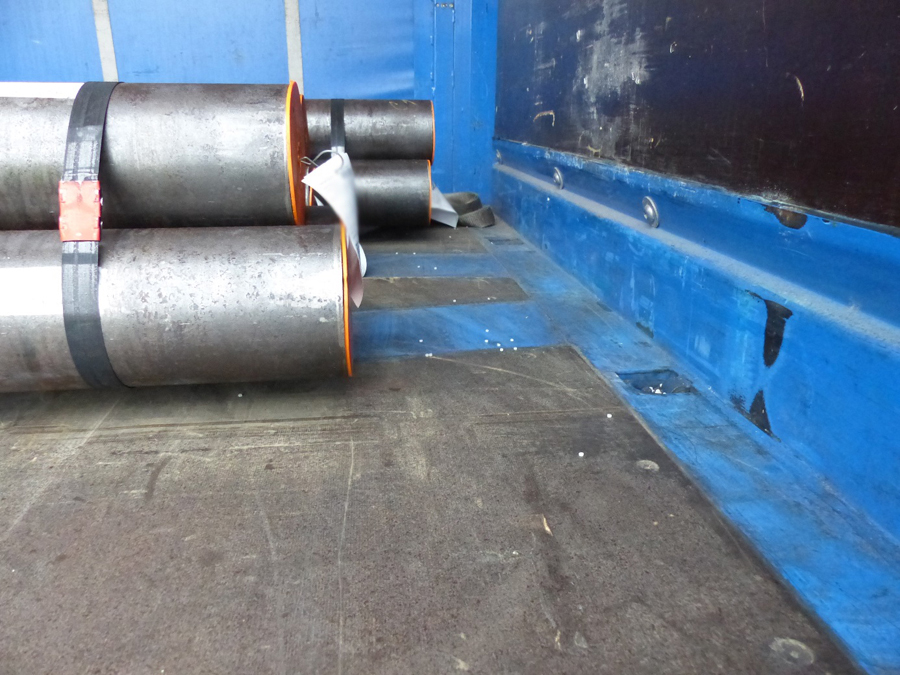 In Figure 2, we can see the gap to the end wall that has become so familiar to us over the years. In some ways, there is not a great deal to say about this load, since it is once again stereotypical for all the mistakes that can be made: 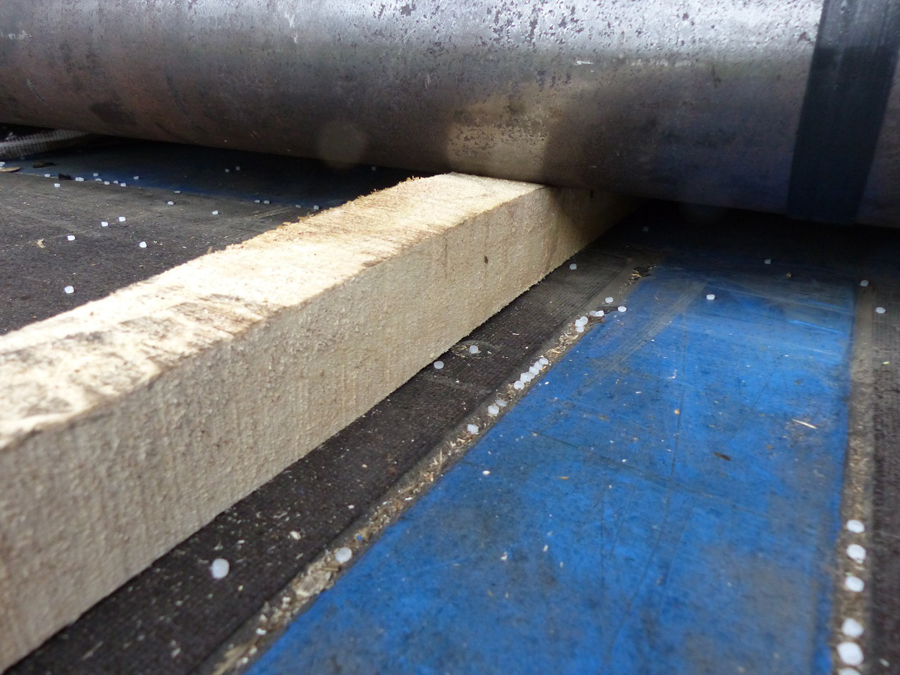 Because this load is so stereotypically poor, it is unsurprising to find that dunnage with a square cross-section has been used rather than dunnage with a rectangular cross-section. Figure 3 has a special treat in store, namely the myriad white dots on the loading surface. These white dots are plastic granulate, which are about as useful during load securing as a can of dried peas in a cartoon. A simple broom can work wonders here, and its absence can be catastrophic. If the broom is not used, even more friction is lost. But perhaps the loaders thought to themselves "if the friction I have between oiled steel and rough-sawn lumber is already so bad, then I really don't need to sweep the loading surface; after all, the friction between the lumber and the oiled steel is far worse anyway." 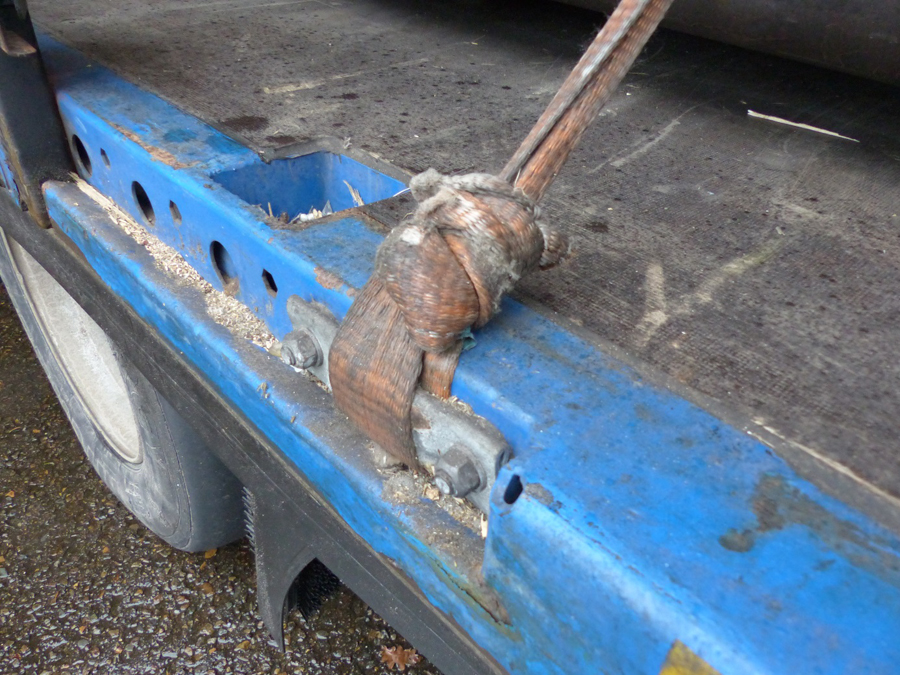 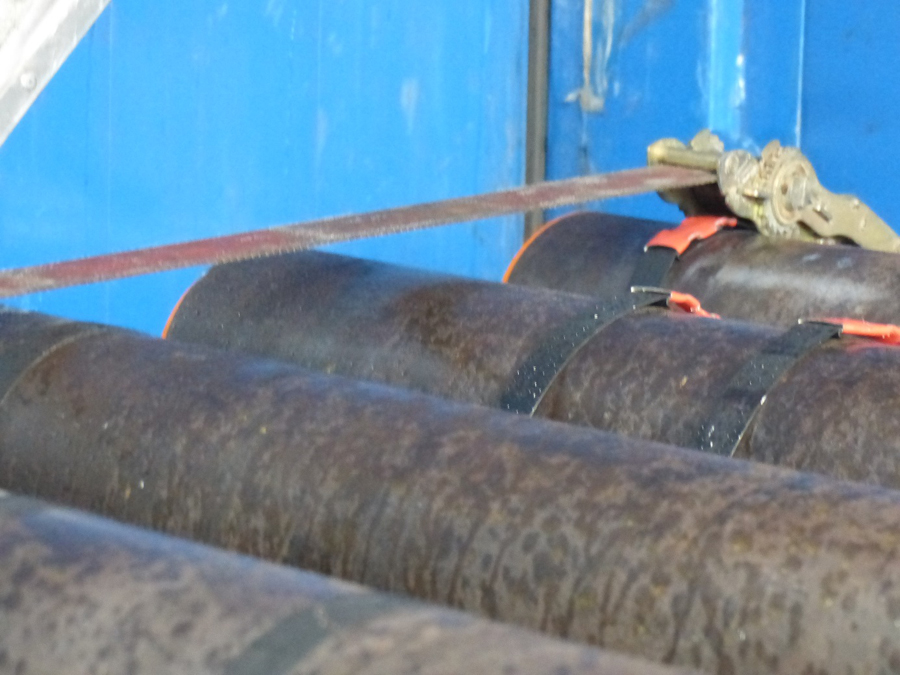 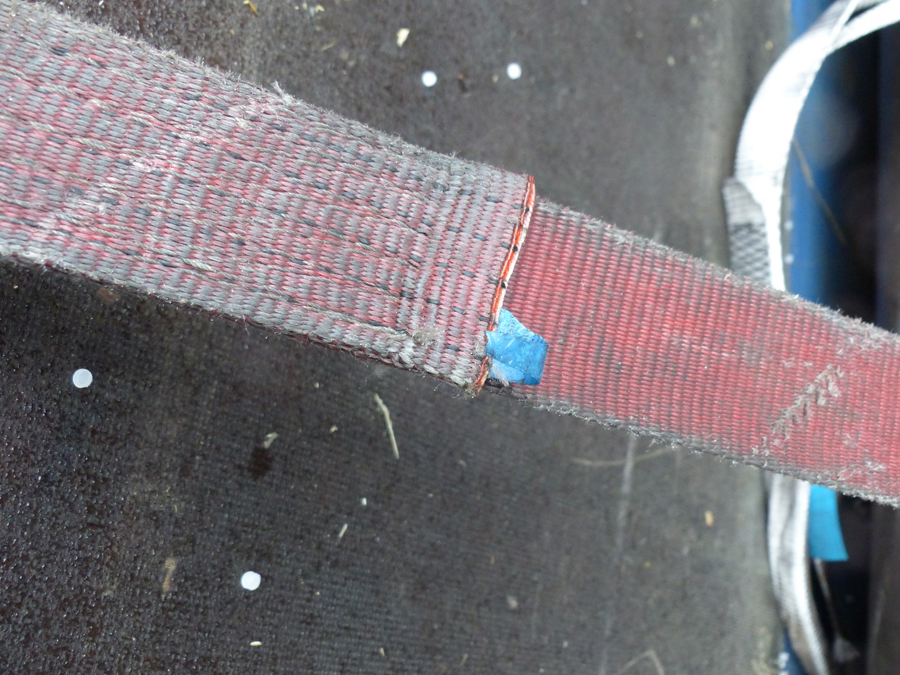 And the stereotypes keep on giving: It appears that the vehicle is often used to transport steel, and the load-securing material is accordingly in a condition that will raise a few eyebrows. Hooks that have been sheared off have been replaced by the creative use of knots, as can be seen in Figure 4. Figure 4a shows a ratchet handle that has been attached in such a way that it will bend when under load. And Figure 4b shows us that this belt must have had a label at some time, which, one assumes, would have provided information on the lashing capacity of the belt. Incidentally, we can also see signs of a cut here, which raises the question of whether this belt is fit for purpose at all. The belts were found to be damaged in a number of places, but several tensioners were also found with damaged or broken handles. 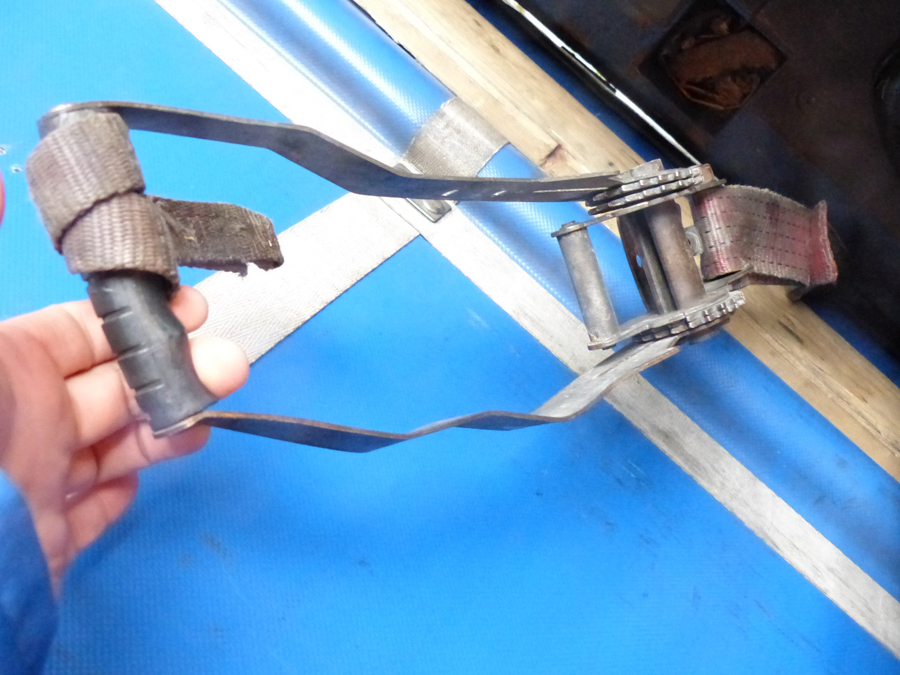 So how can a load like this be secured properly?

We shall start by sweeping the loading bed until every last trace of white granulate has been removed and disposed of properly. Then we shall get ourselves some rectangular cross-section dunnage, and we shall cover the top and bottom of this with anti-slip material. We shall cover the end wall generously with thick planks or squared lumber to "protect" it from the load of steel pipes. This also distributes the load properly over the end wall. The pipes are then loaded hard up against the end wall to provide a tight fit. Before we started loading the vehicle, we checked the load capacity of the end wall: 5000 daN or 13,500 daN. The bundles of pipes that were loaded at the rear of the vehicle are loaded hard up against the load that is in front of them. If this is not done, it is necessary to construct an artificial end wall, which is a relatively complex undertaking.
This could, for instance, comprise 4 – 5 pieces of squared lumber stacked on top of each other. After the pipes have been loaded as a tight fit against this wall, it must be restrained in at least 2 places using symmetrical loop lashings. To allow this, the squared lumber is placed on unused lumber of the same height as the rectangular dunnage and placed lengthwise in order to allow the belts to be passed under the artificial end wall.

Of course, vehicles that are specially equipped for transporting steel are ideal for transporting loads like this. Such equipment can include sockets for stanchions, which allow the carrier to be flexible in handling a variety of loads. In this particular case, a row of such stanchions could be inserted to create an artificial end wall.

As far as securing the load is concerned, we of course recommend loop lashings. On the one hand, these ensure that the load is well secured to the sides, and on the other, they provide exactly the same tie-down effect as the employed tie-down lashings that we can see in the photos. To secure the bundle of pipes that was loaded on top, we would either use direct lashings or, provided that considerations of load distribution permit this, we would place it alongside the other pipes and also load it as a tight fit against the end wall. If the end wall does not provide adequate securing capacity, the planks used to distribute the load will additionally need to be restrained with loop lashings.

As always, securing a load is not some kind of a black art. All it needs is a little logical thought and the inherent "intelligence" of the load securing material. And this intelligence is manifested when the equipment is used directly. The effect of tie-down lashings comes almost exclusively from the pre-tensioning force, and this in turn comes from the muscle-power of the users. It seems to us that it is better to make use of the strength of the material itself, which could avoid a potential disaster.