That all looks pretty good 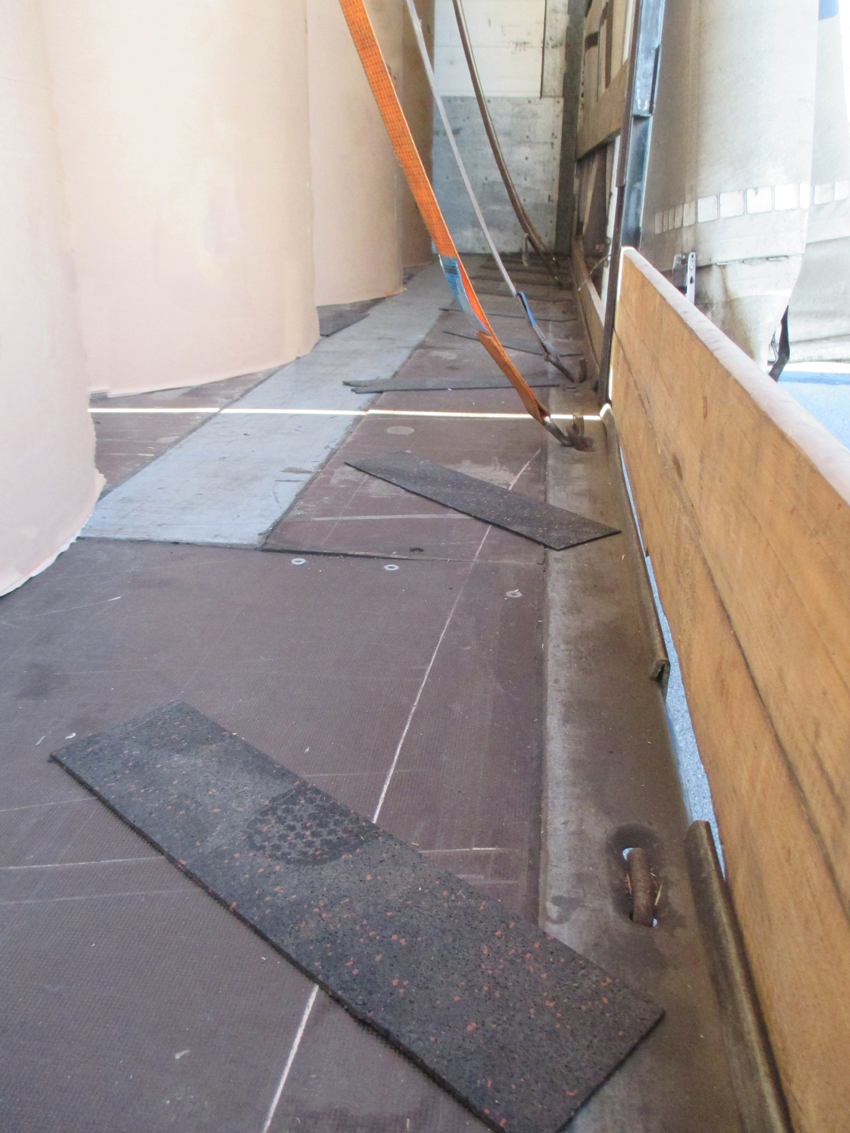 When police officers inspected this vehicle, their first impression was that it all looked pretty good. But that was nothing more than a fleeting impression. They happened to notice how well the belts were tensioned – they weren't. And it got even better: Some of the belts had simply been laid over the paper rolls, and edge protection had placed in textbook fashion. But what about a ratchet handle for tensioning the belts? They looked in vain!

It looks as if the driver or the loader, whose job includes securing the load, were "disturbed" while doing just that. The curtain was then immediately closed and the loading bay was vacated as a matter of urgency. Perhaps the driver and the loader in charge suddenly experienced selective and temporary load-securing dementia.

But seriously, what are we supposed to think of a load in this state? It has an air of cost pressure about it, for instance:

It cannot and must not be the case that an articulated truck with a trailer full of paper – weighing in at 23.9 tonnes – is allowed, or maybe we should say "forced" onto the roads with the load completely unsecured. Anyone who, in their role as a loader, permits something like this will be among those to appear in court in the event of loss or damage – and rightly so! And the local officials were on their toes and immediately brought the loader responsible to account. At the end of the day there was a fine for the driver, undoubtedly accompanied by 1 point on his driving license. The person responsible at the loading bay also went home with an extra point on his license.

Let's go back to Figure 1. Two anti-slip mats are provided on each side for each roll: exactly as things should be. Originally, these were intended to be placed under the rolls before they were loaded in such a way as to effectively isolate the rolls from the loading surface in the friction chain. On none of the pictures provided to us were we able to see that even a single one of the anti-slip mats had actually been used. 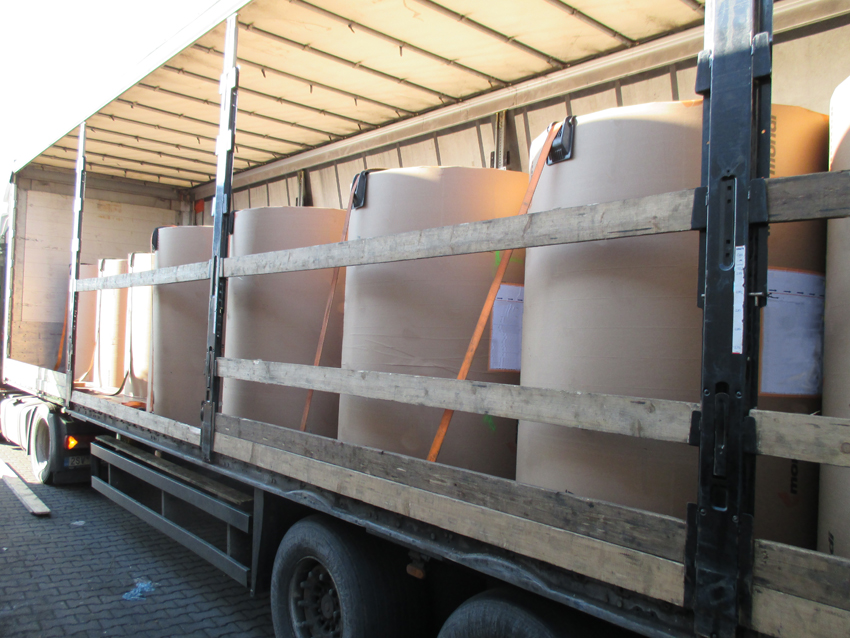 In the interests of fairness, we would like to say that we also found two belts that had clearly already been tightened. This is another indication that something has cropped up in the middle of the job of securing the load, and this led the driver and loader to act so irresponsibly. 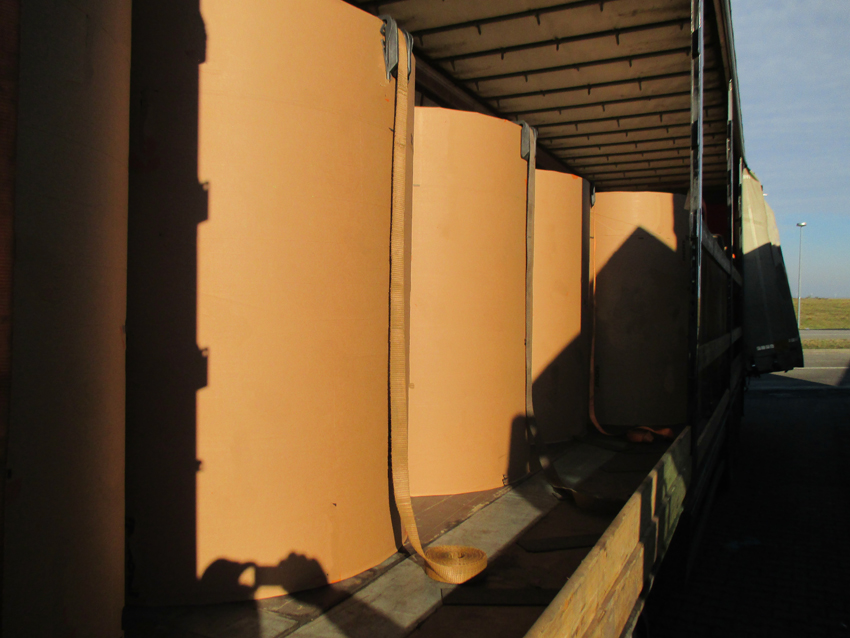 Even though this picture is disastrous in terms of its photographic merits, it shows that the belts are neatly laid over the paper roll, the edge protector is placed where it will be effective and the rolled-up end of the belt is still waiting for its ratchet handle. Clearly, the belt waited in vain, as the ratchet handle failed to arrive before the load departed. 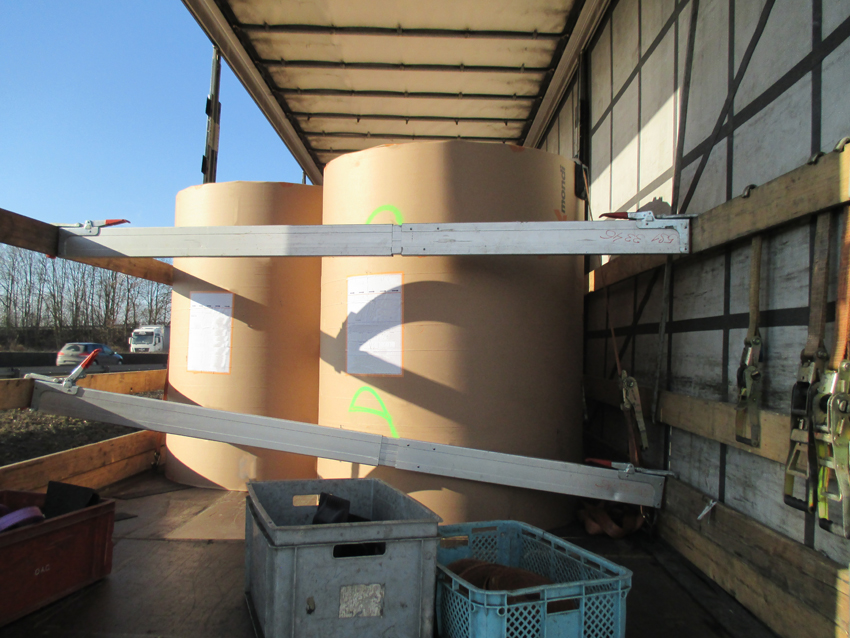 Figure 4 shows the load from behind. We cannot fathom out why the last two rolls were loaded off-line. After all, it has been proven that rolls which have been loaded in a line in "soldier stow" can also be effectively restrained by the end wall if they are sensibly secured. On the right side of the vehicle there are some ratchet handles looking rather sorry for themselves, as they were clearly never used. And it is not only the ratchet handles that are sorry. The cargo planks, which are holding the side boards together in a rather fetching manner, one horizontal and one somewhat inclined, were probably only in the way and were simply "tidied up" like this. From a load-securing perspective, they are useless where they are, simply hanging in mid-air. Even if these cargo planks had been pushed right up against the rolls of paper, their securing effect would have been negligible. As far as we see it, it could barely be calculated. The reasons for this are:

Here too, we can only say how dumbfounded we are that a loader could let a vehicle leave the premises in this state. Of course, we hope the driver was not put under time pressure while he was securing the load. We would like to give the driver the following advice at this point: If it was indeed the case that he was effectively ushered from the loading bay onto the road, he has to make good the load-securing measures without delay. The fact that something like this can actually happen somewhere saddens us as load-securing columnists at this, the start of a year. We can only hope that such a total lack of conscience will soon be a thing of the past.

Your load-securing columnists wish you all safe driving and a healthy and happy New Year!