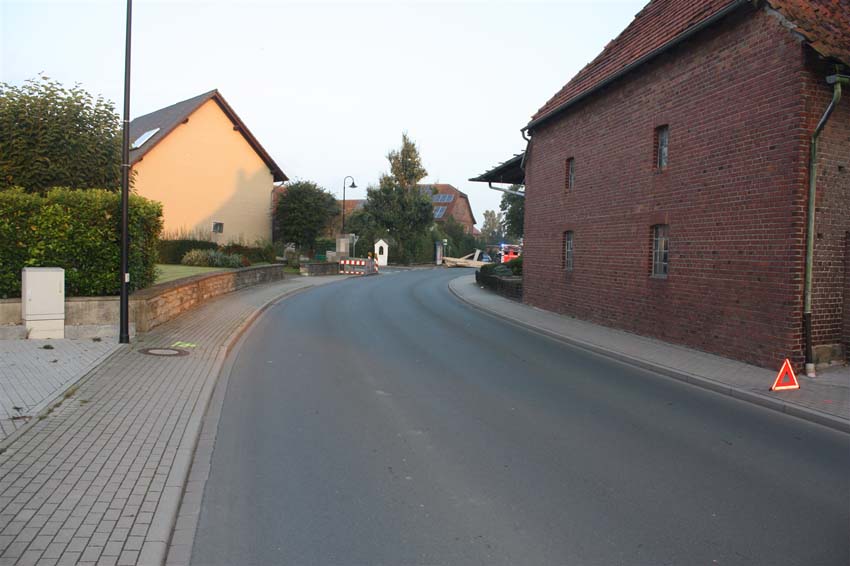 Our first photo shows a harmless bend to the right. Apart from the warning triangle that can be seen to the right of the road and part of a load in the background, there is nothing of particular note here. 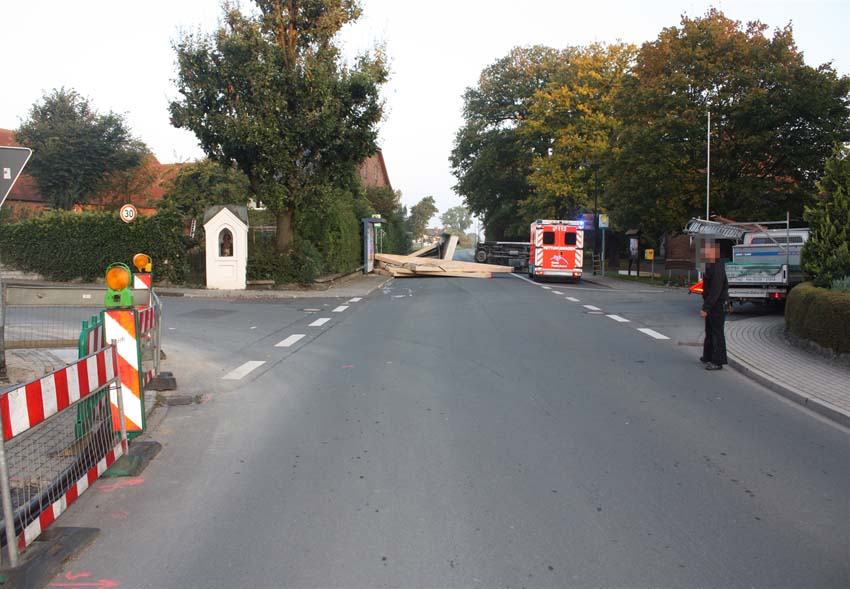 And it came to pass that a van with a 6 m trailer rounded this bend. The results can be clearly seen in Figure 2. The trailer's load slid through a bus stop where, just 10 minutes previously, several children had been waiting for the bus. Thank goodness the bus arrived and picked up the children before the accident happened. And so no people were hurt in the accident. Perhaps not entirely without consequences: The van driver for one will at least have taken a few knocks when it happened. So what happened? 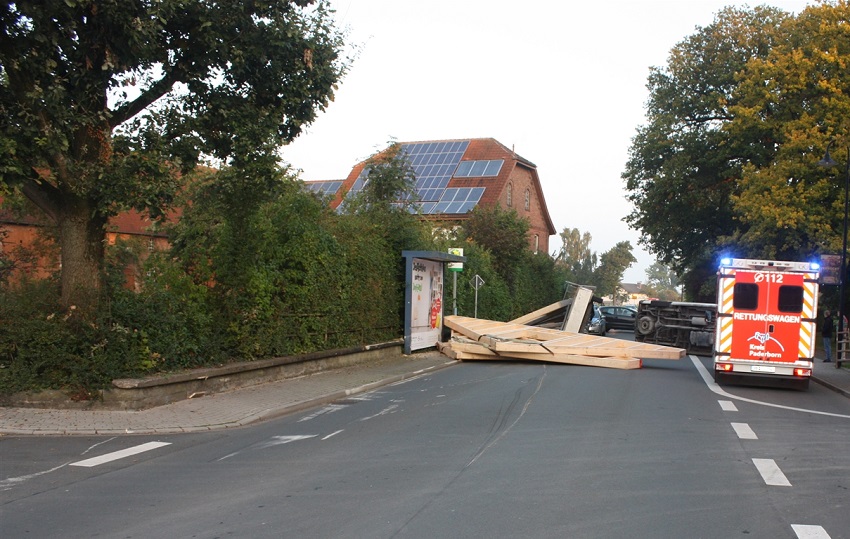 The vehicle probably rounded the bend at a speed that is normal for the location. The trailer probably started snaking so quickly that the driver had no chance to get it under control. The trailer rolled over to the left. As already mentioned, it shed its load in the direction of the bus stop. Together, the trailer and its load slid all the way from the beginning of the crossroads to behind the bus stop and, to cap it all, the trailer also forced the towing vehicle to roll over. 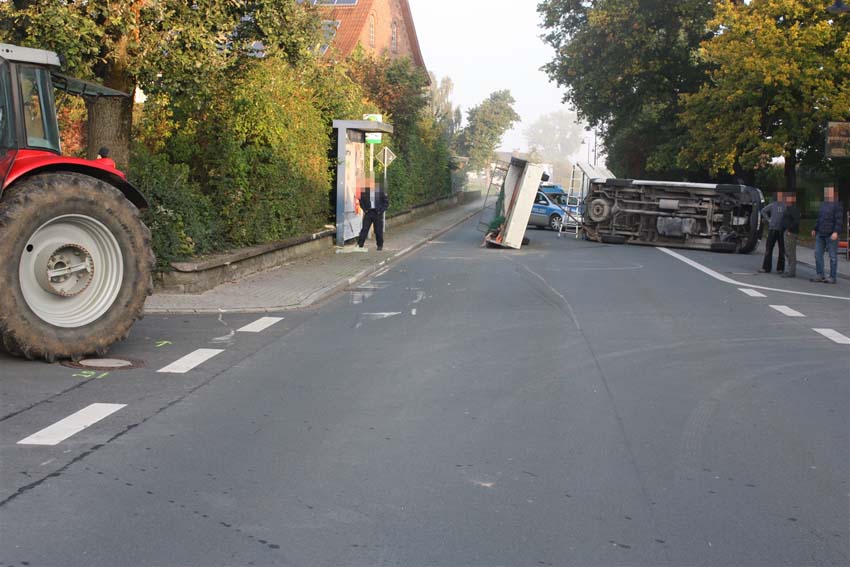 The load, consisting of wall and gable elements of a timber house, made contact with the ground at the beginning of the crossroads and collided heavily with the 40-cm high wall shortly before the bus stop. The scoring and scratch marks on the road and on the curb show that a considerable amount of physical force was expended. 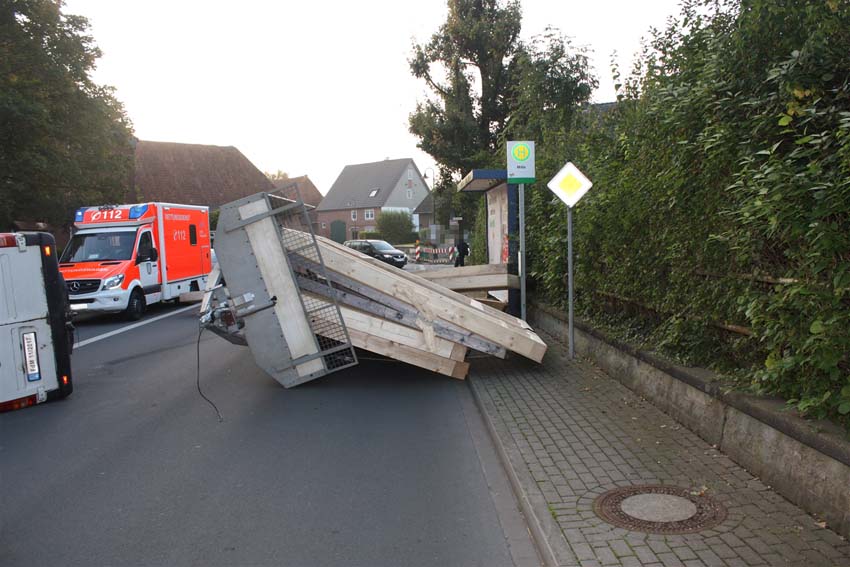 In Figure 5, we can see the trailer loaded with the wall and gable elements lying on its side.

An attempt at analyzing the accident:

The load had been loaded upright against an A-frame on the trailer. The A-frame was not secured to the trailer. There were no anti-slip materials under the A-frame or the load, and the load was lashed down with several belts. Since we can no longer tell from the available material whether there was a tight fit to the front and that everything was well thought out and well secured, we shall this month restrict our comments to an analysis of the cause of the accident. We think that it is extremely probable that the trailer had started to snake. This can happen if the trailer is loaded asymmetrically. The higher the center of gravity and, in particular, the further the center of gravity of the load is shifted to the rear, the more disastrous the effects will be on the handling of the vehicle and its trailer. At this point, we would like to take the liberty of offering you 3 links, each of which impressively convey how sensitively trailers react to uneven load distribution. In particular if the overall center of gravity of the load is located well to the rear of the axle or axles, the trailer can start to snake quite spontaneously. The critical point may have been the cornering maneuver, because, as you can see in the video clips, an external stimulus may sometimes be required. This can then become multiplied.

And so, our advice this month is aimed not only at drivers of vans or cars with trailers, but also, of course, at truck drivers with semitrailers and large truck-trailer combinations: It is simply that they should secure their loads according to the load distribution plan. Provided it is in perfect technical condition, a trailer whose load is distributed over the trailer as low and evenly as possible will follow the path of the towing vehicle cleanly.

In the case in hand, this would mean that we would have to calculate very accurately what weight is loaded at what point on the trailer. And if the load projects too far beyond the end of the trailer, it should be loaded as a separate consignment so that its center of gravity can be positioned in the middle of the trailer. If these conditions cannot be met, it is absolutely necessary to find a different vehicle.