No disaster this time! 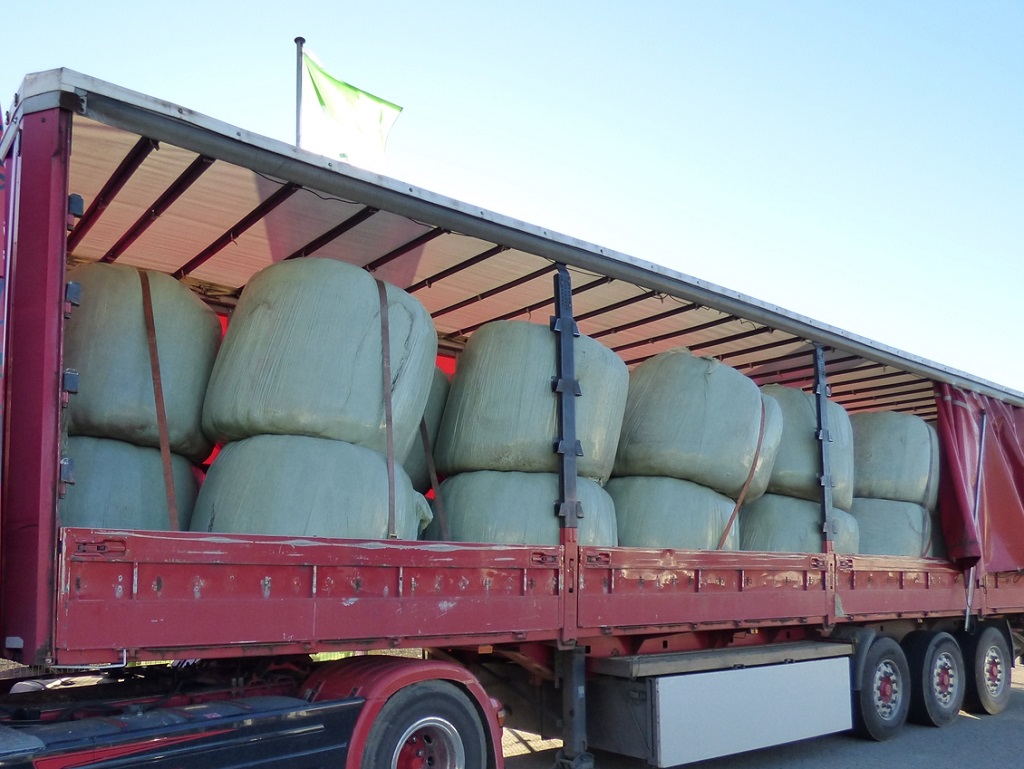 It is sometimes quite remarkable how consistently the laws of physics apply – almost as if they were exercising some kind of malicious equanimity. Soft loads, whether they be big bags, Octabins, palletized bagged cargo or, as in this case, wrapped silage bales, are generally extremely difficult or even impossible to secure with tie-down lashings. 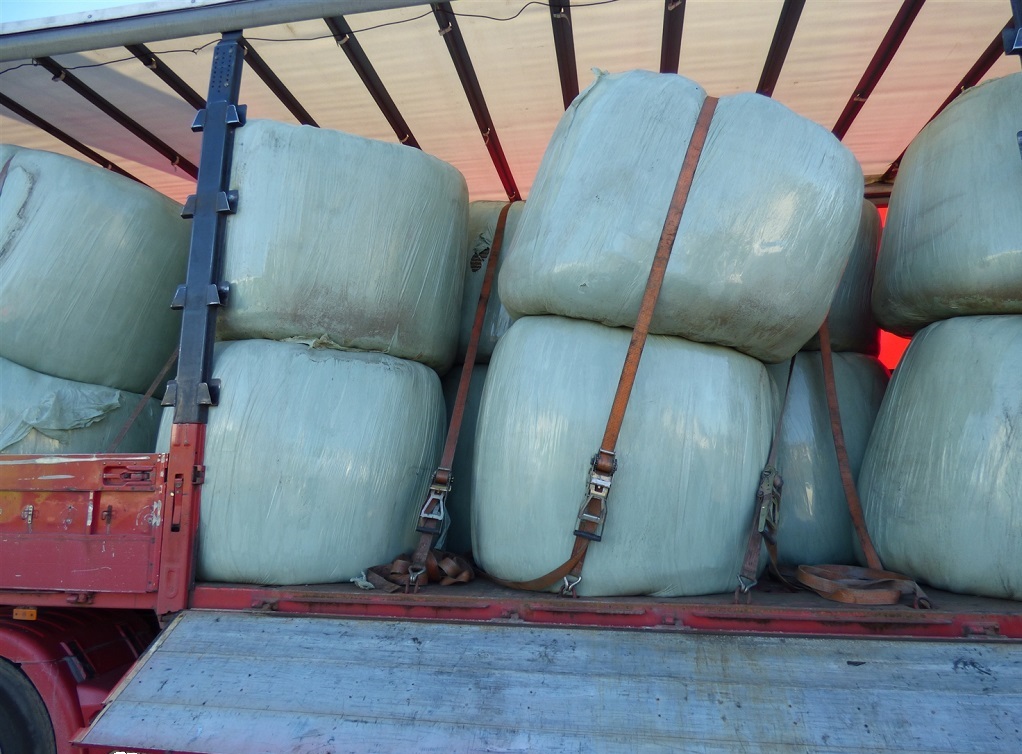 A few of the people who discussed these photos with us even conjectured that the load had initially been secured while it was stacked vertically. A deliberate attempt had then been made to cause the load to tilt backwards by pulling away relatively sharply, perhaps even uphill, with the intention of increasing the pre-tensioning force of the belts. We were, of course, not prepared to take part in such discussions. And we would also have seen a sharp braking maneuver while traveling forwards in order to achieve the same effect as equally pointless – even though it has been proved that loads that have been lashed down always move, and are permitted to move, and that if they slip or tilt by a few millimeters, or even centimeters, the pre-tensioning force increases. But these are just side-effects that cannot be taken into account when making safe calculations for securing loads.

The thing that makes soft loads so extremely difficult is that they give way to the force exerted by the tie-down lashings, and generally do so constantly. In other words, the load will never be compressed to such an extent that the tie-down lashing or the force it exerts will cause the load to become more or less stable and static. Instead, such loads work their way past the belt to the left or right, particularly during the journey. They give way. The pre-tensioning force disappears and the securing effect is lost. In the case of uniformly palletized loads, large, hollow-profile edge protectors help to deal with the problem. These protect the load, distribute the pressure over a large area and hence give the load no opportunity to work its way around the belt, since the belt has no direct contact with the load, but instead passes the force it exerts to the load evenly through the wide edge protectors. In this particular case, as with big bags and similar loads, edge protectors are not likely to be effective, as the load is too irregular in shape. The simple truth is that loads such as this should be secured and transported as a tight fit. It would make sense to dimension the silage bales in such a way that they can be placed next to each other on the loading bed as a tight fit. This would go a long way to achieving an interlocked load block. The stacked silage bales in this case are more reminiscent of melting snowmen in spring than of cargo that has been stacked and secured conscientiously. 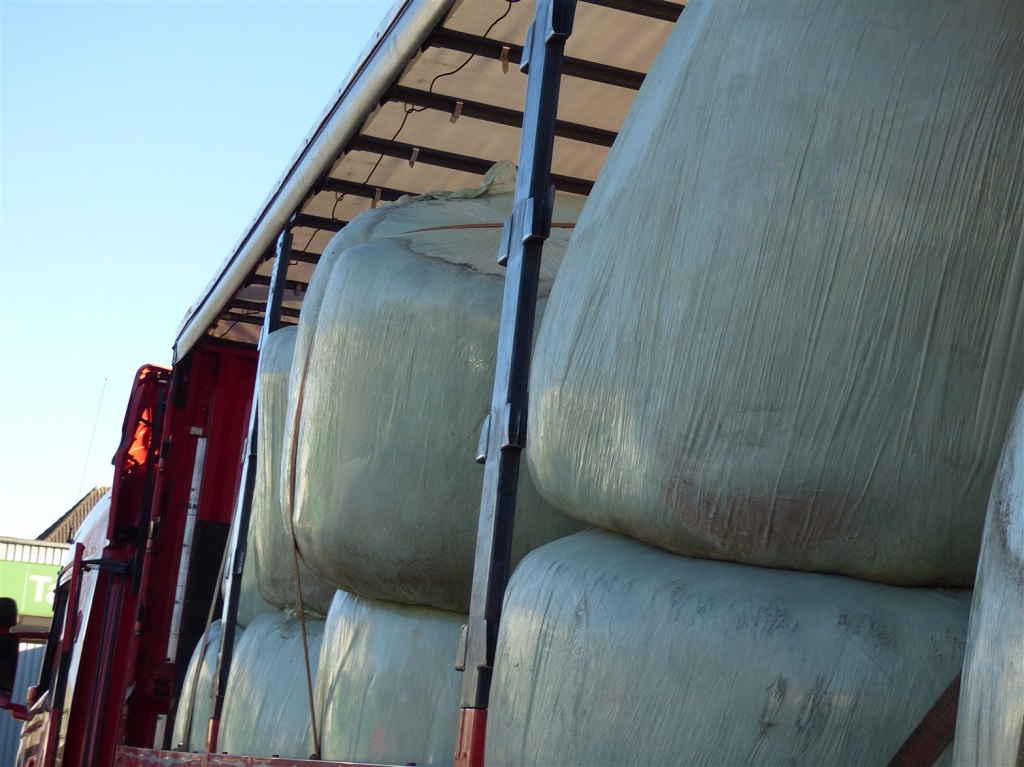 These pictures and this attempt to secure a load are no laughing matter. We only have to look back at our Photo of the Month from August 2016, where a woman in an oncoming vehicle was killed as a result of straw bales falling from a truck. These silage bales are heavy, difficult to handle and even more difficult to secure. 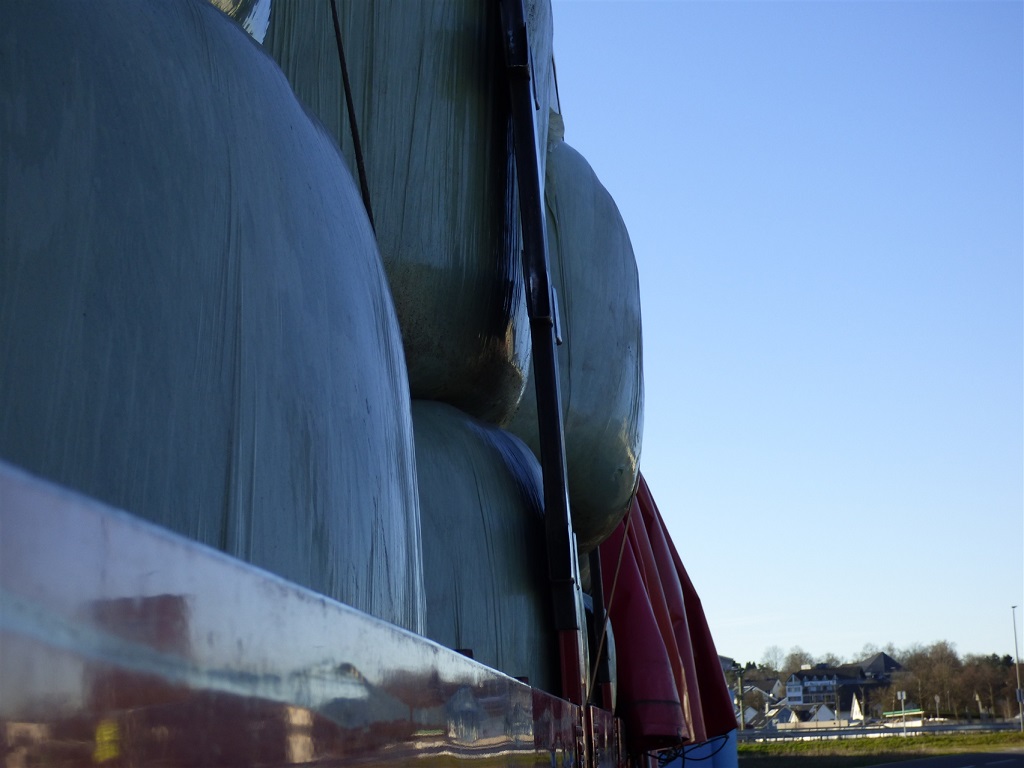 This figure shows that the load also moved sideways as a result of acceleration forces to the rear. Given the instability of these stacks of silage bales as evidenced by these photos, it is not hard to imagine that the next lateral acceleration force would cause the first bale to make its way through the tarpaulin and onto the open road, where it would become a deadly threat.

Load-securing to the rear:

Even expert loss adjusters are regularly surprised by the acceleration forces to the rear exerted on loads on a loading bed. We regularly see photos of trailers transporting cut lumber, for instance, and they consistently show that all the belts have moved diagonally backwards in parallel. This indicates that the load is subjected to rearward acceleration forces resulting from jolts as the truck moves off and which are transmitted through the drawbar. The photos of the silage bales show that considerable rearward acceleration forces also act on semitrailers, and that steps have to be taken to secure the load against such forces. Unfortunately, we have no photos that show whether the rearmost silage bales are already pressing against the rear doors. But we imagine that it would be an impressive image: A silage bale leaning out over the person who had just opened the door (but, we hope, not falling out).

As we have already said, loads such as this should be secured as a tight fit wherever possible. We can imagine that the load could be secured with load-securing tarpaulins, load-securing nets or structures that are also able to secure the second layer of bales as a tight fit. Another option would be to wind the bales with a diameter that would allow two bales to be placed next to each other on their sides (with the winding axis along the length of the trailer) and secured as a tight fit. A third bale could be placed between the bales using the "bilge and cantline" method. This third bale could be prevented from rolling out dynamically by securing it with a tie-down lashing. We cannot, however, judge whether the same quantity of silo bales could be loaded in this way.