A tree as a catapult 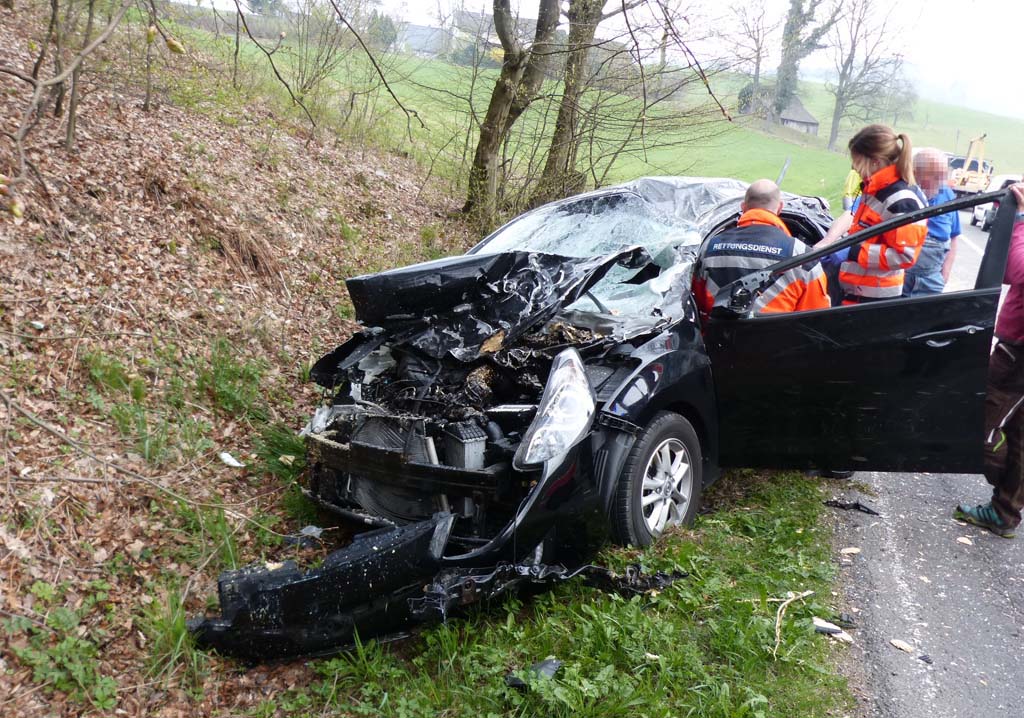 When we saw the car in Figure 1, a load-securing incident was not the first thing we thought of. Rather, it appeared to be a vehicle that had rolled several times. 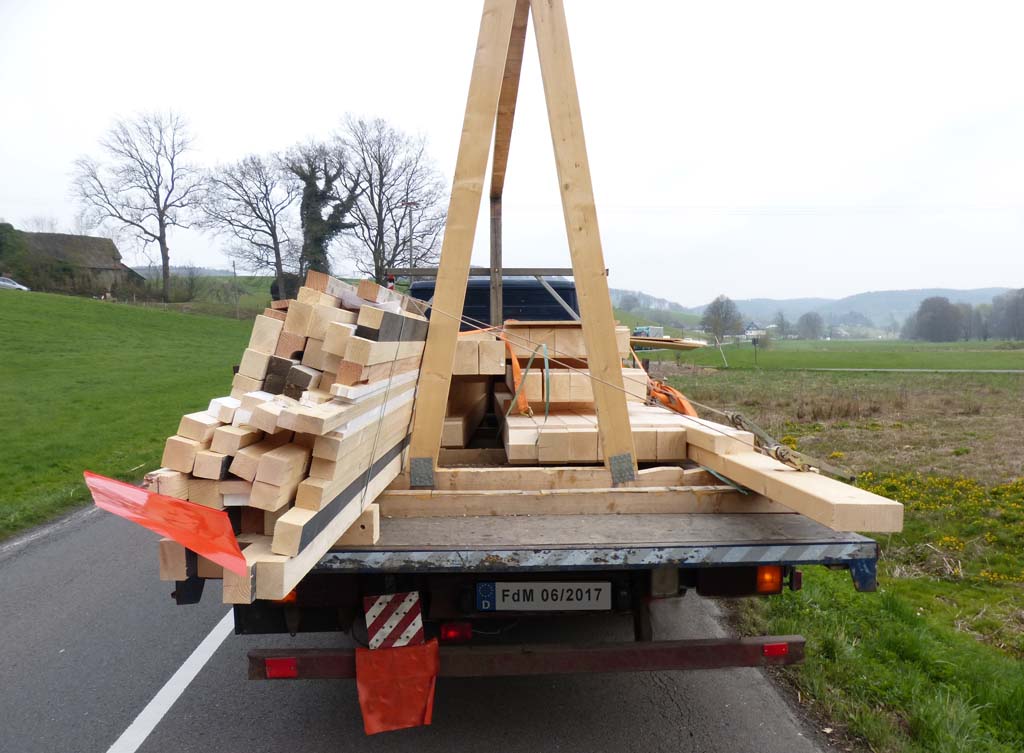 Far from it! We would not be talking about this accident if it had not been caused by faulty load securing. The culprit was this vehicle, or more to the point the OSB boards that were loaded on top at the front. We were informed that they were secured with a tie-down lashing. For whatever reason, this had come adrift, was not attached effectively or was attached using angles that were far too shallow. This is all conjecture on our part. But it is a fact that the OSB boards fell from the loading bed to the right. 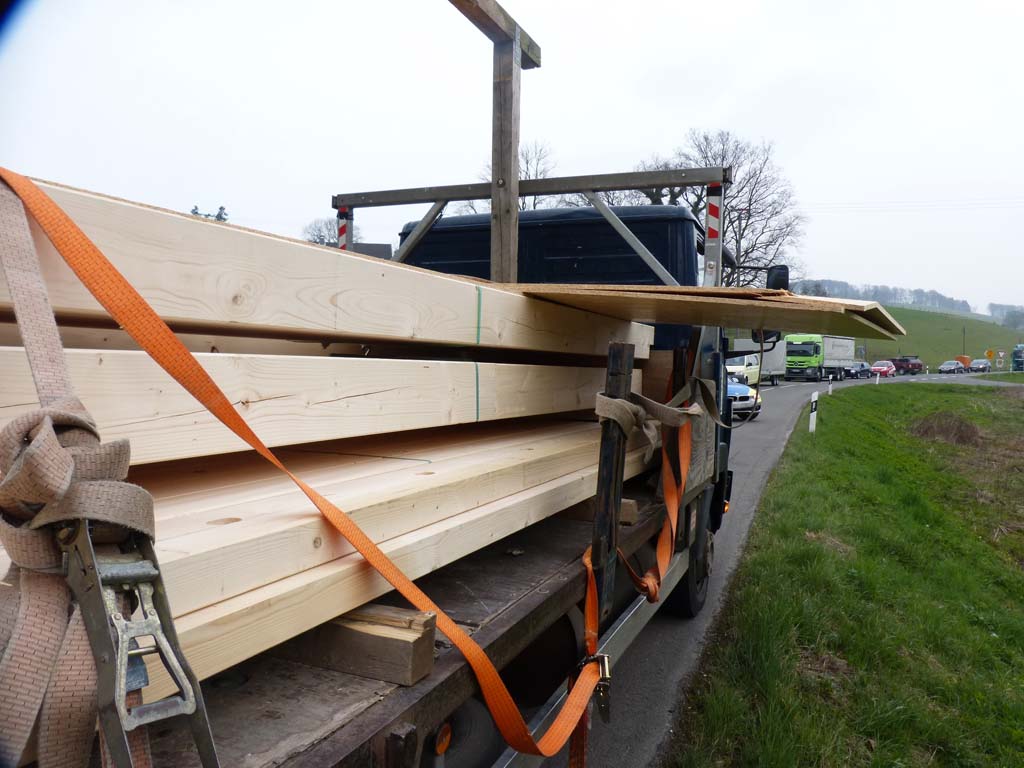 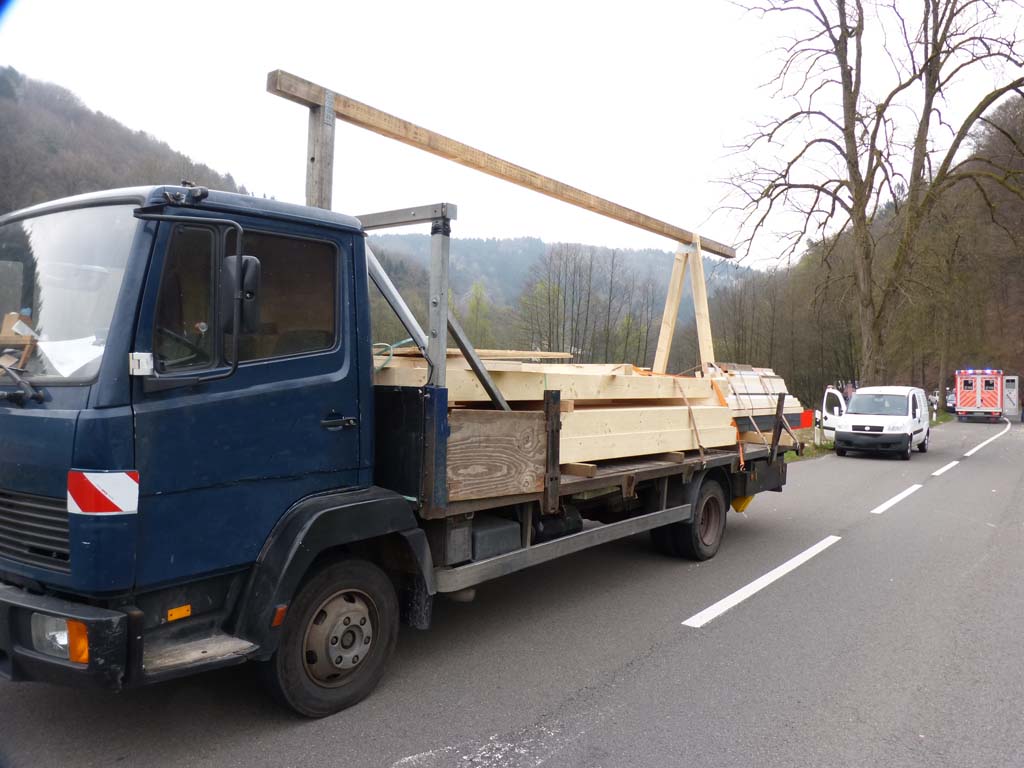 Figure 3 clearly shows the OSB boards protruding way beyond the side of the truck immediately above the vehicle. We can also see that they were in all probability far narrower than the rest of the load beneath them. The tie-down lashings that were intended to secure the boards only reached this part of the load at an extremely shallow angle. Lashing equipment that is placed over the load at a shallow angle only generates a small vertical component of the securing force. But vertical components are those that represent the bulk of the securing force of the securing equipment. The effect of tie-down lashings is based primarily on the principle of artificially making the load heavier. To do this, a belt must generate vertical downward forces, and it cannot do so if it runs over a load at a shallow angle or effectively simply lies on top of the load. During the journey, the boards worked their way out from under the belts as a result of vibrations, cornering, etc. and then fell off the vehicle to the right.

The following vehicles saw this happening and flashed their lights and sounded their horns to warn the driver that his load was falling off to the right of the vehicle.

The driver assumed that the flashing and the horns were just what car drivers do when they have far too little time and want to drive faster than the truck will allow them. And so, the truck driver simply carried on driving and sadly failed to look in his right-hand mirror, where he would probably have been astounded to see his own load waving at him.

And so, one thing led to another: The load was hanging far out to the right of the vehicle. And, unfortunately, a tree was standing close to the edge of the vehicle. The OSB boards hit the tree at full speed and were immediately flung from the vehicle into the opposite lane. Sadly, a car was coming the other way and was hit head on by the stack of boards. The driver had a narrow escape and her injuries were only relatively minor. And the team here wish her a speedy recovery.

But let us get back to the way the load was secured and the monstrous frame that adorned this vehicle. It was not an A-frame since there was only a well-built A at the back. At the front, there was just a single support standing forlorn on the vehicle. 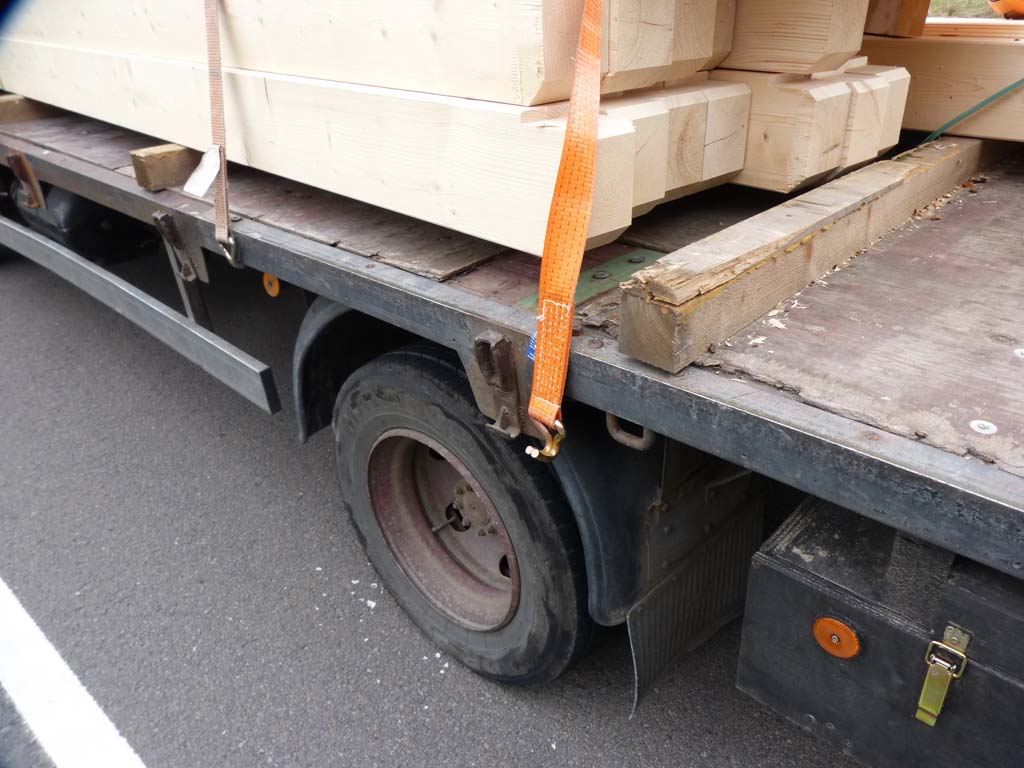 As is normal for an A-frame, wedges were glued to the bottom dunnage, and we hope that this dunnage was firmly screwed to the vehicle frame and the loading bed. At least, the residue that has been squeezed out between the two pieces of wood lead us to believe that this was some kind of glued joint. In principle, an A-frame is eminently suitable for loads like this. But in that case, a proper A-frame should be used. In other words, an A-frame at the front, an A-frame in the middle and an A-frame at the back. And if shorter loads are often transported, a 4th A-frame would also make sense, since frames like these are excellent for securing loads as a tight fit, at least to the sides. The load is then secured with a second tight fit in the form of the belt placed around the load as a loop lashing. Of course, it is not enough to simply place parts of the load on top of the rest of the load or to push them under the belts in the hope and belief that they will somehow stay put. That doesn't work, as is amply demonstrated by this Photo of the Month, and any sloppiness can become a deadly threat on the roads, as we have seen here.

Few of us still remember an accident with particleboard that happened a few years ago in Greece. In that case, particleboard or plywood boards fell from a vehicle and collided with an oncoming bus full of children. Half of a class of schoolchildren lost their lives. And an accident like that could equally as well have happened here, since the OSB boards were flung into the oncoming traffic with such force that it is little short of a miracle that nothing more serious happened. 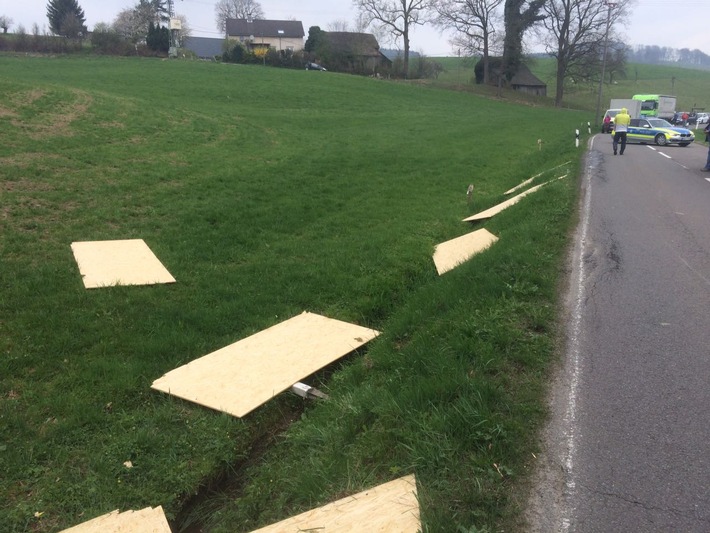 The way that the OSB boards have been scattered shows the force with which they were flung into the oncoming traffic. 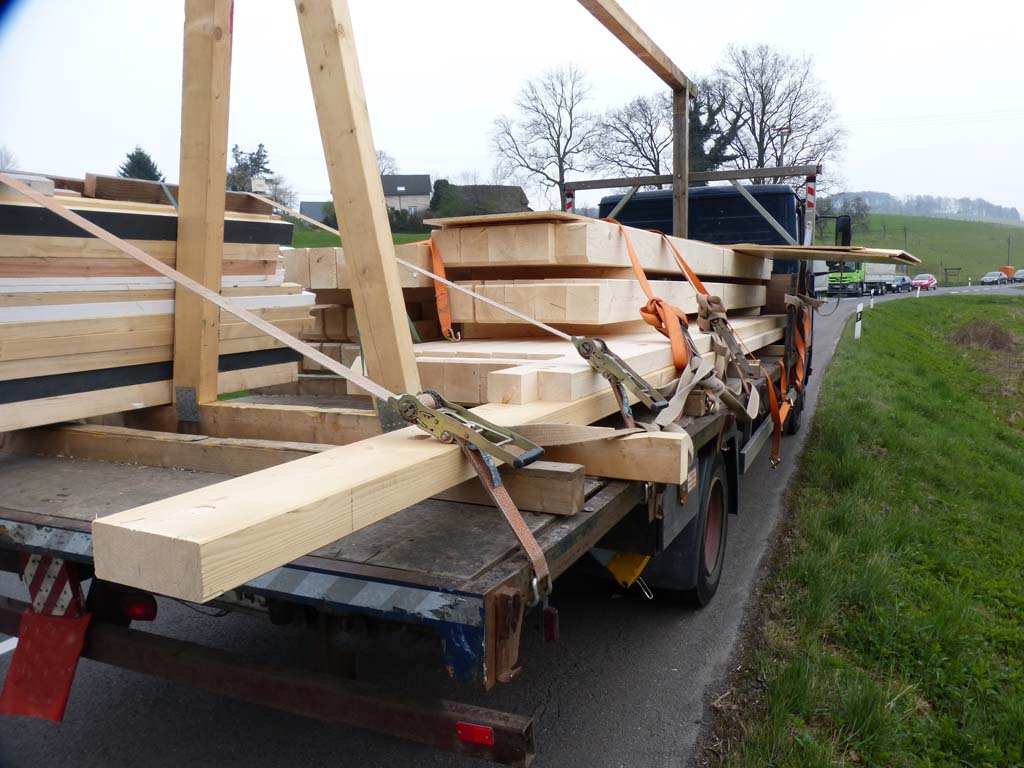 In Figure 6 we can see the two tie-down lashings that are now acting as direct lashings (it is perhaps clearer in Figure 2). The wood is pulled into the A-frame at an angle, which means that it is excellently secured (to the side). But Figure 6 also shows that the beneficial effect of an A-frame does not apply in the middle, because there is no A-frame there, and the load is simply standing unsecured on the loading bed. The belts cannot generate any direct securing effect. The wooden beams were simply secured with tie-down lashings and, to repeat it for the last time, the OSB boards were simply lying on top, only to come to an inglorious end. One thing that is odd in this case is that the rear A-frame has clearly been professionally built by carpenters, but protrudes a little beyond the sides of the vehicle. By eye, we estimate that the bottom wooden beam protrudes beyond the sides of the vehicle by a good 15 – 17 cm. And if we look at the other side of the vehicle in Figure 3a, we get the impression that the truck was nonchalantly driving along with an overwidth load.

Don't misunderstand us: We have immense respect for carpenters, because they often work with peculiar geometries that survive and do their job for decades or centuries in the roofs of houses. But these particular representatives of that ancient craft should have taken the same care when constructing the A-frame for securing this load.

To secure the load more effectively, the tie-down lashings could have been arranged as loop lashings in the first place. Load securing points in the middle of the vehicle would make eminent sense to make it easier to secure individual load units with loop lashings.

Our wish for all road users is that they never have to experience an encounter with OSB boards like this, and for ourselves, our wish is that the material for our column will dry up at some time.