Regular readers of our column will already have noticed from the title that we are not just talking about a tie-down lashing, but also something that is, quite frankly, rather a lash-up. Put together in haste, this arrangement has little appearance of permanence or stability.

But first, we want to say something positive, and this is not difficult with this load. The load is resting on dunnage with a rectangular cross-section. This is entirely positive, and is something we promote wherever we can. Such rectangular dunnage has the huge advantage that it cannot roll in the same way as square dunnage when under load, for instance during emergency braking. Instead, it simply stays put. We would like to add a few more positive comments, but this Photo of the Month doesn’t give us a great deal of cause to do so. Towards the back of the trailer, we can see a socket for a stanchion in the middle of the loading bed. For a brief moment, we dared to hope that at least the counterweights that were loaded further back may have been loaded as a tight fit around and against a stanchion. But after we took a look at the rest of the load, this hope evaporated. 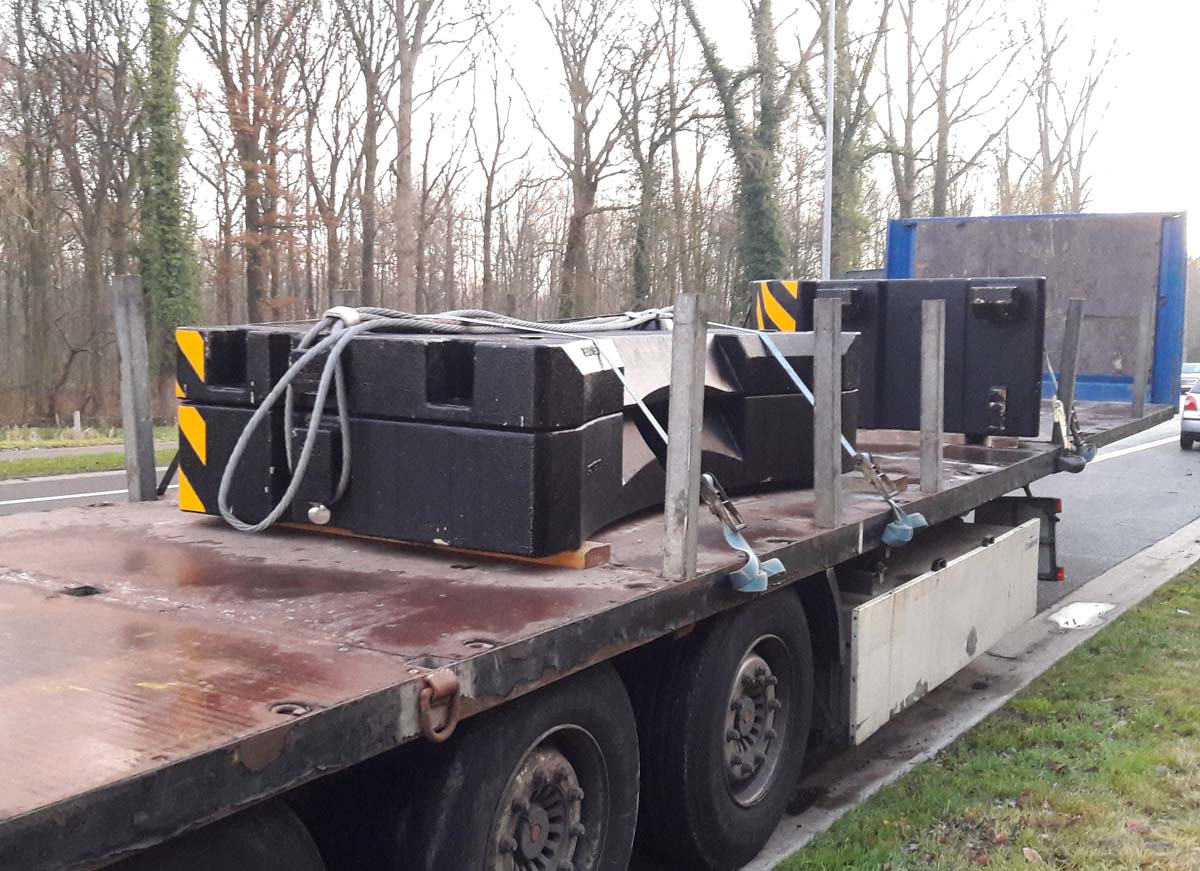 It is not difficult to see that the load is made up of counterweights for a mobile crane, which are being transported separately. The counterweights that are standing on their own at the front each weigh 6350 kg. Our friend and load securing expert André Brussel, who was kind enough to pass on these photos, told us that the two flat counterweights stacked at the back probably weigh 13.5 tonnes.

As we have already mentioned, the securing method chosen was tie-down lashings, with two belts being used for each load block. Different types of long-lever ratchet handles were clearly used, and the increase in friction was limited by the coefficient of friction of rough-sawn lumber. No anti-slip mats were used. 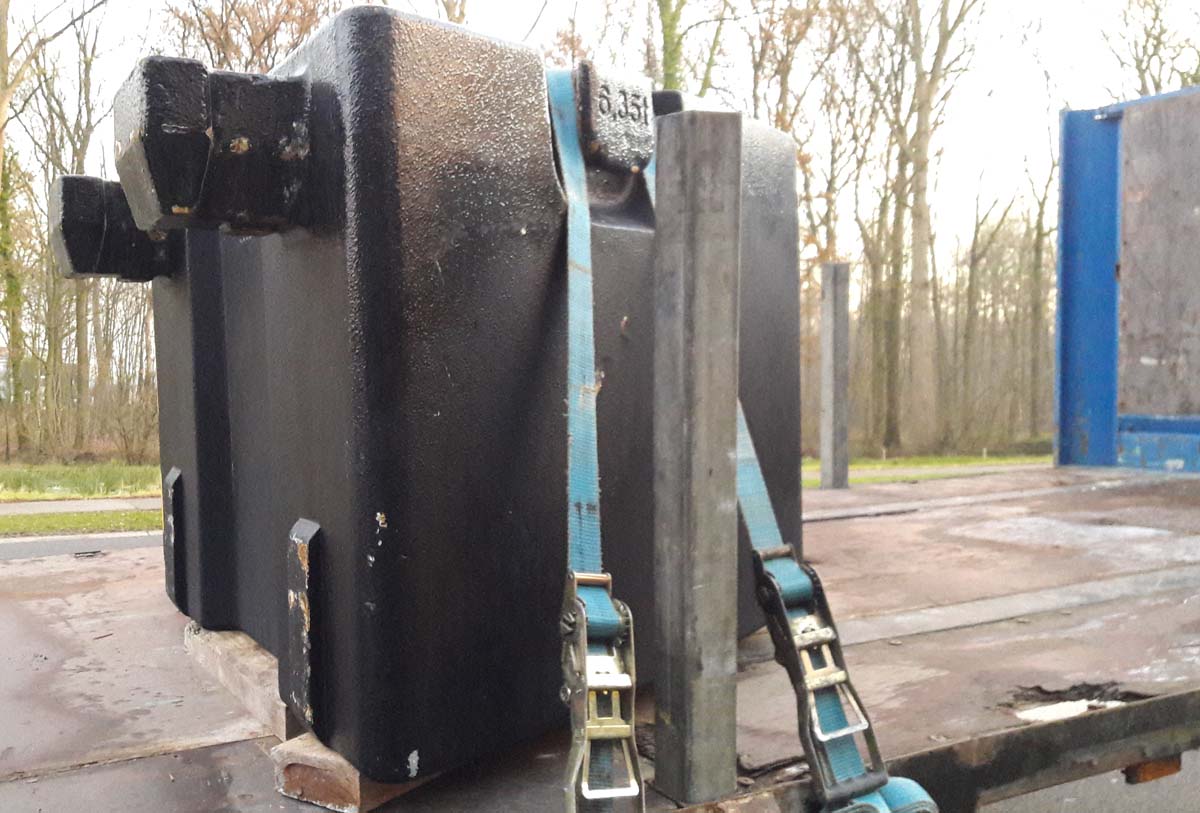 The two counterweights that were loaded further forwards each weighed 6350 kg and were also „secured“ with tie-down lashings. The fact that these belts are clearly showing signs of wear and are in need of urgent inspection is something we shall not address further this month. But we do want to have a good look at the tie-down lashing itself. The angles between the belts and the load itself are negligible. We also assume that 100 % of the pre-tensioning force is transmitted from the right to the left side of the vehicle with no difficulty, and so we can relax a little and take a look at Figures 3 and 4.

To start with, our only real concern (and one probably shared by our readers) was that we were of the opinion that it is not possible to sensibly secure 6.35 tonnes with just two tie-down lashings. But we became rather more worried when we looked at Figure 3 and noticed that it showed two identical counterweights, i.e. 2 x 6.35 tonnes, secured with just two tie-down lashings. And we became positively alarmed when we looked at Figure 4 and saw that the two parts of the load were not even in contact with each other.

Even if it is a little unrealistic, we shall assume that the two long-lever ratchet handles achieve a pre-tensioning force of 750 daN and that this force is also transmitted without loss to the left-hand side of the vehicle. This gives us 2 x 1500 daN of pre-tensioning force, or a total of 3000 daN. We shall be kind to the loaders and the driver and also assume a good level of friction, namely that of rough-sawn lumber, which delivers a coefficient of friction of 0.4. (In the case of the dunnage actually used here, however, it is almost certain that this level of friction no longer applies, as it has already been used several times and its surface no longer deserves to be called „rough-sawn“.)

If we return to Figure 2, we shall simply pretend that this tie-down lashing is intended to secure just one counterweight. We are dealing with a weight force of 6350 daN, which has to be secured against an acceleration of 0.8 g (5080 daN). Friction accounts for 0.4 or 40 % of the load-securing force (2540 daN), so that we still need an additional 2540 daN of securing force for this single load block. The lashing provides 3000 daN of pre-tensioning force and also acts through the coefficient of friction μ of 0.4 (3000 x 0.4 = 1200 daN). This leaves a securing force of 1200 daN. If we subtract this 1200 daN from the 2540 daN we calculated, there is a shortfall of 1340 daN securing force, even though we took an unrealistically generous value for the pre-tensioning force. And the same applies to the coefficient of friction. 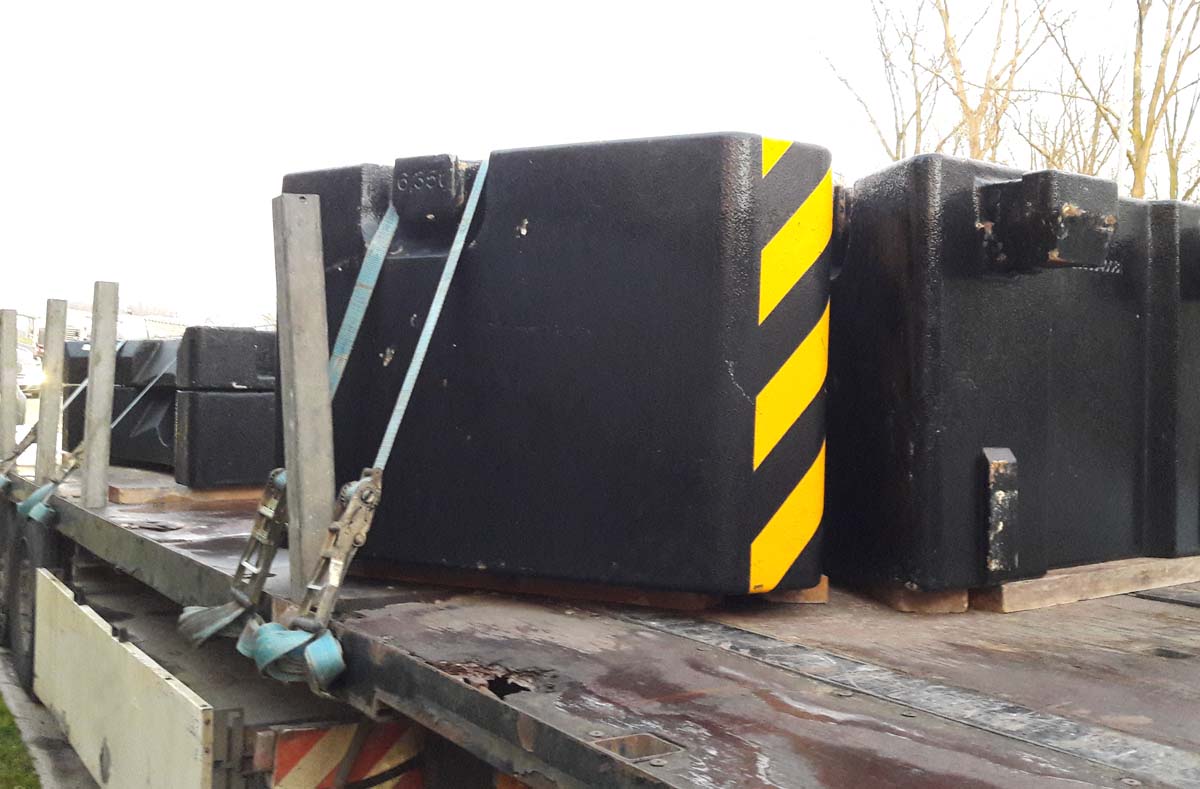 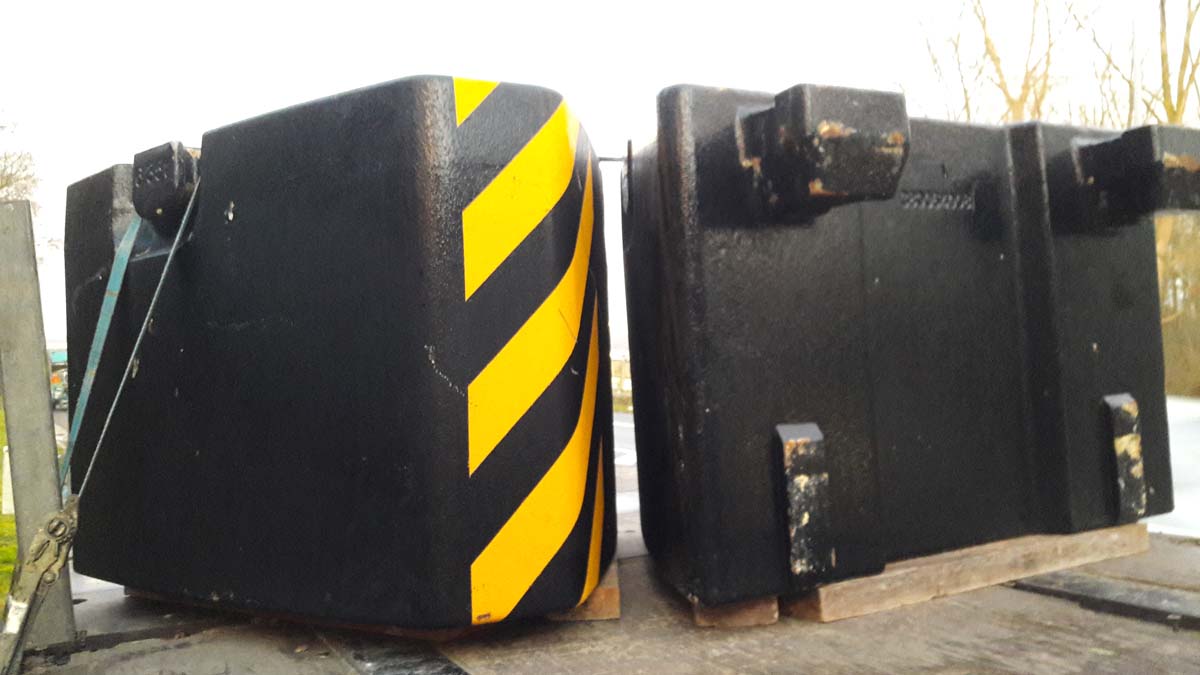 If we now turn to Figure 4, we can see that the counterweights were not loaded tightly against each other. In the world of load-securing, this is a cardinal error. It does not take long to explain why: Tie-down lashings always exert a diagonal, inward force on the load at the points at which the belts are deflected. Vibration of the loading bed can cause the load to creep slightly in the direction in which the force is acting, i.e. the parts of the load move towards each other. If the load closes up by just a few millimeters, the distance the belts have to cover is shortened, and the pre-tensioning force drops. Depending on the amount the load moves and the nature of the loading bed, these effects can relatively quickly lead to the loss of large parts of the pre-tensioning force. When such grave mistakes are made when using tie-down lashings, we are often tempted to ignore them when calculating the securing arrangements. How can such errors be avoided? The items that make up the load are immediately loaded tight up against each other. And if the loader is worried about the paintwork on the counterweights (which is understandable), suitable lumber is placed or nailed between the items. A T-beam can be inserted at the top and a piece of rectangular dunnage can be placed on end at the bottom in order to separate the items of the load. It goes without saying that this dunnage must also be secured to prevent it falling from the vehicle during the trip. Only then can it do the job intended by the loader and driver at the location they intended.

It is clear that loads like this are not loaded by the driver, but by the crane operator. And this is the person who positions the counterweights on the loading bed. It is the job of the driver to indicate to the crane operator where the overall center of gravity of the load is to be located. On this trailer, the maximum point on the load distribution curve will be approximately 80 cm to 1 m in front of the first axle unit. This is approximately where the center of gravity of the flat counterweights is located, but the upright counterweights, weighing almost 13 tonnes, further towards the front shift the overall center of gravity forwards significantly, which means that even the load distribution here is little short of a catastrophe.

In particular with loads as heavy as this, it is relatively easy, and absolutely vital, to distribute the load in such a way that the overall center of gravity is located at the point required by the load distribution curve of the trailer. As far as positioning the items of the load in relation to each other is concerned, the crane operator and the driver must together agree how the load can best be secured. Above all, idiotic gaps in the load such as those we see in this example must be avoided at all costs. The crane operator is not simply doing the driver a favor if he helps with load securing. On the contrary, he is part of the chain of responsibility, since the loader is always jointly responsible for load securing.

We completely fail to understand why no anti-slip material was placed underneath and on top of the dunnage for the sake of simplifying the process of securing the load. If the person responsible really wants to secure the load with tie-down lashings, then they should at least benefit from a sensible coefficient of friction μ of 0.6. If this had been done, even the flat counterweights at the rear could have been secured with tie-down lashings with a pre-tensioning force of 4666.66 daN. Given the existing angles of the belts, this would need four lashing belts with an STF of 750 daN. Of course, it goes without saying that we recommend securing a load like this with loop lashings and direct lashings, but we shall not go into that in this Photo of the Month.