In this Photo of the Month, we shall be looking at a road traffic accident. The accident had a culprit, which can be seen in Figure 1. 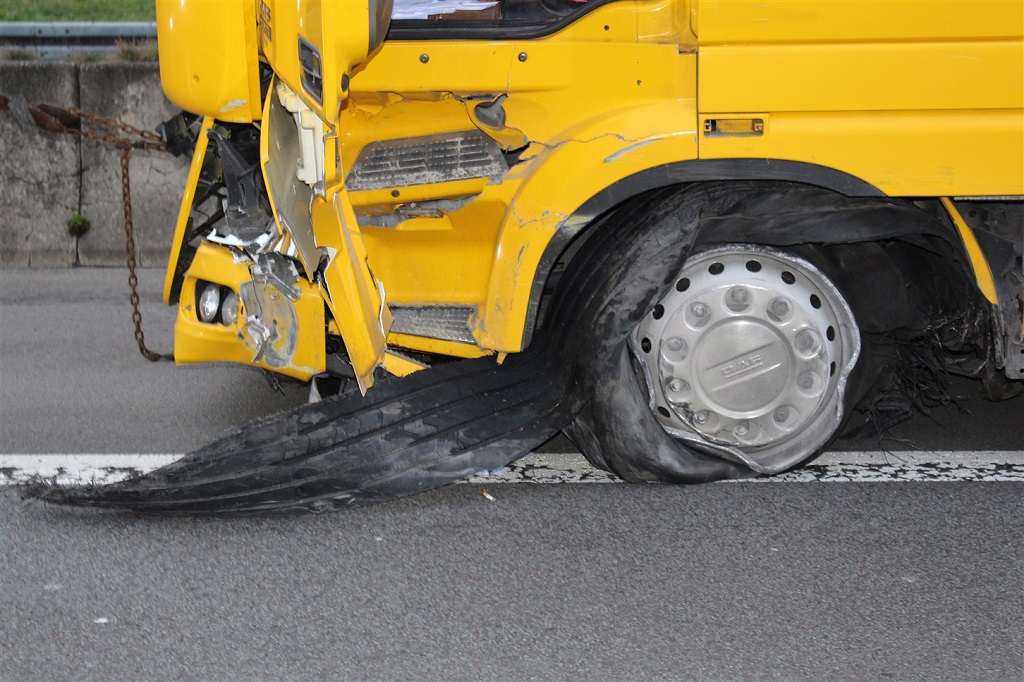 It is a burst front tire. After the tire burst, the vehicle, which was loaded with concrete pipes, slewed towards the concrete barrier at an angle of around 45 degrees, collided with it and then scraped along it for some distance. In the process, the vehicle must have slapped against the barrier like a windshield wiper. 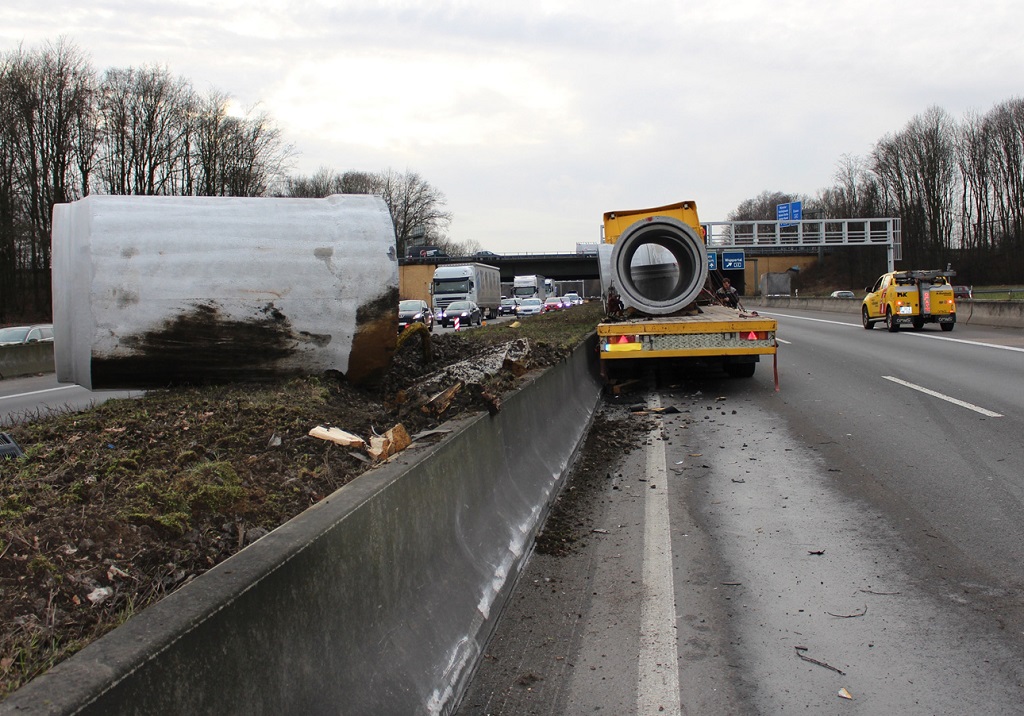 As the trailer slapped against the barrier, the rearmost concrete pipe broke free and rolled onto the raised, heavily protected central reservation. Anyone looking at this picture will grasp the potential ramifications of this accident. 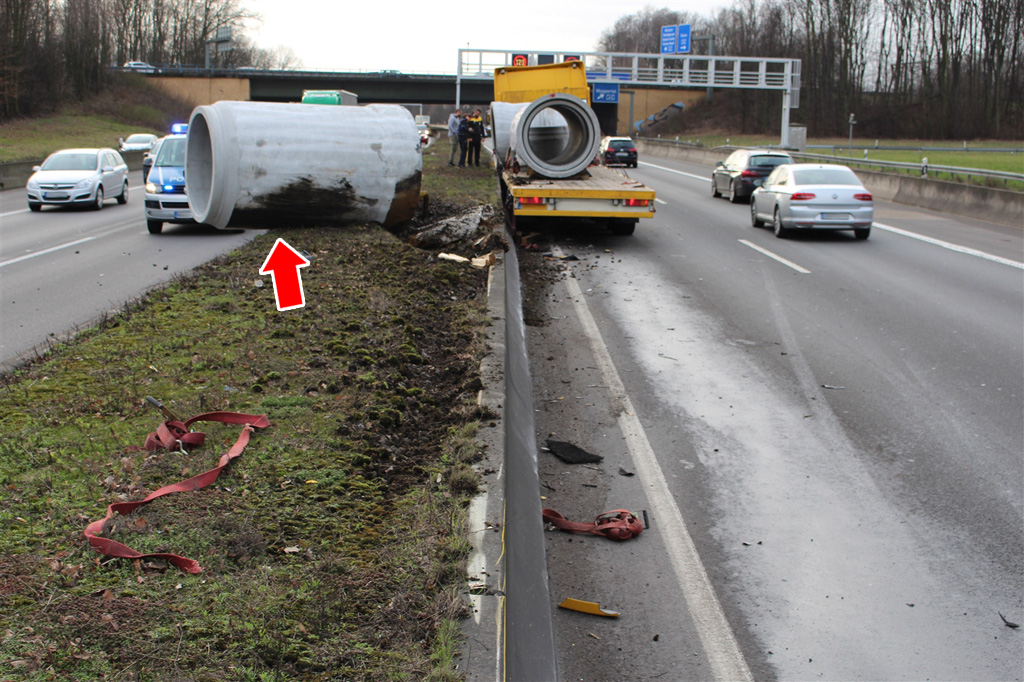 Figure 2a clearly shows that the accident would have had catastrophic consequences for the oncoming traffic if the impact had released just a little more energy. But we do not wish to dwell on imaginary apocalyptic scenarios, but instead want to look at exactly what good load securing can and must deliver. 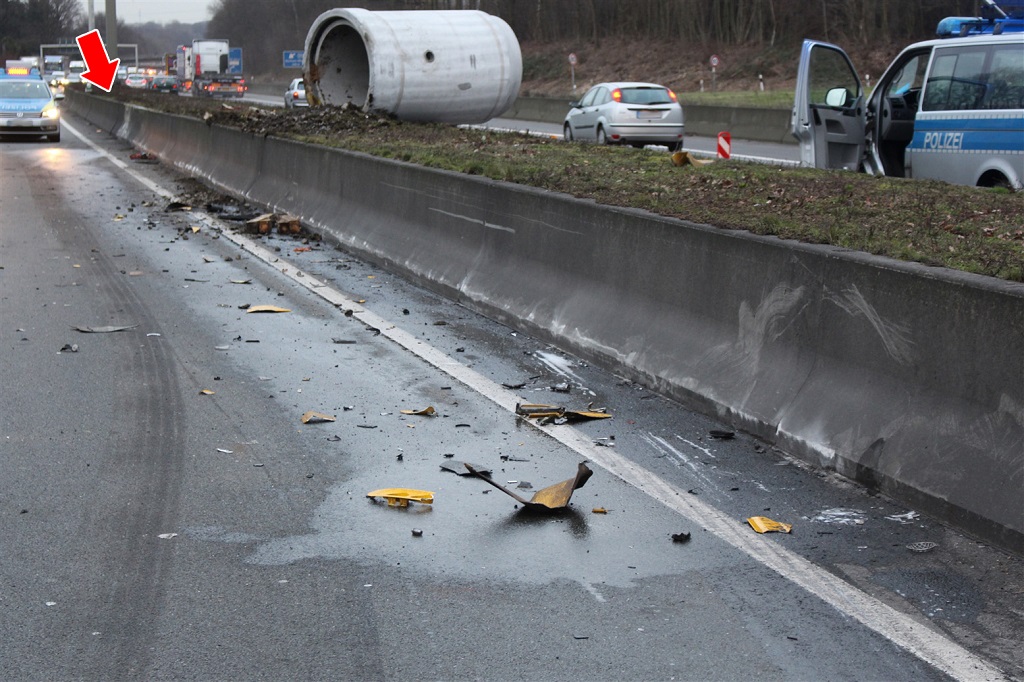 The marks on the safety barrier show precisely (red arrow) where the truck collided with the barrier and how far the articulated vehicle scraped along the concrete wall. The concrete pipe slipped off the left side of the trailer and dug into the central reservation, which is filled with gravel and soil. 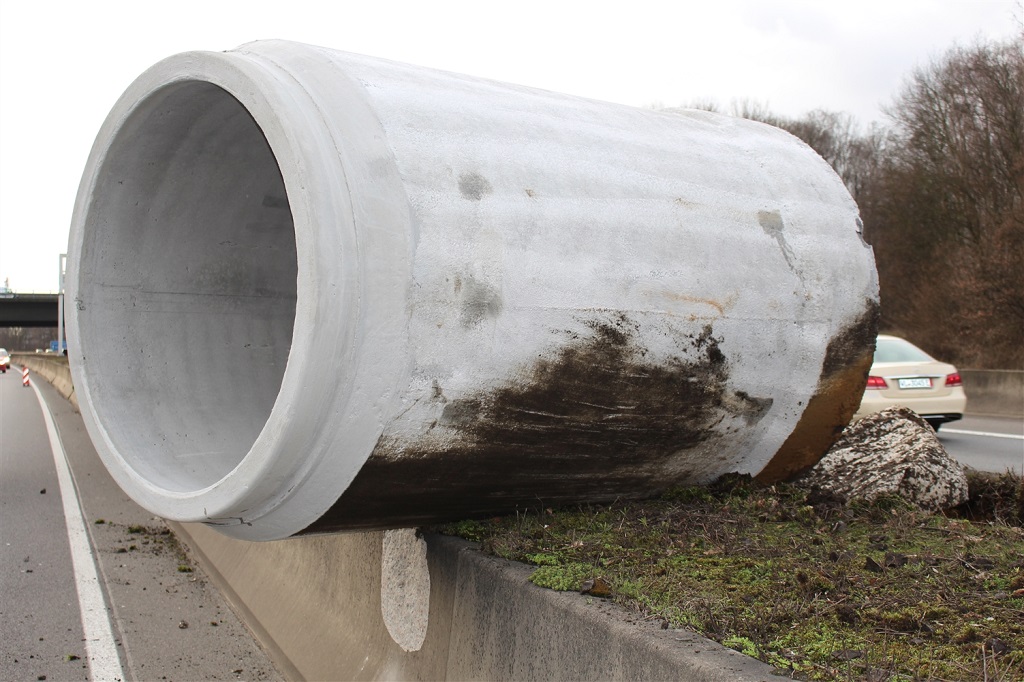 In the process, the concrete pipe rose up slightly, turned through almost 90 degrees and then fell on the concrete barrier of the opposite carriageway. Figure 3a shows where a large patch of concrete flaked away from the concrete wall as a result of the impact. 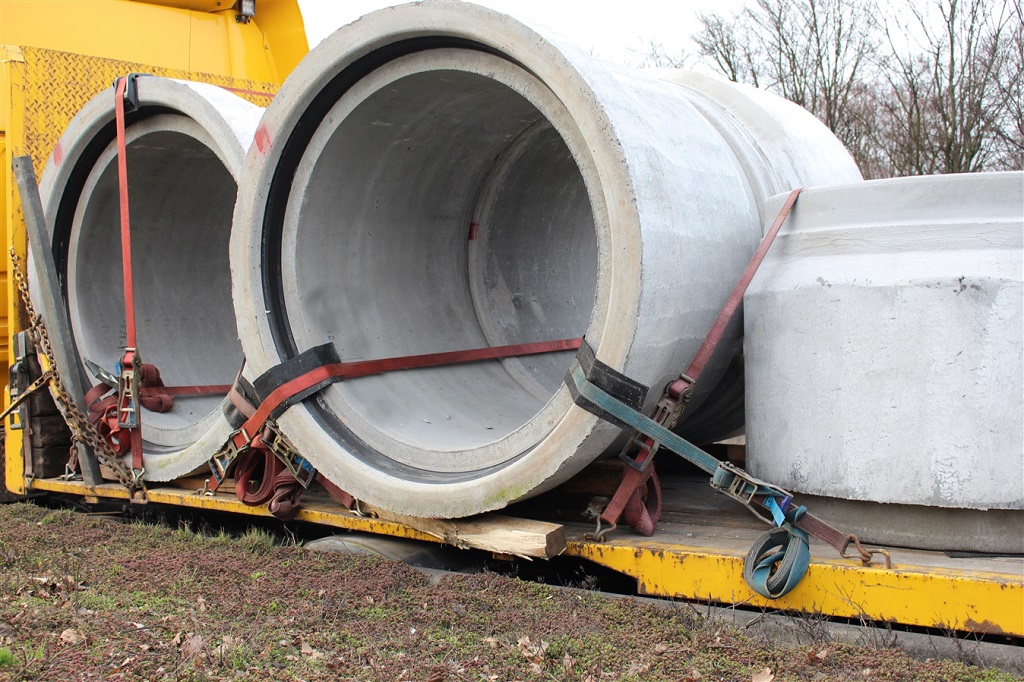 Photos such as these are a goldmine for any load-securing columnist. Let's start at the front:

The end wall has clearly been strengthened with chains, since we can see one not only here on the left of the vehicle, but also on the right of the vehicle in Figure 5 below. They run down to the loading bed at an angle of around 45° and can improve the stability of the end wall. The vehicle is loaded with concrete pipes. The first two concrete pipes were loaded with the rolling direction in the direction of travel, the third, smaller pipe was loaded standing on end and the two rearmost pipes were loaded lying down with the rolling direction lateral to the direction of travel. The strategy and implementation of the load securing measures were a pleasure to behold.

The first pipe was prevented from rolling backwards or forwards longitudinally using two direct lashings. One tie-down lashing was used as a direct lashing to prevent the pipe from rolling over the wedges longitudinally. The second pipe is loaded as a tight fit against the first pipe and is also prevented from rolling backwards or forwards using direct lashings. The third concrete pipe, which was loaded vertically, is standing on anti-slip mats (as is the wooden dunnage under the first two pipes), although we do not know the thickness of the material. Following the accident, the tight fit had been maintained to the front and to the rear. The pipe was secured with two tie-down lashings passed diagonally over the vertical pipe. At least one of these had a long-lever ratchet handle. 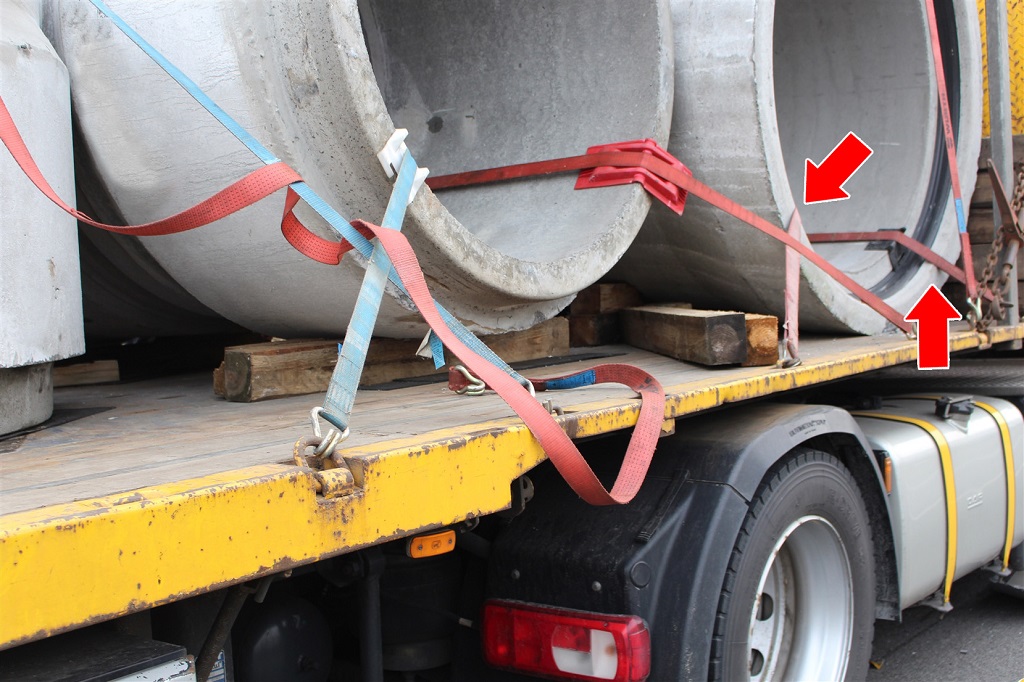 In Figure 5 we can just make out the wedges that had been placed on the dunnage of the first pipe. Between the first and second pipes there is a piece of dunnage with wedges nailed to it. We can no longer say where this dunnage had originally been placed. We would not enjoy our reputation as load-securing columnists or even as load-securing grouches if we did not manage to find a blemish in these pictures. There are probably a couple of reasons why lousy belts that were virtually all fit for scrapping were used to secure the load on this vehicle: On the one hand, the vehicle was probably regularly used for transporting concrete loads, and on the other, the measures taken to protect the belts against this extremely abrasive and sharp-edged load were rather haphazard. The red arrows in Figure 5 indicate the points at which the belts come into direct contact with the sharp-edged, abrasive load. 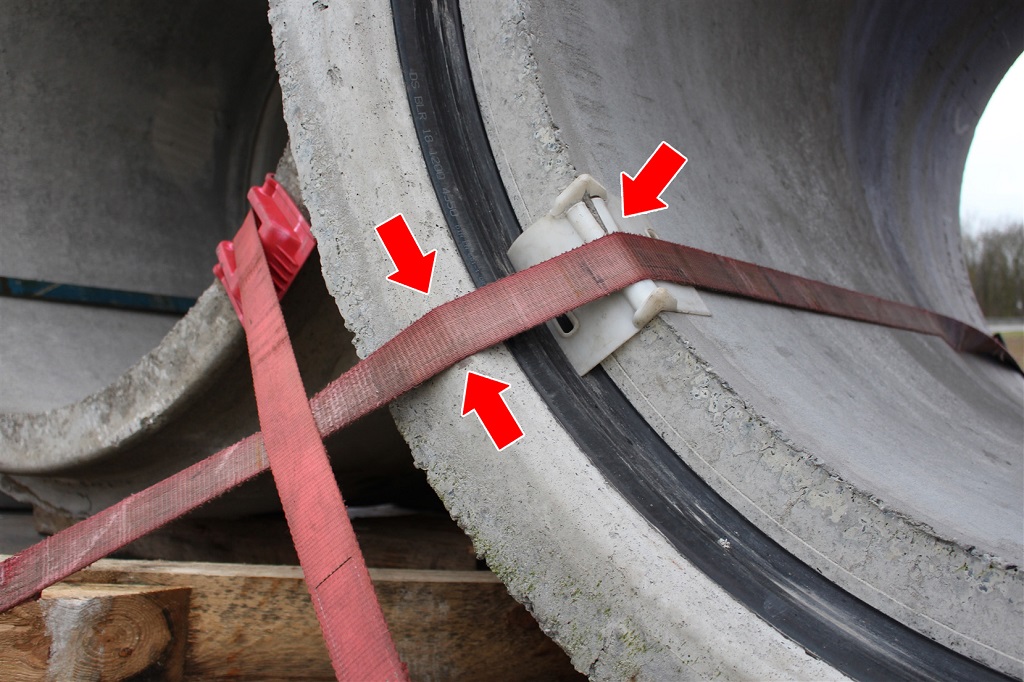 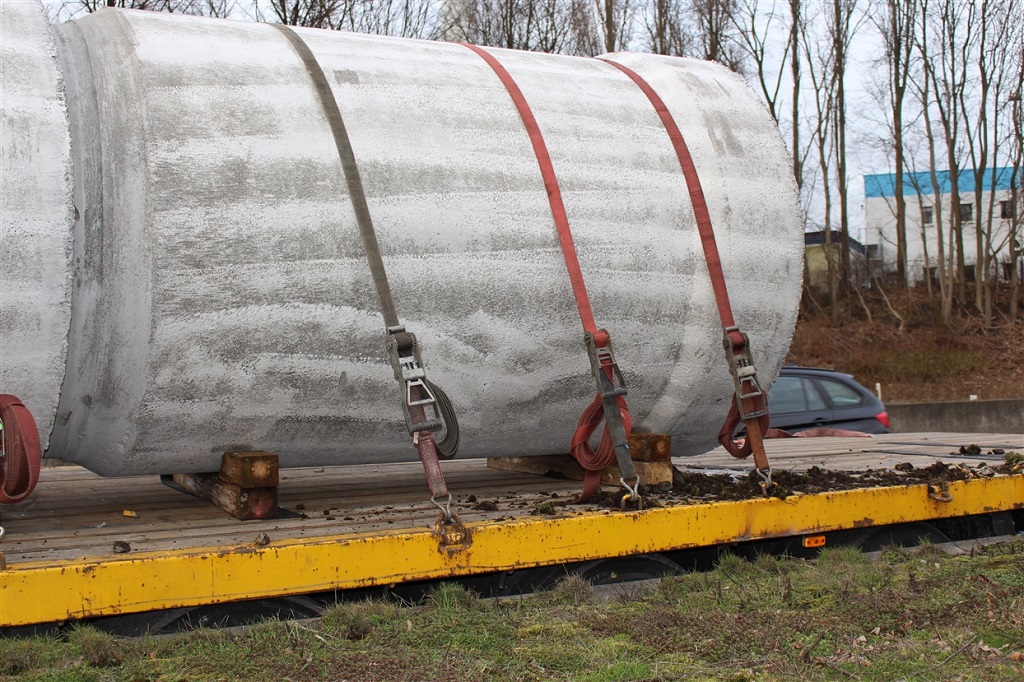 We are particularly grateful for Figure 7. It shows that a tie-down lashing is not just a tie-down lashing, but that it can become a direct lashing. Fundamentally, direct lashings only become effective when the load moves a little. The resulting elongation of the load securing equipment then causes it to deliver its full load-securing capacity. In other words, the chain or belt must stretch a little to generate the necessary counterforce. But physics is not always black and white. It combines elements of direct lashing and tie-down lashing, as is shown perfectly in Figure 7. The load has not only slipped almost uniformly to the left of the vehicle, as can be seen clearly in Figure 2; it has also slipped forwards. We can see that the dunnage is resting on anti-slip material, or at least was resting on anti-slip material, as it has slipped forwards a little and away from the anti-slip mat. The belts are secured directly over the abrasive concrete. We would again note our disapproval, as the belts suffer considerable damage from this. Protective sleeves over the entire length of the belts protect them and increase their service life many times over.

In Figure 3 we could see the marks left by belts slipping on the concrete pipe. We can only see the beginnings of this on the front belt in Figure 7. The fact that all the belts are at an angle shows that the concrete pipe must have slipped a considerable distance, not only to the left, but also to the front. In doing so, it took the belts with it and to a certain extent made them act as direct lashings, which increases the securing effect. The pre-tensioning force must have increased considerably, so that the securing arrangement restrained the load even when subjected to the forces involved in this accident, which involved acceleration far greater than that which would be experienced under any normal driving conditions. 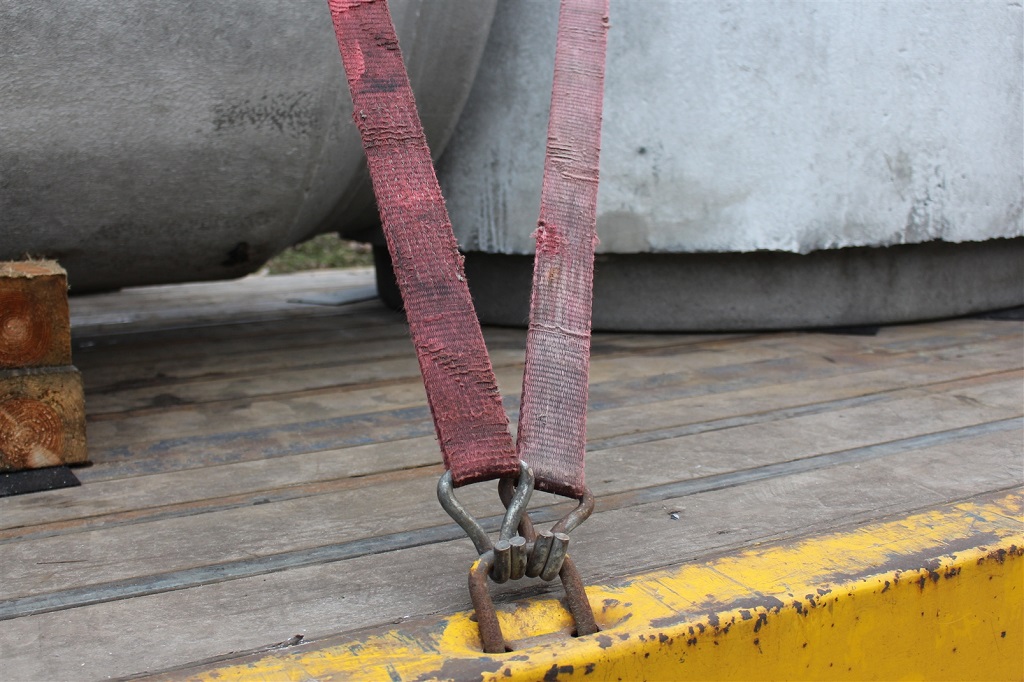 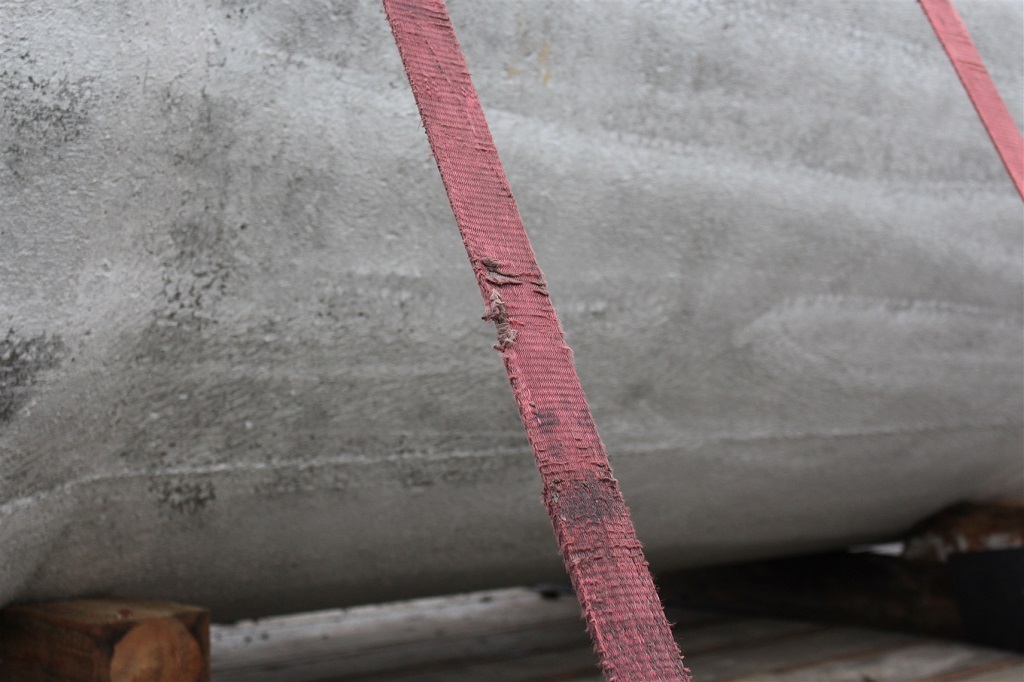 Figures 8 and 9 allow us to take a good look at the dreadful state of the belts. Along their entire length, they displayed signs of extreme wear, tears and similar damage which would probably have been enough to warrant throwing away all the belts.

And if any of our readers comes up with the argument "that's all very well, but these very belts just survived an accident, so why should the driver or carrier have replaced them with new ones?", we would just like to say: Perhaps new belts would even have kept the last pipe in place!

Of course, we are not peddling the opinion that load-securing measures should be dimensioned in such a way that they are able to keep a load in place even in the event of an accident. But this Photo of the Month proves that load securing also takes on a life-saving role in the event of an accident. All the belts, all the ratchet handles and probably even the load-securing points will have been subject to loads way beyond their capacity in this accident and will have to be scrapped afterwards. But, together with the sound design and implementation of good load securing, they prevented a disaster. As far as the extremely professional load-securing measures taken by the driver are concerned, we award top marks – something we hardly ever do. And for the load-securing equipment, at least for the lashing belts, we award the lowest possible grade because of its disgraceful condition, even though it was used properly.