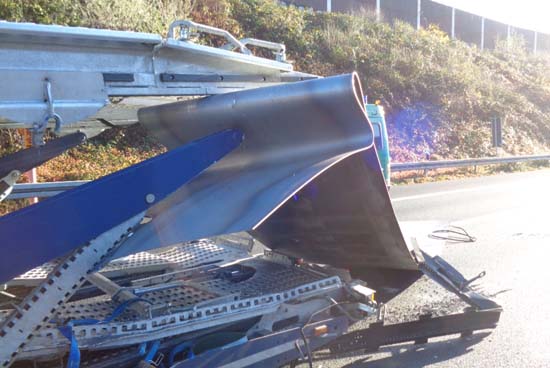 It is no accident that the title we have chosen reminds us of the effects of the deadly fragmentation shells used in World War I. The driver of this empty car carrier must have felt he was caught up in a war zone. After the vehicle, which was carrying steel, swerved to the left and braked, virtually the entire 19.2-tonne load slipped from the loading bed. As Figure 1 shows, the steel sheets clearly kept moving at the same speed and in the same direction and only converted this kinetic energy into deformation energy when they reached the car carrier. Even though the steel sheet in Figure 1 was 5 mm thick, it was crumpled like a sheet of paper. The car carrier suffered considerable damage. 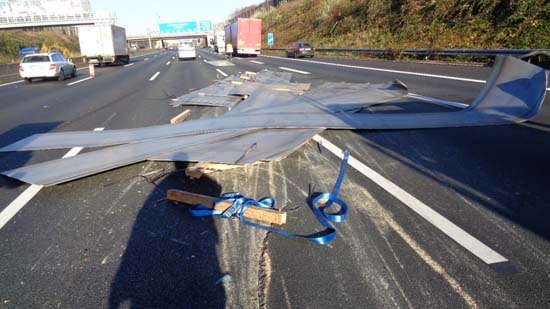 In Figure 2, we can see most of the load lying scattered over the motorway. The light-colored marks on the road surface and the scoring from the impact give an idea of the force with which the load hit the road. Originally bundled with steel straps, the packages of steel sheet are scattered across the road. It was tantamount to a miracle that nobody was injured. 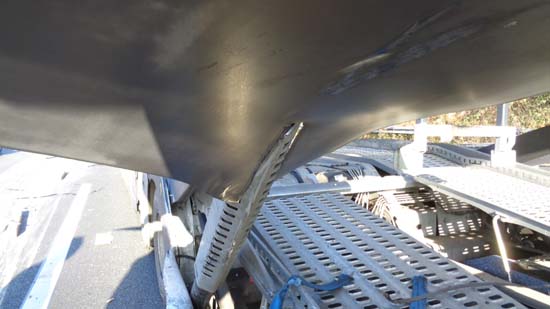 Figure 3 again provides striking evidence of the force with which the steel sheets hit the upright of the car carrier. As we have already said, the steel sheet is 5 mm thick, and it has ripped apart along a length of around 30-50 cm. 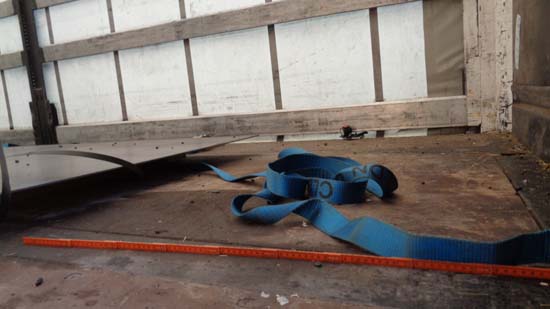 Figure 4 shows the last remaining part of the load on the loading bed, together with a considerable gap in front of the load. According to the report, some of the rest of the load was stacked on top of this sheet. Another thing that this photo shows is that the loading surface is not entirely clean. 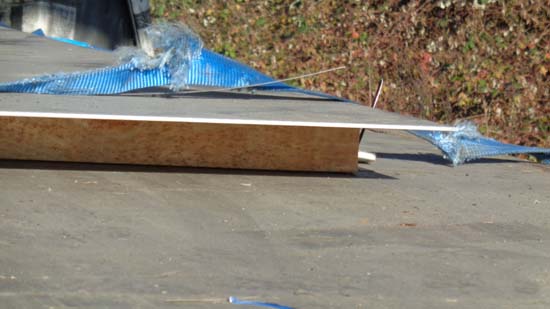 And Figure 5 shows the load and brand new belts that were used to "secure" the load. But, in our opinion, anyone who chooses to speak of "load securing" to refer to this fiasco is seriously misguided. This figure gives an almost palpable sense of how sharp the edges of this load are. And the effects of these sharp edges are soon revealed in all their glory. The belts give the appearance of being brand new and had therefore not previously been damaged in any way. Yet they have been frayed, cut and sliced through in pretty well every conceivable way. Anyone with any understanding of load securing, would have wept blood at the first attempt to tension a belt over this sharp-edged load, as loads like this are guaranteed to cut through an unprotected belt. There is no doubt that all the belts would have been fit for scrapping after this consignment, even if the accident had not happened. 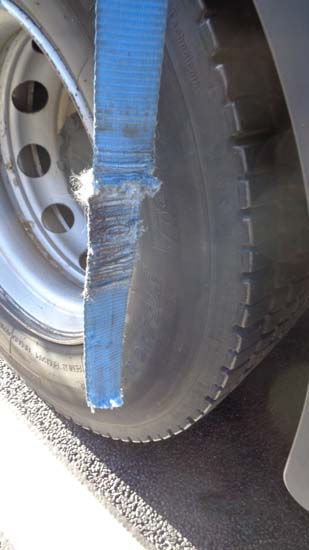 Figure 6 shows a belt that has been cut clean through. And this belt provides a magnificent document of the effects of sharp-edged sheet metal. This belt was completely destroyed in several places until it was useless as it worked against the load, and was almost completely cut through at a second point. We are not particularly surprised that the driver probably tried to secure this load with tie-down lashings. (To make things worse, the load had been resting on dunnage with a square cross-section, but we shall not concentrate on this aspect yet again.)

Using a tie-down lashing with a load as low as this one would undoubtedly result in an angle of less than 30 °. And because the sine of 30 ° is 0.5, 50 % of the securing effect is lost as a result of this angle alone. So let us assume that each belt is pre-tensioned with a force of 500 daN. Because we are ignoring any k-value, we shall assume 1,000 daN of pre-tensioning force for each belt. With 7 belts, this gives 7000 daN total pre-tensioning force. The actual effect, simply taking the angle into account, would be a mere 3500 daN of pre-tensioning force. But, as we all know, tie-down lashings only act through friction, which would have been around 20 % or, if we are generous, 30 % in this case. This would have reduced the securing effect to a mere 1050 daN at most. But a 19.2-tonne load needs an effective securing force of 15,360 daN. Even with the best will in the world, these load-securing measures delivered something like a fifteenth of the load-securing force required plus friction (30 % / 5760 daN). And the 30 % used here is probably extremely generous, as it is likely that the steel sheets in the packages were in direct contact with each other, giving a friction value at that point of just 10-20 %.

But the suicidal use of belts over razor-sharp edges completely invalidated even this low level of load-securing. So it was just a question of time before an acceleration force was experienced that went beyond what would be expected from simply pulling away and braking in normal road traffic conditions. 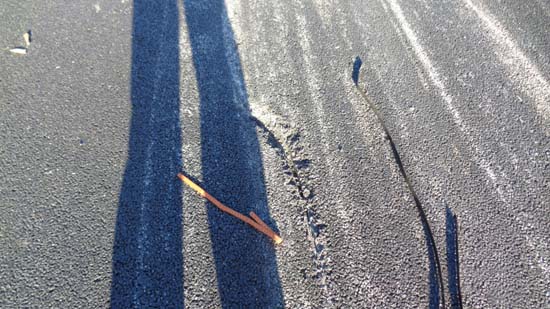 It is not just the fact that the steel sheets crashed into the car carrier, but also the deep scoring they left on the surface of the motorway that make it clear how lucky the other road users were that they did not encounter this load. 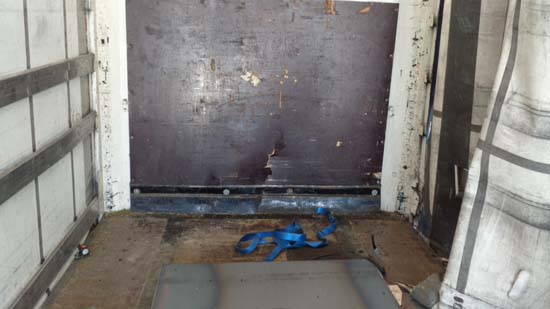 After thinking about it for some time, we were finally able to make some sense of this vertical dent in the end wall. Even if we are moving into the realms of speculation here, we still want to share our thoughts with you. It is probable that one or two of the packages of steel sheets slipped forwards and to the right while the vehicle was swerving. Their front left corner came into contact with the wall (the whitish horizontal marks on the end wall also suggest this, as does the bright metal scuff mark along the bottom member of the end wall). Only then did they fall onto the road. This leads us to the assumption that no attempt was made to secure this load as a tight-fit to the end wall. When dealing with individual packages of steel, it is always possible to use at least some of this good load-securing effect (which is, after all, 5000 daN) after the load has been distributed properly.

It is relatively easy to secure loads like this properly. Given four separate packages of steel sheets, there are several ways to at least partially exploit a good tight fit to the end wall. If the end wall is protected against the sharp edges of the load, it is easily possible to make use of 5000 daN (the vehicle was not Code XL). Wooden dunnage with a rectangular cross-section is used, and anti-slip material is applied or glued to both sides. Anti-slip material is, of course, used between the individual steel packages and, if the packages do not have steel bands around them lengthwise, load-securing equipment must also be used here to improve the poor unitization.

All the load-securing equipment must be protected by appropriate edge protectors, and these must be suitable for use with sharp-edged steel loads. Theoretically, the friction provided by the anti-slip materials is sufficient to secure the load to the sides, and it ought to be enough to use a few tie-down lashings to provide minimal securing. But the weight of the load and the fact that it is notoriously dangerous mean that we would like to use loop lashings. Given these long sheets, the effort involved is not significantly more than for minimal securing with tie-down lashings. The loop lashings would secure the steel sheets absolutely safely to the sides. In the event that it is not possible to incorporate the securing effect of the end wall in the securing plan, the weight of this load would require a further 3840 daN of securing force to the front. This can be achieved with just one loop lashing (provided that it is attached at a very favorable angle). If the positions of the load-securing points and the load do not permit an ideal angle to be achieved, two loop lashings can be used to secure the load adequately against forward movement.

Again, we want to stress that all the load-securing equipment, whether it be chains, belts, or wire ropes – must be protected against the sharp edges of the load at all costs! If chains or wire ropes are used, it is also necessary to protect the load against the load-securing equipment. Anti-slip material must be used in such a way that there is an effective friction bond between all elements of the load and between the load and the loading surface. In other words, the elements of the load must not be in direct contact with each other or with the loading surface or the dunnage. Instead, all points of contact must be through the anti-slip material. Only then is it possible for this anti-slip material to reliably deliver the desired friction-enhancing effect.

It gives us cause for concern that some loader actually sent this poor driver out onto the roads with this suicidal load.

It is our sincere wish that all loaders will take their responsibilities seriously in future! Are they not the most important people in the entire load-securing chain? If they do everything properly, nobody will have any problems with the load: neither the driver nor the owner nor other road users.

Having started this year in such spectacular fashion, we wish all our readers well secured loads and safe, accident-free journeys at all times.