The term "piggyback" is usually used in the context of intermodal transport by road and rail. Semitrailers, complete with wheels are loaded onto well cars, and the train carries them for the majority of the journey. 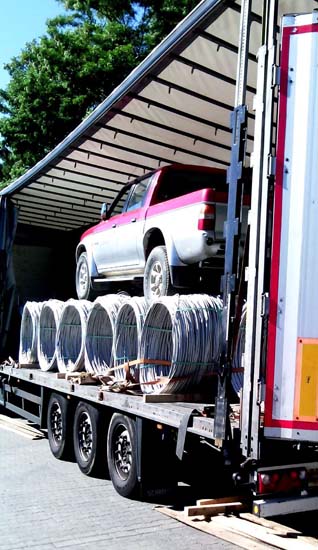 The type of piggyback that we see in this photo is something very special indeed. According to the statements made by the police officers who carried out the inspection, the stainless steel coils were well secured. Because the primary load only weighed 21.5 tonnes, the 1.8-tonne pickup was unproblematic as an additional load on the coils. Provided that the coils on which the pickup was loaded formed a "loading bed" that was capable of bearing this load, and provided that the pickup was secured with due care and attention, there is actually nothing to object to with this kind of piggyback transport. We nevertheless wonder whether the manufacturer of the coils and in particular the recipient approved of their load being used as an artificial loading bed in this way.

The conspicuousness of this piggyback consignment only served to uncover a different infringement. After the inspectors had had a closer look at the vehicle, they found that one of the brake systems was in a dire state. Once the brakes had been scrupulously serviced, the vehicle was allowed to continue on its way.