Airship on the road

Once upon a time, around carnival time, there was a truck that had always wanted to be an airship. To be lighter than air and float gently to its destination; this was its long-held dream. No sooner said than done! The cargo area was loaded with more than 900 helium-filled balloons that were clearly on their way to a carnival event. The police officers noticed the vehicle because of the strange way it floated along the road like an airship. At this time of year (as we said, it was carnival time), they immediately suspected a case of drunk driving. On opening the cargo area, they saw nothing but balloons. And weighing the vehicle showed that it had an axle weight of just 111.11 kilograms. It is not really possible to speak of this vehicle as being overloaded. Although it already had a full load of helium balloons, the vehicle had to take on an extra few crates of beer before it was allowed to continue on its way. 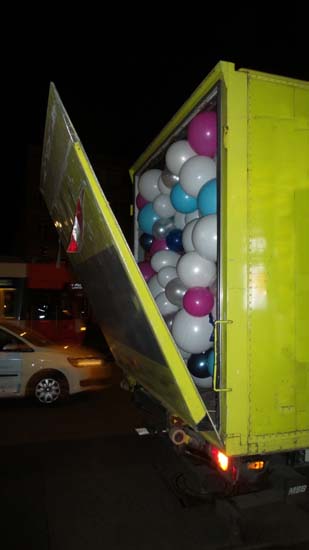