The more valuable the load, the better it is secured 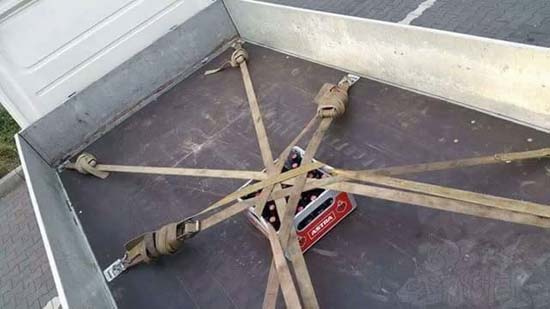 The value of a load will often increase depending on its availability. If diamonds were as common as sand or gravel in this country, their value would undoubtedly be low. If the working day is drawing to a close and you want to spend a convivial evening with colleagues over a few beers, but the nearest shop is a good few miles away, the value of a crate of beer rises dramatically.

And if this crate of beer is to be transported safely to the chosen venue, some people will stop at nothing to ensure its safety. We have decided to call this securing method "spider securing". Tie-down lashings have been laid on top of each other like a spider web. But it doesn't stop there: To be absolutely certain that the load was safe, the person responsible for securing it then threaded the belts through the beer crate several times. And this resulted in a sort of direct lashing, that at least looks impressive. In reality, there are only 4 tie-down lashings, but the fact that some of the loose ends of the belts have been passed over the crate and again elegantly threaded through the crate makes this securing operation a truly magnificent spectacle.