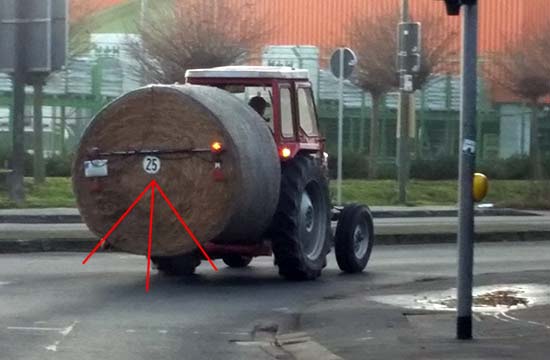 A round hay bale like this is an impressive sight. Particularly if you are transporting it so swiftly. In terms of road traffic regulations, everything seems to be just fine: The bale is flashing and all the lights and so on seem to be in place. There is even a license plate displayed prominently on the bale. And yet, it is not a sight that will immediately appeal to all. We shall take a look at this scenario from the perspective of load securing.

There is a tight fit to the front. Excellent!

Things seemed pretty lousy to the sides. We enlarged the image and attempted to approach the problem with a drawing. We drew a vertical line from what we took to be the center of the bale and then drew lines to the two tipping edges, the shafts, on which the round bale is resting. The resulting angle is important. On our hand-drawn sketch, the angle is 32 ° on the left and 33.5 ° on the right. On the drawing that we are publishing online, the angles are 38 ° and 37 °. We have taken the lower of these values to assess how well the load is secured to the sides. 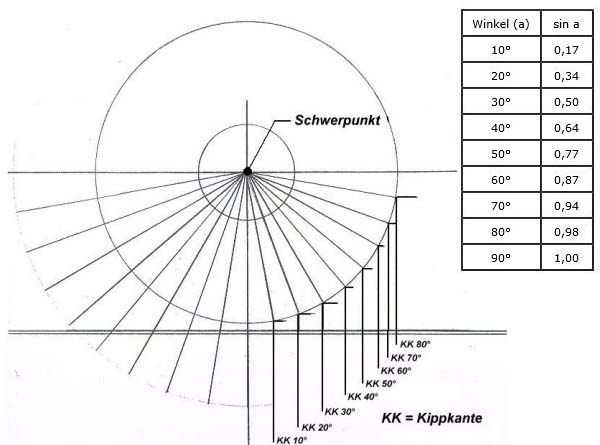 We have provided a small diagram to illustrate the issue. 30 ° (sin 30 ° = 0.5) corresponds to "tight fit" securing to the side of 0.5 or 50 %. Since we measured 32 °, there is no problem with the securing of the load to the side. We would probably like to see a belt taken over the top of the bale to prevent it from bouncing out.

The way in which the load is secured to the rear seems to be rather more problematic. Hay and synthetic fabric on bare, round steel shafts will probably have a coefficient of friction of 0.1 or 0.2. For our purposes, we shall assume a coefficient of friction μ of 0.2. This means that 0.3 or 30 % of the necessary securing force is still needed to the rear. Although the shafts are tilted forwards slightly, we are not convinced that they are tilted enough to deliver the securing force that is still needed. And so we would like to see a belt around the middle of the bale to prevent it from slipping backwards.

Essentially, the shape and stability of round bales (whether of hay or straw) vary so much that it makes little sense to waste much time on theoretical calculations. The belts that we would like to see undoubtedly make sense in the majority of cases. There may well be exceptions, but a little more security in such cases would not be too much of a burden.

The people who thought up this transport system also thought about load securing. The method of transport was safer than we had first assumed, but it could still be improved.