People who have to transport and secure scaffolding do not have an easy job. Although there are companies that have purchased special frames for loading scaffolding, some of which even have their own end wall, this remains the exception rather than the rule. Although some people may see this attempt to load the scaffolding as somewhat idiosyncratic, we want to take a close look before coming to a conclusion. 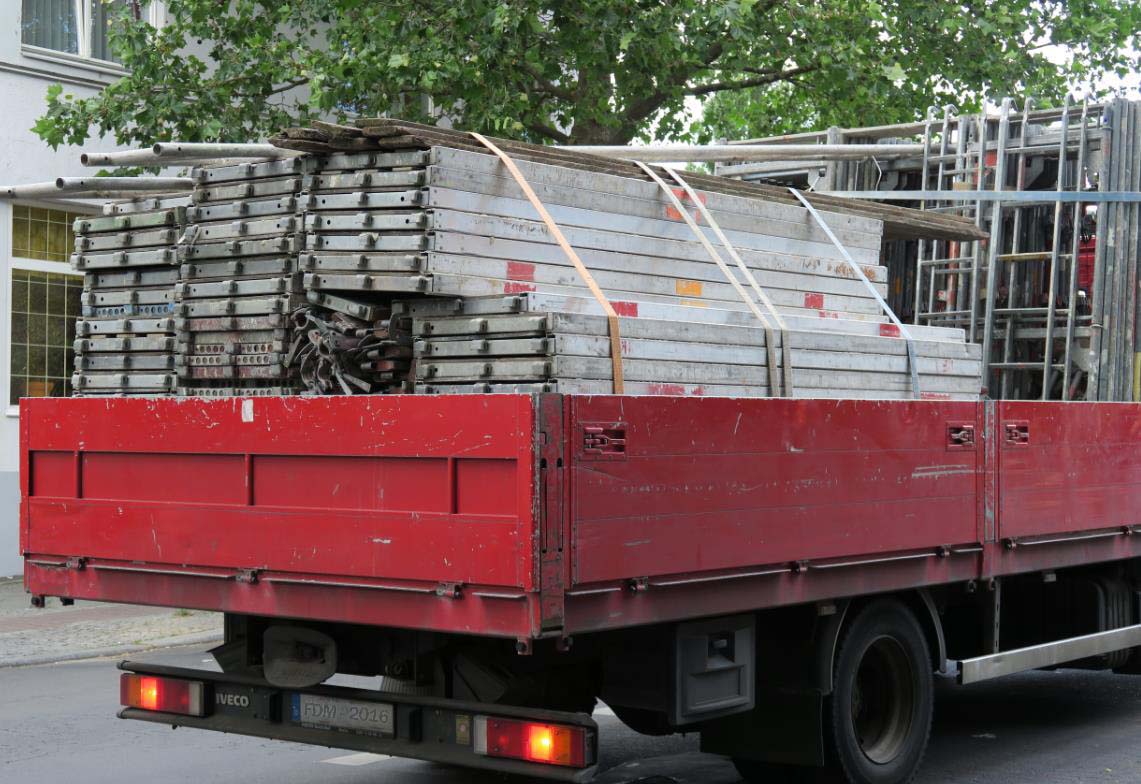 There are about 61 scaffold boards in the load, and they have been stacked so cleverly that they form a "nest" for the scaffold poles without creating a gap in the load for the purposes of the securing method used (tie-down lashing). The boards that have been placed on top are below the tie-down lashings. This may be good, but is not necessarily so. We would have preferred to see them on the loading bed, but we do not know whether there was sufficient space there. The scaffolding elements at the very top of the load were hooked over the part of the load that was standing on end at the front, and at the back they were (almost certainly) also secured by the tie-down lashing. Although you would not find this in any manual or guidelines, there are no issues with it in respect of securing the load.

On the securing of the large load block:

Unfortunately, we do not know the exact weights, so we have assumed that each board weighs 40 kg, giving a total weight force of around 2440 daN. We can happily assume a coefficient of friction μ of 0.4. Although this only applies for rough-sawn lumber, scaffold boards are often covered with mortar residue (as is the case here). Our own (non-reproducible) trials with materials like this have even yielded a coefficient of friction μ of 0.5 to 0.6.

Readers who have read this far undoubtedly have a great deal of interest in load securing and will have noticed that we have not taken account of the scaffold poles in their "nest". Correct. On the basis of the photo alone, we cannot say how heavy they are and whether or not they are interlocked in such a way that no individual pole can escape backwards. Experience tells us that the poles only very rarely interlock in such a way that none of them can slide out. In order to ensure that they were also secured by the tie-down lashing, a plank was laid at an angle across the loose elements. The stack of planks on top of this collection of scaffolding poles and boards is also pressing down on them. That was a good idea, or it may have been mere chance. But if these parts slip together as a result of the motion of the vehicle, the top right stack of the load would drop a little lower and this would cause the pre-tensioning force to be lost immediately. This is a serious error and needs to be corrected.

Conclusion: This load was loaded and secured intelligently and with an understanding of the issues. Unfortunately, the pre-tensioning force was not quite sufficient to secure the main stack of scaffolding boards. And we should not forget the poles in the middle of the load that we ignored for the purposes of our calculation. It was a smart idea to try to secure the loose elements with an oblique plank, but sadly the idea risks losing pre-tensioning force, and thus undermines the entire load-securing concept.