A slippery slope of steel

As people who are closely connected with the issue of load securing and, to a certain extent, with the inspection of loads, we often encounter the argument "why bother securing a load to the rear?".

And with this Photo of the Month, we have an excellent example of why loads need to be secured to the rear.

But let's start with the raw facts: 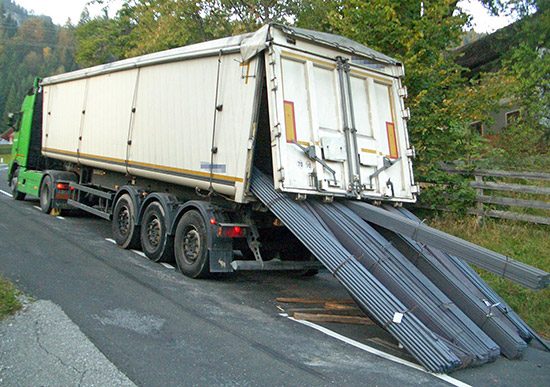 One's first reaction could be to glance at this photo and simply say that a load such as this has no right to be on a bulk cargo vehicle, which is, of course, not equipped with load-securing points.

But any of our regular readers will know that we are not going to just leave it at that. Instead, we want to have a good look at all the aspects of this incident. And indeed, the vehicle used here is one that is designed for carrying bulk cargo, and is perfectly suitable for transporting gravel, sand, wood chips and so on. In other words, materials that can be poured. Anyone who has had the opportunity to experience the practical side of load securing will know that any load-securing points that might be fitted on vehicles like this will be completely clogged with the residue of previous loads and can only be freed up with a hammer and chisel.

But vehicles like this are occasionally empty, and are capable of carrying heavy loads. So why shouldn't we think about beefing them up to carry steel as the occasion arises? 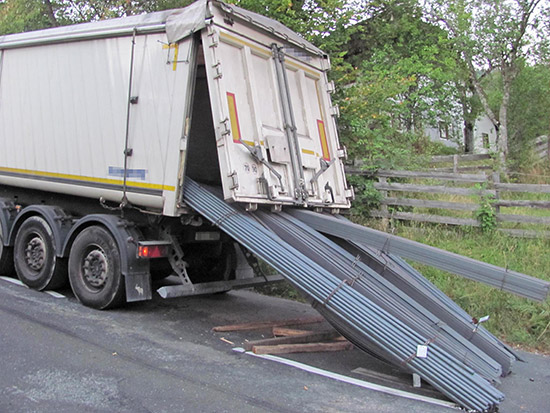 But before we consider the misuse of bulk cargo vehicles, let's have a close look at what these pictures have to say to us. The vehicle was carrying 25 tonnes of flat and round steel bars that had been bundled or lashed together with annealed wire. This is a common way of transporting flat and round steel rods in bundles. Wood was placed under the steel, to allow lifting gear to be attached and to permit the lifting gear to be pulled out after the steel had been loaded, or perhaps in order to increase the level of friction. 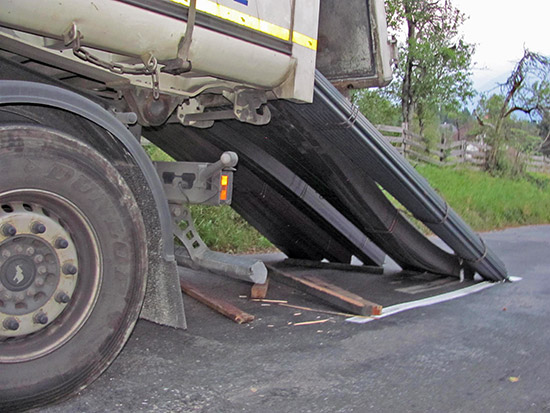 And this is what has happened here. The vehicle was on an incline; the driver may have missed a gear, causing a jolt in addition to the sloping surface. With the help of the happily rolling square dunnage, the steel started moving until it came to the tailgate. The tailgate could not resist the steel's break for freedom and opened up, at which point the steel tipped into the road.

Fortunately, nobody was driving close behind the truck, so that the "only" damage was a complete road closure and major disruption to traffic. The tailgate probably also suffered some damage when the steel made its break for freedom.

The right way to secure the load

If anyone seriously considers using a bulk cargo vehicle for transporting flat and round steel bars, the vehicle must be fitted with load-securing points. Otherwise, it cannot be done.

When loading the cargo, it is imperative that only dunnage with a rectangular cross section is used. The big advantage of dunnage with a rectangular cross section is that it does not roll. Both sides of this rectangular dunnage can be covered with anti-slip mats or have anti-slip material permanently attached, so that the high level of friction provided by the rubber is transmitted from the absolutely clean loading surface to the wood and from the wood, through the rubber to the steel.

In addition, steps should be taken to ensure that the steel cannot escape from the bundles. Tie-down lashings must be used to ensure that the high level of friction provided by the anti-slip material is permanently available. And, as load-securing columnists, we would further recommend bundling the load again at least twice using load-securing equipment (bundling straps). This compacts the load, promotes internal friction and gives the load more stability as a unit.

If you actually want to secure a load like this with tie-down lashings and use appropriate anti-slip materials with a coefficient of friction μ of 0.6, it is still necessary to secure at least 20 % by means of pre-tensioning force, at least in the direction of travel. At a load weight of 25 tonnes, this 20 % or 0.2 represents 5000 daN of securing force that still needs to be provided. If we now divide this 5000 daN by 0.6 (friction), we get a total of 8333 daN of pre-tensioning force that is still required.

If we imagine loading a cargo like this in such a vehicle, the cargo will be very low in the vehicle, and the angle to the load-securing equipment will be about 30 degrees (which is, of course, only a rough approximation). At an angle of 30 degrees, the total pre-tensioning force required would need to be doubled, resulting in a pre-tensioning force of 16,666 daN.

Anyone who thinks that this amount of effort, plus the bundling mentioned above, is somewhat excessive may come to the conclusion that transporting the load in this way does not make a great deal of economic sense. After all, 17 tie-down lashings (at an STF of 500 daN) would have to be attached to 34 load-securing points and tensioned with long-lever ratchet handles, not to mention at least two bundling straps around the load. And then there is the rectangular dunnage, covered with anti-slip material on both sides.

We are unaware of whether load distribution considerations allow one to place the load against the end wall of a bulk cargo vehicle and whether or not this is permitted. Our intuition tells us that if this is the case, the end wall would have to be protected against the cargo with huge amounts of wood to allow the cargo to be loaded up tight.

Securing a load to the rear is important!

The effort involved in securing to transport steel safely in a bulk cargo vehicle is so great that we would at least think very hard about whether we actually wanted to do it. Sadly, physics sometimes puts limits on economic considerations, and if these limits are ignored, the result can be an accident like this one. We hope that those who have in the past not paid enough attention to securing loads to the rear will do so in future. In which case, this accident will at least have served some purpose.